Today I’d thought I’d share the best way to preserve fresh corn, and whether uncooked corn should be refrigerated.

Generally, uncooked corn should be refrigerated. Corn will last longer in the fridge.

However, corn does not last very long when kept refrigerated.

Generally, it will last 2 to 3 days and a week at the most.

The best method to keep corn is to blanch it and then freeze it.

Today, I will share how to tell when corn is bad, whether you can eat bad corn, and what corn smells like when it’s bad. As well as, cover the best ways to preserve corn.

To show how corn changes as it goes bad, here’s a timelapse of a cob of corn left at room temperature.

Go to top
Table Of Contents show
1 What Happens if You Don’t Refrigerate Corn?
1.1 The best way to keep fresh corn the longest – blanch it and freeze it
2 How Can You Tell if Corn Has Gone Bad?
3 What Does Corn Smell Like When It Goes Bad?
3.1 How to tell when corn is ripe?
4 What Happens if I Eat Bad Corn?
5 Can You Freeze Corn on the Cob Raw?

What Happens if You Don’t Refrigerate Corn? 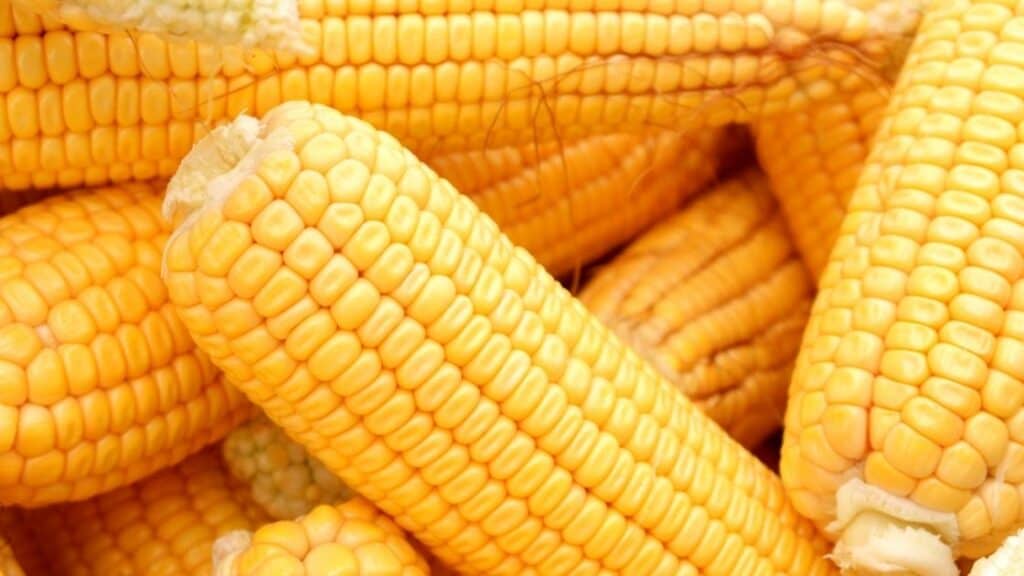 I love eating corn when it’s in season.

But, I was wondering how well it holds up when stored in the pantry, fridge, and freezer.

So, I looked into what happens to fresh corn when kept in the pantry, and here’s what I found.

Within about 2 days it will discolor and turn light brown, and the spaces inbetween the kernels will get bigger as the kernels shrink.

Within about 5 to 7 days the kernels will shrink and most of the corn will be light brown in color and look very unappetizing.

Root vegetables will keep for a very long time compared to other vegetables.

Often 6 months or more when left in a cool, dry, dark place.

But, corn is similar to other vegetables such as celery, tomatoes, and cucumber which tend to go bad after a week at room temperature.

But, can last up to a month in the refrigerator depending on how ripe they were when they were harvested.

After that time they start to shrivel, leak water which forms as a pool underneath, change color, become softer, and lose their flavor.

It’s possible to freeze the whole ear of corn and leave the husk on.

Doing it that way they will still be good after about a month or two.

However, when defrosted it can turn a bit mushy.

To avoid this it’s best to blanch it first before freezing it.

But, if you’re wanting to keep them longer then blanching them is definitely the way to go.

This also preserves the sweet taste.

As you may know, blanching is a cooking technique where the food is boiled for a short amount of time.

A method that works well is to remove the husk and clean the corn.

Then pop them in boiling water for 3 to 4 minutes

. Or bring a pot of water to boil with the corn in the water.

If the ears of corn are particularly large then blanch them for a minute or so more.

Because of that, you may need to boil ears of corn separately based on if they are all different sizes.

This is a bit easier than pulling out the smaller ears of corn early.

You can freeze the whole ears of corn without removing the corn from the cob.

But, it saves freezer space if you remove the corn from the cob using a knife.

After it has been blanched, let it cool to room temperature.

Then put it into airtight containers, a plastic bag, or vacuum seal it before putting it into the fridge.

Canning it in glass jars is another good option.

How Can You Tell if Corn Has Gone Bad? 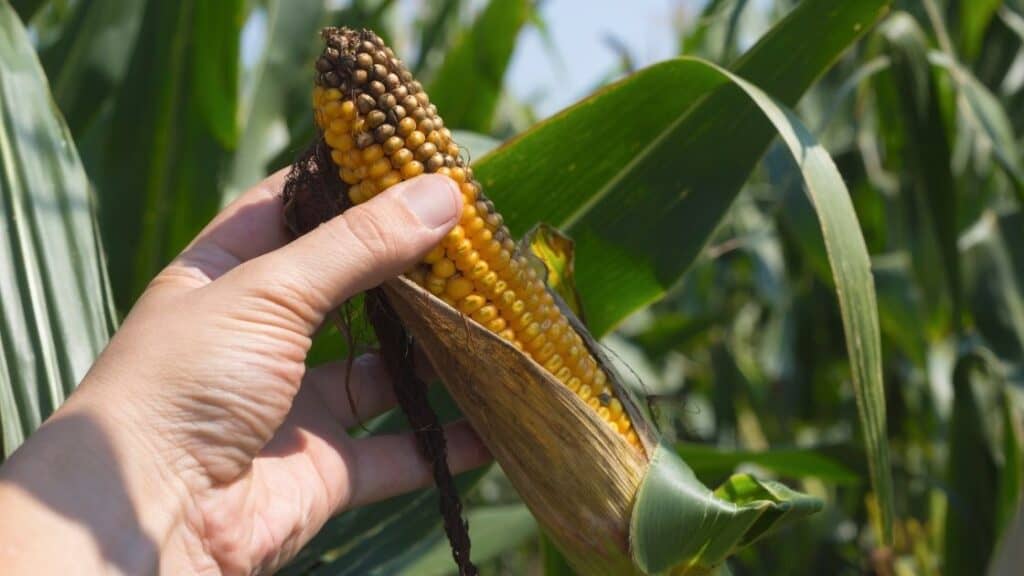 Corn left at room temperature will go bad at about the same rate as other vegetables.

But, how can you know that corn has gone bad?

Here are the signs to look for.

Corn will develop discoloration where it won’t be yellow but rather brown, and mold will begin to grow on it.

It will also develop an unpleasant odor that can have a sour, vinegar smell to it.

Also, the kernels shrink and there will be visible spaces in between the kernels.

It’s generally not safe to eat food that has mold on it, and it can cause an upset stomach, diarrhea, vomiting, and nausea.

But, fermented corn is often used in recipes. One such is what’s called Kānga pirau.

Translated it means ‘rotten corn’. It’s a tradition of the Maori people of New Zealand.

The corn is left in a basket in a cold river for a few weeks.

When they’re ready they will sink to the bottom of the basket.

It’s then removed from the cob and ground into a paste and eaten like porridge for breakfast.

Cornflakes are also a common breakfast, and many people wonder if it’s healthy.

I explained if they are in this article about whether cornflakes are a healthy breakfast.

As well as, if they’re healthy to eat at night, and whether you should eat them every day.

What Does Corn Smell Like When It Goes Bad? 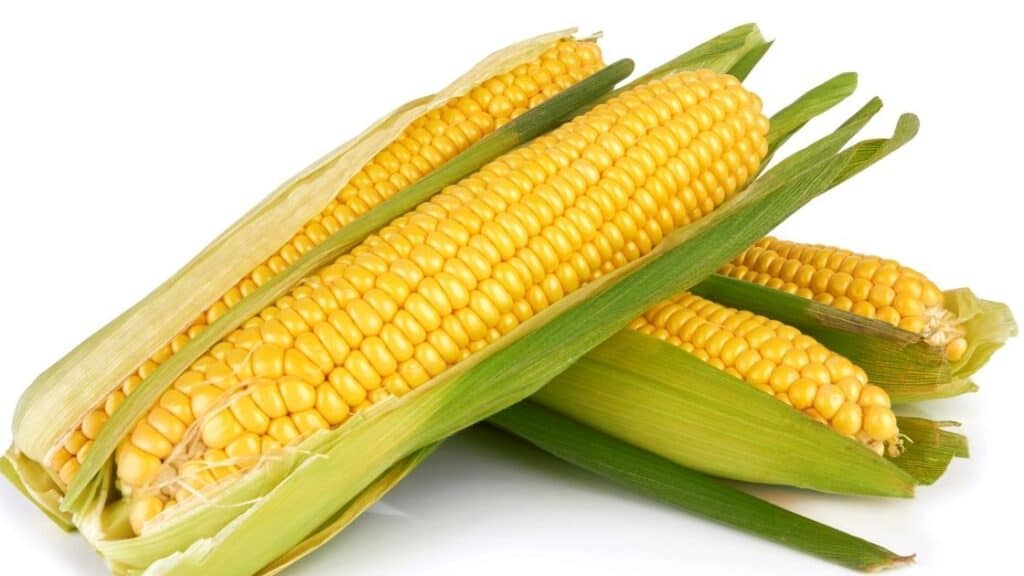 Certain foods will develop a bad odor when they’ve gone bad and you shouldn’t eat them.

But, I was curious if this is also the case with corn, and if it develops a smell when it goes bad.

Overall, it will have a mouldy, sour, unpleasant smell to it.

The mold smell comes from mold that is growing on it and should be visible on the surface.

The sour, vinegar smell comes from the corn fermenting as the sugars break down into alcohol.

Cooked corn such as canned corn will develop mold on the top, and have a rancid smell to it when it’s gone bad.

Fresh corn on the cob will generally discolor a lot at the same time it goes bad.

Instead of yellow the kernels will turn light brown in color.

When corn turns that color, it’s best to throw it out.

How to tell when corn is ripe?

Sweet corn is harvested when the bunch of fluff on the end turns from white/yellow to brown.

Corn can also be inspected while it’s still on the corn plant by opening the husk a little bit and looking at the kernels.

They’ll be a light yellow color.

However, just because it’s light yellow in color it might now be ripe.

To know if it’s ripe you can dig your fingernail into it, and a white sap will come out.

Potatoes are another vegetable that you may want to preserve for longer.

Many people wonder if you can freeze potatoes raw.

I explained the best way to freeze potatoes in this article about whether you can freeze whole potatoes.

What Happens if I Eat Bad Corn? 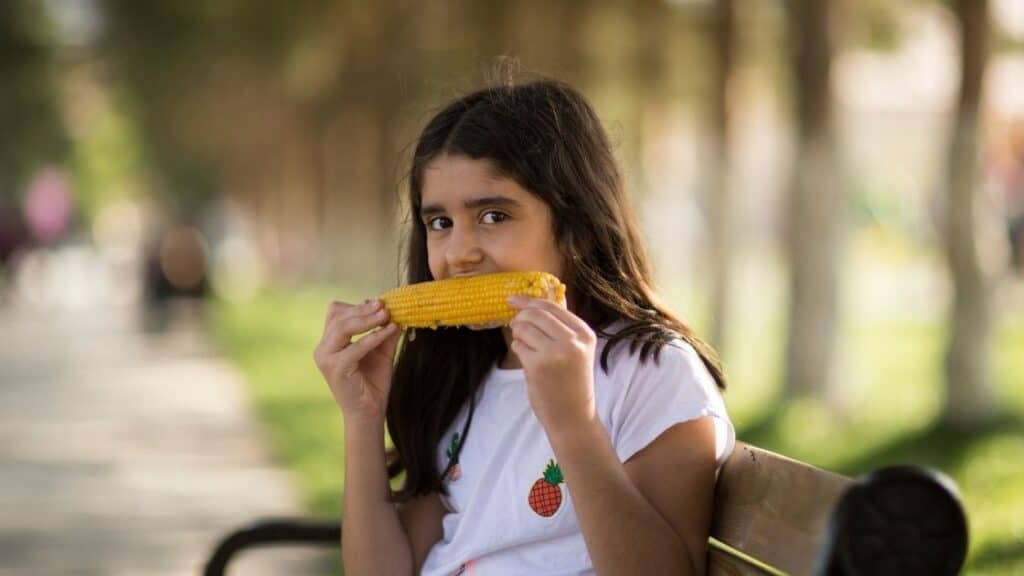 Corn tends to go bad fairly quickly, and I was interested in whether you can get sick from eating bad corn.

I looked at the advice of medical professionals and here’s what I found.

It can cause stomach ache, diarrhea, vomiting, headaches, and nausea.

Generally, if corn has turned brown, and begun to shrink it should be discarded.

Also, if there is any mold growing on it, you should not eat it.

As a general rule, when corn should not be consumed it will have an unpleasant taste and smell.

Corn is rots and goes bad at about the same rate as other vegetables, except for root vegetables.

There are various ways to preserve corn.

The best is to freeze it, or can it.

Canning corn requires specialist equipment which most people don’t have.

But, freezing it is very easy to do, and blanching it first will improve the taste and texture once it has defrosted.

Therefore, storing it by vacuum sealing is a very good option.

As well as, keeping it in the fridge.

But, even in the fridge, it will go bad within a few days to a week.

Can You Freeze Corn on the Cob Raw? 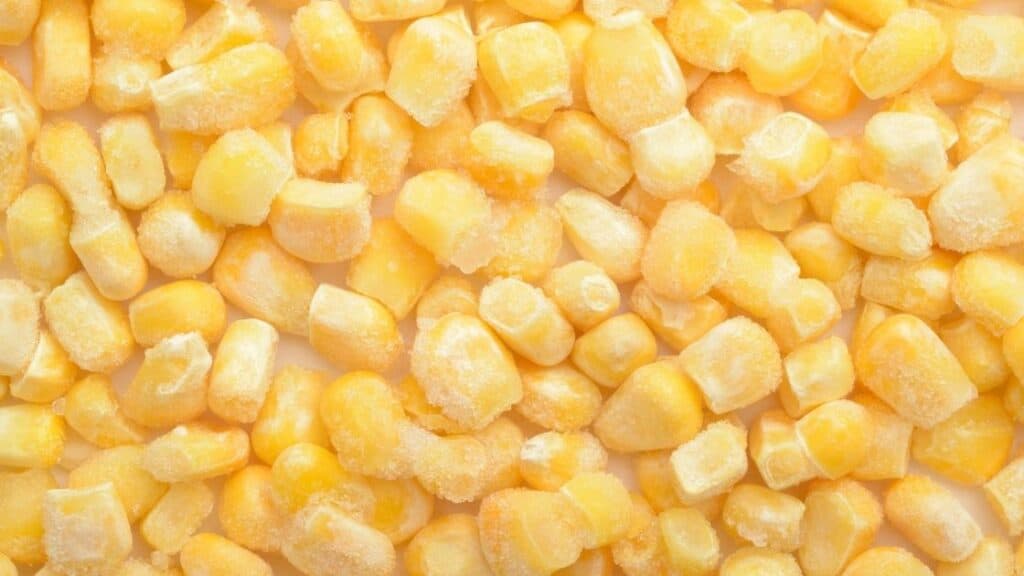 Freezing fresh corn is a great way to keep it for many months rather than a few days when it’s kept fresh.

But, can you freeze fresh corn on the cob?

It’s perfectly fine to freeze corn on the cob raw.

However, the texture and taste are better if you blanch it first.

This involves removing the husk from the corn and boiling it in water for 3 to 4 minutes.

Then, put it into a plastic bag, or vacuum seal it before putting them into the freezer.

Raw corn on the cob lasts about 1 to 3 months. But, blanching corn is a better option if you want to keep it for longer.

To save the most space in your freezer remove the corn from the cob first.

As the cob makes up most of the corn on a cob.