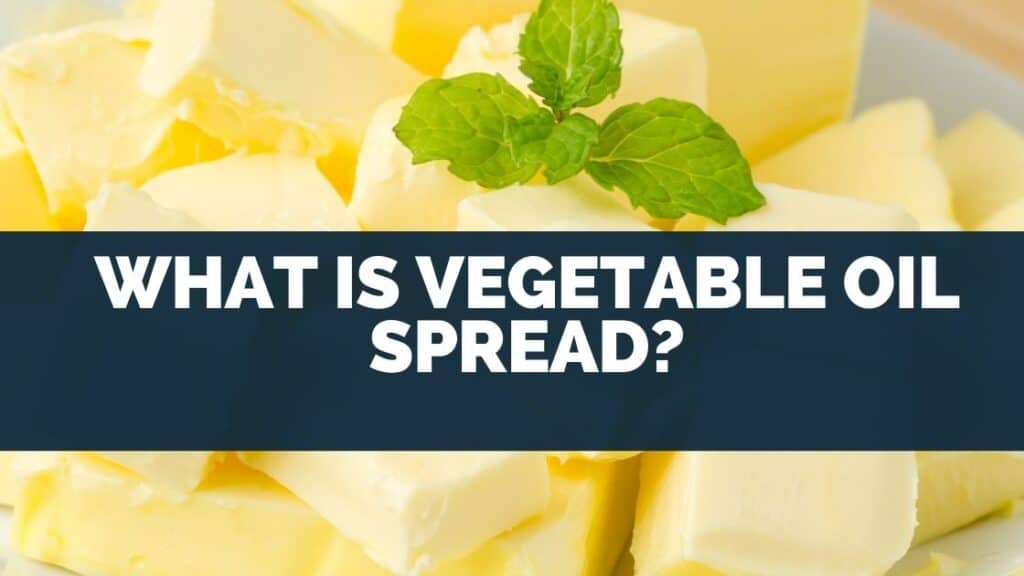 I really like eating butter and using it in many recipes.

But, I’ve also wondered about vegetable oil spread as a good substitute, which I have eaten from time to time.

I generally prefer the taste of butter but I was curious exactly what vegetable oil spread is so I did some research and here’s what I found.

Vegetable oil spread is a food made from vegetable oil and a few other simple ingredients that differ based on the brand or how a person makes it.

It’s consumed on baked goods or used as a butter replacement.

In this article, I will explain exactly how it’s made, whether it’s healthier than butter if it’s bad for you.

Additionally, I’ll explain what the healthiest spread is. 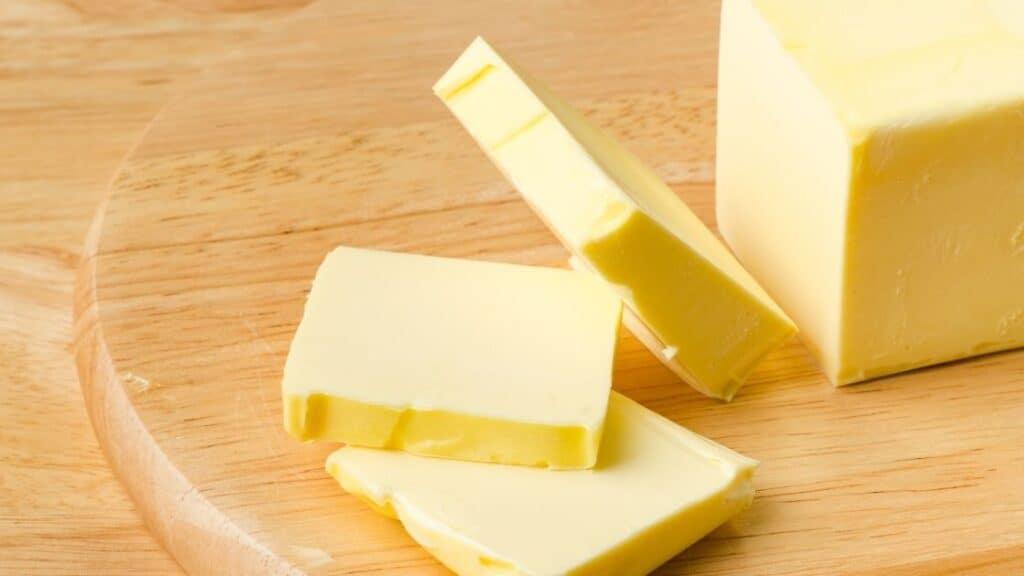 Butter is known to be high in fat and calories, as well as other nutrients.

So, I was curious whether vegetable oil is healthier than butter. Here’s what I found.

They both have about equal amounts of other beneficial nutrients.

But, vary a lot in what nutrients they contain.

I’ve compiled a table that shows a comparison between vegetable oil spread and butter.

It shows how much of each nutrient vegetable oil spread and butter contain as a percentage of the recommended daily intake (RDI).

The percentages are based on the amounts per half a cup (100g).

Which is quite a large serving.

In an average meal, a person would likely eat about half that at the most.

But, if they eat a significant amount of cookies or cake made with butter or vegetable oil spread then these amounts would be about average.

As you can see from the table, butter and vegetable oil spread differ quite a bit in terms of what nutrients they contain.

For example, vegetable oil spread contains 28.85% of the recommended daily intake of vitamin B-6.

Whereas, butter does not contain any.

However, for some nutrients, they are very similar such as:

Overall, the major difference is how much fat they contain.

And vegetable oil spread contains significantly more – about 3 times as much as butter.

How do butter and vegetable oil spread differ in how they’re made?

The main difference is the base ingredient used to make it.

Butter, as you may know, is made from cream.

The cream is simply whisked until it turns into whipped cream.

And then it continues to be mixed until it becomes thick and turns into butter.

The more it’s mixed the thicker it gets.

At room temperature, it’s quite soft, but in the fridge, it goes very hard.

Vegetable oil spread, also called margarine, on the other hand, is made by mixing vegetable oil with other ingredients.

For example, one way of making it is to use an oil that is solid at room temperature such as coconut oil and to mix it with other oils to thin it out and make it softer.

And egg yolks are also used to turn the color from white to a light shade of yellow.

Here’s a quick video that shows one recipe for how it’s made:

Many people wonder what the difference is between different kinds of oil like olive oil and vegetable oil.

And whether they’re made the same way.

I explained the major differences between olive oil and vegetable oil, and whether you should keep them in the fridge.

Is Vegetable Oil Spread Bad for You? 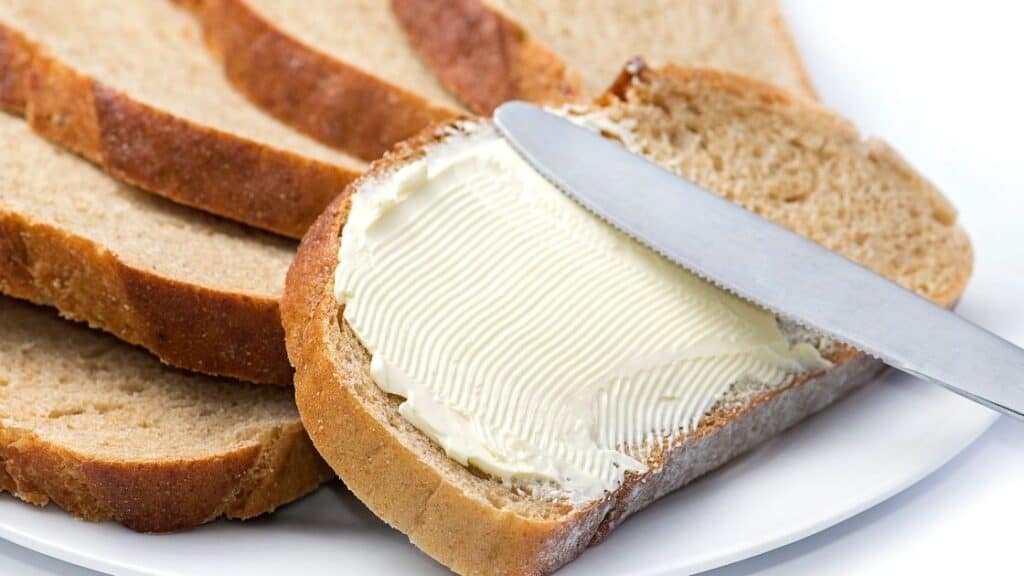 I have heard various people say that both vegetable oil and butter can be bad for you.

Since I’m quite a health-conscious I wanted to see if vegetable oil spread is bad for you for some reason.

Here’s what medical professionals say about it.

Vegetable oil spread is bad for you in large amounts.

It contains a high level of fat.

Consuming multiple or large servings can lead to health complications.

According to Harvard Medical School, consuming more than the recommended daily intake of saturated fats found in vegetable oil spread is correlated with heart disease.

Which is one of the leading causes of death.

Therefore, it’s best to only apply a very thin layer.

And to be aware of how much you consume when it’s used as an ingredient in baked goods.

An average cake or batch of cookies requires about ½ a cup of butter.

So, if you’re going to use vegetable oil spread instead of butter, then a whole cake will contain 335% of your recommended daily intake of fat.

Or, roughly 3 times the amount you should eat.

Although I’ve rarely eaten a whole cake, eating a few slices can bring you pretty close to the recommended daily intake.

When you combine that with other foods you eat that contain fat, you shouldn’t consume more than one serving of cake or cookies per day.

And if you use it on bread, muffins, or scones, it’s best to only apply a thin layer.

If you’re unsure how much to use exactly, measure out half a cup, and aim to only consume ¼ of that per day at the most.

What Is the Healthiest Spread to Put on Toast? 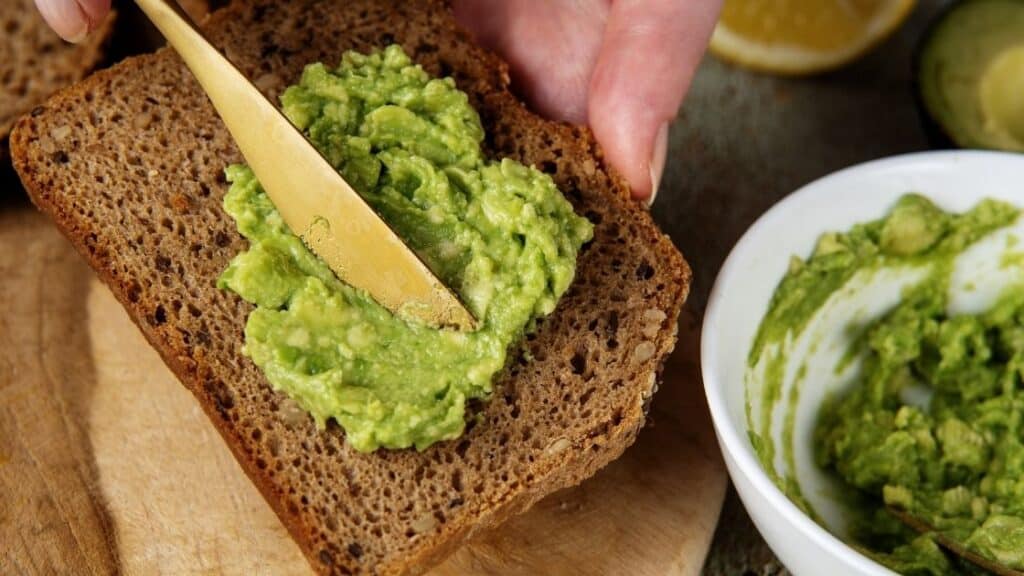 There are a few different options for spreads on toast. Such as peanut butter, jam, and marmalade.

But, which is the healthiest?

Overall, avocado is the healthiest spread to put on toast.

It’s all-natural and is high in many beneficial nutrients.

Others that are a close second are peanut butter, hummus, honey, and olive oil.

Butter and margarine are also reasonably healthy, but they aren’t the healthiest.

In some parts of the world, especially in Australia and New Zealand marmite or vegemite is a very popular option.

However, these spreads are quite high in salt.

It has been shown that 1 tablespoon of marmite or vegemite contains 21% of your recommended daily salt content.

Spreads that should generally be consumed only in small amounts are those that are high in sugar such as chocolate spreads like Nutella. 2 tablespoons of a chocolate spread is equivalent to roughly the average recommended daily intake of sugar.

When combined with other foods you’ll normally eat on a typical day, it’s very likely you’ll consume too much sugar per day.

However, if you otherwise are vigilant about how much sugar you consume, eating chocolate spreads in reasonable amounts is perfectly fine.

What Are the Worst Foods for High Cholesterol? 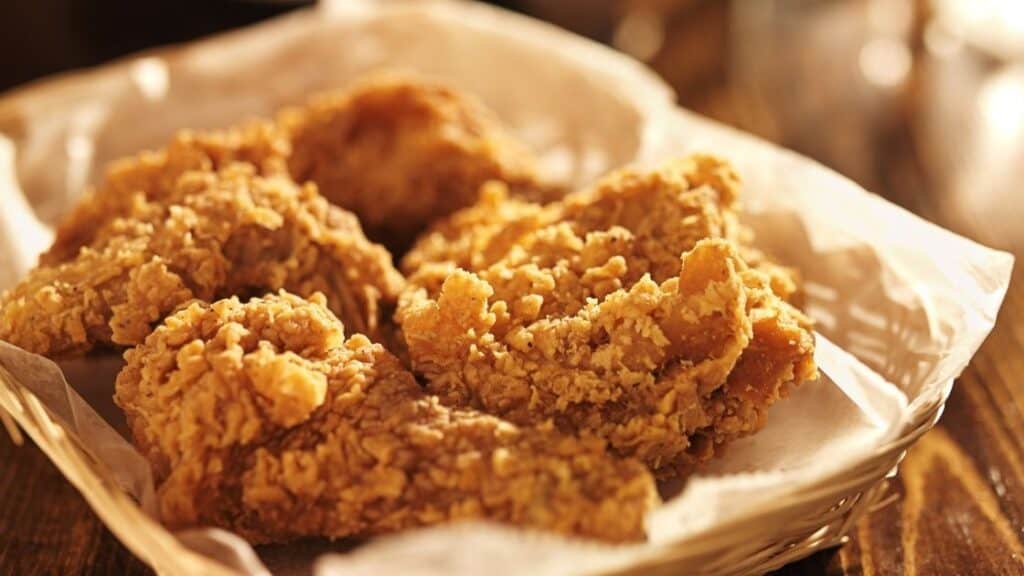 Various foods are better or worse for your cholesterol.

And when a person has high cholesterol it’s important to know what foods are good, and which are bad.

So, here’s what the worst foods are for high cholesterol.

Fried foods, foods with added sugar, highly processed meat such as salami, margarine, shortening, and fatty cuts of meat are the worst foods for high cholesterol according to dieticians.

In small amounts, they are perfectly fine but they should be avoided where possible to lower cholesterol.

Also, alcohol such as beer and spirits are bad for high cholesterol.

By contrast, foods that are good for high cholesterol according to nutritionists are:

Interestingly, there are an incredible amount of fruits and vegetables, which are also high in fiber which is good for your digestive system.

I took a look at what the most popular fruits are.

I summarized it in this article about how many fruits and vegetables there are.