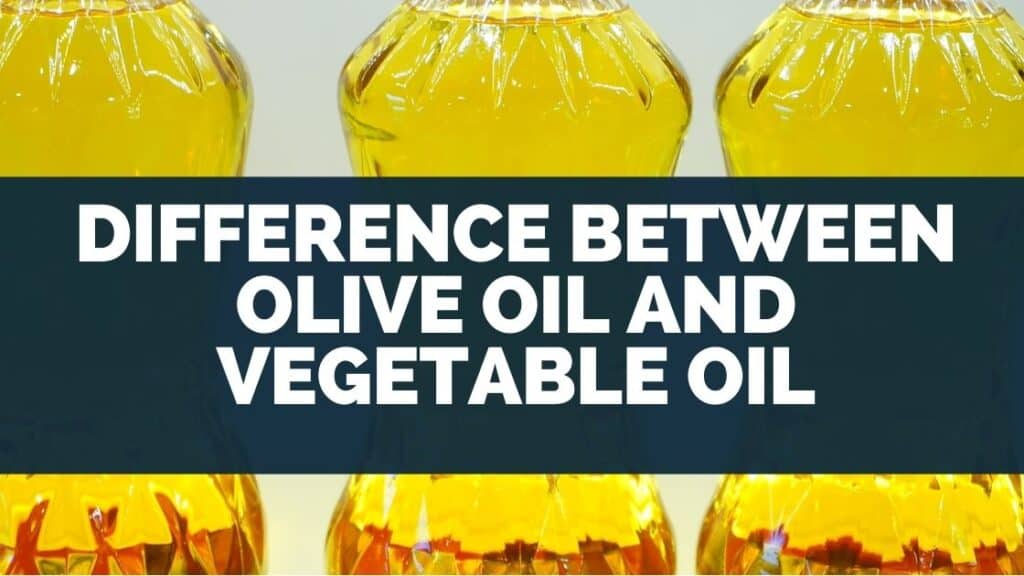 Olive oil is considered by some to be healthier and more delicious than other vegetable oils.

However, I was curious what the main differences are between olive oil and vegetable oil.

As a general rule, the main difference is that olive oil is a fruit, and therefore isn’t considered a vegetable oil.

Both olive oil and vegetable oils are manufactured in the same way.

They are either pressed to extract the oil.

Or, they are heated and mixed with various chemicals.

Below I’ll explain why olive oil is not vegetable oil.

Should Olive Oil Be Refrigerated Once Opened? 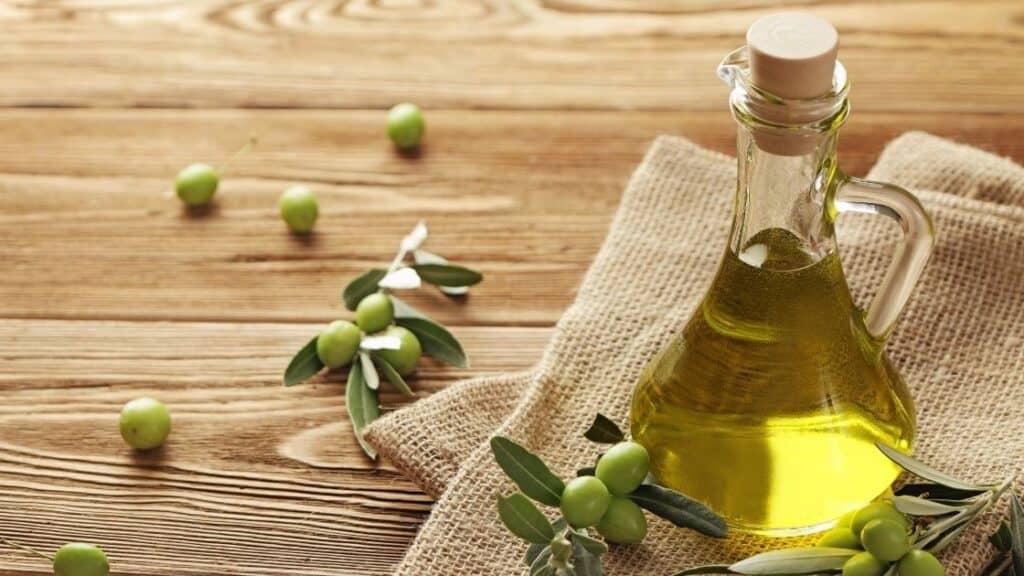 Many olive oil labels state that it should not be refrigerated.

But, people I know often refrigerate it.

So, I was curious what happens if you put olive oil in the fridge and whether you should or not.

I did a tonne of research and here’s how you should store it.

Overall, you should not keep olive oil in the fridge.

It goes partially solid in the fridge and is difficult to remove from the bottle to use.

Olive oil should be kept in a cool dark place.

When olive oil gets hot, condensation will form and can alter the taste.

If you live in a particularly hot climate, that makes it difficult to find anywhere that is cool and dark, but also easy to access so you can add it to salads, use it as cooking oil, or for other dishes.

Then it can make sense to keep it in the fridge.

In that case, you’re likely better off pouring it into smaller bottles and only keeping a small amount of it out of the fridge.

That way you’ll use it up before it’s impacted by the effects of keeping it at room temperature.

And the rest you can keep in the fridge.

The good part about olive oil and vegetable oils is that they are easy to pour.

When you put them in the fridge they can develop white globs that float in the oil.

They can also go semi-soft and don’t pour, or go completely solid depending on how cold your fridge is.

If that does happen, however, it’s not a major issue and you can leave it in the pantry or out of the fridge on the counter and it will turn back into oil.

Olive oil shouldn’t be kept somewhere where it will get hot.

Olive oil is generally sold and stored in green bottles.

These stop UV light from causing chemical reactions in the oil and altering the taste.

It’s common that oil can be left next to the stovetop to make it more convenient to grab.

But, doing so does expose them to heat.

Also leaving them in direct sunlight will heat them up.

When olive oil heats up the water content can evaporate and settle inside the bottle, where it cools and then drips back into the olive oil.

This tends to change the flavor of the olive oil and therefore isn’t recommended.

Why olive oil is not a vegetable oil

Common vegetable oils such as peanut oil, sesame oil, and sunflower seed oil are made from seeds.

Which can differ in botanical classification.

For example, peanuts are classified as a legume.

And is technically a vegetable, and is in the same family as beans like kidney beans, and cannellini beans.

Legumes are generally the seeds of the fruits of plants and therefore, can be considered fruit.

But, they are differentiated from fruits because they aren’t surrounded by flesh.

Olives are fruit that grows on the olive tree. And have a hard stone seed in the center often referred to as a pit.

Olives are different from other fruits in that when squeezed they don’t produce ‘juice’, but rather oil, due to their high oil content.

How Long Does Olive Oil Last? 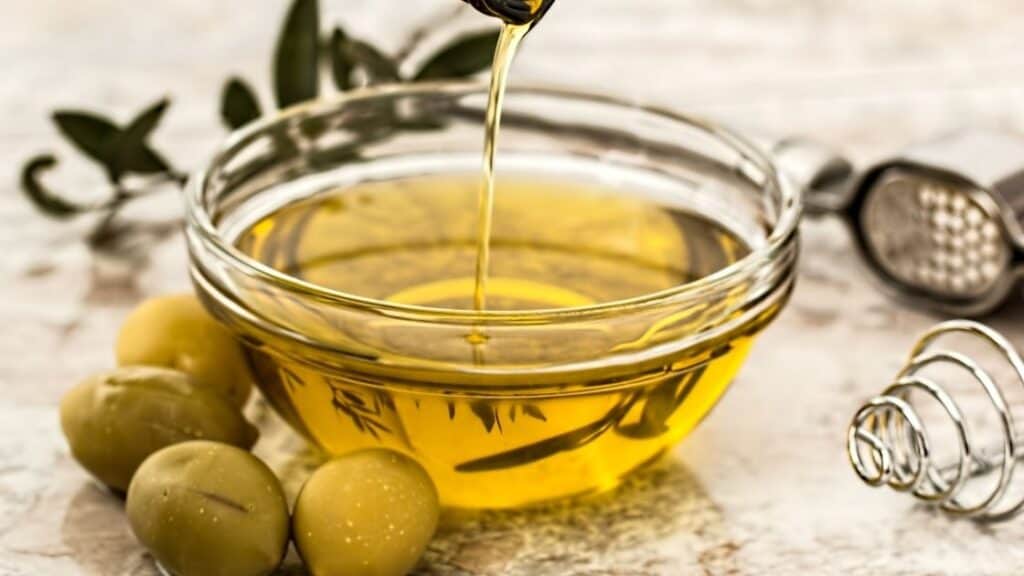 People have reported that putting olive oil in the refrigerator makes it last longer.

Others say that freezing it in cubes and removing them as you need can be a good way to do it.

So, I wanted to know if this is really necessary as most oils tend to last a long time, as well as, how long does olive oil last.

Processed olive oil is more stable and keeps for longer at the higher end of the range.

Whereas, extra virgin olive oil doesn’t undergo any processing and does not last as long.

Processed oils are made by heating, and using chemicals.

This provides greater yield, and therefore it is favored by olive oil manufacturers.

However, it doesn’t have as good a flavor.

Extra virgin olive oil is made only from pressing olives to extract the oil and isn’t combined with processed olive oil like standard olive oil.

So, extra virgin olive oil lasts for around 9 to 12 months if kept in a cool dark place.

Whereas, regular olive oil lasts a lot longer and can last for up to 24 months.

The ketogenic diet is known to be good for weight loss. And you may be wondering whether eating olives and olive oil is OK on a low carb or ketogenic diet. Juices and oils of fruits are generally significantly lower in fiber than the fruit itself.

But, it can also be lower in carbs. So, I explored this topic further and explained it in detail in this article about whether you can eat olives on a keto . 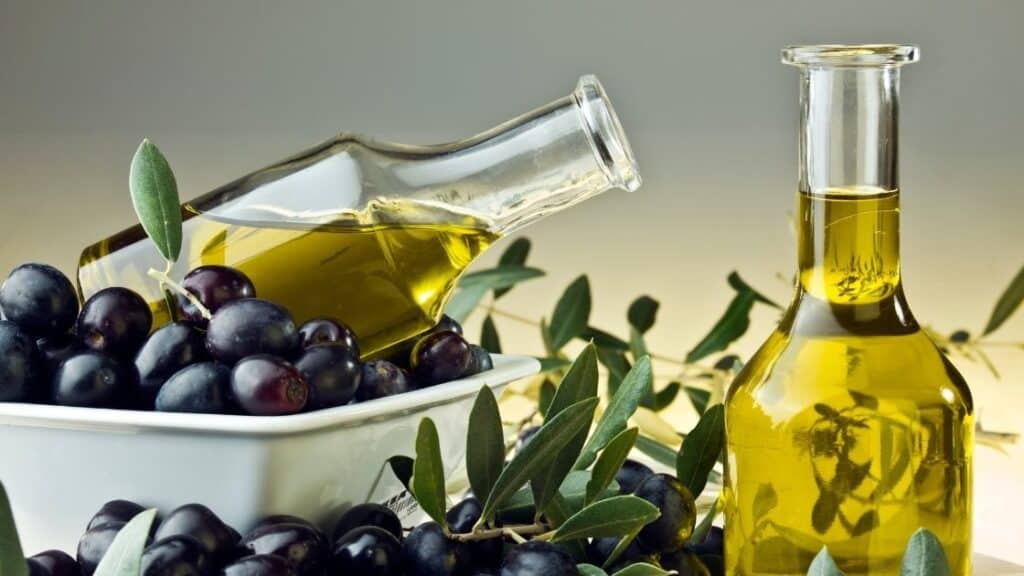 Keeping olive oil in the fridge can happen by accident, or a particularly cold day can turn it partially solid, or completely solid.

But, does cold damage olive oil?

According to CentraFoods, a bulk food company, cooling olive oil to the point where it becomes solid or partially solid does not affect the flavor of olive oil.

Also warming solid olive oil back into liquid form does not affect the taste.

Therefore, buying olive oil in bulk, and storing it in the fridge or freezer is perfectly fine.

It’s also fine to keep it in the fridge.

However, it makes it difficult to use if kept in a bottle, because it can become so solid that you can’t pour it.

Fridges can be cooler or warmer depending on what temperature it’s set to, so you may find keeping olive oil in the fridge only causes some of it to be solid.

And you can still pour out enough of it for cooking, or to be used in other dishes.

Some people have reported that keeping olive oil in the fridge increases the shelf life of olive oil.

And cooler temperatures do slow down chemical reactions.

But, olive oil is generally sold in 1 liter (¼ gallon, 1 qt) bottles or smaller.

And because it lasts for around a year when not stored in the fridge, you can generally use it all up before it goes bad.

How Long Does Vegetable Oil Last? 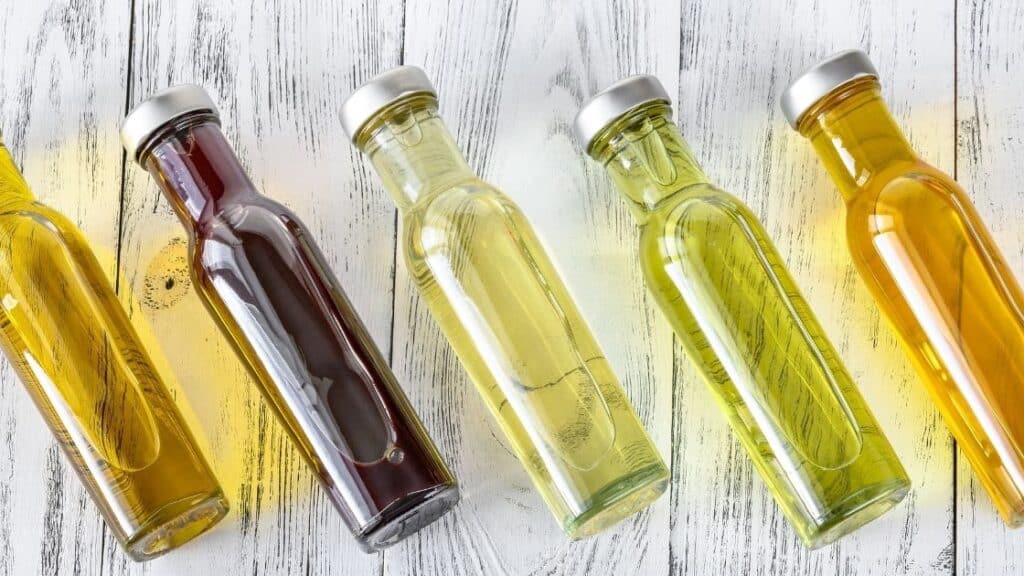 Vegetable oil is another great cooking oil, and can also be used to make vinaigrettes and used as a salad dressing. But, how long does it last?

As a general rule, vegetable oil lasts 4 months in the pantry once opened according to the USDA.

If unopened it can last 2 years if kept in a cool dry place.

The reason is that many of the nutrients in standard vegetable oil are removed during the heating, and manufacturing process.

Because there’s fewer organic compounds in them, they don’t react as readily with the air.

Or, when the oil is kept at room temperature.

How to tell if vegetable or olive oil has gone bad? 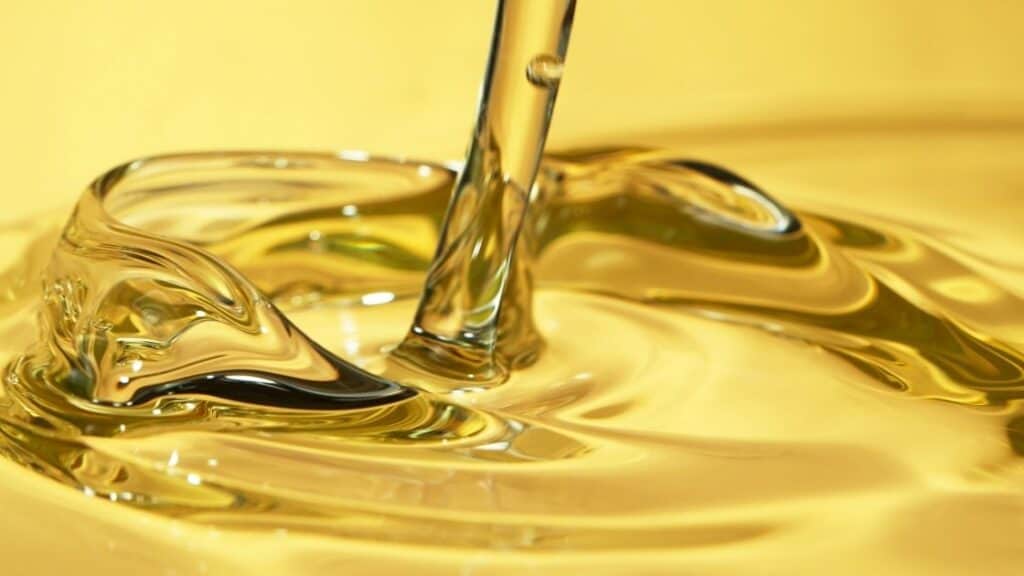 Vegetable oil or olive oil that has gone bad has a distinctive smell that isn’t present in fresh oil. It can have a sour smell, but can also have a metallic, or crayon-like odor to it.

The best way to test it is to sniff the bottle, or pour a small amount out into a spoon and then sniff it.

Interestingly, many people like the taste of slightly off olive oil.

According to medical professionals, rancid olive oil does not have any negative health effects.

However, the flavor can be a bit of an acquired taste. And if you serve it to guests they may think it tastes unpleasant.

Oil tends to make its way throughout a dish when used as a dressing, or as cooking oil so it can change the flavor of the entire salad or dish when used.