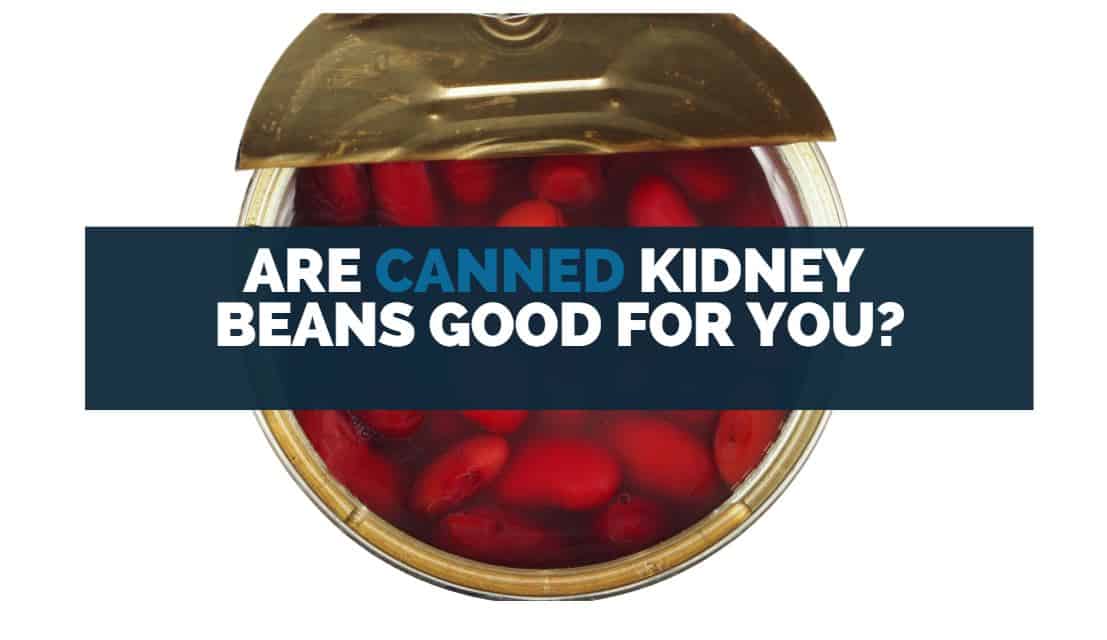 I can just open the can drain the liquid and they’re ready to eat.

But, I wondered if they aren’t as healthy for you as dried kidney beans.

So, I did a little research and here’s what I found.

So, are canned kidney beans good for you?

Kidney beans as part of a balanced diet are good for you.

Beans are in the legume family, and eating legumes has been shown to lower the risk of getting type 2 diabetes. But, one study found that canned food increased BPA, so you shouldn’t eat only canned foods.

You should ensure variety within your diet.

Some beans are healthier than others, and some canned foods are even more nutritious than kidney beans.

So, read on to discover more about including canned kidney beans in your diet, how healthy they are, and what the healthiest canned foods are.

Go to top
Table Of Contents show
1 How Often Should You Eat Canned Kidney Beans For Optimum Health?
2 Is the liquid in canned beans bad for you?
3 What are the most nutritious canned foods?
4 Can You Survive On Canned Food?
5 In Conclusion

How Often Should You Eat Canned Kidney Beans For Optimum Health? 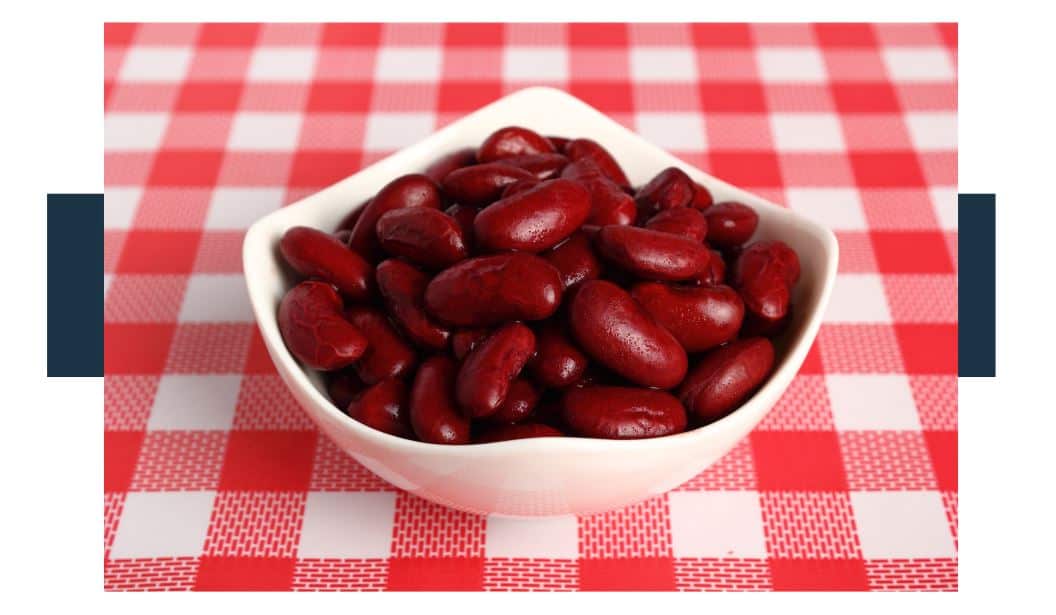 According to New York based nutritionist Karen Ansel, R.D., eating canned foods once a day is fine.

But, you shouldn’t eat canned food for every meal.

The reason is that the chemicals found in the can contain BPA.

BPA causes imbalances in the natural hormones in your body which have knock on effects that include increased risk of cancer, and heart disease.

So, if you eat canned food all day everyday over a long period of time, it can build up in your system and lead to health issues.

Eating just one serving of canned food a day.

For example, a can of tuna with lunch is safe, because your body can remove the toxins.

Any more than that and you will create a build up in your body that can lead to health issues over time.

Webmd.com has shown that if you eat about half a cup of kidney beans a day, it is very beneficial for your health.

The main reason is that you are giving your body natural food, rather than processed food.

Your mother was right, eating a balanced diet of fruits and vegetables not only makes you feel great, but also makes you live longer.

The National Health Service in the UK, has reported that kidney beans need to be boiled.

They say that if you eat them raw they can cause discomfort in your stomach, and vomiting.

Which is because they contain a toxin called lectin.

When you boil them the lectin chemical breaks down.

Canned kidney beans are boiled, cooled, and then canned.

So, you don’t need to be worried about cooking them.

On a side note, for the longest time I thought that canned tuna was raw.

But, one day I looked it up and canned tuna is actually steamed and then canned.

Is the liquid in canned beans bad for you?

The liquid in canned beans is water and salt – on the label they usually call it brine – which is it’s technical name.

As the beans sit in the water the starch in the beans leaks out into the water, which makes it slimy and a grey, red or black in color, depending on the kind of beans.

The World Health Organization says that most people consume too much salt in their diet.

But, in my opinion most people eat a poor diet including fast food, and processed food which contains a lot of salt.

If you’re health conscious and generally eat mostly fruits, vegetables, and meat then the amount of salt you consume should be in a healthy range.

So, leaving the brine on them will be fine.

If you know your diet needs some work, or you’ve eaten a bunch of crappy food lately, you’ll want to rinse off the brine

The easiest way is to pour the beans straight from a can into a colander over the sink, and rinse them under the tap.

The beans will taste lighter if you rinse off the water. And they are more filling if you include the brine – say in a soup, or if you pour them over a salad or rice.

Some people have said that the brine can make your stomach feel uncomfortable, and can cause flatulence.

What are the most nutritious canned foods?

Healthline.com has reported that the 11 most nutrient dense foods are:

Of these the only ones that you could find in a can are salmon, sardines, seaweed and blueberries.

But, in my experience canned blueberries are hard to find unless they’re mixed with other fruit.

And canned seaweed is quite rare.

I’ve found canned seaweed is quite common in Japanese food stores, or at Asian supermarkets.

You can find pickled garlic in glass jars not cans. Which will also last a long time, and is very convenient.

These are easiest to find in Asian supermarkets, in my experience.

But, some large grocery stores will carry them.

Kidney beans are in the list of the top 100 most nutrient dense foods, says George Mateljan the founder of the World’s Healthiest Foods.

But, the BBC puts beans towards the bottom of the list of the most nutritious foods, at about number 70.

I recently researched which kinds of beans are healthier than others.

I compared pinto beans and black beans, as well as, cannellini beans and butter beans.

You can read both articles Which is healthier pinto or black beans? and here Cannellini beans vs butter beans

Can You Survive On Canned Food? 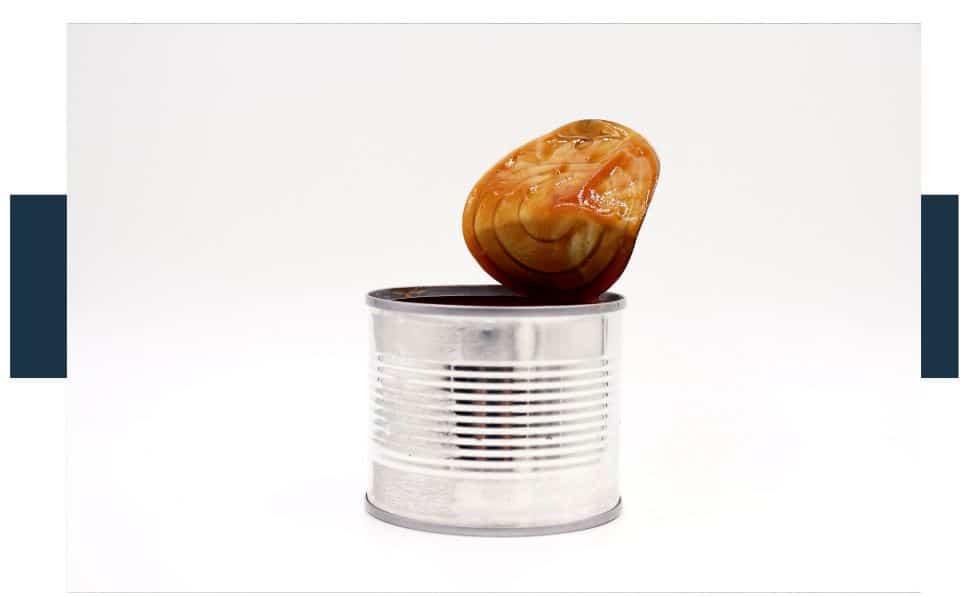 You can live on canned food for almost forever.

But, after a few years, you may notice some adverse health effects.

This is because the materials used to make the can have been shown to contain BPA.

In small amounts BPA is fine, but if you eat canned food at every meal, you will develop health problems.

Top nutritionists recommend to eat only one meal a day that contains food from a can.

The ideal and healthiest food to eat is as fresh as possible. However, not everyone has the space for a vegetable garden, or lives close by a fresh food market.

So, canned food is a good alternative.

If you want to reduce the amount of canned food you eat, a good alternative is to eat preserved food from glass containers, and frozen food.

That way you won’t be taking in so much BPA.

But, technically you could survive on canned food, and the human body is incredibly resilient.

You just want to ensure you’re eating enough calories. Health.gov recommends that adult females need to eat about 1,600 to 2,400 calories and men – about 2,000 to 3,000 calories per day to remain a healthy weight.

Which means that one can of kidney beans is about 1000 calories – about one third of the calories a male or female needs in a day.

Canned kidney beans are good for you as long as you only eat only one type of food from a can a day.

This is due the fact that the cans that canned food comes may contain BPA, which is shown to increase the risk of cancer, and heart diseases.

The BPA can interfere with your hormone levels which impacts the natural processes in your body.

So whilst canned food is good – like anything – moderation is key.