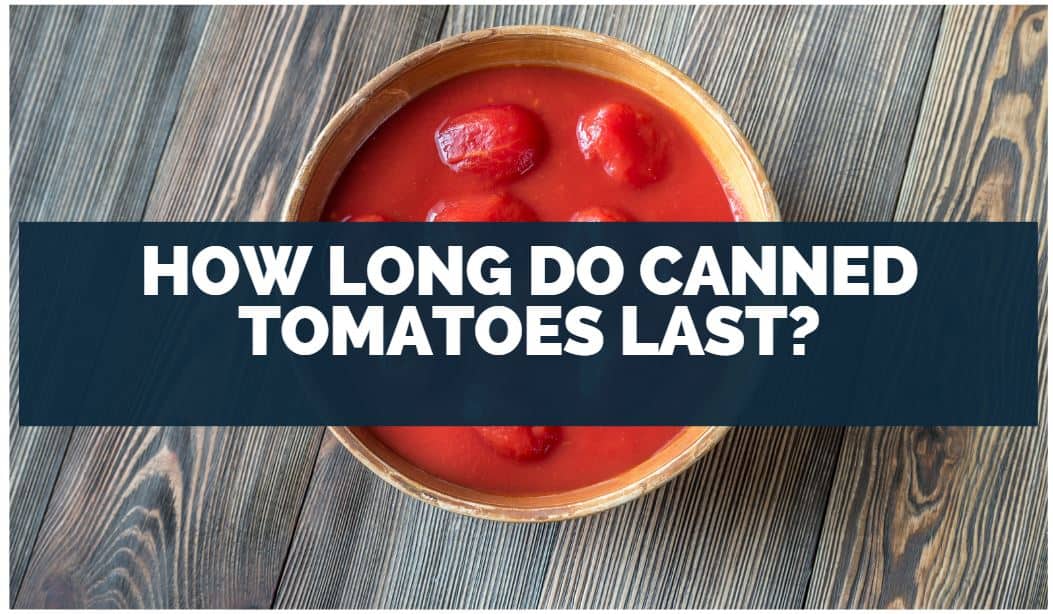 There are few different ways to preserve tomatoes.

But, today I will explain how long canned tomatoes last.

Canned foods that are left undamaged and unopened have been known to last for as long as 100 years, and it’s widely believed they will last forever.

But, before 18 months canned tomatoes taste the best.

Once opened, canned tomatoes will tend to go bad as fast as other foods.

But, if submerged in water they can last longer than fresh tomatoes.

How Do You Tell if Canned Tomatoes Are Spoiled? 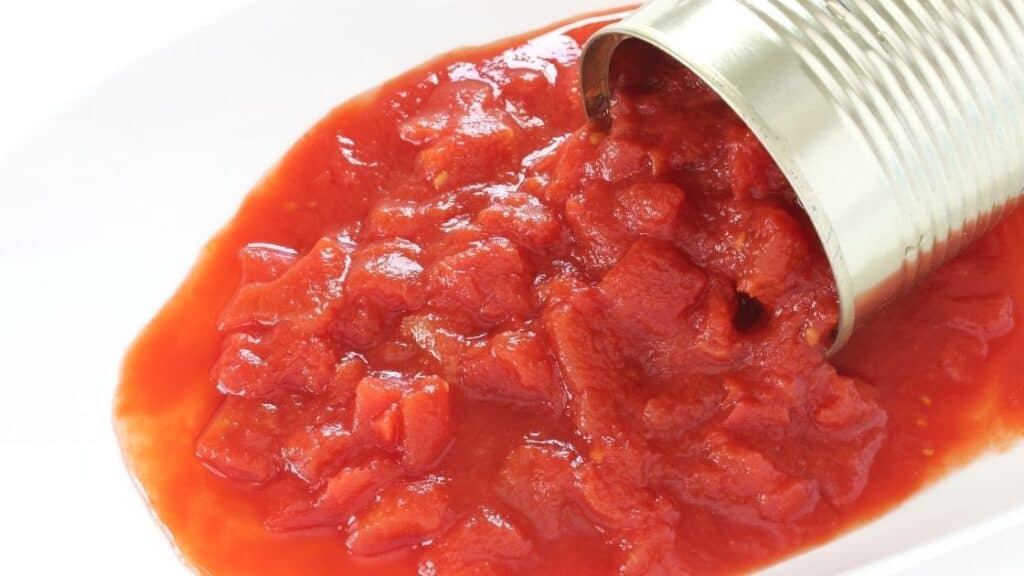 The reason is that the air carries microorganisms that will settle on to the tomatoes and begin to grow, spoiling them.

There are a range of ways to tell if canned tomatoes are spoiled, and here’s what they are.

Smelling, or tasting a very small part of the canned tomatoes will tell you if they are spoiled.

They will have an unpleasant taste and smell which will repulse you.

Spoiled canned tomatoes also can have visible mold growing on them.

If the canned tomatoes are unopened and the can is undamaged, it’s virtually guaranteed that they will be fresh forever.

Unless there was some error made when they were being canned.

The reason canning works so well to preserve food is that no air can make contact with the food.

And the food is superheated to kill anything that’s already in the food.

If you smell the tomatoes and they have a sour rancid smell that gives your negative reaction then the tomatoes are spoiled and you shouldn’t consume them.

This occurs once a tin of tomatoes is opened and left in the fridge.

Ideally, any opened unused canned tomatoes should be kept in the fridge because this will make them last the longest.

The cooler temperatures in the fridge will slow the growth of bacteria and fungus which will spoil them within one week to a month.

Therefore, you should aim to only open enough canned tomatoes that you plan to eat very soon.

As once a can of tomatoes is opened the flavor will decline with each day they are kept in the fridge.

Here’s a video that shows how canned tomatoes are made:

As you can see from the video the tomatoes are peeled, then sliced, and put into cans.

The cans are then heated to sterilize any organisms in the cans.

This kills them so they don’t grow.

And because of the seal, no new bacteria or fungus can enter the tomatoes.

Once this seal is broken new organisms in the air can settle onto the tomatoes.

As they grow they break down the chemicals in the tomatoes causing them to go bad.

They also can release by-products that give the tomatoes a sour rancid smell.

Interestingly, tomatoes are one of only a few foods that are high in lectin.

Lectin in high amounts is toxic.

However, the amount of lectins found in tomatoes is very low, and you can eat as many tomatoes as you like without worrying about consuming too much lectin.

There are also diets that limit the consumption of lectins.

So, I did an analysis of the ways to reduce the lectins in tomatoes. C

Are canned tomatoes as healthy as fresh tomatoes?

Overall on balance raw tomatoes have about 20% more vitamins and minerals total.

Here’s a table that shows this data:

Each individual vitamin or mineral has its own recommended daily intake (RDI).

But, I’ve summed them together to give a broad overview of which is healthier.

As you can see for the total of all nutrients – vitamins, and minerals – raw tomatoes contain 20% more.

However, each individual nutrient can vary in its relative percentage of the recommended daily intake. 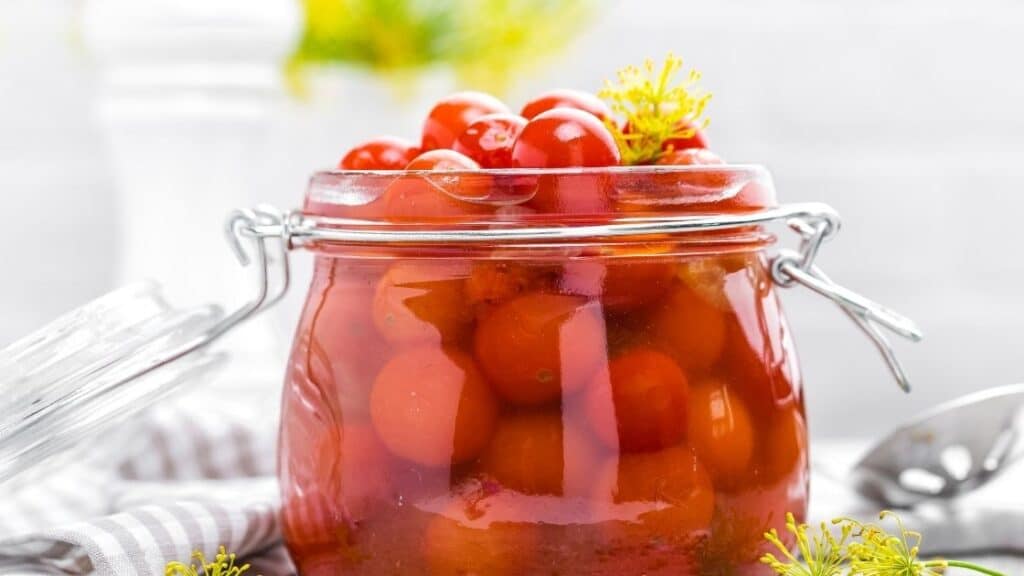 Generally, bad canned tomatoes will have a taste and smell that is repulsive.

But, if they are almost spoiled but not quite or if you accidentally mix them into a recipe can they make you sick?

These include vomiting, diarrhea, headaches, nausea, and stomach pain.

Although it isn’t a serious health issue it’s very unpleasant.

Canned tomatoes will almost always be freshly provided the can is unopened.

If you have some leftover canned tomatoes that you’ve kept for a few days or more then sniff them, and taste a small amount to see if they taste and smell normal.

When they have an unpleasant taste or a sour smell then discard them.

What Happens if You Eat Bad Canned Tomatoes? 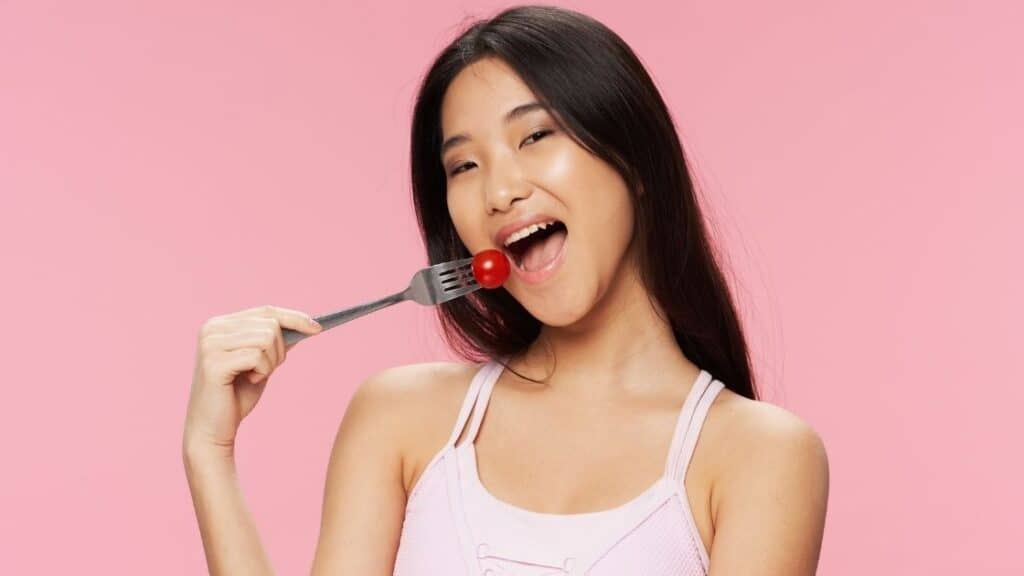 Once canned tomatoes are opened they can spoil within a week but can last as long as one month in the fridge.

If you do consume bad canned tomatoes here’s what happens.

An upset stomach, diarrhea, vomiting, nausea, and a headache can occur if you eat bad canned tomatoes.

The severity of the symptoms depends on how much of them you consume, and the specific bacteria, fungus, or mold that has grown on them causing them to spoil.

The negative effects of eating spoiled tomatoes are not potentially life-threatening provided you don’t already have a serious pre-existing medical health condition (source).

According to medical professionals, it will pass in a few days to a week once the toxins have left your body.

Can you eat expired canned tomatoes or tomato sauce

Food goes back to when bacteria, fungus, or tiny organisms eat it.

As they extract the nutrients from the food they also produce waste products that can be toxic.

Canned foods such as tomatoes and tomato sauce are heated to high temperatures to kill any bacteria, fungus, or tiny organisms in the food.

Also, due to the fact that they are completely sealed no new bacteria, fungus, or organisms can get into the food.

Therefore, provided a can is left sealed, hasn’t gone rusty, or been punctured somehow during transportation the food will keep virtually forever.

And you can eat canned tomatoes or tomato sauce that has expired.

However, once it has expired it’s a good idea to do a smell and taste test to verify that it isn’t spoiled.

If the can has been opened and is expired it will go bad at about the same rate as an unexpired can.

And will last in the fridge for a few days to a month before going bad.

Opened canned tomatoes or tomato sauce should not be kept at room temperature as it will spoil faster than if kept in the fridge.