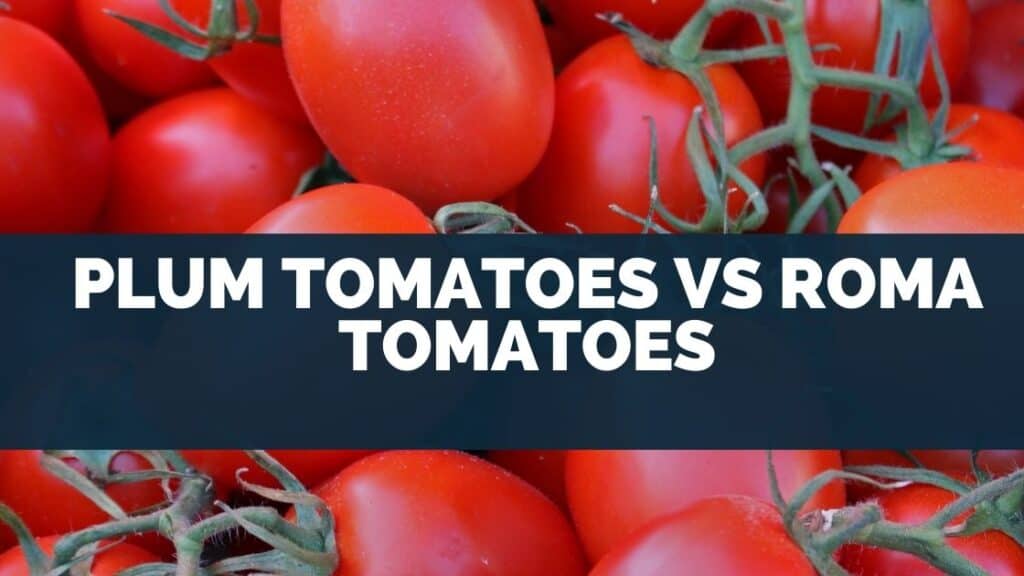 There are many different varieties of tomatoes.

The typical round tomato, small cherry tomatoes, and the in-between plum and grape tomatoes.

Today, I will explain the difference between plum tomatoes and Roma tomatoes.

Roma tomatoes are a variety of plum tomatoes.

Plum tomatoes are not a scientific name but are a colloquial term used to refer to varieties of tomatoes that have drier flesh similar to that of a plum.

They are long and oval in shape dissimilar from a plum.

Plum tomatoes which include Roma and San Marzano have fewer seeds and juice in the center.

Due to their texture and the lack of seeds and juice, they are better for preparing sauces.

In this article, I will explain the differences between San Marzano and Roma plum tomatoes, and whether San Marzano tomatoes taste better than other tomatoes. 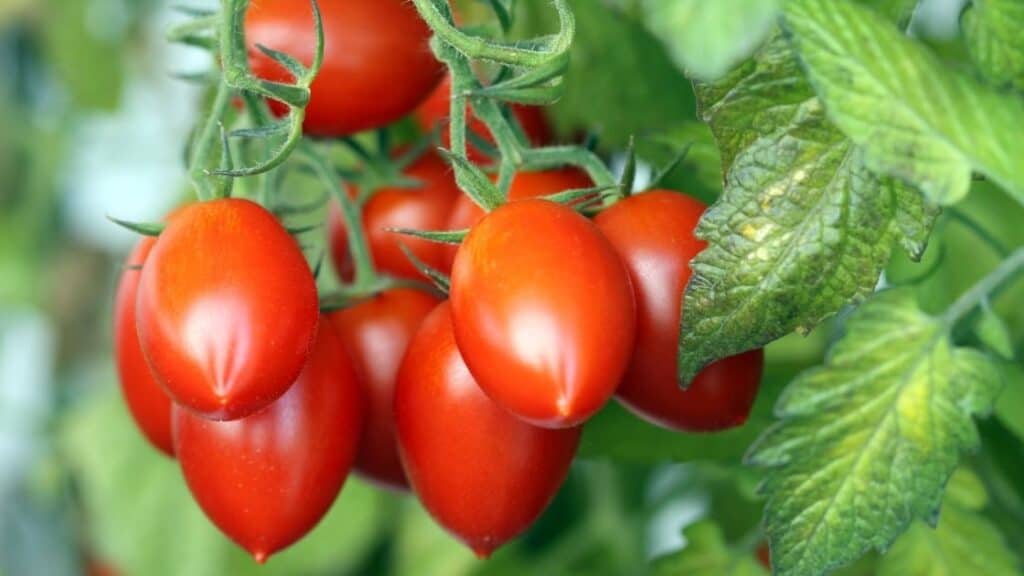 The two common types of plum tomatoes are San Marzano and Roma.

They are two distinct varieties that have some differences but generally have the same outside appearance.

Here’s what they are:

San Marzano are sweeter and have thicker flesh than Roma tomatoes.

Roma is considered by most people to be easier to grow.

Whereas, San Marzano is susceptible to an issue known as blossom end rot.

Blossom end rot is where the bottom of the tomato turns brown and is inedible.

It needs to be removed which means about ¼ of the tomato is thrown away.

They also have various differences in the nutrients they contain.

Here’s a table that shows a side by side comparison of the nutrients found in both based on the recommended daily intake (RDI) of each:

When you sum all the nutrients they are both almost identical however, there are some notable differences in the individual nutrients. They are:

San Marzano tomatoes are often canned so that they can be used all year long.

Here’s a quote from chef:

“23 years as a professional chef taught me that at least as far as canned tomatoes go, San Marzano is the gold standard. Sweet, low-acid (so they don’t end up tasting like metal from the can) and with a much higher ratio of flesh to liquid”

Based on the opinion of this chef it’s clear that if you’re using canned tomatoes and are choosing between San Marzano and Roma tomatoes, San Marzano tomatoes are a better option.

There are many different varieties of tomatoes.

Some are better suited to be used sliced in sandwiches and can provide a better flavor and texture for different recipes.

They do place in the top 10, but the main advantage of San Marzano tomatoes is their texture which makes them ideal for sauces.

Plum tomatoes are different from other tomatoes because they contain less juice and seeds.

There is some debate about the prestigious status held by San Marzano tomatoes.

It’s conclusive that the texture of them is the best for making sauces such as tomato sauce for chips, or pizza.

Here’s a video that shows a traditional way of making tomato sauce in Italy:

For example, many San Marzano tomatoes are imported from Italy.

Whereas, if you get a variety of San Marzano that is grown locally it may not have the same delicious flavor.

As you may know, various plants in the same variety are selectively kept because they have a particularly delicious flavor.

And also the type of soil that is unique to Italy will have an influence on the overall flavor.

Therefore, how good or average certain San Marzano tomatoes taste that you buy either locally or canned varies a lot.

As well as, the flavor of other varieties.

Cherry tomatoes are also a lot sweeter than regular tomatoes.

And are sweeter than plum tomatoes.

Why Are San Marzano Tomatoes the Best? 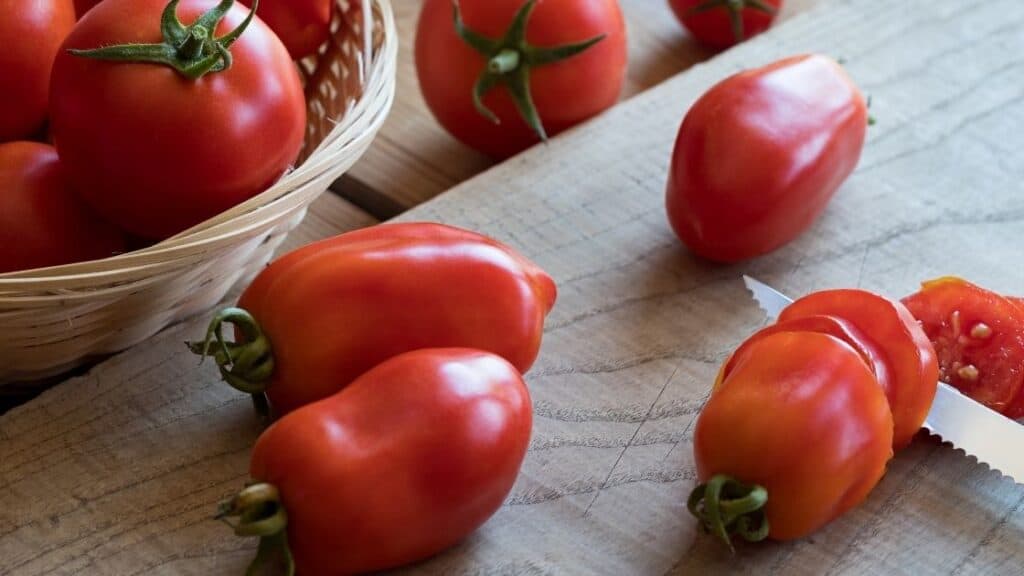 San Marzano tomatoes have a reputation for being very good.

Tomatoes in general are some of the most popular vegetables. But, here’s what makes San Marzano tomatoes the best.

Overall, San Marzano tomatoes are the best because they have a sweeter, more pleasant flavor than other plum tomatoes.

Plum tomatoes are preferred for sauces because they have thicker walls, with fewer seeds and fluids.

But, certain tomatoes are better for different purposes.

For making tomato sauce for pizza, or as a dipping sauce, San Marzano tomatoes are preferred because of their flavor according to most people.

When you cut into a San Marzano or other plum tomato the inside is equally divided into 3 compartments/segments.

They have thick walls, and one of the segments is typically almost all flesh, whereas the other segments have a small number of seeds and barely any juice at all.

The seeds and juice don’t make for a very good raw ingredient in a tomato sauce because a tomato sauce needs to be thick with the flesh of the tomato.

Rather than runny and watery due to the seeds and juice.

So, San Marzano tomatoes are far better for making sauce.

Tomato sauce is very versatile and can be used on pasta such as spaghetti, as well as, for pizza or used as a dipping sauce for roasted root vegetables like potatoes, and sweet potatoes.

San Marzano tomatoes are a type of plum tomato.

San Marzano tomatoes overall have a sweeter less acidic flavor than the other main type of plum tomatoes – Roma tomatoes.