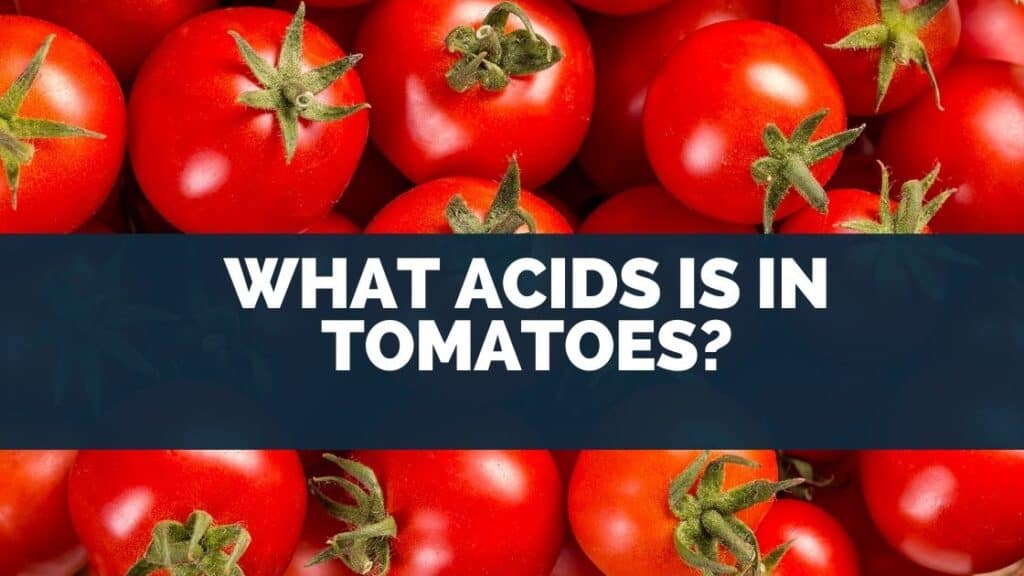 Tomatoes have a slightly sour taste which comes from the small amount of acid in the juice and flesh, mostly the goo around the seeds.

There are various different acids in fruits and vegetables.

In this article I will explain what acids are in tomatoes.

Citric acid and malic acid are the two main acids in tomatoes.

One medium sized tomato contains 375 mg of citric acid, which is about 5% to 10% of a teaspoon.

One medium sized tomato also contains 45 mg of malic acid, which is about 0.5% or 1% of a teaspoon, both tiny amounts.

Citric acid is the main acid in citrus fruits like lemons, and oranges.

Generally, fruits and vegetables are fine, and you can eat as many of them as you like within reason.

But, today I will take a deeper look at whether the acids in tomatoes are bad for you, how much of these kinds of acids will have negative effects.

Some health issues require you to consume a low-oxalate diet.

So, I will also cover whether tomatoes and tomato juice contain oxalates.

Is Acid in Tomatoes Bad for You? 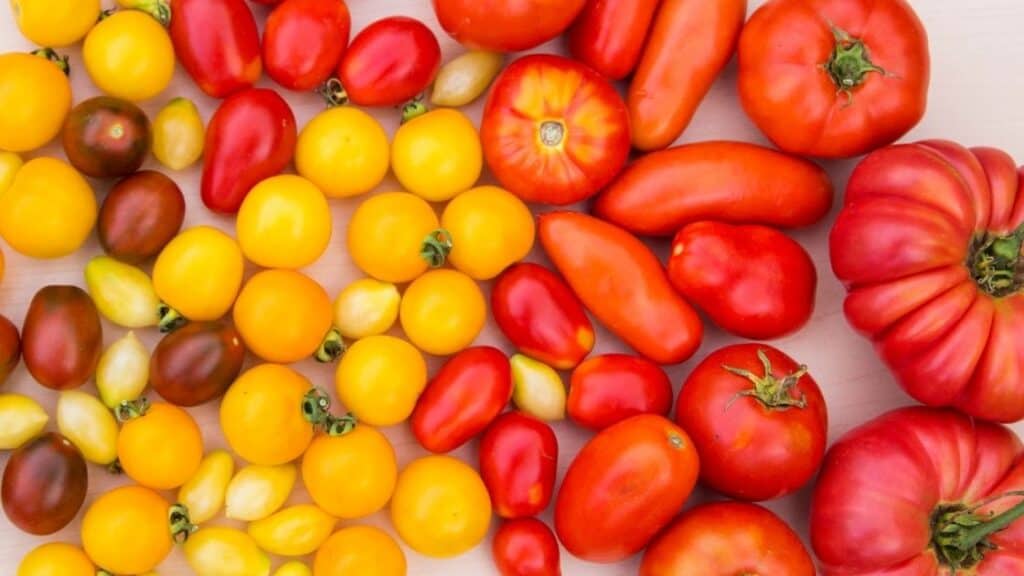 Tomatoes have only a small amount of natural acid in them.

But, certain foods contain toxins which in small or large amounts can be bad for you.

So, here’s whether the acid in tomatoes is bad for you.

The acid in tomatoes is not bad for you.

In extremely high amounts the most prevalent acids citric and malic can be bad for you.

But, the amounts found in tomatoes are extremely small and about 0.1% per tomato of an average dose when it’s used as a medicine according to medical professionals.

When citric acid is used as medicine the recommended dose is 0.1g per kg of body weight, according to Dr Patel who has a phD in nutrition.

For example, a person that weighs 154 pounds (70kg) would have 7g of citric acid.

Therefore, you can eat as many tomatoes as you like and never get close to the recommended daily dose of citric acid when it’s used as a supplement.

Next, take a look at malic acid.

One form of malic acid was called Super Malic and was used to treat fibromyalgia.

This is quite a high percentage.

And it is possible to go over the amount that malic acid tablets are used as a treatment.

But, so far there are no known side effects to consuming a high amount of malic acid.

To be on the safe side don’t eat more than 6 medium-sized tomatoes per day.

Unless you drink tomato juice every day, it’s very unlikely you’ll consume that many tomatoes.

Here’s a table that shows a breakdown of the different acids in tomatoes and how they compare to doses used in supplements or as a recommended treatment.

The amount of malic acid to reach the amount in malic acid supplement pills is the equivalent of 2 cups of tomato juice per day.

But, the interesting thing about tomatoes is that they are high in vitamin C.

The effects of consuming too much vitamin C are diarrhea.

As you may know, diarrhea is very inconvenient. And you can’t really do anything other than be close to a bathroom, because when you have the urge to go poop, you often only have about 30 seconds before you can’t hold it in.

3 medium tomatoes make one cup of tomato juice. 1 medium tomato contains about 20% of your recommended daily intake of vitamin C.

This means if you drink 1 cup and a half of tomato juice you’ll be at the recommended daily intake of vitamin C.

Not to mention, other foods you may consume that contain vitamin C such as oranges, or orange juice.

I compiled a full list of the nutrients in regular tomatoes, plum tomatoes, and cherry tomatoes as a percent of the RDI.

It shows what kind of tomatoes are the healthiest, and you can see which are higher in some nutrients over others.

To see this info read this article about whether tomatoes contain starch.

Are Cooked Tomatoes High in Oxalates? 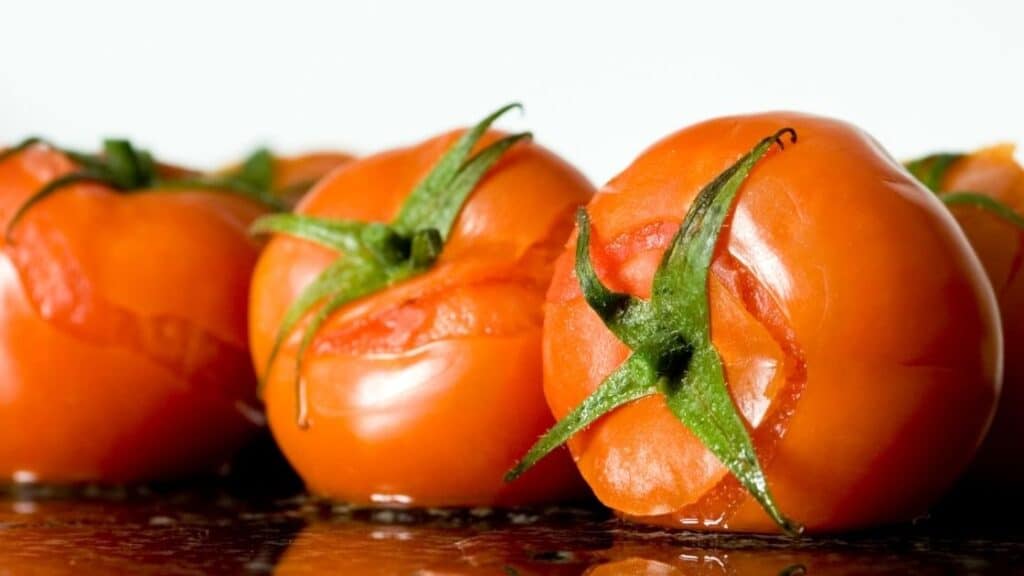 Consuming a low oxalate diet is recommended by many medical professionals if you are prone to kidney stones, or have kidney issues.

Therefore, narrowing down a list of foods to avoid is important.

Here’s whether cooked tomatoes are high in oxalates.

Cooked tomatoes are not high in oxalates according to research done by the University of Chicago.

Therefore, it’s perfectly fine to eat tomatoes if it’s been recommended to you to consume a low oxalate diet.

According to the data compiled by the University of Chicago, based on various studies the foods highest in oxalate are:

A full list as a spreadsheet of the oxalate content of foods can be downloaded from the Harvard School of Public Health here.

Using that spreadsheet you can sort them from highest to lowest.

Also, here’s a good video from Dr. Melina Roberts about what oxalates are, and why plants have them:

Is Tomato Sauce High in Oxalates? 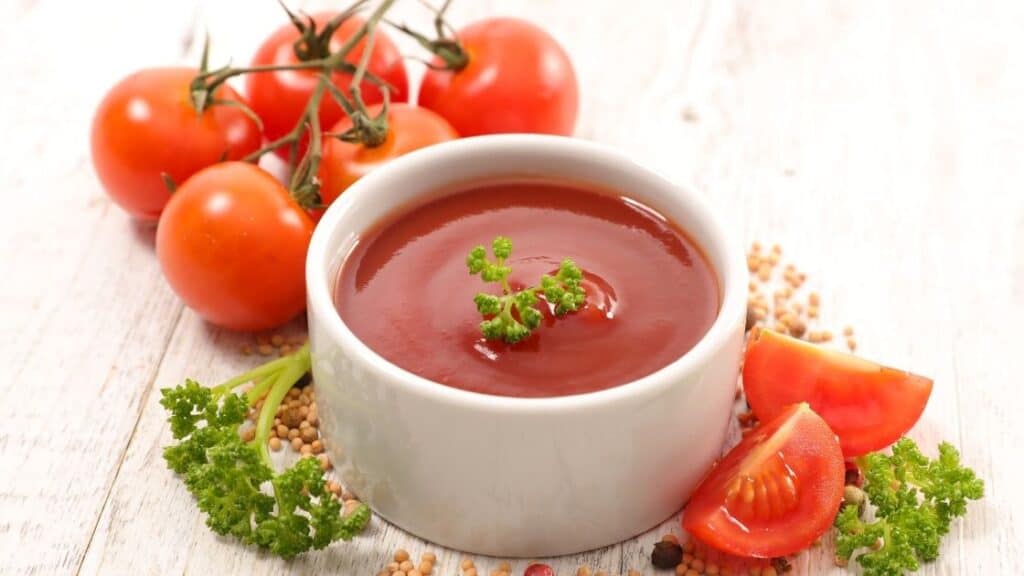 Tomato sauce is used on many very popular foods such as pizza, and pasta.

It’s made by concentrating tomato-cooked tomatoes and mixing it with other ingredients.

Although it adds a lot to these popular foods, is it high in oxalates, and should you consume none or much less of it if you have kidney issues?

Tomato sauce is high in oxalates according to Harvard School of Public Health.

Tomatoes are not high in oxalates.

But, tomato sauce is a concentrated form of tomatoes.

This increases the oxalate content and makes tomato sauce unsuitable on a low-oxalate diet.

Tomato sauce is also typically made with onions, carrots, and celery.

These vegetables are cooked first in a frying pan, then either canned tomatoes or pureed tomatoes are mixed into it.

Then it’s blended to give it a smooth and even texture.

Onions, carrots, and celery are not high in oxalates.

Therefore, the main reason that tomato sauce is high in oxalates is that the tomatoes are concentrated during the cooking process.