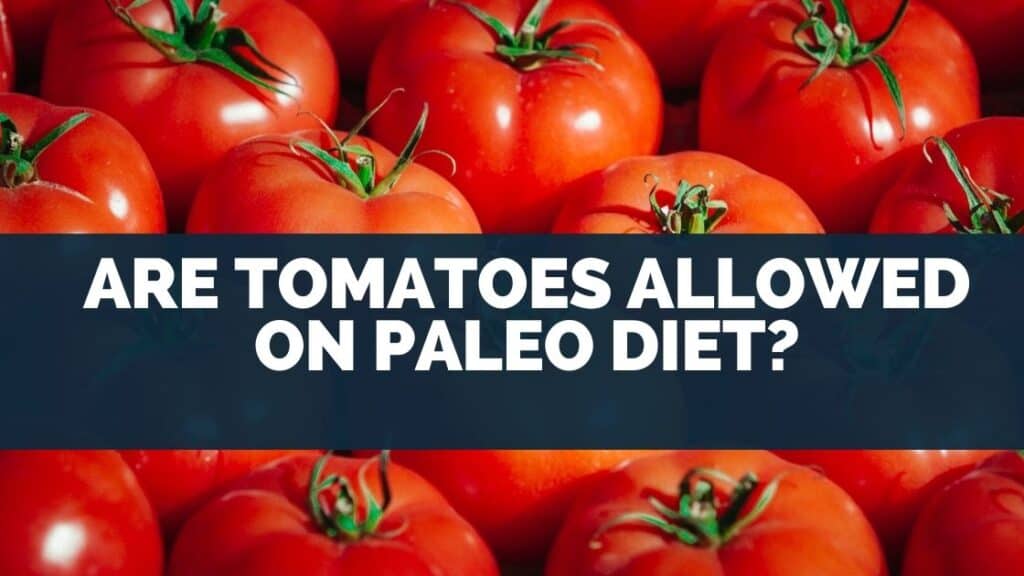 When I first heard about the paleo diet I thought I’d give it a try, and I really liked it.

After reading a bunch of books about it, I narrowed down what foods to eat, and which foods you should avoid.

In this article I will explain if tomatoes are allowed on the paleo diet.

The main emphasis of the paleo diet is cutting out foods such as bread, and rice, and consuming mostly fruits, vegetables, meat, and animal fat.

A good rule of thumb on the paleo diet is to consume about 7 oz (200g) of meat, and as many vegetables, as you like for each meal, and to eat 3 to 4 meals per day.

You can also eat snacks in between.

Today, I will go into more details about the carbs in tomatoes, how they affect your blood sugar, and whether there is anything to watch out for when eating tomatoes.

Go to top
Table Of Contents hide
1 Are Tomatoes High in Carbs and Sugar?
1.1 Examples of some basic paleo diet meals involving tomatoes
2 Do Tomatoes Raise Blood Sugar?
3 Why You Shouldn’t Eat Tomatoes?

Are Tomatoes High in Carbs and Sugar? 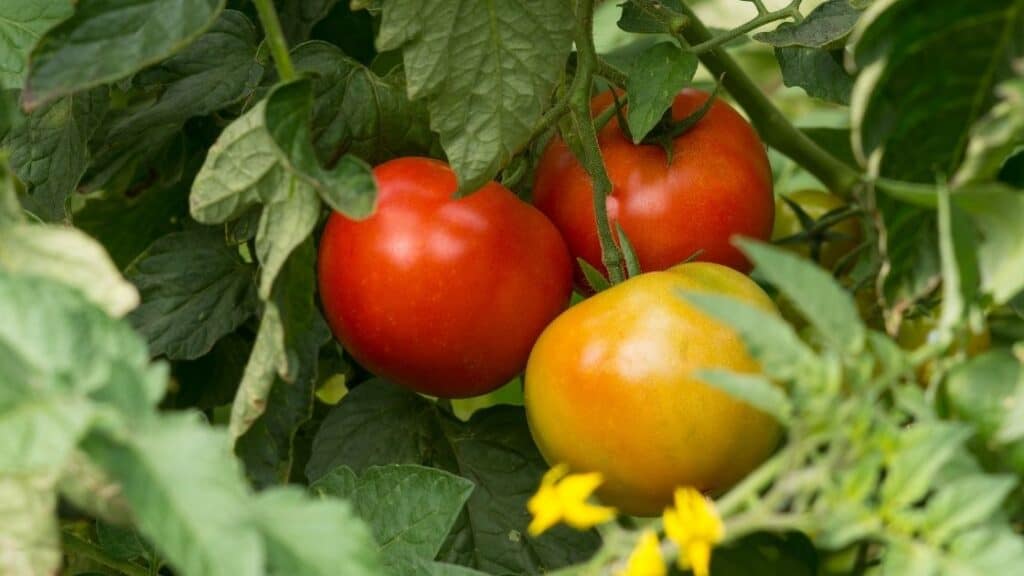 Carbs are generally high in calories, this means they should be limited if you’re trying to lose weight.

Sugar is also high in calories so I thought I’d cover how much sugar and how many carbs are in the different kinds of tomatoes.

Here’s a table that makes it easy to compare the different types of tomatoes based on their sugar and carb content.

From the table, you can see that plum tomatoes have the lowest amount of carbs and sugar.

But, regular tomatoes are a close second.

Cherry tomatoes have the highest amount of carbs and sugar.

You may have noticed that cherry tomatoes are quite sweet, and quite a bit sweeter than other types of tomatoes.

As you may know, plum tomatoes are oval-shaped tomatoes which are sometimes called Italian tomatoes.

This is because they are favored in Italian cooking.

The two common types are Roma and San Marzano.

The reason they are popular in Italian cooking is that they have a high flesh to seeds and goo ratio.

In Italian cooking, tomatoes are made in bulk into strained tomatoes, also called tomato puree.

This makes them very easy to use in cooking where they can be added to pasta sauce and pizza.

The increased amount of flesh relative to the number of seeds and good means they produce more sauce, as the goo surrounding the seeds doesn’t add much to the flavor, and the seeds are removed when straining them.

A well-known figure in the Paleo space is Mark Sisson.

He has commented on tomatoes a few times.

He has said that tomatoes are perfectly fine to eat on the paleo diet as they are low in carbs and low in sugar.

So, here are some basic recipes so you can see how tomatoes would work on the paleo diet:

There are some concerns with the vitamin C content in tomatoes.

Tomatoes contain quite a high amount of vitamin C.

Vitamin C in high quantities can have a laxative effect. More on this towards the end of the article.

Here’s a video from JJ Flizanes where she explains a paleo tomato sauce recipe:

Although it’s a ‘paleo’ recipe, based on the tenets of a paleo diet, a normal tomato sauce recipe is paleo provided you don’t add too much sugar to it. As the paleo diet generally recommends a low amount of sugar. 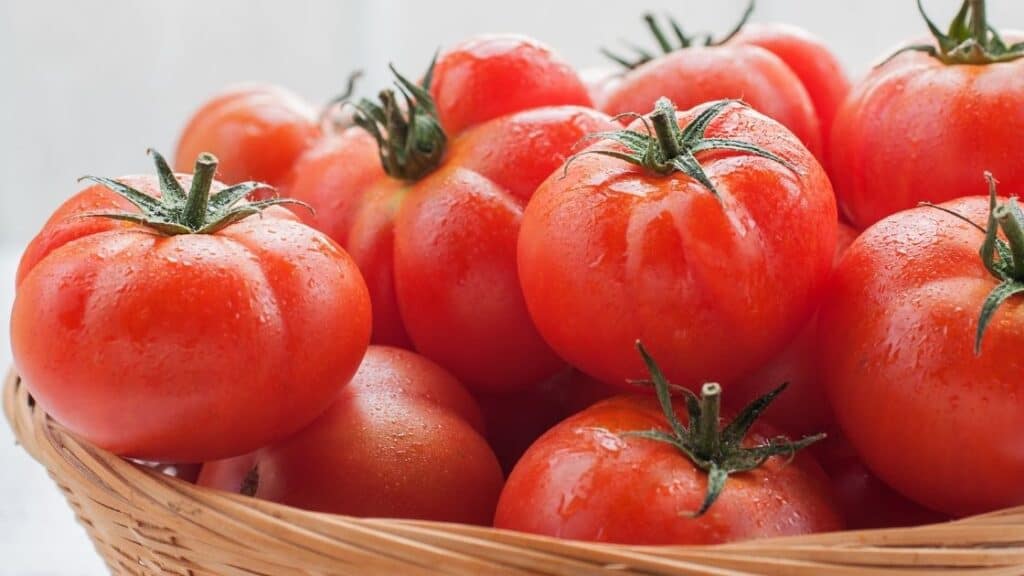 Monitoring your blood sugar is important especially for diabetics.

Tomatoes are a common food that is very popular.

Cherry tomatoes are quite sweet and contain a fair amount of sugar, so here’s whether tomatoes raise blood sugar.

Tomatoes do not raise blood sugar as they have a low glycemic index of 15.

The glycemic index (GI) refers to how much a food increases blood sugar.

Foods with a GI of 100 raise blood sugar a lot.

Tomatoes have a very low GI and so don’t raise blood sugar.

Examples of foods that are high in starch are rice, bread, potatoes, and sweet potatoes are very calorie-dense.

This makes them good at making you feel full and providing a good ‘bang for buck’ calorie-wise, which in my opinion is why they are stapled foods around the world.

However, for people who have insulin sensitivity issues such as diabetics these high glycemic index foods raise blood sugar.

And therefore, should not be consumed very often according to medical professionals at Healthline.com.

Another very common food is beans, peas, and lentils.

These are all types of legumes.

I did a detailed analysis of the different types of legumes and which ones are high and low glycemic.

I compiled all the data into helpful tables and lists in this article about whether legumes are low glycemic.

It covers chickpeas, soybeans, kidney beans, and about 15 of the commonly consumed legumes.

Why You Shouldn’t Eat Tomatoes? 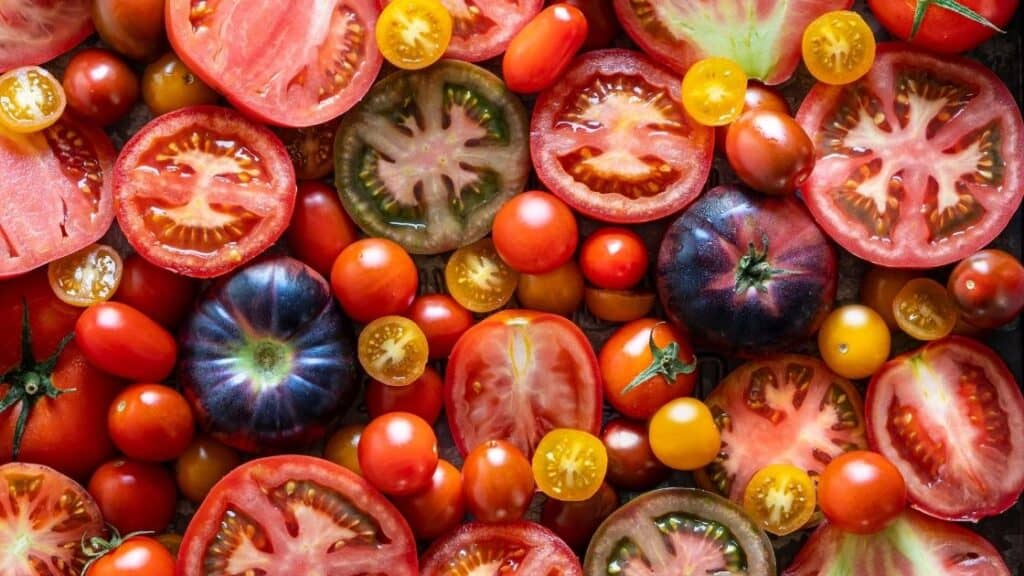 Certain foods can have pros and cons.

Tomatoes are a very popular vegetable/fruit and are consumed regularly by most people.

But, are there any drawbacks to eating tomatoes, and any reason why you shouldn’t eat them.

Tomatoes are perfectly fine to eat for all people.

But, a small percentage of people have an intolerance to tomatoes that can give them stomach cramps, bloating, and in some cases diarrhea and vomiting.

These people should avoid eating tomatoes.

Tomatoes are also quite high in vitamin C, which is very good as vitamin C has a host of health benefits.

But, high amounts of vitamin C, can have a laxative effect.

The amount of vitamin C is in the range of 15% to 30% of your recommended daily intake of vitamin C per half a cup.

So, as long as you don’t eat more than about 1.5 to 2 cups of tomatoes in one go you’ll be within the recommended daily intake of tomatoes.

Which means you won’t have the potential to get diarrhea from eating tomatoes.