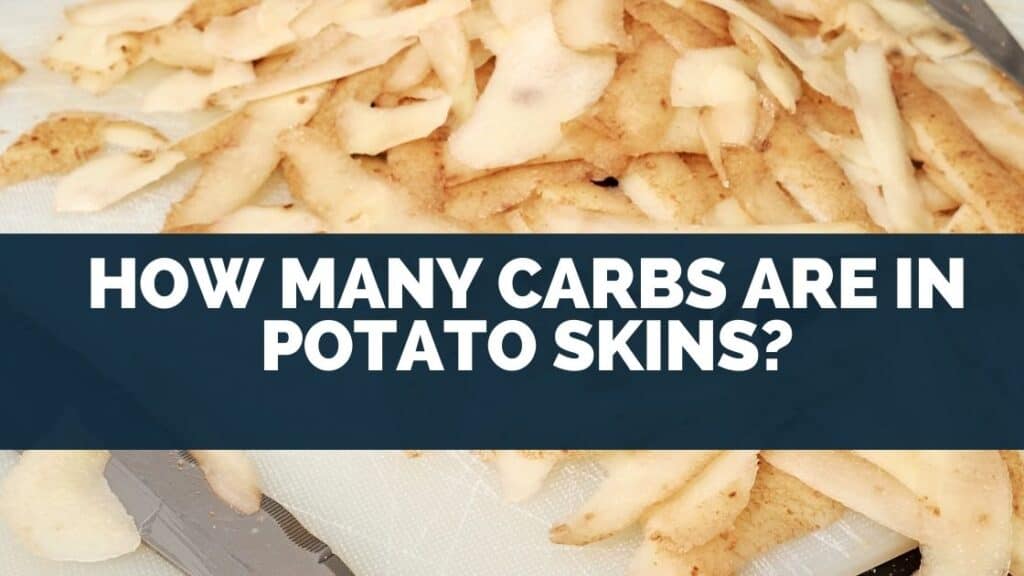 Potatoes are one of the most popular food crops in the world, nourishing us for thousands of years.

Produced by more than a hundred countries around the world, potatoes are a relatively affordable source of fiber, carbohydrates, vitamins, and minerals.

100 g of raw potato with the skin on contains 17.5 g of carbohydrates.

The fried skin of a medium 140g potato has 22g carbs (8% of recommended daily intake).

The carbohydrate content in potatoes varies depending on the cooking method.

Some might say potatoes have a bad reputation for being high in carbohydrates which might contribute to weight gain.

That’s because most of the potatoes we know of are fried into chips, tater tots, hash browns, and french fries!

Deep-fried potatoes attribute most of their caloric and carbohydrate content to the cooking oil.

Boiled or baked potatoes that have no added cooking fat are a healthy, nutritious snack loaded with vitamins and minerals.

It is the complex carbs that provide fuel to our bodies and slowly release energy throughout the day.

In their absence, our body will generate energy from protein and fat.

The recommended daily intake of carbs is 225g to 325g.

In contrast, a boiled potato has 20g of carbs, less than 10% of the recommended amount.

While potatoes grow in a variety of different sizes, the carbohydrate content in potatoes varies depending on their weight or size.

In addition, the cooking method can also change the carbohydrate content in potatoes.

Potatoes can be boiled, steamed, fried, grilled, baked, or microwaved, with or without the skin.

It is recommended to leave the skin on; the skin contains most of the fiber, about half of the entire potato!

For best nutrition, boiling or baking potatoes plain might be more suited to a low-carb, low-fat diet.

Go to top
Table Of Contents show
1 Are potato skins keto-friendly?
2 What is the nutritional value of potato skins?
3 Do potato skins have fiber?
4 How much fiber is in potatoes without skin? 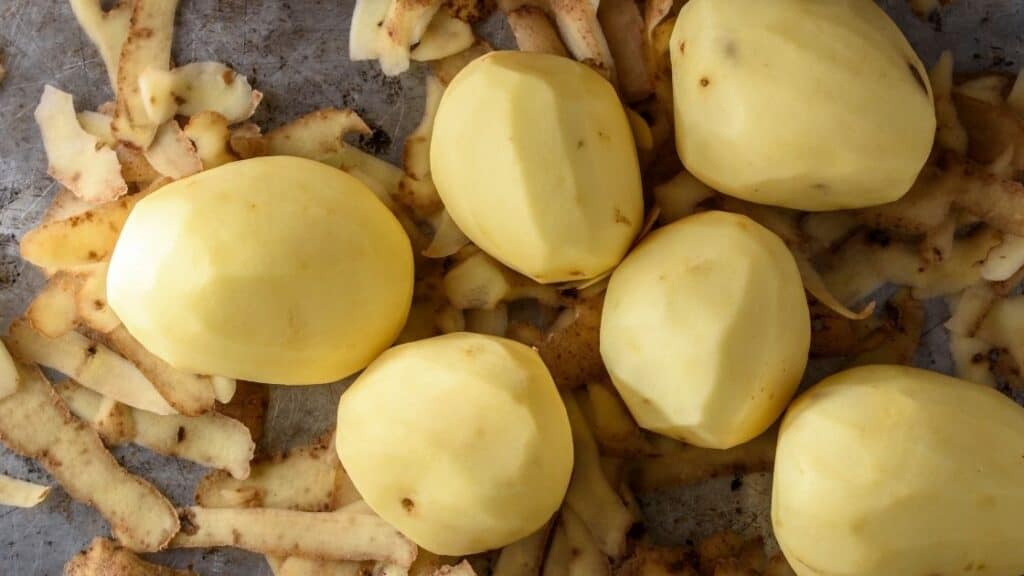 Total carbohydrate intake is kept below 50 grams per day on a typical ketogenic diet, and can go as low as 20 grams a day.

While there is no food off-limits on a keto diet, potato skins are relatively high in carbohydrate content and must be limited.

A fried skin of a medium potato contains 22g of carbohydrates, almost half the amount recommended on a typical keto diet.

The exact amount required to achieve ketosis tends to vary by individual.

With recommended carbohydrate intakes ranging from 10 to 60 grams per day, it depends on lifestyle, activity level, and general health. (Source)

Keto dieters who are more active might be able to eat more carbohydrates compared to people with sedentary lifestyles.

Potato skins can be keto-friendly if you carefully limit the amount of carbohydrate intake a day and stay within limits.

However, as a single skin from a medium-sized potato can give you almost the recommended carb intake for the day, it might be best to lay off potatoes if on a low or no-carb diet.

What is the nutritional value of potato skins? 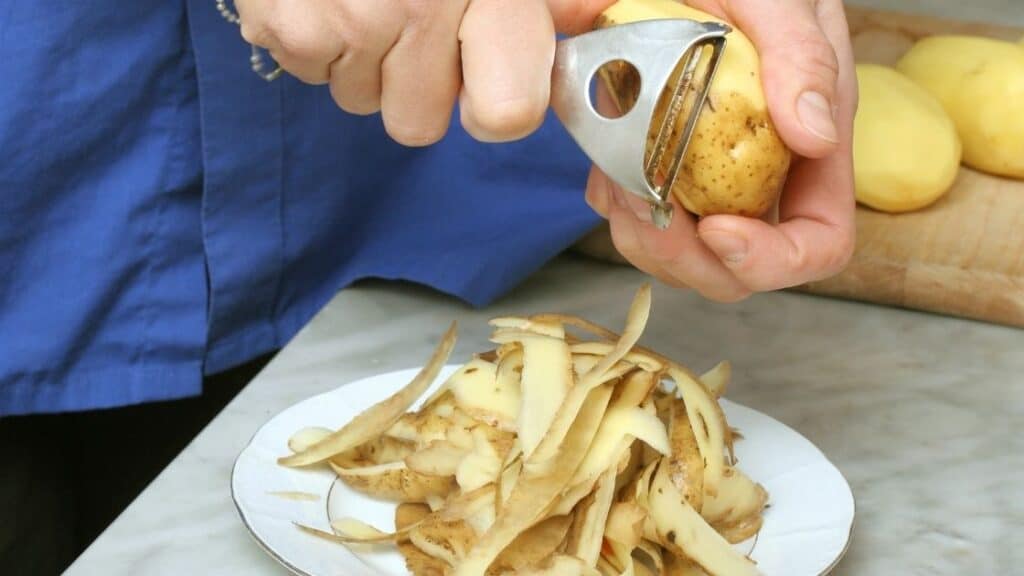 Potato skin is a potential source of useful and bioactive substances, such as antioxidants, pigments, and dietary fiber, vitamins, and minerals.

In addition, one medium potato provides 45% of the recommended daily intake of vitamin C, and 10% of vitamin B6.

In addition, according to the USDA food database, 100g of baked potato skins contain:

It is recommended to cook potatoes with the skin on to preserve the high nutrient content contained in skins.

Based on the USDA data, a whole potato with the skin on:

Scrub the potatoes thoroughly with a vegetable sponge or brush to remove any dirt, sprouts or blemishes.

Potatoes are tubers that grow underground whose skins might contain contaminants from the soil from which they grow.

The concentration of potassium is highest in the skin and just beneath it.

Potato skins account for one-third of the overall weight of potatoes.

A large potato weighs 11.5 ounces and contains 238 calories, with the skin of this potato containing between 24 to 36 calories.

Potato skins are a natural source of flavonoids, a type of phytonutrient that exhibits anti-inflammatory and antioxidant effects that protect the body from disease and infection.

One of the flavonoids found in potato skins is a compound called quercetin, which is known for its immune system stimulation and has been shown to have antiviral properties that can inhibit the release of histamine.

A 2016 study revealed that quercetin is effective for the treatment of bronchial asthma, allergic rhinitis, and anaphylactic reactions caused by peanuts.

The authors report that plant-extracted quercetin is a key ingredient in many potential antiallergic drugs.

Do potato skins have fiber? 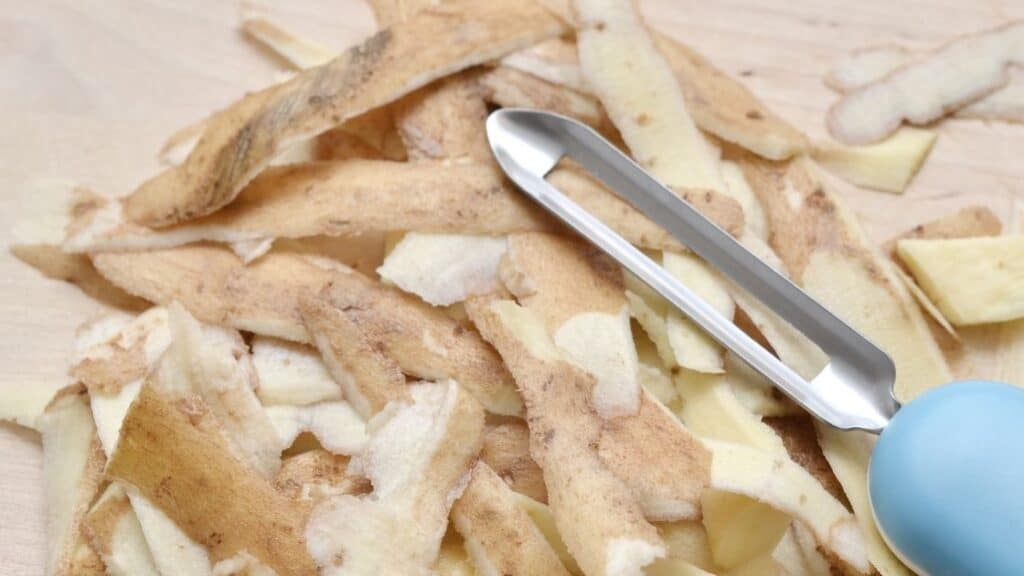 Potato skins are rich in fiber, accounting for about half of the fiber contained in the entire potato.

A raw potato skin weighing about 38grams will contain about 1 gram of fiber.

The fiber present in a cooked potato depends on the cooking method.

Some common ways of cooking potatoes are:

Fiber is critical to the maintenance of a healthy digestive system, balancing the gut and preventing constipation.

It helps give the stool bulk, promotes healthy bowel movements, and feeds the healthy gut bacteria in your colon responsible for keeping infections away.

Fiber is cellulose that can be insoluble or soluble.

According to The American Journal of Clinical Nutrition published in October 2015, fiber can also help relieve diverticulitis, irritable bowel syndrome, hemorrhoids, and other intestinal conditions.

Dietary fiber has also been found to have the potential to reduce the risk of colon cancer.

In addition, up to 60% of magnesium in the body is in the bones.

According to the National Institutes of Health (NIH), eating potato skins can help maintain bone density and may help reduce the risk of osteoporosis in postmenopausal women.

Potassium in potato skins also has a beneficial effect on the skeletal system by reducing calcium loss from bones, leading to an increase in bone mineral density.

In a study published in the Nutrition Journal in March 2015, phosphorus consumption may support increases in bone mineral content and bone density.

Calcium from potato skins is needed to support the structure and hardness of teeth and bones.

The copper, iron, and zinc in potato skins help the body synthesize collagen, which is needed to hold bones together.

How much fiber is in potatoes without skin? 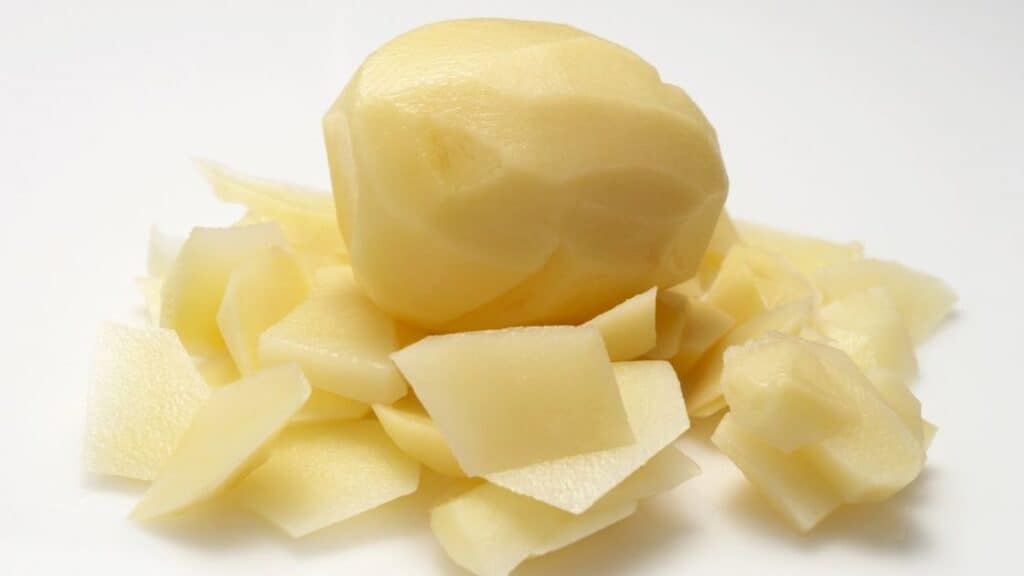 A 1-cup serving of potatoes without the skin on contains 3.2 grams of dietary fiber, about half of the fiber found in a whole potato with the skin on.

The skin accounts for about half of the dietary fiber.

The amount of dietary fiber in potatoes without the skin depends on the type of potato and the cooking method. (Source)

The recommended daily intake of fiber on an adult 2,000-calorie diet is 25 to 30 grams.

In contrast, the average fiber intake of an American is 15 grams.

One small size of potato (138 g) provides eight percent of the daily value.

Dietary fiber is one of the most important factors in weight management.

They improve satiety and suppress appetite.

The daily value for fiber also depends on age and gender.