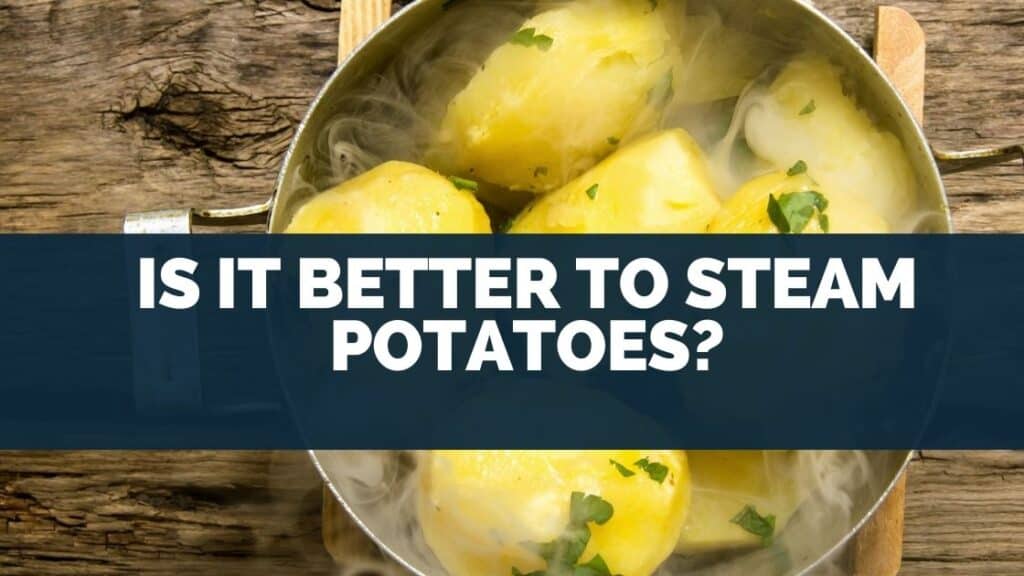 There are various different ways to cook potatoes.

In general, each method is for a different recipe.

Today we will look at steamed potatoes and whether they’re the best way to cook them.

It is not better to steam potatoes.

However, they have slightly more nutrients than boiled potatoes.

Therefore, steaming potatoes isn’t the best way to cook them but is better than steaming them.

In this article, I will provide a side-by-side comparison of the nutrients found in steamed/boiled potatoes compared to baked potatoes, as well as, explain whether steamed potatoes are healthy, and which has more calories.

Go to top
Table Of Contents show
1 Are Steamed Potatoes Healthy?
2 Is It Healthier to Boil or Bake Potatoes?
3 Which Is the Healthiest Way to Cook Potatoes?
4 Baked Potato vs Boiled Potato Calories 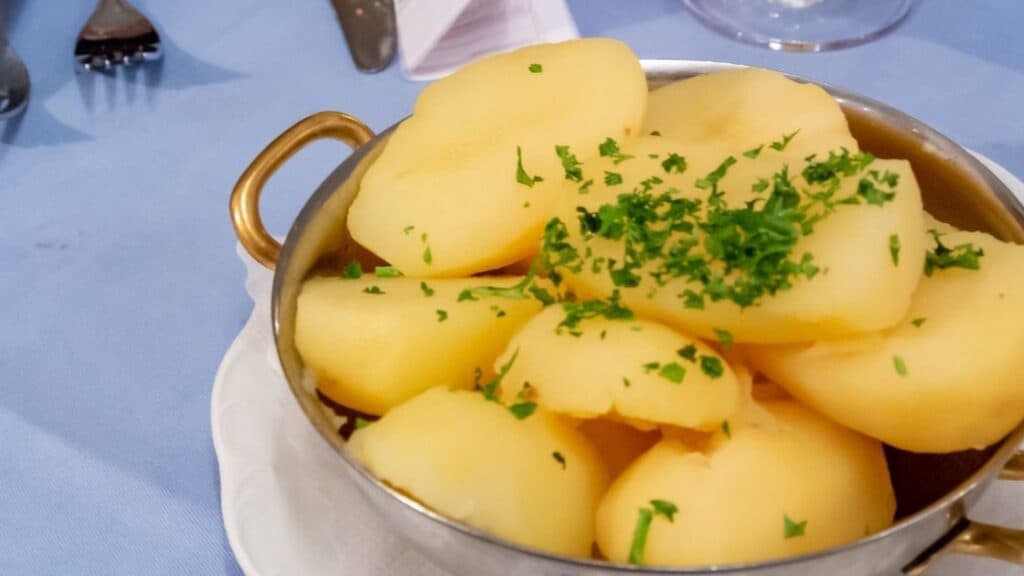 Steaming potatoes makes them quite moist and you may be wondering if steamed potatoes are still healthy to eat.

Based on my research here’s what I found.

However, potatoes, in general, are high in calories and contain quite a lot of carbohydrates.

Therefore, they can be better or worse depending on if you’re trying to reduce or increase the calories and carbohydrates you consume.

Potatoes and other root vegetables such as sweet potatoes, and cassava are starchy vegetables.

Starch is a kind of carbohydrate that is quite high in calories.

Therefore, you don’t need to eat a lot of them to sustain yourself.

And they are quite filling compared to other foods. Other starchy foods are bread and rice.

You may be trying to lose weight, or put on weight.

If you’re trying to lose weight you may decide to not consume potatoes because of how calorie-dense they are.

But, if you’re trying to put on weight potatoes can be a good option, also because they are calorie-dense.

Potatoes are high in various nutrients, however, there is not currently any data on exactly how many nutrients steamed potatoes contain compared to baked potatoes.

The only data available is for boiled potatoes.

The process of boiling and steaming potatoes is very similar.

So serves as a useful comparison.

However, in my opinion, boiled potatoes have fewer nutrients than steamed potatoes because they are submerged in water during the entire cooking process.

Many nutrients are water-soluble, and so more nutrients would be removed during boiling than steaming.

Therefore, the best comparison is between baked and boiled potatoes, here’s a table showing a side by side comparison:

Both baked and boiled potatoes contain such a low amount of the following nutrients that it’s in effect 0% of your the recommended daily intake:

From the data, it can be seen that there is quite a bit of difference in the nutrients in baked potatoes compared to boiled potatoes.

But, some nutrients are very similar and only differ by 1% to 2%.

Here’s a table that shows the percentage difference in nutrients between baked potatoes and boiled potatoes.

A positive number indicated baked potatoes have more of this nutrient.

A negative number indicates a baked potato has less of this nutrient.

An average of all of the nutrients shows that baked potatoes have 0.5% of your recommended daily intake per 100g than boiled potatoes.

Is It Healthier to Boil or Bake Potatoes? 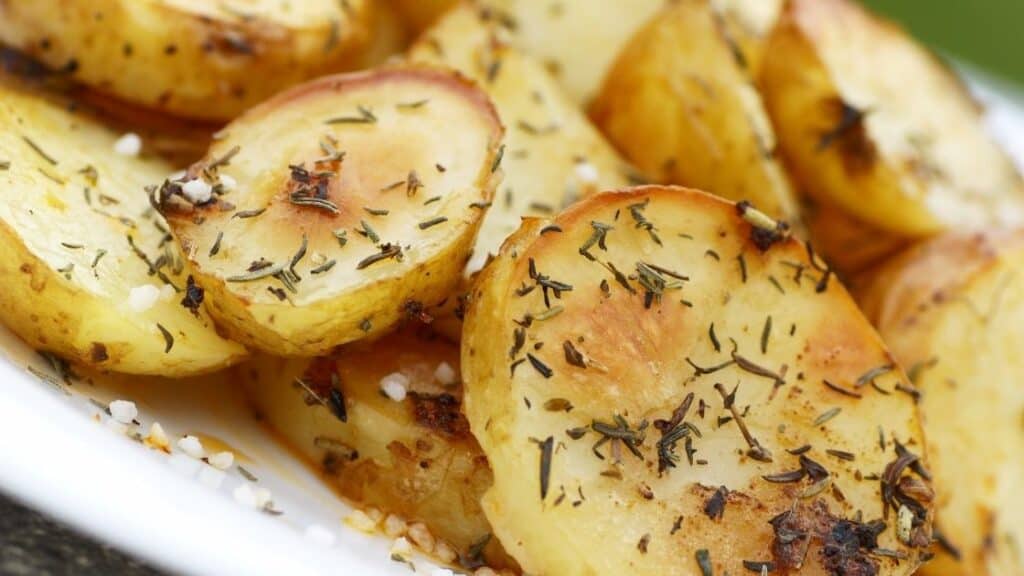 Boiling potatoes is required for various recipes such as potato salad.

But, it’s important to know what’s healthier: boiled or baked potatoes. I looked into the nutrient differences and here’s what I found.

On average, baked potatoes contain 0.5% more of each of the recommended daily intake of beneficial nutrients compared to boiled potatoes.

But, each nutrient is very different.

Those that are a lot higher in baked potatoes compared to boiled potatoes are:

Nutrients that are significantly LOWER in baked potatoes compared to boiled potatoes are:

When potatoes sit in water which happens when they are boiled, some of the starch comes out.

Also, you may have noticed that potatoes oxidize and turn brown when peeled and/or cut and left exposed to the air.

One solution to stopping them from turning brown is to submerge them in water.

This creates a barrier between the potatoes and the air.

This is especially helpful if you are wanting or needing to prepare potatoes ahead of time.

For example, if you have a spare 5 minutes, or are preparing a large batch of potatoes for a dinner party, catering event.

This is because restaurants typically do a breakfast, lunch, or dinner service that is a short window of time.

Therefore, they are under strict time requirements.

And so peeling, and chopping them the day before dramatically reduces the prep time.

But, it’s important not to soak potatoes for too long.

I explained this in detail in another article about how long to soak potatoes.

Which Is the Healthiest Way to Cook Potatoes? 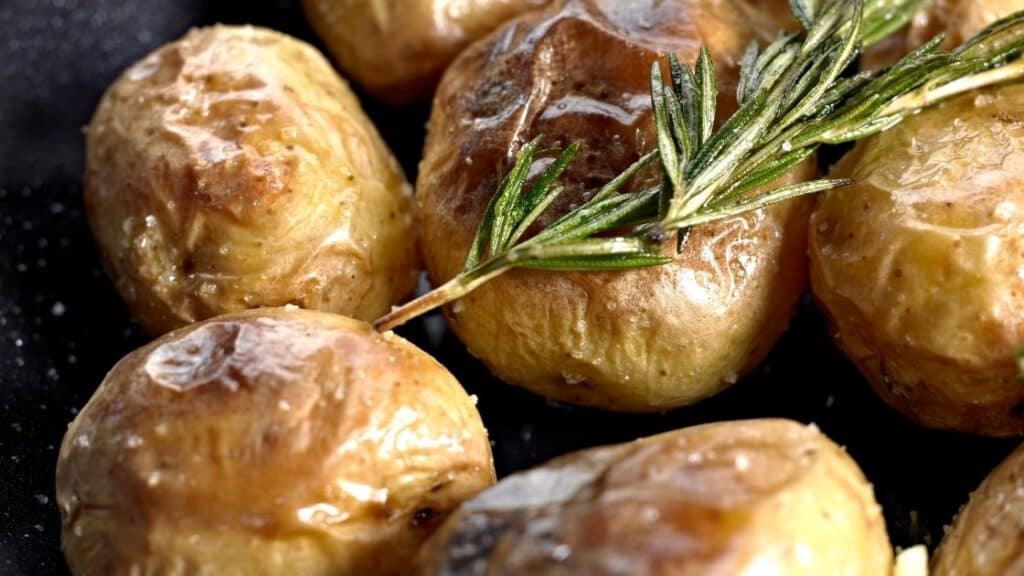 Potatoes are nutritious and many people find them delicious.

But, cooking them in various ways does change how many nutrients potatoes keep after cooking.

So, what is the healthiest way to cook potatoes?

Baking potatoes is the healthiest way to cook potatoes.

However, boiled and steamed potatoes still contain a fair amount of beneficial nutrients.

There are various nutrients that are higher in boiled and likely steamed potatoes.

The reason I say likely is that currently there isn’t any data about the nutrients in steamed potatoes.

But, in my opinion, it’s reasonable to assume that the water used to boil potatoes takes out the nutrients.

And steamed potatoes are also covered in water during the cooking process.

Therefore, which is healthier for you can depend on the overall nutrients you consume in your diet.

For example, you may be getting a good amount of potassium-based on your diet.

And therefore steamed or boiled potatoes can be ok, even though they have less potassium than baked potatoes.

To know for sure you would need to look closely at exactly what you eat, and how much of the recommended daily intake of each nutrient you are getting from the foods you typically eat. 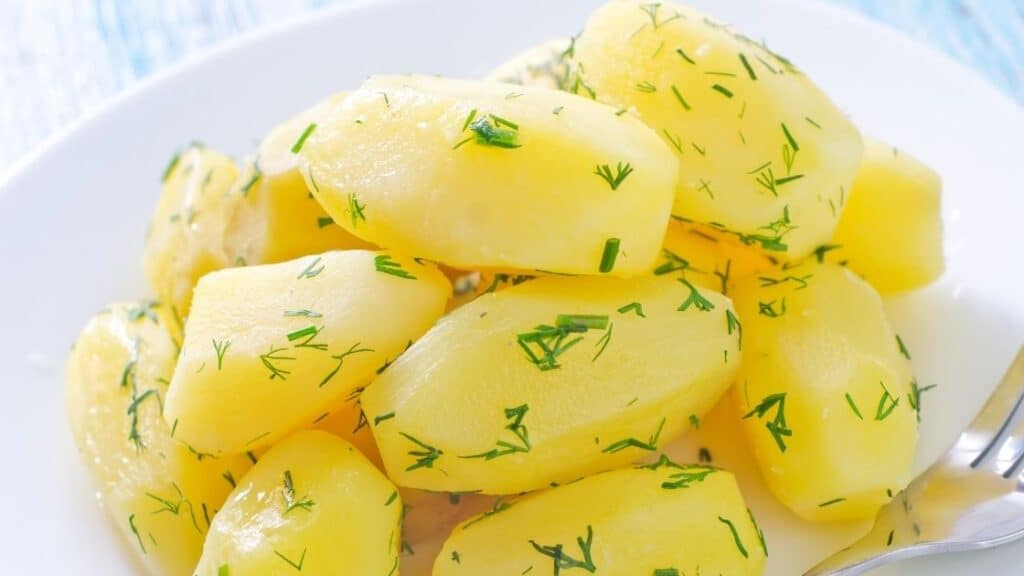 Interestingly, the calories can differ based on whether you boil or bake potatoes.

Here’s a summary of which contains more calories, and how much.

This difference in calories is likely due to the starch coming out in the water.

It’s common to soak potatoes in water or wash them to remove the starch.

This is a similar process to washing rice.

It also has the effect of causing potatoes to keep their shape better when cooked.

As well as some others which I have explained in this article about the reasons to soak potatoes.

I also cover how to soak them, as there are a few tips and tricks that can make potatoes taste better and have a better texture.

Starch is a type of carbohydrate that is found in significant amounts in potatoes, and other root vegetables such as sweet potatoes.