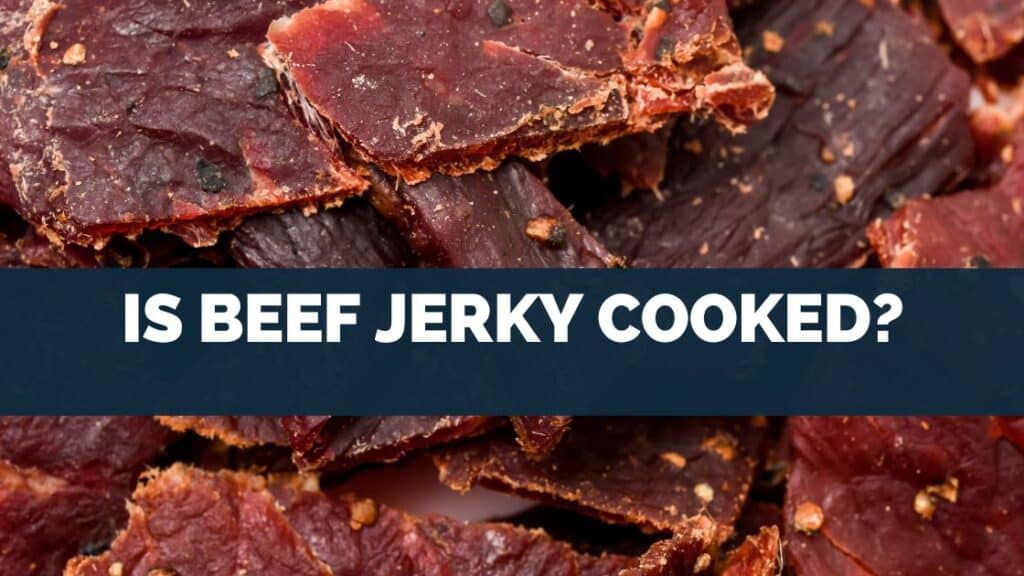 Yum! Beef jerky is a fantastic snack for people on the go, and best of all, it is found in almost every gas station and grocery store!

Why is its shelf life so long, and is beef jerky cooked?

While beef jerky is not raw, it is not cooked traditionally overheated.

Beef is marinated in a curing solution and then dried to create this popular snack food.

Salt is typically added during this drying process to stop bacteria from growing before the meat fully dries.

Beef Jerky has a delicious flavor, doesn’t require refrigeration until opened, and is exceedingly light to carry.

Jerky stored properly can remain edible for a full year.

By smoking or curing, some jerky is even better preserved.

These techniques will also influence the flavor profile of the jerky.

Although there are many different kinds of jerky, all commercially available varieties are almost cooked and safe to store for a long time.

In addition, beef jerky is completely safe to consume in its original form.

And even though cooking beef before dehydration is uncommon, when done correctly, the dehydration alone is sufficient to eliminate the bacteria and render your jerky “not raw.”

Is Jerky Cooked Or Raw? 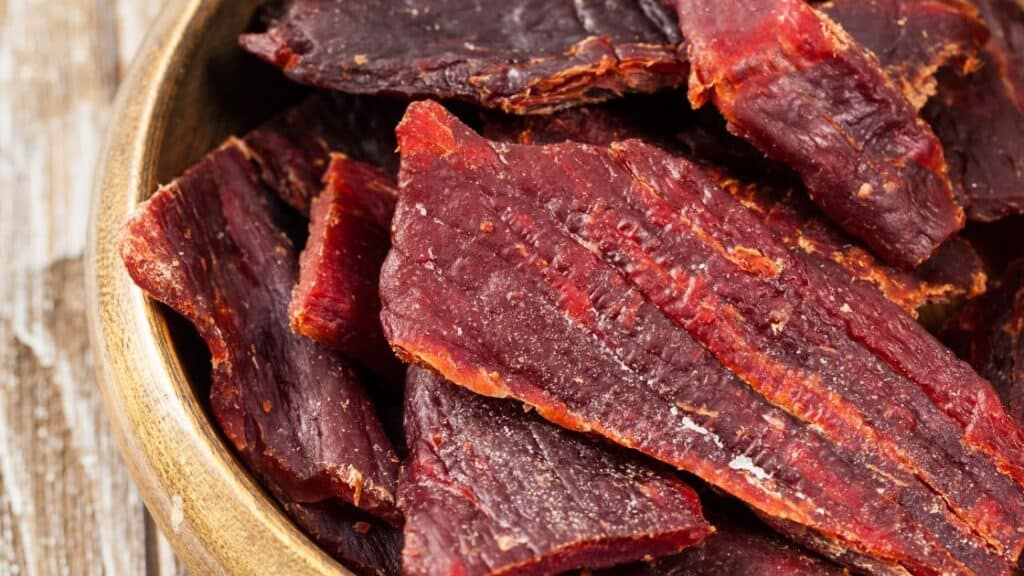 If you are wondering whether jerky is cooked or raw, the answer is that it is neither!

Beef jerky isn’t raw because it has undergone processing that renders it as safe to consume as traditionally cooked meat, yet it is not cooked over a flame.

Instead, dehydration is used to create beef jerky.

This procedure removes the vast majority of its moisture and gives it the special ability not to go bad.

However, some claim you should always cook beef jerky before dehydrating it.

But, this is simply unnecessary because properly dehydrated jerky is completely safe to consume.

Additionally, precooked meat jerky has a different appearance (and even flavor) from regular jerky, which can turn off some people.

While beef jerky may not be the most gourmet of snacks, it can be a delicious and enjoyable treat.

When choosing beef jerky, look for a brand that uses lean cuts of meat and simple ingredients.

This will help to ensure that the jerky is not too tough or greasy.

Once you have found a brand you like, experiment with different flavors to find the ones that suit your taste.

Other factors, such as the size and thickness of the strips, can also affect your enjoyment of beef jerky.

Ultimately, the best way to enjoy beef jerky is to find a product and style and then savor it slowly. 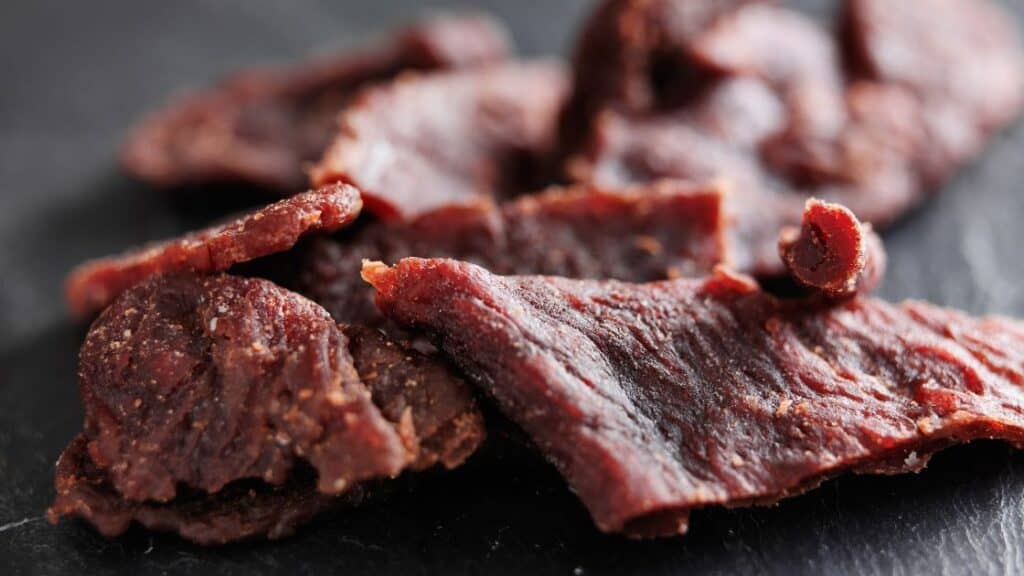 Many that enjoy beef jerky often ask the question, “is dehydrated meat considered cooked”? And the answer is no.

However, dehydration affects meat in a manner that is quite similar.

Convection ovens are comparable to dehydrators.

However, the dehydrator excels at functioning at lower temperatures and can maintain a temperature of plus or minus a few degrees for an extended period.

This will ensure even cooking and the creation of your desired jerky product.

In addition, It is possible to overdo meat dehydration.

When jerky is over-dried, it loses its intended soft inside and becomes overly crunchy and rigid.

It’s not a good idea to leave the meat in the dehydrator for an excessive amount of time because it can reduce the shelf life of your jerky.

Is Beef Jerky Cooked Before Dehydrated?

The shelf life of beef jerky is impressive; they stay unrefrigerated in stores for months

! But is beef jerky cooked before dehydrated?

No! Beef jerky is often not cooked before dehydrating.

While some experts suggest precooking the meat, most commercially available jerky isn’t cooked.

Nonetheless, USDA advises pre-cooking your meat before dehydrating it as a safety measure.

This is done to remove any microbes from the meat that would make it unsafe to consume.

Is Beef Jerky Made Of Real Meat? 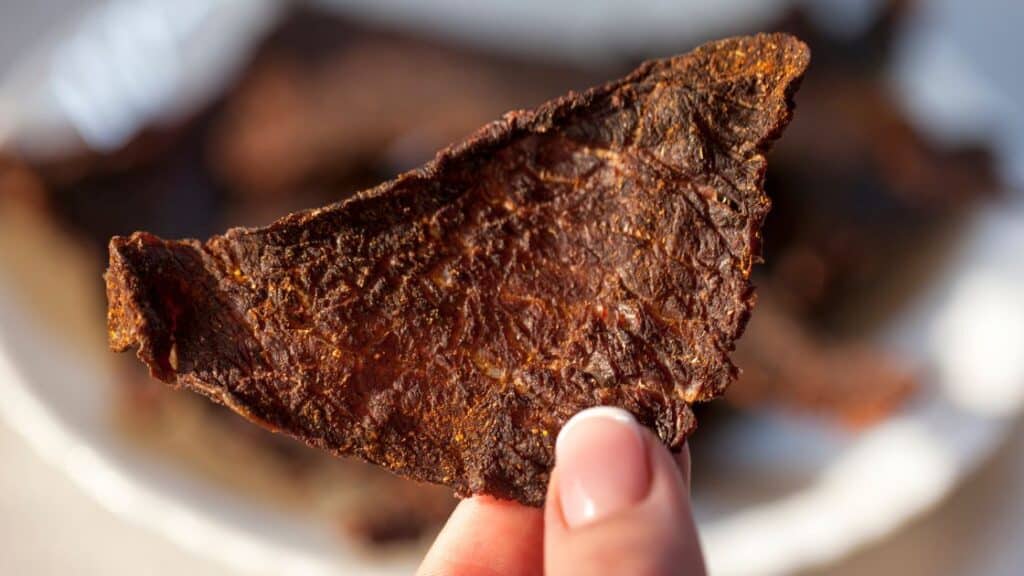 Jerky is a popular snack found all over the world. But is beef jerky made of real meat?

Yes, it is! Lean-trimmed beef is sliced into strips and dehydrated to prevent spoilage.

The Quechua term ch’arki, which means “dried, salted meat,” is the ancestor of the English word “jerky.”

Simple “jerky” can be made with just salt to prevent bacterial growth and a low-temperature drying process.

Commercially produced jerky is frequently marinated, prepared with a spice rub, or smoked over low heat (typically under 70 °C/160 °F).

In store-bought jerky, sweeteners such as brown sugar are frequently used.

A pound of meat or chicken must be dried out to the point where it weighs around four ounces because of the moisture removal required to make jerky.

That is why jerky might cost more per pound because it is so rich in nutrients.

The same nutrients in a large piece of meat can be found in only a few thin slices of jerky.

There is no restriction on the kinds of jerky one can manufacture because the preparation method turns meat into jerky.

Because fat won’t dehydrate efficiently, it will shorten the shelf life of jerky.

Unquestionably, the most common meat used to make jerky is beef.

Although jerky may be made using a variety of beef cuts, the leaner ones usually turn out the finest.

Most people prefer beef jerky; therefore in addition to the companies’ traditional flavors, you can buy it in a variety of mouthwatering flavors like spicy or barbecue.

There’s nothing like homemade jerky! You can learn how to make beef jerky by watching this video.

Can You Get Sick From Undercooked Beef Jerky? 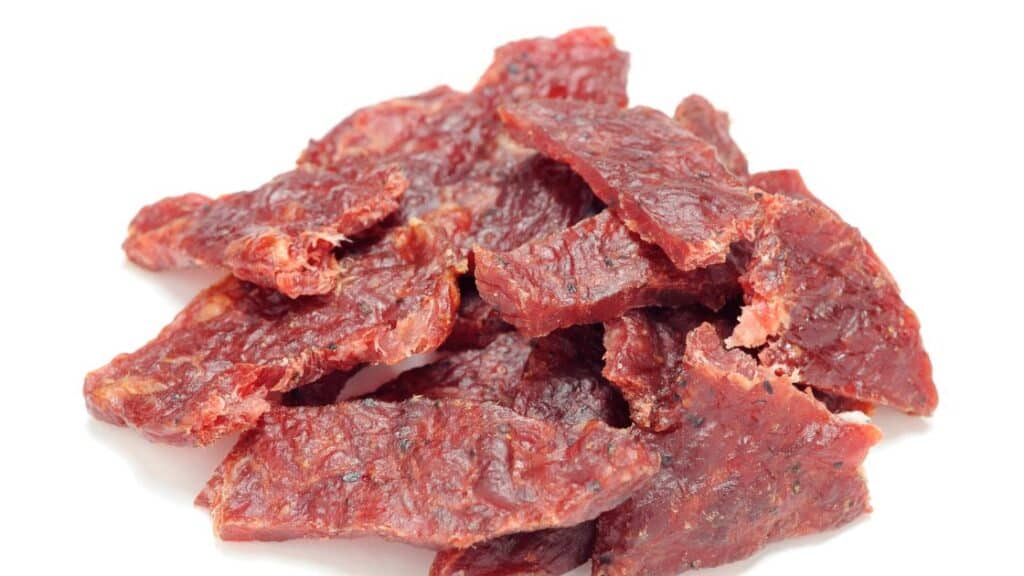 Some people precook their beef jerky before dehydration, but can you get sick from undercooked beef jerky?

Beef jerky is traditionally made by dehydration, not cooking, and getting sick is possible if you don’t adequately dehydrate it for a long enough.

This would make the jerky more dangerous and more likely to deteriorate.

However, if you store it correctly, even uncooked jerky is typically edible.

Beef jerky can also develop mold if left in a moist environment.

Several molds are considered dangerous pathogens, and eating moldy jerky can cause a foodborne illness.

Depending on the foundation meat, some of the brown molds on the jerky may be unnoticeable.

Beef jerky should not be consumed in excess because it is high in sodium and could pose the same health hazards as eating processed meats.

An increased risk of malignancies, including gastrointestinal cancers, has been linked to foods high in processed and cured red meats such as beef jerky, according to numerous studies.

Jerky made at home should be packaged in a dry environment and should have its moisture level verified before packaging.

Also, look for high-quality, well-known components when buying beef jerky from the market.

Most commercial jerky has its moisture level analyzed, and some even add a desiccant to the package that can be thrown away once it is opened.

It is well known that artificial flavors and preservatives are used in lower-grade jerky to improve the product’s appearance and flavor.

Lean strips of meat, a few seasonings, and no fillers are the only ingredients of high-quality jerky.

It should be free of nitrates, preservatives, and monosodium glutamate.