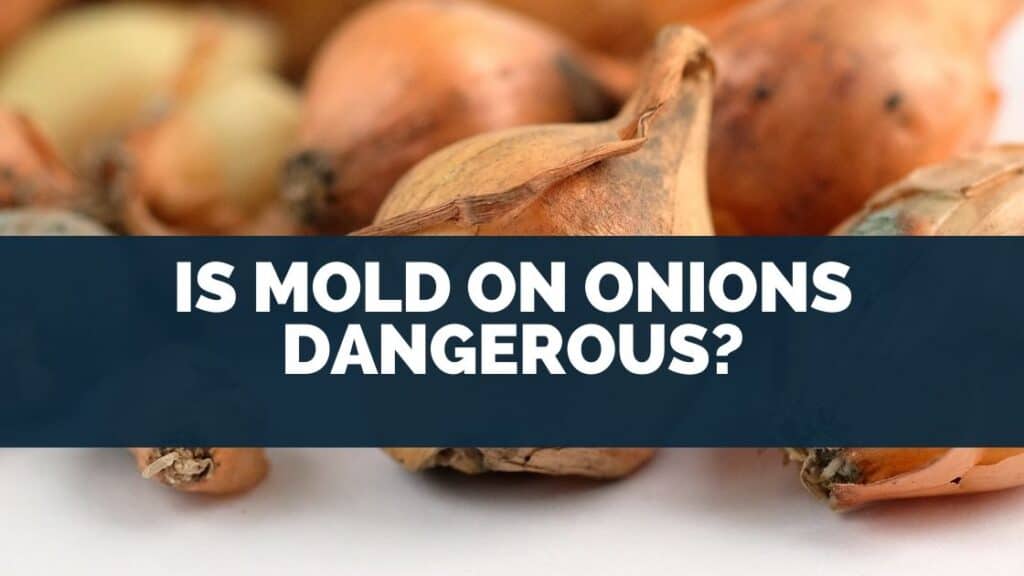 Fruits and vegetables can develop mold on the surface of the skin, this mold puts roots into the vegetable and produces microscopic seeds called spores.

There are a few different types of mold that can affect onions.

Here’s a summary of whether mold on onions is dangerous to consume.

Mold on onions is dangerous to consume.

The mold that shows as black spots is a common mold.

It’s safe to remove the areas that are affected with black spot mold and consume the rest according to the USDA.

With all other molds, the onion should be discarded and not consumed.

There is a range of symptoms you can get from eating the untouched parts of onions, so below I will explain what these are, as well as, more info about what black-spotted mold on onions is, and how to reduce the chances that onions will develop mold.

Go to top
Table Of Contents show
1 What Happens if You Eat Moldy Onions?
1.1 What to do with moldy onions?
1.2 How to keep mold from forming on onions?
2 Black Spots on Onion
3 Can You Eat Onion with Black Mold?

What Happens if You Eat Moldy Onions? 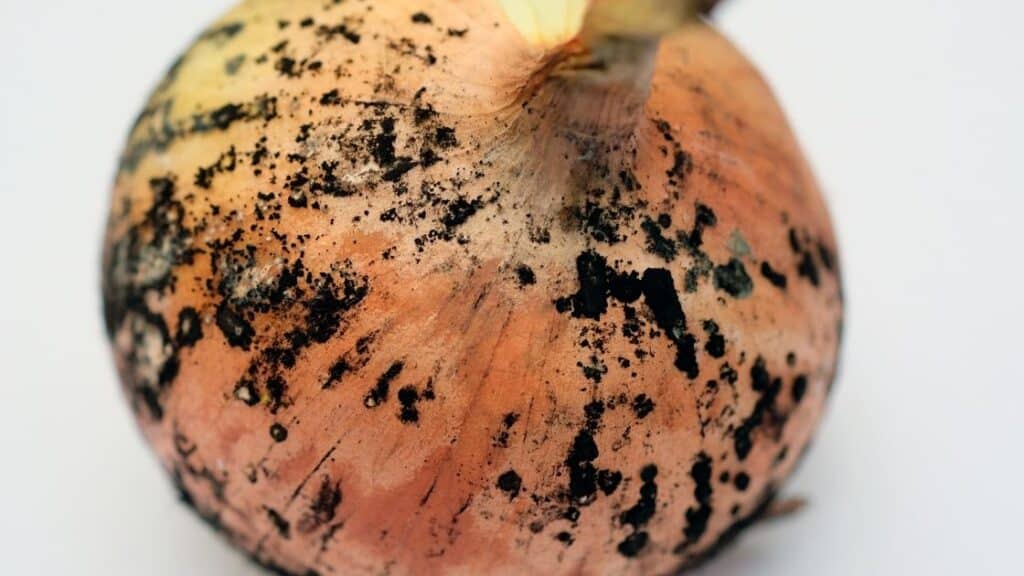 Moldy onions have an unsightly appearance and you generally wouldn’t want to eat them.

However, you can cut away these moldy parts and eat the rest.

So, I thought I’d explain what happens if you accidentally eat moldy onions or the unaffected parts of moldy onions.

Some molds are incredibly toxic and can be fatal.

With black-spotted mold, you can cut away the affected parts and eat the rest.

All other molds don’t consume even the unaffected areas.

By the time the mold is visible on the surface of whatever it’s growing on there is already a network of microscopic roots that grow pretty much through the whole fruit or vegetable.

But, these aren’t visible to the naked eye.

And the areas of the fruit or vegetable appear unaffected

With black spot mold, the roots aren’t toxic, and it’s fine to consume the affected regions.

but, some mold is incredibly toxic, and consuming these microscopic roots by eating the unaffected areas can cause the symptoms explained above and can be fatal according to medical professionals.

Here’s a video that zooms really close into molds and shows how they grow.

From the video you can see that before the central part of the mold forms some molds can grow tiny roots very far and wide:

Each type of mold grows a bit differently.

Some start to be visible on the surface before a wide network of roots has grown.

Whereas, others grow very wide before the first signs of mold on the surface.

Interestingly, many molds are considered beneficial and are grown to be used as supplements, medicine and certain types of food such as cheese and tempeh.

As you may know, tempeh is made by fermenting soybeans with mold which grows and binds them together to turn it into a nutritious high protein food.

But, many molds are incredibly toxic.

The only way to know if the mold on onions is potentially harmful is to become very familiar with the different kinds of molds.

And to be 100% certain you’d need to look at it under a microscope or send it to a lab to do a chemical analysis to help identify what it is.

Therefore, if the mold is anything other than black-spotted mold which is common on onions, as well as many fruits and vegetables it’s best to throw it away.

One of the most consumed fruits/vegetables is tomatoes.

I researched what to do if mold is growing on tomatoes in this article about whether moldy tomatoes are safe to eat.

What to do with moldy onions?

It’s best to throw away any onions that are moldy.

It is possible you won’t get sick if you cut away just the moldy parts.

But, it’s not worth the risk considering it is possible that the mold is an incredibly toxic type that can be fatal.

A small percentage of people are allergic to mold spores.

If they open a bag of onions that has mold in it and inhale some of the spores they can get hay fever-like symptoms.

For example, they will get a runny nose, their eyes will water, and they can sneeze.

So, throwing them away will also limit the number of spores in the air.

How to keep mold from forming on onions?

The spores that form as mold grows are released into the air.

They will float around and settle on everything.

If what they settle on is food, they can begin to take root if the conditions are right.

Generally, it’s impossible to control the spread of mold spores as there are many many opportunities for spores to land on them.

And covering once you get them home won’t have much of an effect.

Throwing away moldy fruits and vegetables does help as it will greatly reduce the number of mold spores in the air.

But, the main ways are through controlling the temperature and humidity where you store them.

The University of Georgia has created an amazing article that explains the precise temperature and humidity conditions that foster black mold growth on onions in this article. 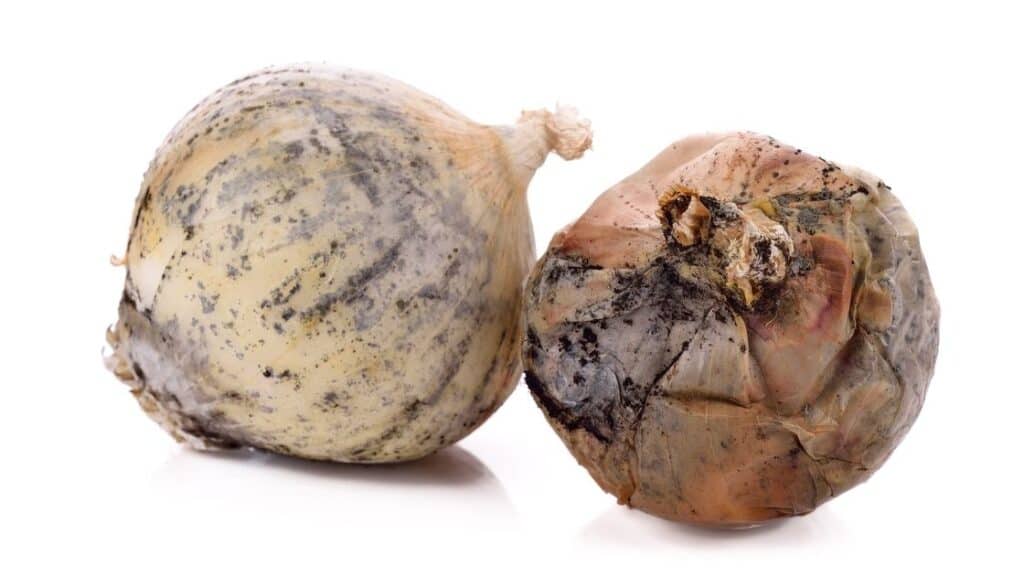 I’ve noticed on a few occasions some black spots form on the onions I buy.

Typically, it only forms in a very thin layer on the peel, and once I remove it there is little if any black mold on the flesh of the onion. It’s very easy to remove by discarding the outermost layer of the onion.

But, what is this type of mold?

Black spots on onion are the mold species Aspergillus niger.

This is a very common mold that grows on many different fruits and vegetables.

Unlike some molds, if you remove the affected areas it’s perfectly fine to consume the rest of the onion according to the USDA.

The general recommendation from health professionals such as the Cleveland Clinic is to discard any fruits and vegetables that are moldy.

They say certain hard foods like cheeses can be fine with mold provided you remove one inch (2.5 cm) around the mold.

This does not include cheeses such as blue cheese, also called blue vein cheese which is manufactured to have mold in them.

Soft foods like bread, fruits, and some vegetables promote the roots of mold to grow very far and wide.

So, cutting away one inch around the mold won’t remove the vast majority of the mold.

Because onions don’t last forever there are a few ways to preserve onions.

One such method is to dehydrate them and turn them into onion powder.

It has the added advantage of being quick to cook with because you don’t need to peel and chop onions every time you want to add onion to a recipe.

When using onion powder many people wonder how much of it is equivalent to one onion.

I answered this question in this article about how much onion powder equals one onion.

Can You Eat Onion with Black Mold? 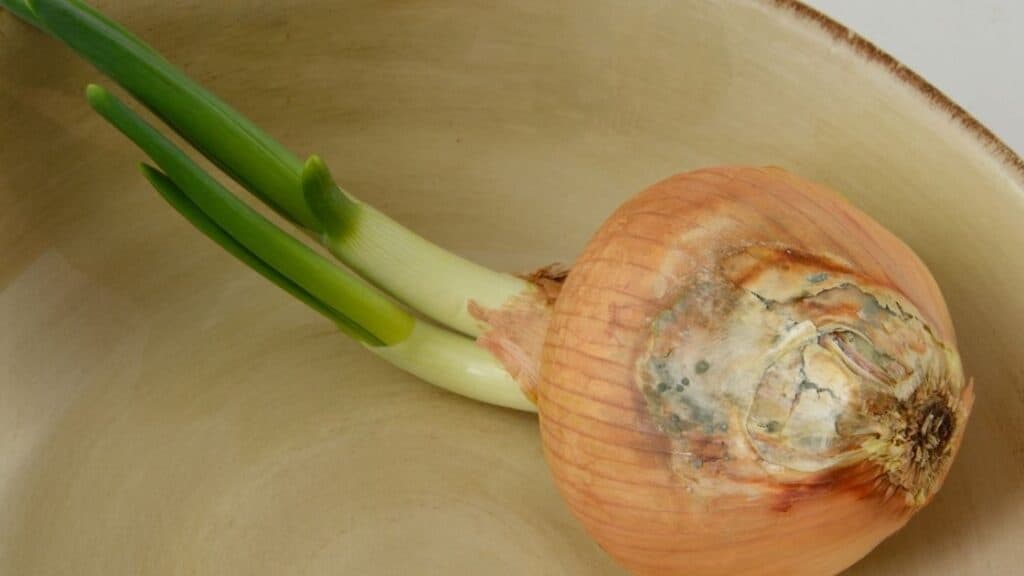 In the past I’ve chopped away the moldy parts of food and consumed the rest without any issues.

But, I’ve recently learned that there are some potentially harmful molds that you shouldn’t do this with.

So, I looked further into it to see if it’s possible to eat an onion with black mold.

It’s OK to eat an onion with black mold provided you cut away the parts that have mold according to the USDA.

Generally, it forms on the peel of the onion.

But if it’s had time to grow it can be in the outer 2 to 3 layers or more of the onion.

The good thing about onions is you can remove one layer at a time to remove the black mold.

If it’s only on one part of the onion though you’ll generally save the most onion by cutting the area with the black mold out.