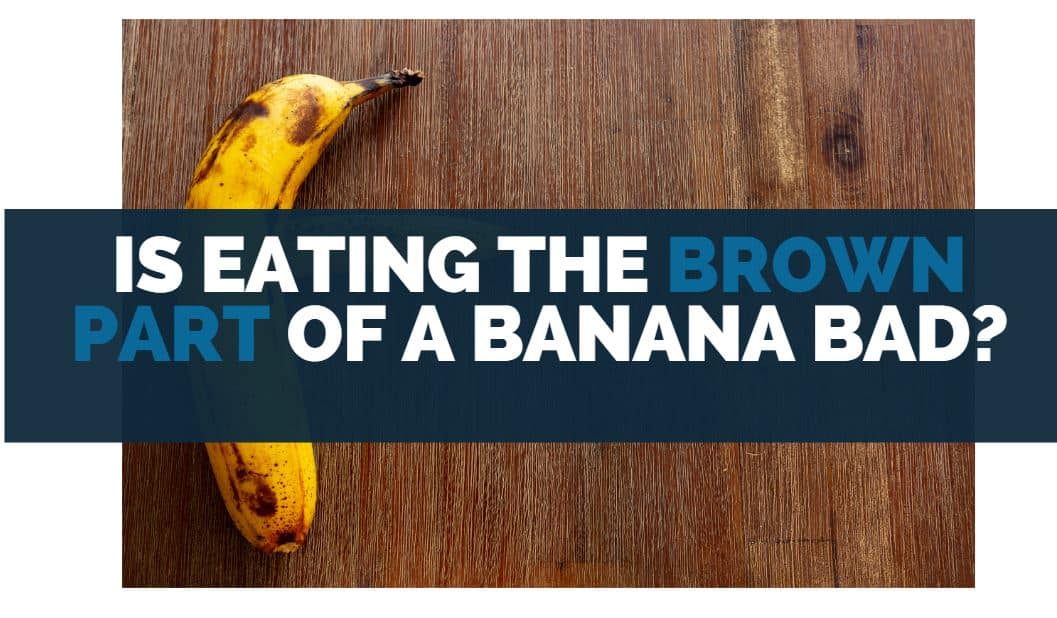 Bananas are known for how sweet, and delicious they are. But, oftentimes one end, or the entire thing will be brown, and doesn’t really look that appetizing.

So, I researched into whether it was bad to eat the brown part of the banana and put together my extensive research into this article.

So, is eating the brown part of a banana bad?

There are no adverse health effects from eating the brown part of a banana.

Brown bananas have been used by many generations in baking without any harmful effects.

But, Mould is more likely to grown on parts of the banana that have turned brown, and you should eat mould because it can be toxic.

Exactly what the brown part is, and why it isn’t bad for you were also some key questions I wanted answered.

So, read on where I will explain what it is, and why it’s fine to eat it.

Go to top
Table Of Contents hide
1 Why can you eat the brown part of a banana?
2 A banana that has brown parts because it’s been bruised or crushed
3 A banana that is brown because it’s over-ripe.
4 Is the brown part of a banana better for you?
5 How do you stop a banana from ripening too fast?
5.1 Putting Bananas in the fridge
6 Peeling Bananas and storing them in the freezer (only for smoothies, banana ice cream or baking)
7 Conclusion

Why can you eat the brown part of a banana?

The brown part of a banana can happen in one of two ways:

In either case research done by the University of Connecticut shows that there are no adverse effects to eating the brown part of a banana, but there are some risks which will be explained further below.

This is a banana that you leave in your back pocket and sit on.

Or, that you accidentally put next to a book in your carry bag that puts in a dent in it.

This brown part of a banana is from a bruise.

The brown part of the banana resulting from a bruise like this isn’t generally as sweet as those brown parts that have come from when the banana get’s over-ripe.

There’s nothing harmful about eating brown parts of a banana, according to the University of Connecticut.

Other fruits like apples develop a bitter taste where they are bruised. And normally you have to cut this part of the apple off.

But, luckily this doesn’t happen if your banana is bruised.

However, if you leave bruised fruit for too long they will attract small fruit flies, and mold can begin to grow.

The University of Connecticut recommends not to eat bananas that have mold on them, because some varieties can be toxic.

Much like some of those mushrooms you find in the wild that can be deadly, or make you vomit.

So, inspect it before you eat it to see if there is any mold growing on it.

Here’s an image of what mold growing on a banana looks like. 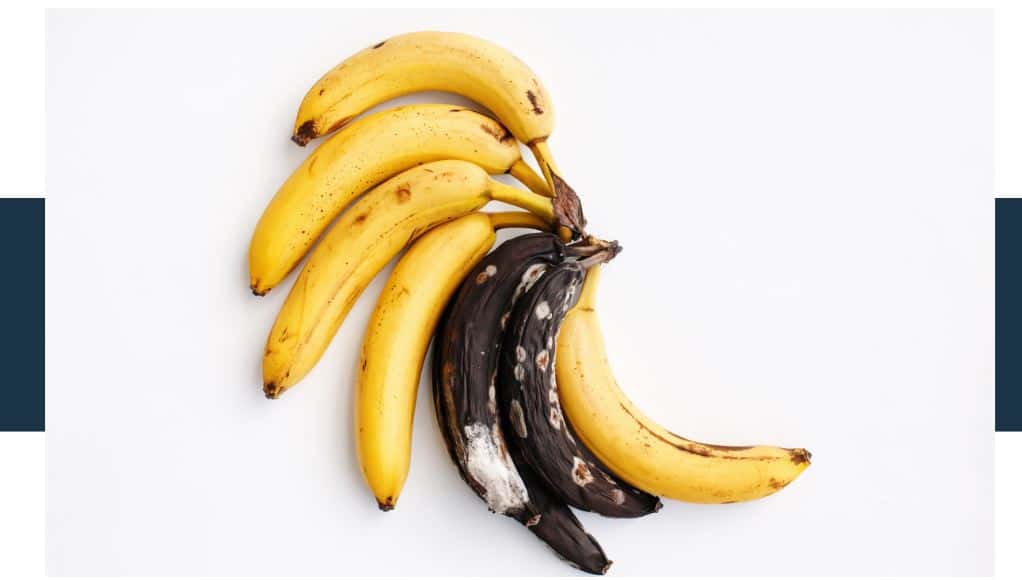 When you touch it some varieties can turn to powder. And it can look like a small moss or plant growing on the surface of your banana.

It’s best to throw these types of bananas out into the garden, and wash your hands after you touch them.

A banana that is brown because it’s over-ripe.

As a banana naturally ripens it will turn browner and browner until it eventually turns completely black. Yuck

As this happens the skin of the banana can start to split open, which naturally lets air inside.

The air then chemically reacts with the banana and it starts to rot.

The entire inside of the banana will be wet, and extremely sweet.

Almost too sweet to eat for most people.

Bananas that have reached this stage of their development have been typically used in baking for many generations without any issues, so they are perfectly safe to eat.

I personally find them too sickly sweet, and would only add them to a baking recipe instead of sugar. 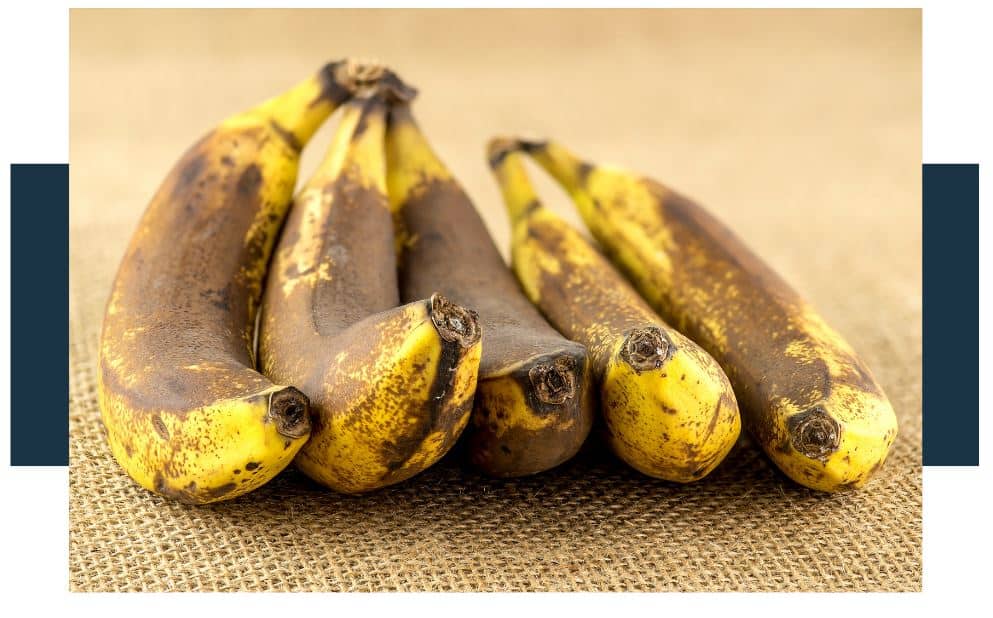 After a long enough exposure their insides will turn gooey and leak out of the banana skin until there is nothing left inside.

And just as it goes brown, then mold can begin to grow on it.

So, before you eat it make sure you don’t eat the mould on this type of brown banana as well.

And if you see mold growing on it you can cut that section of the banana off, or throw in the rubbish or compost.

Don’t take risks eating something that looks too funky

Is the brown part of a banana better for you?

According to Livestrong.com the brown part of a banana has more antioxidants than bananas that haven’t been bruised.

Or, ones where the flesh of the banana is still completely yellow.

But, they say that the antioxidants are created from converting other healthy nutrients in the banana.

So, as part of a healthy and balanced diet on balance they aren’t healthier or less healthy than completely yellow bananas.

How do you stop a banana from ripening too fast?

If you’re not wanting to eat your ripe bananas for a day or two, because you’ve already got some meals planned out, then you can stop the from getting over ripe by:

Putting Bananas in the fridge

When you put your bananas in the fridge the cold temperature slows down chemical reactions.

As you may have learned at school, when the air is hot it moves around very fast, when it is cold it moves round very slowly.

As the molecules bounce around they form chemical bonds with other chemicals.

For example, Na bumps into Cl, and produces salt – NaCl.

Although you don’t need to know anything too complex. When the molecules are moving slower their molecules bump into each other less, and less chemical bonding happens.

So, the banana doesn’t break down and ripen as quickly.

So, putting them in the fridge is a good idea.

They will still ripen but just a lot more slowly.

Peeling Bananas and storing them in the freezer (only for smoothies, banana ice cream or baking)

You can stop them from ripening all together by freezing them.

But, they can be hard to eat when they are completely frozen.

When you thaw them out they turn into mush, so they won’t be the same as a standard ripe banana.

When you freeze bananas they are best for making smoothies, banana ice cream and baking.

Because in smoothies you blend them into tiny pieces and wont notice their mushy texture. 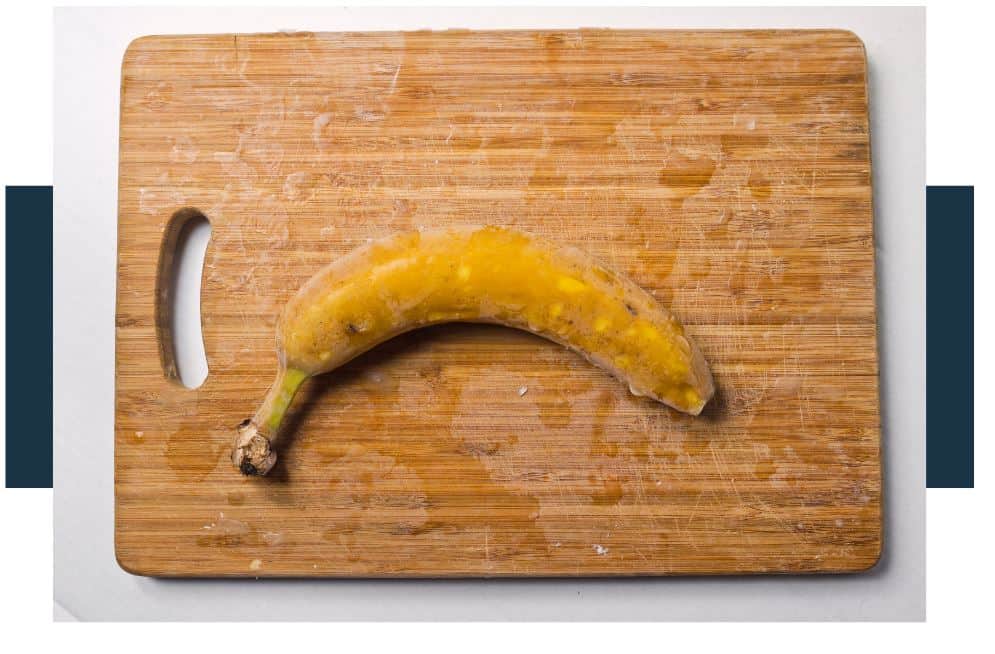 Banana ice cream is like regular ice cream and has a soft consistency, which frozen bananas are ideal for. When using them for baking you blend them with flour and other ingredients and you won’t notice the mushiness.

Bananas can turn brown in the freezer if you don’t prepare them correctly, which many people have reported online.

I recently put together an entire article about this particular issue and I also give a step by step guide about how to freeze bananas for long term storage – for about 3 to 6 months.

You can read that article by clicking here Do Bananas Turn Brown in the Freezer?

Eating the brown part of a banana is not bad.

The brown part of a banana comes from bruising, or as the banana goes from being ripe to overripe.

A banana that is ripe from bruising isn’t sweeter.

But, as a banana goes from ripe to overripe, it becomes sweeter and sweeter.

In both cases you want to avoid eating mold if you find it growing on the banana.

The brown part of the banana isn’t normally healthier for you but, it is definitely not bad for you.

If you want to store bananas so they don’t go ripe faster than you can eat them you can store them in the fridge, or freeze them for long term storage.