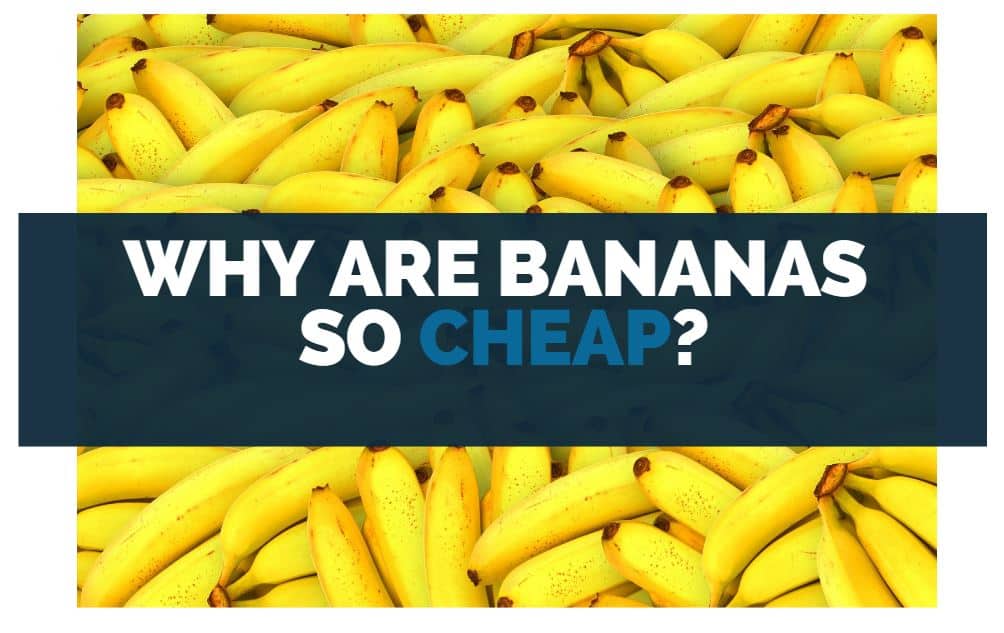 I love eating bananas because they are easy and fast to eat and are deliciously sweet. And the fact they are so cheap, makes them a no brainer to eat almost everyday.

But, I wondered why they are so cheap, so I researched the topic and put together this helpful article to explain why bananas are so cheap.

So, why are bananas so cheap?

So, the land can be reused very easily. Because less labor is required it costs less to produce them.

In my research I came across many theories about why bananas are so cheap, but ultimately I found it comes down  production expense.

So read on, to discover why bananas are so cheap to produce which makes them cheap to buy in the store.

Go to top
Table Of Contents show
1 What makes bananas so cheap to produce?
2 Bananas Don’t Have A Growing Season
3 Banana Plants Have A Short Lifespan
4 Bananas Have A Reliable Harvest Time
5 It’s Super Easy To Produce New Banana Plants
6 Bananas Are Easy to Harvest And Easy To Transport
7 Related Questions:
7.1 Will the price of bananas go up in the future?
7.2 Are organic bananas more expensive than regular?
8 In Conclusion

What makes bananas so cheap to produce?

Exactly why they are cheap to produce is because of the unique way that bananas grow.

I will explain exactly why bananas are so cheap in the sections below , so lets get to them.

Bananas Don’t Have A Growing Season 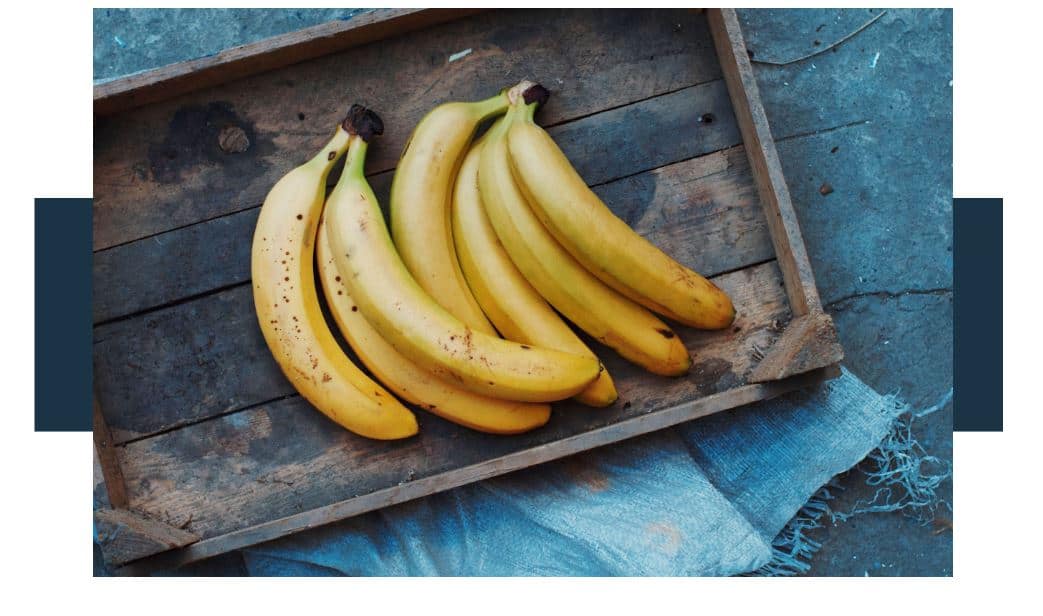 Bananas will grow and produce fruit year round.

This makes it easy to keep a constant supply of bananas throughout the year.

Unlike other fruits such as apples which only fruit once or twice a season, and ripen only for two to three weeks in the entire year.

Although, if you have an entire orchard full of apples, each tree will fruit at a slightly different time.

They still have a window of a few months where they are consistently fruiting.

So, when you want to buy them in the off season they are more expensive.

And this overall drives the price of other fruit up.

Banana Plants Have A Short Lifespan

Other kinds of fruits produce many fruits all over them. Whereas bananas will produce one or more bunches of bananas per plant.

And the subsequent bunches are normally not as big or as the first bunch.

After bananas have produced their initial bunches of fruit they don’t produce any more, according to Gardeningknowhow.com.

So people that grow bananas will cut down the whole banana tree after they have harvested the bananas.

They grow quite quickly, and produce fruit within four to eight months from a small plant, according to Nola.com.

Depending on how good the climate is for the particular species of banana. Most bananas will produce the biggest and best fruit in the tropical climates.

In cooler climates they don’t fruit as large and some won’t grow at all.

When you cut down a banana tree at the base, a new banana tree will grow in its place, and begin producing another round of fruit.

Bananas Have A Reliable Harvest Time 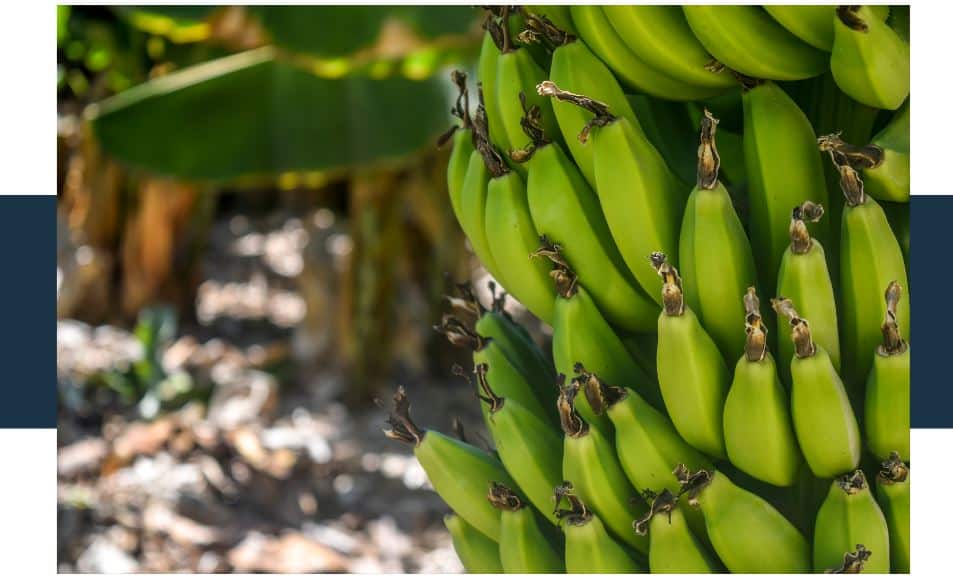 Each piece of land has a unique climate. And the soil quality makes certain banana trees fruit faster or slower.

But, once a farmer or grower has a pretty good average of how long a banana tree will take to produce bananas ready for export, they can produce year round bananas.

They do this by planting new plants one after another.

So, they plant one batch one month, then one batch after a month. Then when they harvest them they can harvest one batch in a month, and then harvest another back the next month.

This is another reason why growers can have a consistent supply.

When you compare it to other seasonal fruits such as apples, or oranges, they are far better.

Oranges for example only fruit once or twice a year, and then the land the orange tree is sitting on can’t be used for anything else.

Because there’s a huge orange tree in the way.

Their stem and roots are easy to remove and the whole plant is light and easy to move around.

It is also very easy to cut down bananas, you can use one or two swipes of a machete and cut it down completely.

They get produced from suckers.

Which are small bulbs that form at the base of an adult banana tree. A sucker is a miniature banana tree that has roots.

You simply remove the sucker from the adult tree using a spade and plant it into the ground. An adult banana tree will produce unlimited amounts of suckers.

Here’s a quick video that shows how it’s done:

This multiplies how easy it is to grow bananas overall because you don’t need to spend a lot of time germinating the new plants in a nursery or have a large greenhouse to protect the baby banana plants.

Making them even easier to produce.

Bananas Are Easy to Harvest And Easy To Transport 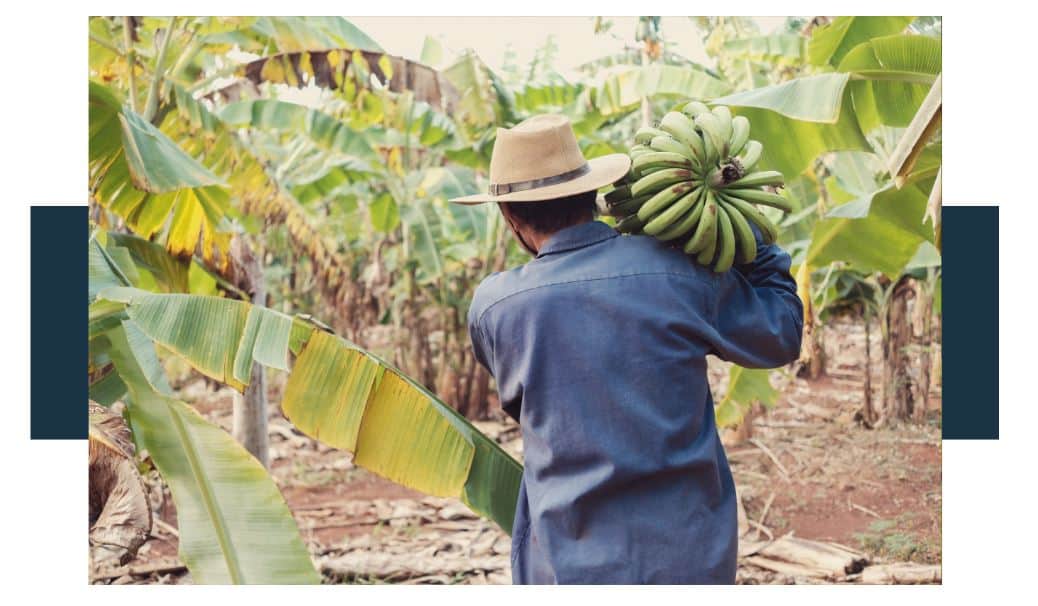 Because of the way bananas grow they are very easy to harvest and transport.

All the fruit grows on one thick central stem that connects them all together.

The end also acts as a handle which you hold and drag along the ground behind you.

The base has a thick stem that you can drag along the ground without damaging the bananas, and makes them much lighter to move around the orchard. This makes the harvest time dramatically easier and faster.

Which cuts costs, making bananas cheaper in the store.

Also, when you trim off a bunch of bananas from the main stem they all stick together.

Unlike other fruits you don’t have to be as careful moving them around, because the stems are soft and you can put the entire bunch of bananas flat, and also stack them one on top of the other without damaging them, virtually at all.

Other fruits like apples and oranges are susceptible to bruising when you pour them onto a conveyor belt, or place them in your basket.

They also need to be individually labelled which adds a lot of time to the harvest process.

On top of that, you have to pick each one individually.

Although, fruit pickers can work quite fast, they can’t catch up to how easy it is to harvest bananas.

With bananas you hold the base with one hand and with the other hand you just chop the top of the stem with a machete and let the end hit the ground.

So, that doesn’t break off any of the bananas.

Will the price of bananas go up in the future?

Unfortunately no one can predict the future.

But, the price of bananas has remained what they are for many many years.

And there doesn’t seem to be any reason why their price would go up.

Banana producers have easily been able to keep up with demand, and with the increasing population there will be more demand for bananas.

But, there is abundant land to grow them up, and they will continue to be very easy to grow. 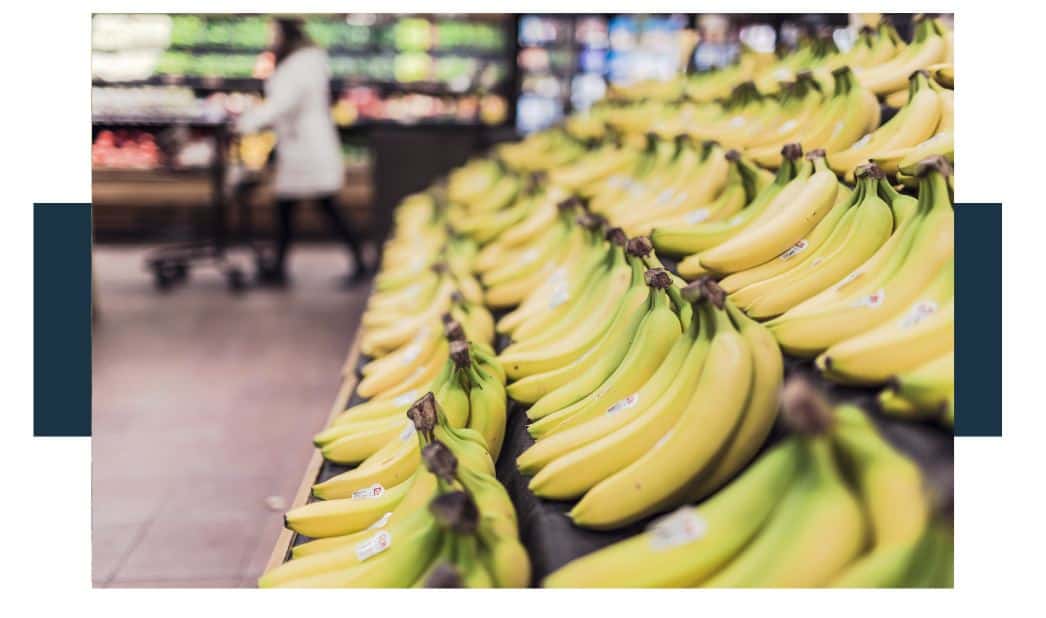 This is because they are higher demand, and the cost to produce them can slightly higher.

You can read it by clicking here What Is an Organic Banana?

Bananas are cheap because:

So, they’re much cheaper to produce than other types of fruit, and growers are happy to charge the prices they do.