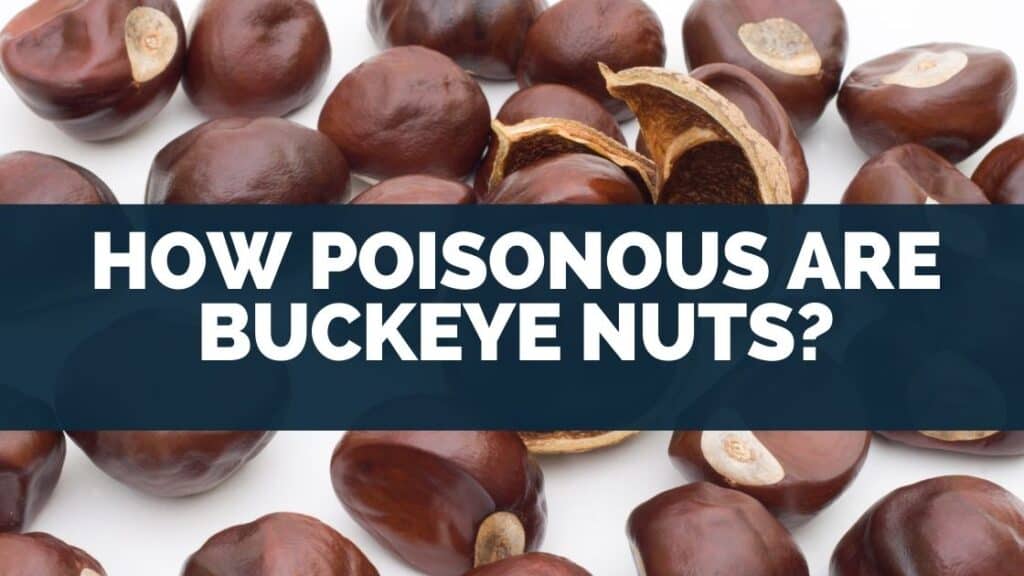 If you’ve ever visited or lived in the American West, you might have seen the round canopy trees with products resembling hazelnuts.

But are buckeye nuts poisonous, and can you eat them?

If you eat one nut, you may not experience severe poisoning, but consuming several nuts will lead to muscle weakness, vomiting, and intestinal discomfort.

Buckeye nuts are poisonous because they contain glycoside aesculin, saponin aescin, and alkaloids.

This article will elaborate on the historical, botanical, medicinal, and cultural features of buckeye nuts.

What Are Buckeye Nuts? 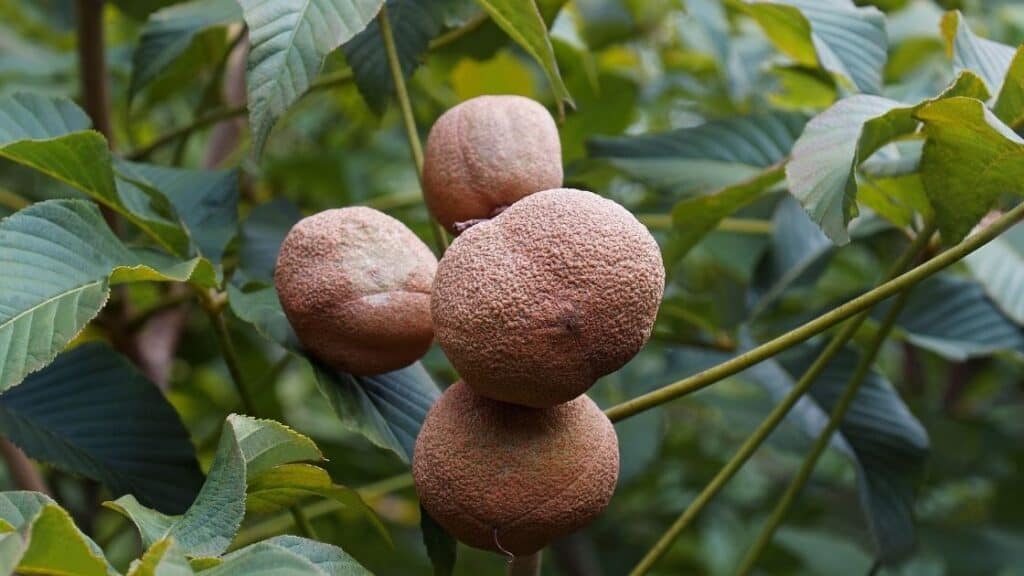 Buckeye nuts belong to the Soapberry family, with most trees shorter than 15 m (50 feet).

They have a dense crown, mostly oval or round, and are famous for their beautiful blossoms in the spring.

Its flowers grow in large clusters with creamy to greenish-yellow colors, and the striking orange leaves in the fall make it pretty spectacular.

The tree is also known as the stinky buckeye or fetid buckeye due to the foul smell the leaves give out when crushed.

It produces fruits in rounded capsules with a thick and leathery husk.

The smooth glossy nuts are covered in mace-like shells.

There are various buckeye species in North America, including:

These buckeye groupings are different in terms of appearance.

While most of them have five leaves, the Texas Buckeye has seven.

Each variation has seed pods with different shapes and surfaces. 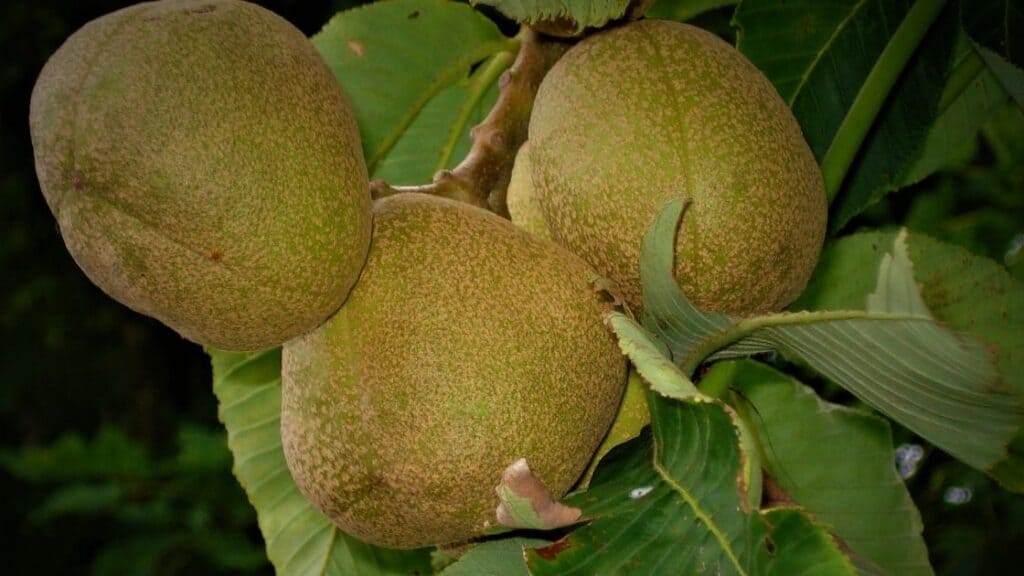 So, if you consume the seeds without proper preparation, you’ll experience serious side effects due to the toxic materials.

Because of these mild poisonous properties, the fruits can cause severe problems in the intestines or the nervous system if consumed in large numbers.

In addition to being harmful to human beings, buckeye nuts are harmful to all other animals, except for squirrels.

These rodents somehow manage to bypass the ill effects that poison other critters.

It might be that only half of the nuts are poisonous, and the squirrels know which half to eat.

Whatever the reason, if other animals such as horses, cows, and pets eat them by accident, they may get sick or even die of the poison.

Symptoms like seizures, vomiting, tremors, excessive drooling, and diarrhea are common among pets and animals.

In addition to the nuts, all parts of the tree, including the leaves, sprouts, and bark, are poisonous, which is why herbivore animals like horses and cows are at great risk of getting poisoned.

The most important poisoning symptoms of buckeye nuts among humans are:

These signs can occur if you eat too many seeds, which is unlikely because it has a terrible bitter taste.

Are Buckeyes Poisonous To Touch? 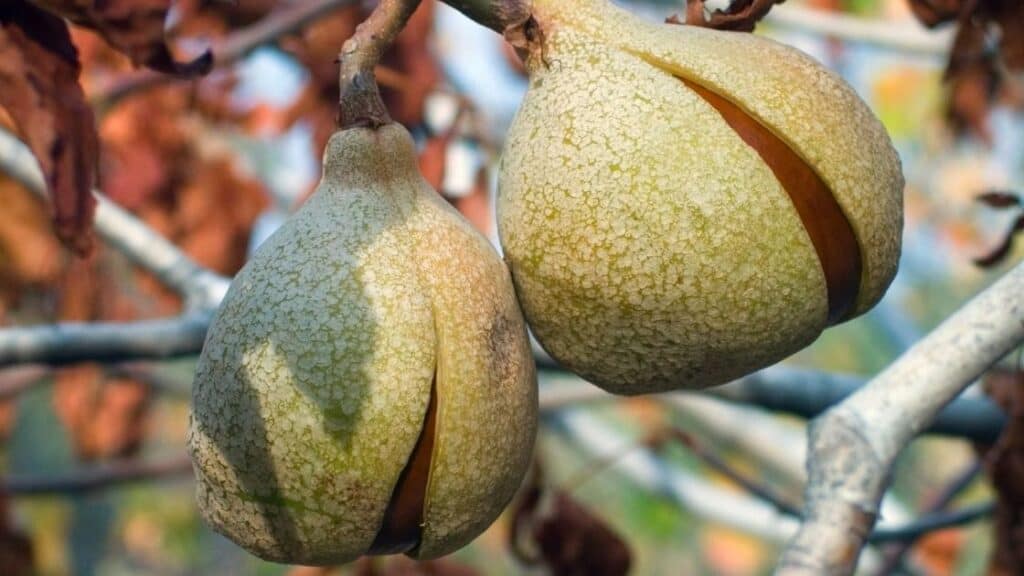 Although all the tree parts are poisonous, they can only harm you when ingested.

That’s why farmers remove them from their cattle grazing area, as they want to prevent animals from nibbling the trees, not touching them.

Native Americans wouldn’t allow their little ones to bring them everywhere if the nuts and leaves were poisonous to touch.

They believe the tree brings good luck, so they carry different parts of the tree as a charm.

Like a horseshoe, these shiny round nuts are known to attract good fortune.

Children collect them to make necklaces and trinkets.

Even now, school children keep them in their pockets for better luck.

Can You Eat Buckeye Nuts? 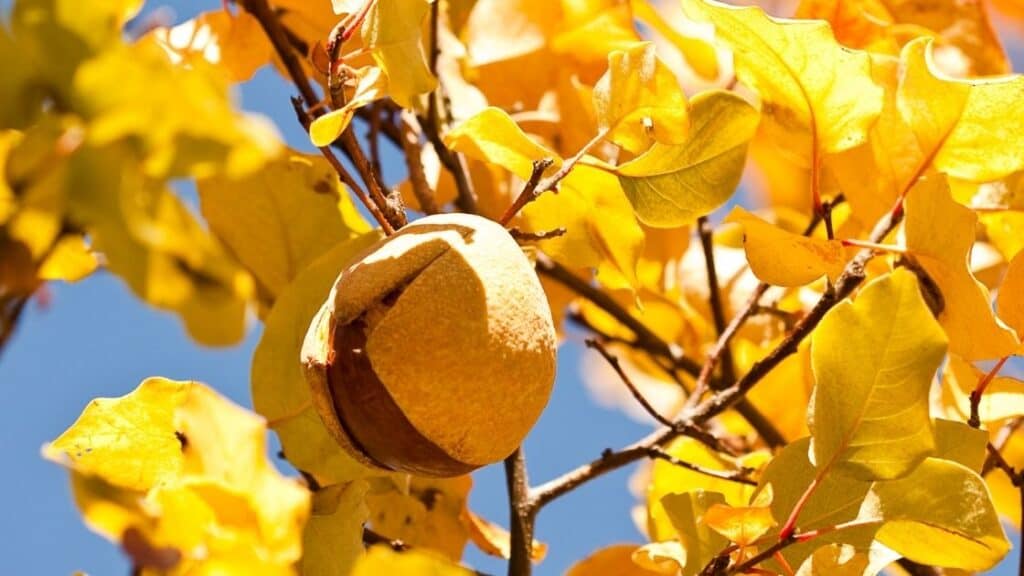 Native Americans knew a cooking method where they could extract the poison and make a dish called Hetuck, which was nutritious when prepared after mashing the roasted nuts.

However, even if you prepare the nuts by roasting and blanching, you would eat them as a last resort because you can never be sure if it’s completely free of the poisonous content.

Plus, the heating process is complex, so you shouldn’t try to roast them on an open fire.

Treat these nuts as inedible to avoid any ill effects.

If you search the internet for buckeye nuts benefits, you’ll come across recipes of buckeye fudge or buckeye candies.

However, these treats don’t contain buckeye nuts as their ingredient.

They’re just candies or fudge that look like buckeye nuts.

What Are Buckeyes Good For? 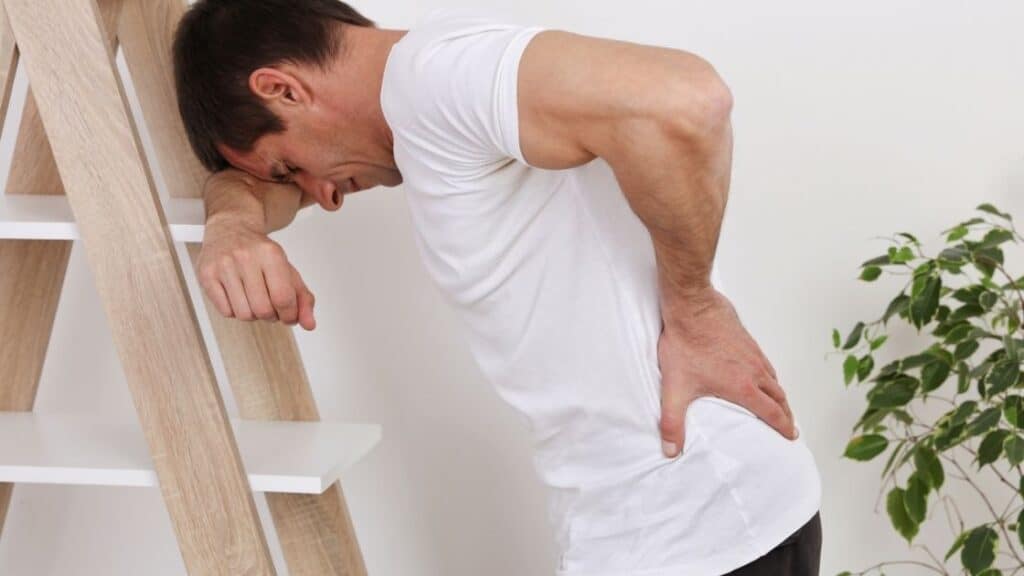 Native Americans consumed the buckeye nut for its medicinal benefits in treating arthritis and rheumatism, as they made great sedatives. But people used to heat up, roast, and leach it before consumption to make it safe to eat.

The nut’s medicinal benefits aren’t limited to internal uses, as you can use it externally as an ointment to treat rashes and ease the pain of hemorrhoids.

For this effect, Native Americans wrap a cloth around the nuts and crush them using a hammer.

They boil them in water, drain them, and repeat the process to remove the toxins.

Once that is finished, they make a paste by adding lard.

Some people use the paste to remove mildew stains from fabric, such as linen.

It was also a good material for bookbinding due to its strong insect-proof properties.

Early settlers also used buckeye nuts to make soap and even carve baby cradles out of the tree’s trunk.

They used it to make utensils, furniture, strips for hats and baskets, crates, and caskets.

Before advancements in technology, Native Americans made prosthetic limbs with buckeye nuts because they were lighter than other woods.

Today, the most important use of the buckeye tree is for landscaping, as its beautiful buds make it a good choice for land beautification, and its canopy-like structure can create a pleasant shadow over the roads and houses.

But many people have removed them from their yards because the leaves make a mess in the fall. 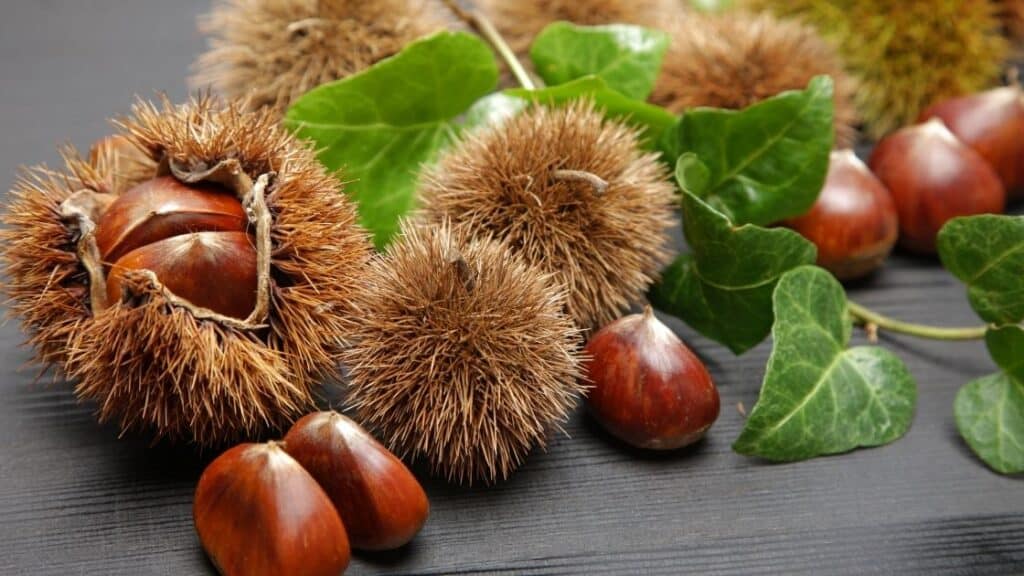 Buckeye nuts look a lot like chestnuts, but they don’t taste the same because of their high tannic acid levels.

While the buckeye tastes bitter, chestnut is sweet.

The biggest difference between buckeye nuts and chestnuts is that the former is inedible.

The chestnut tree produces sweet-tasting edible nuts wrapped in spiny burrs, with two or three seeds inside each burr, and the glossy, yellow-green leaves have edges lined with curving teeth.

However, buckeye nuts are only one or two shiny nuts covered by thick knobby husks.

The spiky shell is light green and is tightly closed until September and October when they fall from the tree.

Interestingly, they don’t belong to the same family.

However, you might confuse both trees with each other because of similar appearances. 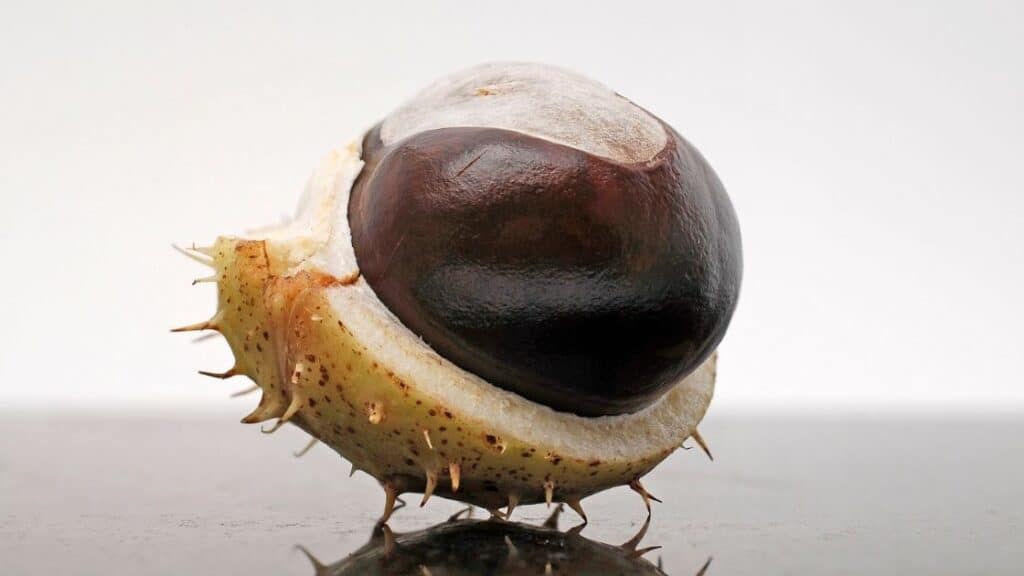 Both buckeye and horse chestnut are inedible, poisonous, and belong to the same family.

Plus, like all chestnut tree species, they’re deciduous, meaning they lose their leaves in the fall.

A buckeye’s bud is brown, dry, and pointed, while horse chestnut is bulky, sticky, and dark brown.

Like the sweet chestnut, horse chestnut has bright green and spiky pods.

Meanwhile, a buckeye’s pod is beige and pebbled.

Horse chestnuts are also popular ornamental trees due to their magnificent flower clusters and contain white flowers with yellow and red tints. 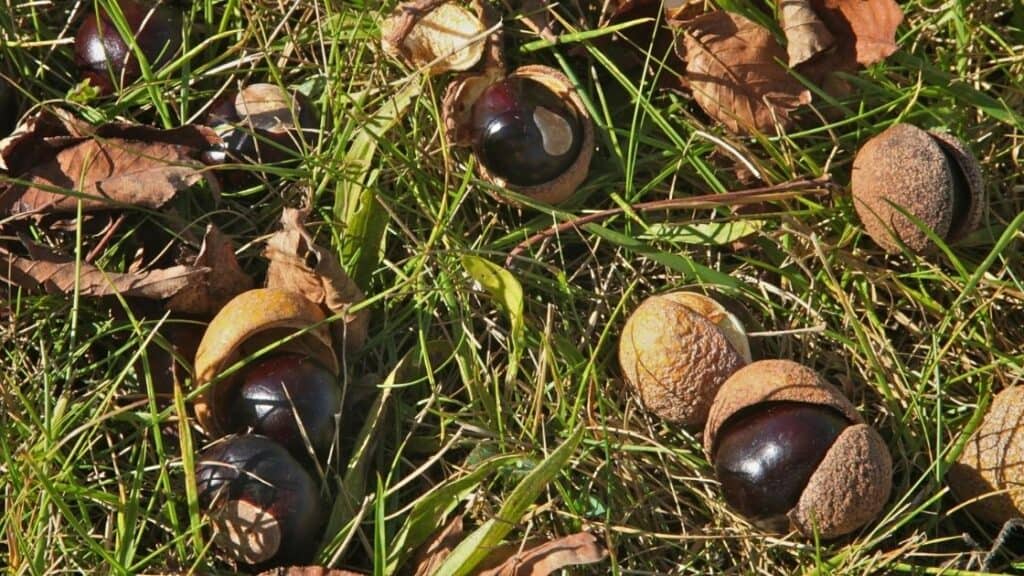 The name Buckeye comes from the white-topped brown nuts resembling a buck deer’s eye, and it is in this “eye” that the fruit grows.

Here, the seed pods’ membrane, which acts as the umbilical cord or the belly button, meets the nuts and helps them grow.

Among the different species of buckeye nuts, the Ohio variation is the most famous.

You can find these nuts everywhere in Ohio, as people use them in keychains or necklaces and hang them from windows or car mirrors.

Being abundant in Ohio, this buckeye tree has political ties with this state, too. In 1840, when William Henry Harrison was in a presidential campaign, he built his house in Ohio since he was a Virginia native.

His opponents took advantage of that, saying he would better live in a log cabin instead of the White House.

But his supporters took the opportunity to use it in their campaign slogan and introduced Harrison as “the log cabin candidate.”

The campaign symbol became a log cabin made with buckeye wood with buckeye nuts and was used as wall decorations.

When Harrison became president, his home state became famous as “the buckeye state.”

Also, a song about Ohio called the “Bonnie Buckeye State” spread among people.

The buckeye tree became the official Ohio state tree in 1953, with the Ohio residents known as “Buckeyes.”  Now, it’s the symbol of Ohio University.

As a staple of the Midwest, buckeye nuts are abundant in many states, especially Ohio.

The tree also has historical and political ties with the state and is the symbol of Ohio University.

The buckeye nut is mildly poisonous and inedible.

All parts of the tree, including sprouts, flowers, leaves, and bark, are poisonous to humans and animals.

If you eat the nut in large amounts–which you likely won’t due to its bitter taste–you’ll get typical poisoning symptoms, such as vomiting and intestinal discomfort.