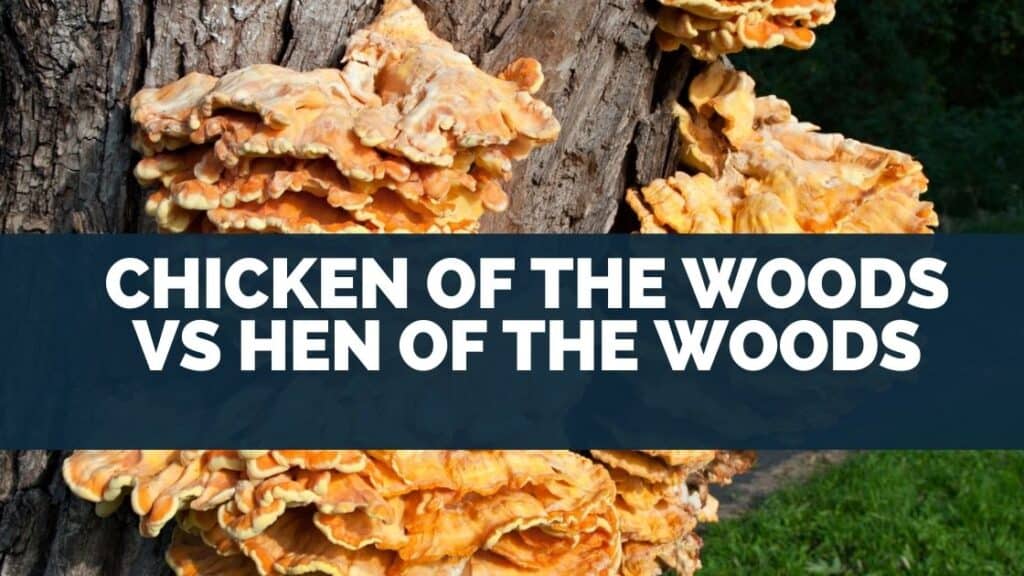 The flesh of chicken of the woods closely resembles chicken in smell, taste and texture.

This mushroom is edible unless it’s found growing on a poisonous tree such as yew.

Hens of the woods are edible and have a rich, firm, white flesh.

Chicken of the woods is a mushroom that closely resembles chicken meat when cooked.

Chicken of the woods is edible and often found growing on oak trees.

The color of this mushroom can vary from white to dark orange color.

The flesh of the mushroom has the same smell, texture, and taste as chicken.

Chicken of the woods is edible but it must be cooked before consuming.

Some people find that they run into issues when eating chicken of the woods and it has caused stomach pains and dizziness.

This mushroom does become inedible when it grows on a poisonous tree such as yew.

Chicken of the woods should be checked carefully to ensure that you don’t pick up an incredible mushroom.

This mushroom has soft and crumbly flesh.

Hen of the woods grows at the base of oak trees.

These mushrooms are edible and well known for their rich taste with a firm texture.

The base of the mushroom can be quite hard and is often discarded.

The frills of the mushroom can often hide dirt and bugs, so it’s best that these are pulled apart and washed well.

Hen of the woods can be roasted, dried, or fried.

They should be cooked well to avoid any digestive distress.

Hens of the woods grow in clusters and form a clump that looks similar to a hen, hence the name.

The flesh of this mushroom is white and firm.

It has a mushroom smell and taste which is enhanced as it matures. 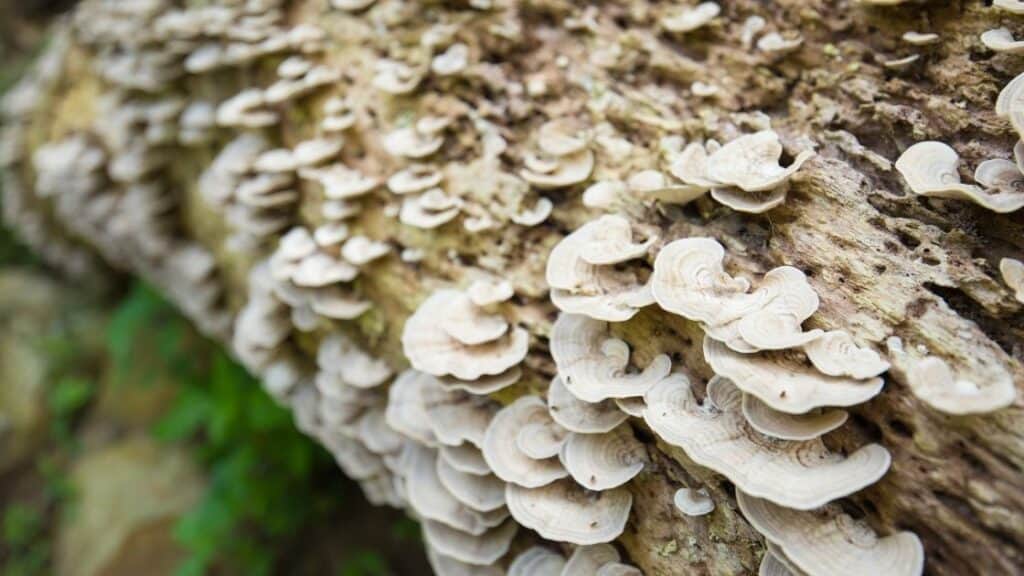 Despite having a chicken-like appearance and potentially being confused with chicken of the woods, hen of the woods has a strong, earthy, and sometimes peppery flavor.

It’s easy enough to confuse the two, but the taste and texture-wise they’re both different.

Hen of the woods is light brown and grows in feather-like clusters, which is where it gets its name from.

Similarly, chicken of the woods gets its name from the fact that it resembles chicken.

You can usually find hen of the woods at some grocery stores or a health store.

If you’re feeling brave, you can even forage them but you should be careful.

There are lookalikes of hen of the woods that you should avoid eating.

If you do plan to forage, you might want to consult an expert.

Chicken of the woods is also edible but those that grow on poisonous trees such as yew should not be consumed.

There are a few ways to prepare hen of the woods, and you should definitely cook them before consuming.

If you have young hen of the woods, they’re fairly small and can be roasted whole, making a great meat substitute.

The mature hen of the woods are larger and can be separated into bite-sized pieces.

They’re versatile so you can cook them in a variety of ways.

Some hens leave you with a tender core that you can use.

Get rid of the dirt and eat it just like you would the rest of the mushroom.

You can slice it and add to soup or cook it in large pieces.

Can chicken of the woods make you sick? 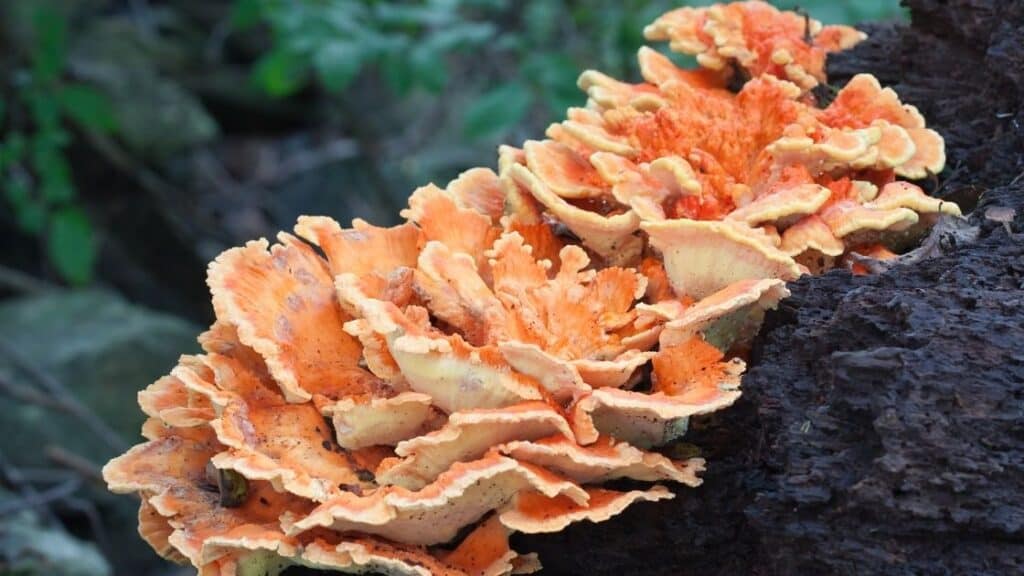 Chicken of the woods can make you sick if you’re sensitive to the mushroom, and you might suffer from a range of symptoms.

Symptoms include lip swelling and lightheadedness.

You might also suffer from an allergic reaction, and experience more severe symptoms.

If you don’t cook the mushroom well enough you might experience some digestive distress.

Many people find that they get sick after eating chicken from the woods.

This is caused by sensitivity, and the symptoms can range from being mild to more severe.

Symptoms include lip swelling or light-headedness.

The more severe symptoms are a sign that you may be allergic.

If the chicken of the woods is moldy, there’s a big likelihood you’ll find yourself getting sick.

The older the mushroom is the more likely you’ll get sick from it due to mold growth.

You should avoid chickens of the woods that grow on poisonous trees as this is inedible.

Avoid chicken of the woods that have grown on eucalyptus, hemlock, yew, and conifers.

You should ensure that you cook the mushrooms well as not doing so can make it difficult for your body to digest well.

Chitin which makes up the tough mushroom cell walls is hard for the body to digest.

The cooking process helps break down chitin as does chewing your food well.

If you want to avoid experiencing digestive distress from undercooked chicken of the words, you should ensure you cook the mushroom thoroughly.

Chewing properly also helps break down the chitin, so be mindful of this.

What happens if you eat undercooked chicken of the woods? 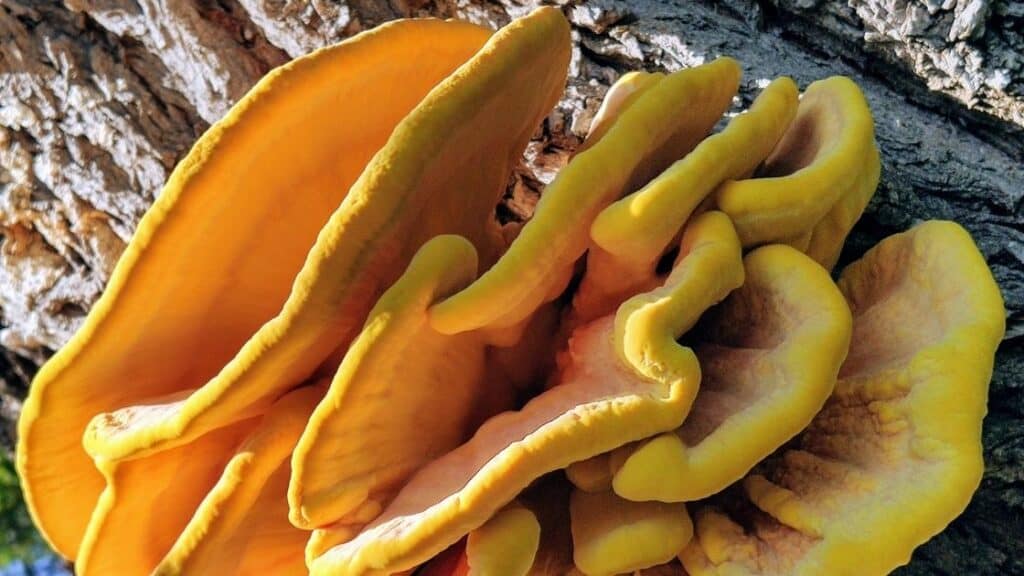 Undercooked chicken of the woods contains a lot of chitin, which is in the tough mushroom cell.

Chitin provides the mushroom with strength and durability but is difficult for the body to digest.

Cooking helps break down the chitin making it easier for the body to digest.

Chitin makes up the tough mushroom cell walls, it gives mushrooms its strength and durability.

The chitin allows the mushroom to push through rocks and plants but the body struggles to digest it well.

Thankfully, chitin breaks down during the cooking process making it much easier for you to digest.

Another process that breaks it down even further is chewing.

Many people eat quickly or don’t chew enough times, with mushrooms this can cause issues as the chitin may not be broken down enough.

By ensuring you cook your food well and chew thoroughly, you can avoid any digestive upset that can happen from your body struggling to break down the chitin.

Chicken of the woods isn’t poisonous when uncooked or even eaten raw, if it’s grown on a poisonous tree then the mushroom becomes inedible and should not be consumed.

Some people suggest not consuming undercooked mushrooms due to the presence of agaritine, a naturally-occurring toxin.

Mice studies once showed that arginine was carcinogenic but later studies appeared to disprove this.

Many still choose to cook their mushrooms to avoid consuming agaritine.

However, agaritine levels also reduce through being stored.

By the time you bring mushrooms home, they’ll have greatly reduced amounts of agaritine, so you don’t need to worry about this.

You are unlikely to get sick from eating undercooked chicken of the woods aside from some digestive distress, especially if you have prior digestive issues.

You might experience symptoms such as nausea, vomiting, and stomach pain.