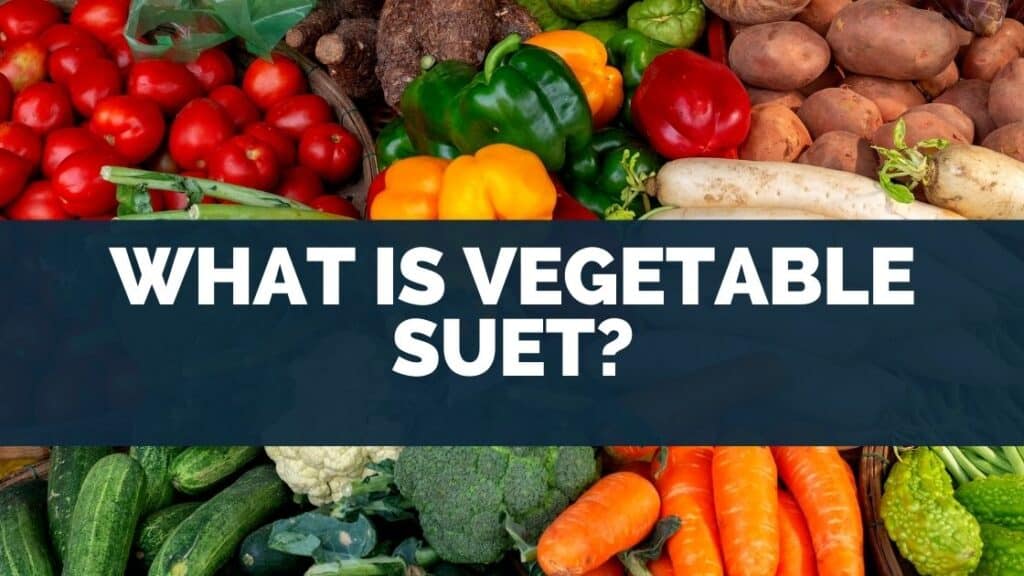 I’ve heard of suet, as well as vegetable shortening.

But, I wanted to know what vegetable suet is.

I did some research and here’s what I found.

Vegetable suet is a solid oil used in cooking.

It is made by infusing hydrogen gas into vegetable oil to make it solid at room temperature.

It takes its name from suet which is made from animal fat.

But, vegetable suet is vegetarian.

So, below I’ll explain whether they’re the same thing, alternatives to vegetable suet, and how it compares to lard.

Go to top
Table Of Contents hide
1 Is Vegetable Suet the Same as Shortening?
1.1 Why vegetable suet/vegetable shortening is used rather than cooking oil
1.2 Cooking oil and containers that keep them are widely available
1.3 Suet has different properties from oil – better suited for some recipes
1.4 Modern vegetable suet is available from various retailers
2 Suet vs Lard
2.1 Both suet and lard and made using an identical process
3 What Can I Use Instead of Vegetable Suet?
4 Can I Use Lard Instead of Suet?

Is Vegetable Suet the Same as Shortening? 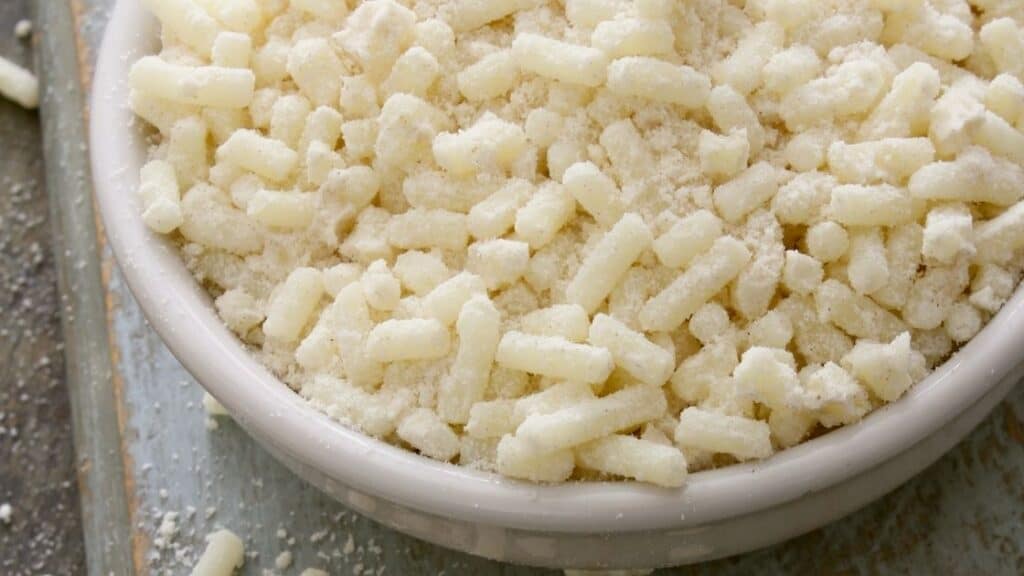 Vegetable suet and vegetable shortening are both white and are used the same way in baking.

So, I was curious whether they’re the same thing and if there are any differences between them.

Vegetable suet and vegetable shortening are the same thing.

Shortening can also be made from animal fat and is different from vegetable shortening/vegetable suet because it’s made with animal products.

Whereas, the latter is made from vegetable oil.

Where seeds are mixed with vegetable suet or vegetable shortening to create a solid object that birds peck into.

It’s also commonly used in puddings and savory puddings due to its unique properties.

Why vegetable suet/vegetable shortening is used rather than cooking oil

Suet was traditionally used because it is very hard like a bar of soap at room temperature.

For that reason, it was easy for people to transport and keep.

When it was needed to be used some could be shaved off using a knife or a grater, where it could be used as a cooking oil.

It’s very commonly found as the main ingredient in recipes found from the 1800’s.

And is still used today.

It’s especially used in traditional puddings especially in countries in the UK such as England and the UK.

The tradition has likely traveled with immigrants as they traveled to other parts of the world such as the USA, Canada, Australia, and New Zealand in the 1800’s where recipe books and memorized recipes were taken with them (source).

Since some people prefer a vegetarian or vegan diet to a meat-based diet, this created demand for suet made from vegetable sources.

Which, in my opinion, is where vegetable shortening, also called vegetable suet, came from.

As suet always means animal fat, that is rendered down.

And is generally bought from the local butcher who has some on hand, or will make a special batch for you if you ask.

Cooking oil and containers that keep them are widely available

Suet was essentially the traditional vegetable oil or butter.

Rather than cutting off a piece of fat from a piece of meat, and using it to grease a pan.

Suet was used primarily for this purpose.

Olive oil is a common oil that is very popular as a salad dressing, to dip bread into, and as a cooking oil.

Olive oil is completely liquid at room temperature but goes solid in the refrigerator.

Many people wonder about whether olive oil differs from vegetable oil.

I explained the major differences, how long they keep, and the best ways to store them in this article about the difference between olive oil and vegetable oil.

Suet has different properties from oil – better suited for some recipes

For that reason, suet is better for certain recipes such as pastry dough, and pudding.

Where once they’re made and get to room temperature they hold their shape much better, than if oil is used.

With pudding, it holds its shape, and then when it’s heating it melts and runs out.

Then it leaves small holes that give the pudding a lighter texture.

There are a few brands that make vegetable shortening which is very similar and almost identical to vegetable suet.

They will typically sell one made from animal products and one that is made from vegetable products. 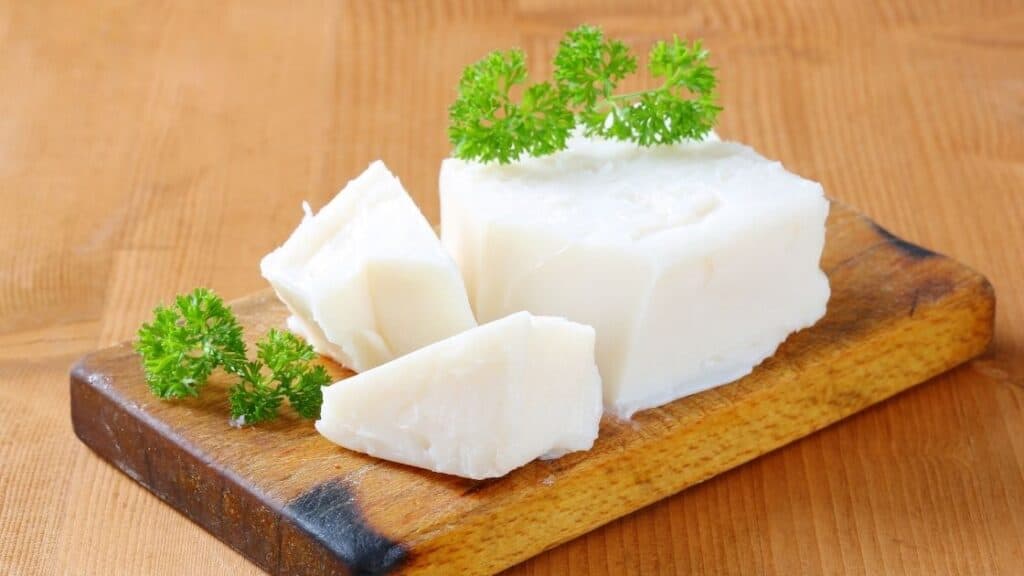 Suet and lard are very similar as they are both white, hard, and have a greasy oily texture when warmed and heated.

But, are they the same thing, and what are the differences between suet and lard?

For that reason, they have a different flavor, and slightly different texture and melting point.

The fat used to make suet and lard is sourced from around the kidneys and loin, rather than from any other part of the animal.

This fat has a much different texture to fat found in other parts of the animal.

The fat used to make lard is commonly called leaf fat and is found in the back of the rib cage of a pig after you remove all of the organs.

Whereas, suet is made from fat that is sourced only from the loin or kidney region of beef, and mutton.

As you may know, mutton is meat from a male or female sheep that is at least one year old.

It’s completely different in texture and taste to animal fat from other parts of the animal.

Here’s a great video that shows how suet is made:

Both suet and lard and made using an identical process

Suet and lard are made in exactly the same way.

The fat is cut into small pieces about 1 to 2 inches in width. It’s then heated on low heat.

The goal is to heat it without cooking it.

This process can take 2 to 3 hours.

And it needs to be stirred every now and then.

The animal fat contains fibers, veins, and sometimes organs from the animal.

That should be removed as you cut it into cubes.

Even being extra vigilant, much of the fibers remain.

As the fat is rendered the fibers will separate from the oil.

The percentage of the entire fat that remains as fibers in the colander of cloth is about 25%.

Therefore, for a batch of oil, you’ll get roughly 75% suet or lard.

It’s then poured into jars, or molds and left to cool where it turns into pristine suet or lard that is almost pure white.

What Can I Use Instead of Vegetable Suet? 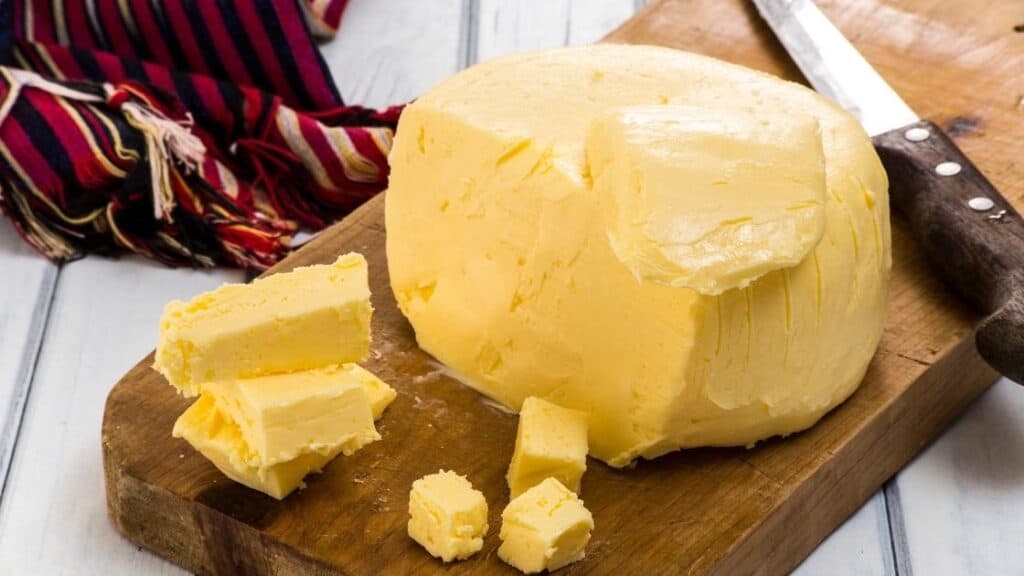 Vegetable suet is quite hard to source in certain regions.

And so I was curious if there are ingredients that are more common that can be used instead of vegetable suet.

As a general rule, vegetable shortening or butter can be used instead of vegetable suet.

Vegetable suet and vegetable shortening are exactly the same thing but are labeled differently due to differences in language that have developed over time.

People have reported replacing suet with butter in many recipes and have claimed that it produces a final product that is still very delicious.

For example, people say they’ve used butter instead of suet in puddings and have found it to be equally as good.

Vegetable suet or vegetable shortening is better than butter and cooking oils for frying foods because it’s less prone to splattering.

The main confusion appears to have come about due to the invention of margarine.

Which is butter made from vegetable oil.

It’s made by hydrogenating vegetable oil which makes it solid at room temperature and is the same process for how vegetable shortening is made.

Because margarine – also called vegetable oil spreads, vegetable suet, and vegetable shortening all have virtually identical properties but are generally used for different purposes, different words are used to name them.

And they’re labeled differently when sold in stores.

Can I Use Lard Instead of Suet? 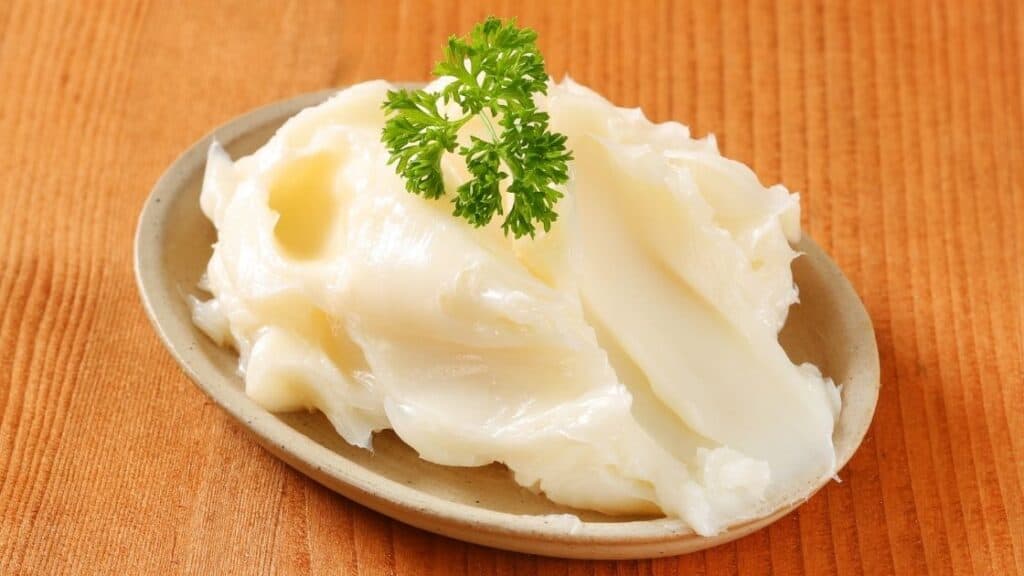 Lard is sometimes more widely available than suet, and therefore you may be wondering if you can use lard in a recipe that calls for suet.

I looked into it and here’s what I found.

Lard makes a very good substitute for suet and is virtually identical in it’s properties.

The main difference is the flavor which is due to the difference in the source of the fat.

Lard is primarily made from pork fat, whereas suet is made from mutton or beef fat.

Pork, mutton, and beef all have different flavors that are easily identifiable.

although suet and lard don’t have a strong flavor they do have perceptible differences in flavor.

Suet and lard also have slightly different melting points which vary by a maximum of 10 degrees celsius or Fahrenheit.