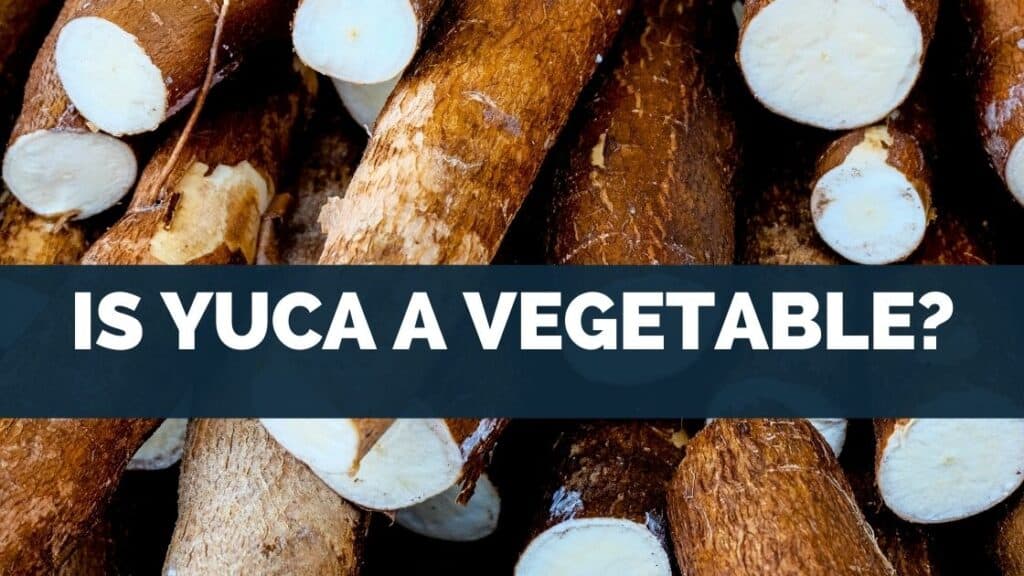 I’ve been thinking about growing some yucca to eat. But, I was curious whether yucca is a fruit or a vegetable.

I looked into the botanical classification and here’s what I found.

Yucca is a vegetable, according to the botanical classification.

Yucca is technically called cassava, but is referred to commonly as yucca or manioc, and less commonly mandioca.

There is also another ornamental plant called yucca which has an edible flower, which is also a vegetable.

Fruits and vegetables are often misnamed as such.

For example, some fruits are called vegetables, when they are in fact fruits.

Below, I will describe why yucca is a vegetable, as well as the nutritional qualities of yucca, whether it’s good if you’re on a diet, how it compares to potatoes, and whether it’s a complex carb.

Go to top
Table Of Contents show
1 Is Yucca Better for You Than Potatoes?
1.1 Why yucca is a vegetable from a botanical perspective?
1.2 Difference between yucca and yucca – there are 2 plants with same name
2 Does Yucca Have a Lot of Calories?
3 Is Yucca Healthy for a Diet?
4 Is Yucca a Complex Carb?
5 Can You Eat Yucca Raw?

Is Yucca Better for You Than Potatoes? 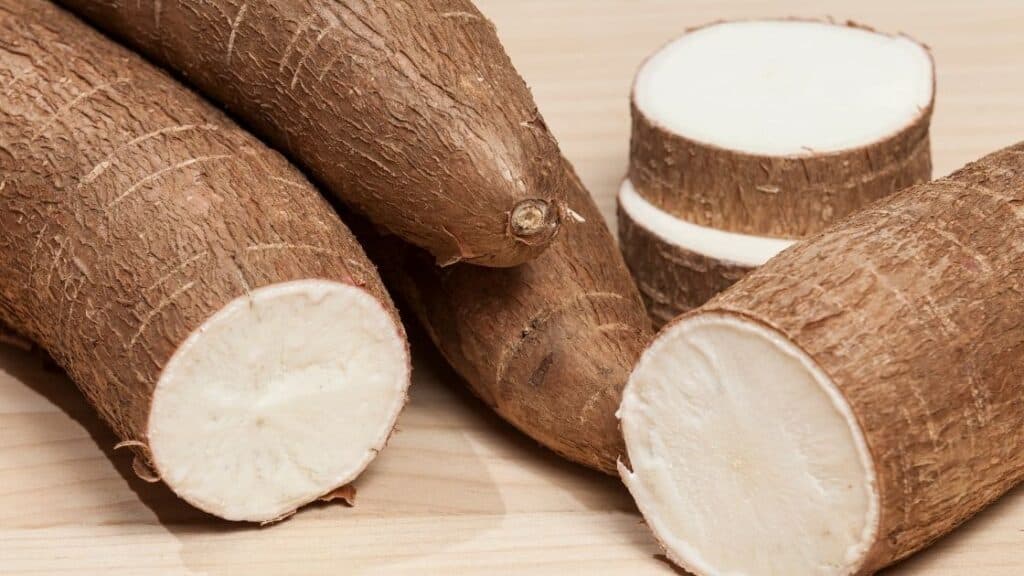 Yucca is very similar in texture to potatoes.

But, I wanted to know which is healthier, potatoes or yucca so I looked into the number of beneficial nutrients in each, and here’s what I found.

Overall, potatoes are better for you than yucca.

However, the difference is small for some nutrients and higher for others.

But, yucca has significantly more calories than potatoes which can be better for putting on muscle, and worse for trying to lose weight.

There are what are called vitamins and minerals.

I’ve converted the amounts in grams and mcg (μ) into the percentage of the recommended daily intake.

And all numbers are per half a cup of yucca or potatoes which is 100g or 3.4 oz.

* All numbers are percent recommended daily intake. And are for 100g (half a cup).

As you can see from the data in the table, yucca is higher in some nutrients.

Whereas, potatoes are higher in some nutrients.

When you look at the nutrients of both overall, potatoes are slightly higher across the board.

But, there are definitely exceptions. For example, yucca has 12.67% of your recommended daily intake of Vitamin E.

And potatoes have 8.14% of your recommended daily intake of phosphorus.

Depending on what nutrients you need more or less of can determine whether yucca or potatoes are healthier for you.

If nothing else this data shows that it’s good to have a varied diet of various different foods so that you get a wide range of vitamins and nutrients.

Why yucca is a vegetable from a botanical perspective?

A fruit houses the seeds of a plant.

Whereas, a vegetable is the leaves, stems, and roots of a plant.

Yucca which is scientifically called cassava according to Encyclopedia Britannica is the root of the manioc plant.

By comparison fruits such as apples, tomatoes, and pumpkin house the seeds that are covered in a flesh.

Here’s a video that shows how cassava (yucca) is grown and harvested.

As a side note the person who made the video has a farm in Florida that has a tropical climate.

And yucca only generally grows in a tropical climate.

The first one is the root vegetable which has the botanical name cassava.

The other is an ornamental plant that has an edible flower that is similar to asparagus.

The has an extremely large bud.

That is harvested before it starts to open and the stem becomes too hard to eat.

Cassava has broad leaves and grows in a tree-like fashion.

Whereas, yucca – the non-cassava plant – has long thin spiky leaves, and grows more similar to a shrub.

Here’s a video showing how a yucca flower is harvested (not the cassava yucca the other kind):

Does Yucca Have a Lot of Calories? 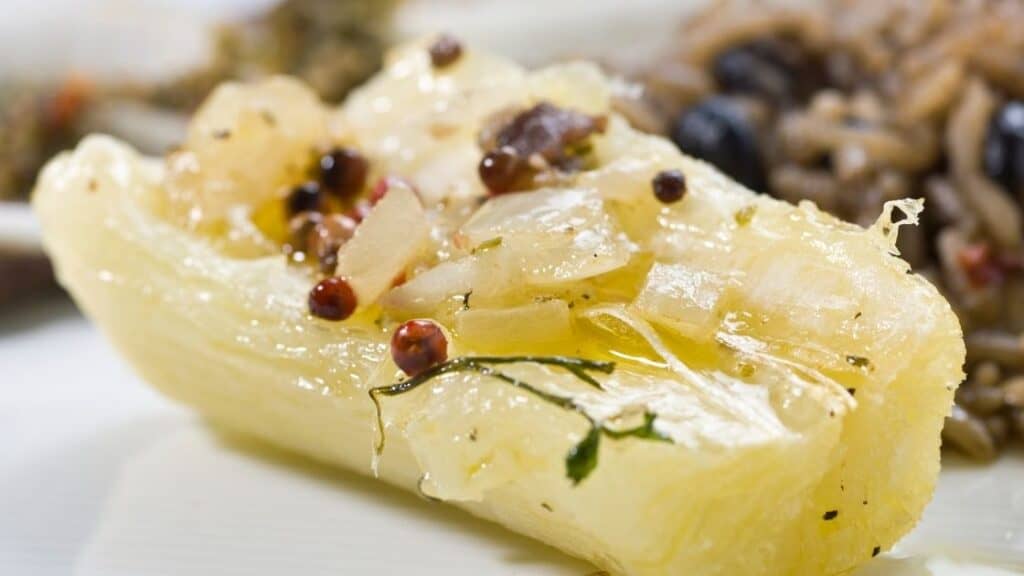 Yucca is a very starchy vegetable that is quite heavy and filling.

But, you may be wondering whether it contains a lot of calories. Here’s what I found.

Yucca contains a lot of calories.

It contains about half the calories of potato which is a similar vegetable.

However, a typical serving of yucca contains about 10% of your recommended daily calorie intake.

Cassava or yucca is generally boiled, or cooked in the oven like a potato.

It’s a cylinder shape and is generally cut in half lengthwise. And is served in portions similar to sweet potato or potato.

Is Yucca Healthy for a Diet? 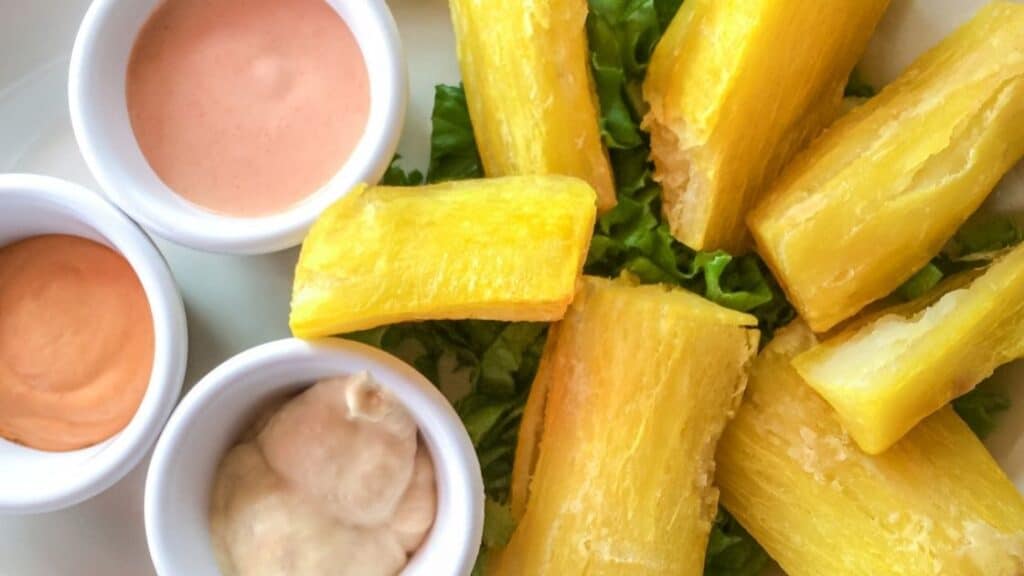 Yucca is quite delicious but has a tendency to fill you up quite fast.

But, is it good if you’re trying to lose weight, and watching your calories?

Overall, yucca is healthy for a diet. But, it is quite calorie dense.

It contains roughly double the calories of other root vegetables such as potatoes.

Other than that, it contains beneficial nutrients that are good for your overall health such as vitamins and minerals.

Yucca is a good source of calories because it is very calorie dense.

When putting together a meal plan that takes into account a calorie budget, you may decide that potatoes are a better option.

Because it will mean you can consume foods that you otherwise might not be able to eat.

For example, if you get a lot of calories from yucca it can mean you can’t eat other foods like ice cream or chocolate that have a high amount of calories.

Whereas, if you eat potatoes instead, it will mean you have more room in your calorie budget for the day where you can also eat foods which you wouldn’t normally be able to eat otherwise.

Across the board, both yucca and potatoes are quite similar in the nutrients they contain.

So, eating one over the other only impacts the total amount of calories you consume rather than your overall nutrients.

Is Yucca a Complex Carb? 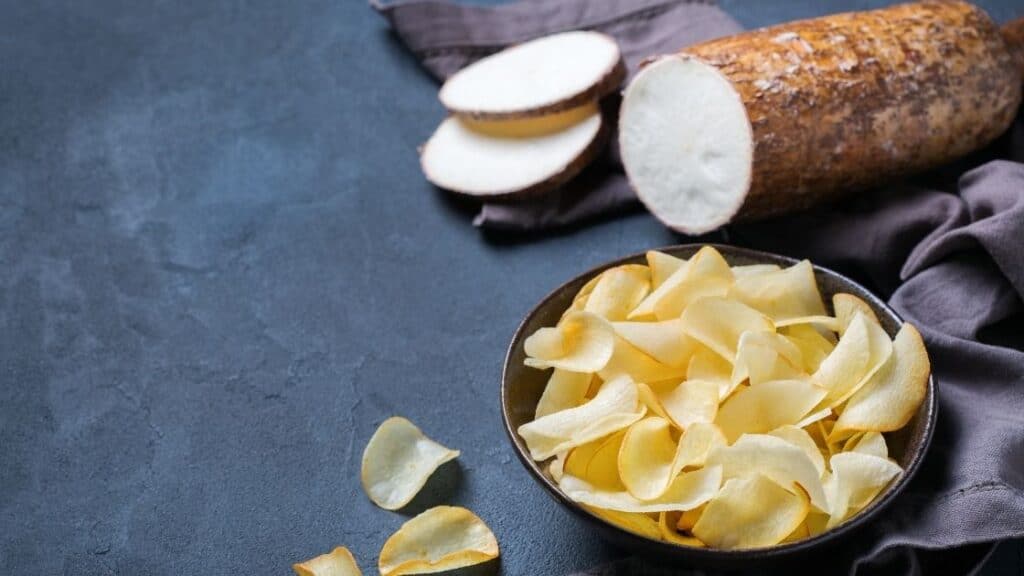 Complex carbs are better for keeping an even blood sugar, and can also be more nutrient-dense than other foods. But, is yucca a complex carb?

Yucca is a complex carb according to medical professionals.

However, yucca is quite high in calories compared to potatoes and has roughly twice as many calories.

Yucca also contains twice the sugar that potatoes have.

Provided a varied diet is followed yucca is still perfectly healthy to eat.

Complex carbs are generally considered to release energy more slowly and can keep you fuller for longer.

And yucca is no exception. Complex carbs are also generally thought to be good for weight loss because of this fact.

But, it’s important to note that yucca is very calorific

Can You Eat Yucca Raw? 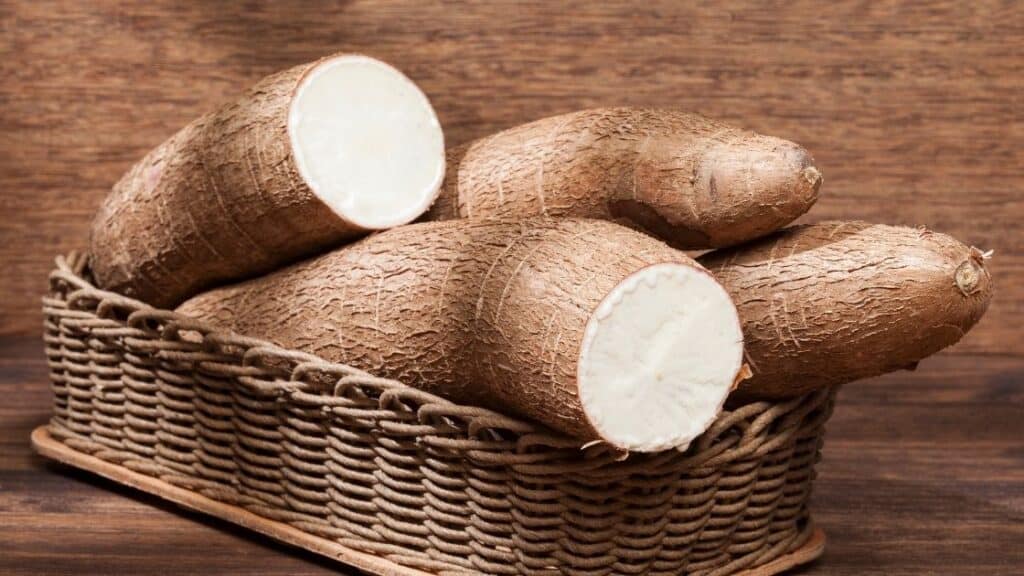 Yucca is delicious when cooked, and can be cooked in a variety of ways.

Yucca should not be consumed raw.

Yucca contains cyanogenic glycosides that can cause cyanide, a known toxin to enter the bloodstream.

Therefore yucca needs to be peeled to remove the skin and cooked.

When sold in stores it’s also commonly coated in wax to preserve it.

Interestingly, store-bought cassava can last a few weeks because of the waxy coating.

But, freshly harvested yucca needs to be consumed within a day or two.

Therefore, peeling the yucca not only removes the toxins that can be found in the plant but also removes the waxy coating for store-bought yucca.

Consuming raw cassava infrequently or not preparing exactly right can be OK in the short term.

But, over the long term, it can be detrimental to your health according to medical professionals.