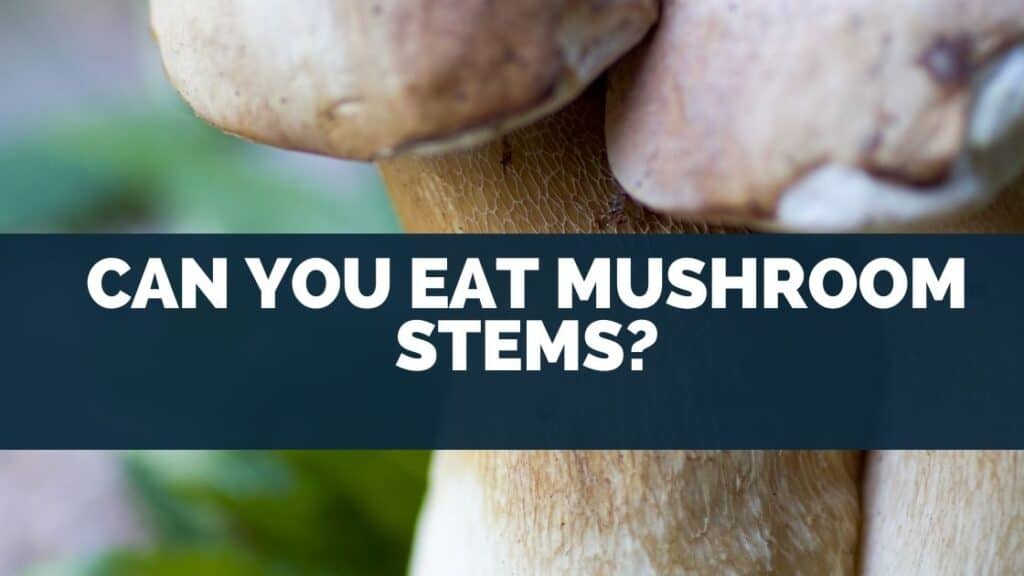 When cooking with plants and fungi (like mushrooms), it’s common to discard various scraps that don’t seem as appetizing— things like onion peels, carrot tops, or mushroom stems.

However, it’s not necessary to discard many of these things and you can actually make good use of them, rather than throw them into your garbage disposal.

You can eat mushroom stems! In fact, in many cases, they are just as tasty as the mushroom caps.

With some varieties of mushrooms, the stems may be too hard or woody to eat and you may choose not to eat them, but it’s not a matter of the mushroom stems being poisonous or inedible.

With edible mushrooms, you can safely eat both the stems and the caps, if you so choose. 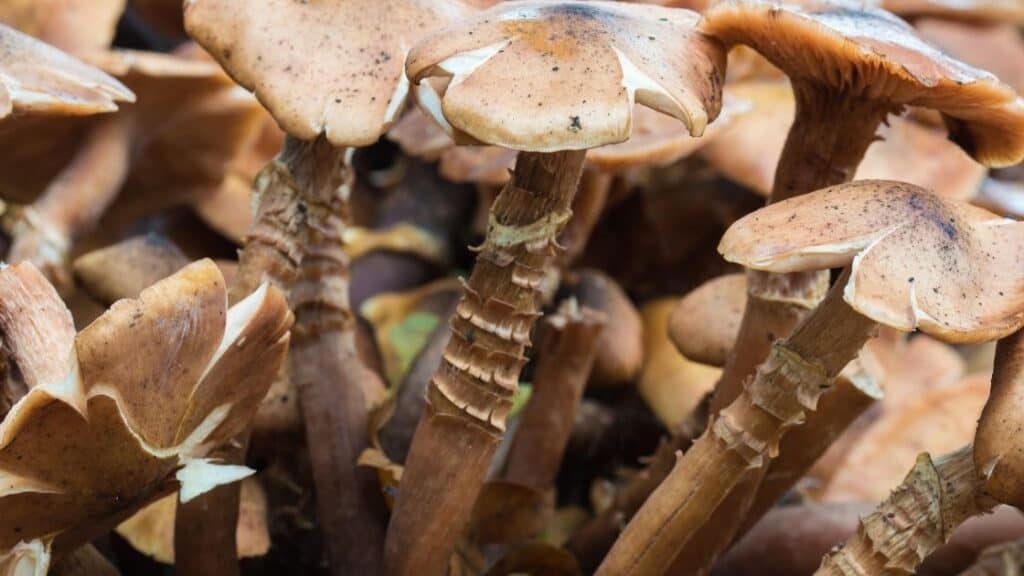 People may be reluctant to eat mushroom stems for a couple of reasons.

First, they may think that the stems are too hard or rough to make an appealing dish.

Second, some people may think the stems are poisonous or unhealthy to eat.

However, stems of edible mushrooms are perfectly fine to eat, and in many cases, you can find tasty ways to incorporate them into your dishes.

In the first situation, people may choose not to eat the stems because they prefer the taste or texture of the caps and dislike eating the stems.

However, there are several varieties of mushrooms whose stems are more appealing to eat than others.

These include portobello, crimini, chanterelle, porcini, and white button mushrooms.

In this case, you can chop up the stems more finely and add them to your dish.

Other mushrooms, like shiitake, have more woody stems and are usually cut closer to the cap to avoid eating too much stem.

If you dislike using the stems but would prefer not to waste them, you could consider throwing them into a soup, stew, or broth.

Many people take their uneaten vegetable and mushroom scraps and freeze them until they have collected enough to make broth with them.

Mushrooms — even mushroom stems — add a rich, umami flavor to vegetable or meat broths and are well-worth saving.

This recipe for velvety mushroom soup actually calls for mushroom stems as one of the primary ingredients.

In the second situation, some people may believe that eating mushroom stems are poisonous or will cause digestive issues.

There is no reason to believe, however, that you will have trouble digesting mushroom stems if you can tolerate the whole mushroom with no problems.

Mushrooms that are cultivated for human consumption will be edible, stems and all. 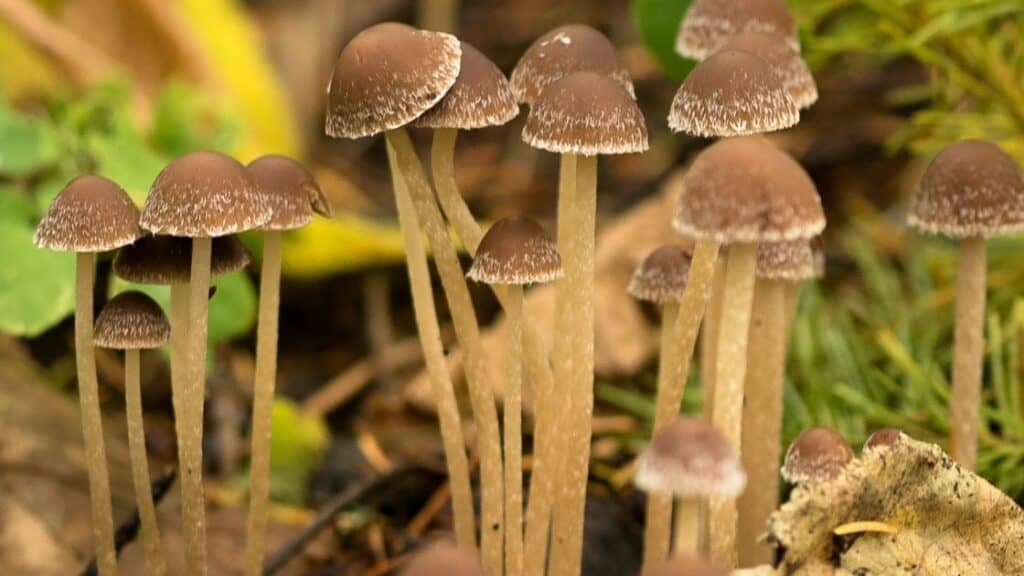 Mushroom stems are a valuable source of nutrients, just as whole mushrooms are.

Nutritionally speaking, stems may differ slightly from caps, as stems may have more water content and less protein content than caps.

However, the differences are not significant.

You don’t need to especially seek out mushroom stems for health reasons — just eat the whole mushroom when you cook them.

Mushrooms are nutritious whole food that provides a burst of nutrients with very few calories.

In fact, ½ cup of mushrooms weighed raw, is only 11 calories!

The reason for this is that mushrooms contain a lot of water.

For only containing 11 calories, the same ½ cup of mushrooms provides significant amounts of vitamins and minerals. See the table below:

You can see that mushrooms provide relatively large amounts of nutrients like copper and several B vitamins, along with smaller amounts of nearly every other micronutrient.

When you eat ½ cup of mushrooms, you get all of this nutrition for a mere 11 calories!

This makes mushrooms a great choice for you if you are trying to lose weight, and it’s also what makes most whole foods ideal for both health and optimal body composition — they provide more nutrition for fewer calories than most highly processed foods.

The numbers above are likely applicable to whole mushrooms — likely the caps and a bit of the stem, like you would buy them in a grocery store.

However, is there a difference in nutrition between the stems and the caps?

The difference is likely not significant.

According to this scientific paper, the stem (or stalk) of the mushroom contains more water than the caps, which may slightly influence the nutrition content.

In addition, the protein content of the caps may be slightly higher than the stems, and there is probably more fiber in the stems than in the caps.

However, these differences are probably not significant enough to warrant favoring stems over caps, or caps over stems.

Your best strategy that takes into account nutrition, tastiness, and sustainability is just to eat the whole mushroom whenever possible.

Can you freeze mushroom stems? 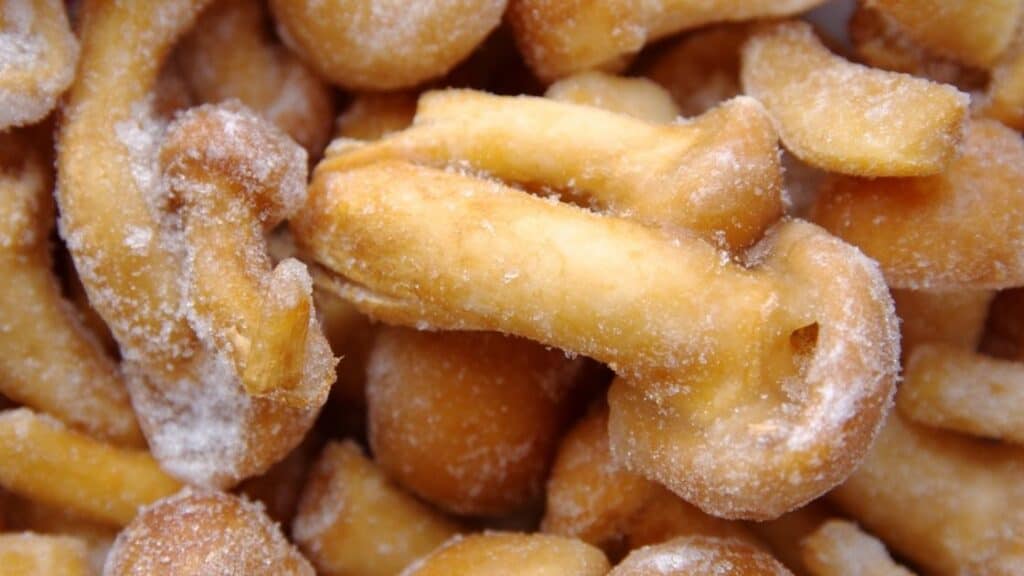 Yes, you can certainly freeze mushroom stems to be eaten later.

Keep in mind that once you’re ready to eat them, it’s best to cook them from frozen, rather than defrosting first (this avoids soggy mushrooms).

Freezing mushrooms — including stems, if you have scraps leftover — is an optimal way to avoid waste and preserve the nutrients found in the mushrooms.

For best results, freeze the mushrooms when they are at their freshest.

If you have mushrooms that have already begun to rot, you may decide to cook them up, then freeze them to be added to soup or stock later on.

There are several ways to freeze — raw, sautéed, or blanched.

If you choose to freeze raw, whole mushrooms or mushroom stems, the first scrub or brush them to remove dirt.

It’s best not to wash them with water, as this tends to make the mushrooms soggy.

You can either cut up the mushrooms or leave them whole.

Then transfer them to a pan and place them in the freezer.

Once they’re frozen solid, put them in a freezer bag and store them in your freezer until you’re ready to use.

Another option is to sauté the mushrooms first, then freeze.

First, brush them to remove the dirt.

Then add them to a hot pan with some oil or butter and sauté for a few minutes.

Allow the mushrooms to cool, then spread them out on a pan and freeze until solid.

Once frozen, store them in a freezer bag in the freezer.

Finally, you may choose to blanch your mushrooms before freezing.

Once again, you’ll want to brush or scrub them to remove dirt, then either slice them or leave them whole.

Then you will steam the mushrooms for a few minutes, using the method of your choice (see this article for more details).

Once steamed, immediately submerge the mushrooms into a bowl of ice water and leave them in for a few minutes.

Afterward, you’ll drain and dry the mushrooms, then freeze them on a tray until solid.

Once solid, you’ll transfer them to a freezer bag for storage.

All of these methods will allow you to preserve as much nutrition in the mushrooms as possible and avoid waste.

If you’re interested in more details on freezing mushrooms, check out this video.