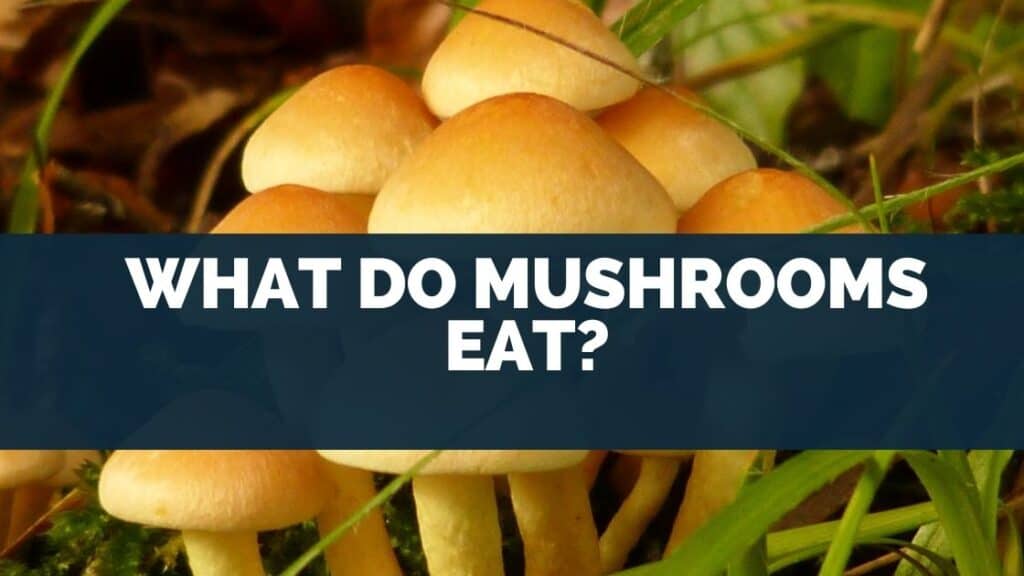 Mushrooms have an element of mystery about them, especially from the viewpoint of us humans.

Most of the time, the extensive underground fungal networks that produce mushrooms are hidden from our view.

We only really become aware of them when they happen to produce a large mushroom and we happen across it in our yards, or maybe in the woods.

The topic of how fungi procure their food is one of the things that makes mushrooms fascinating.

Depending on the species, fungi that produce mushrooms may obtain their food from any number of places: dead and decomposing organic matter, living plants, or even other living organisms like insects or other fungi.

They “eat” by secreting enzymes via their fungal networks, turning the potential food into a soupy, easily digested substance, then absorbing it through its exterior cell walls.

Do mushrooms make their own food? 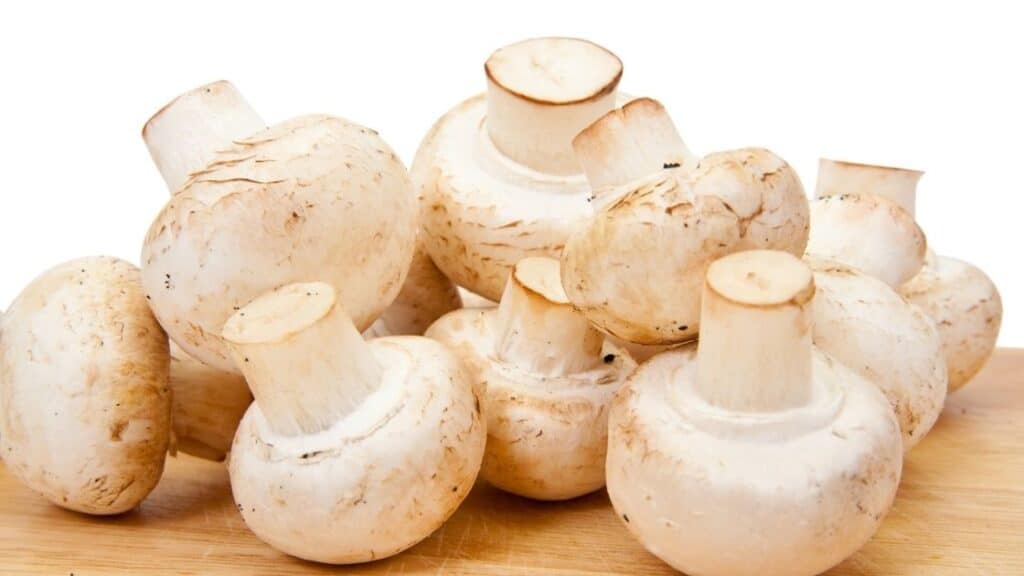 Mushrooms do not make their own food, like plants do.

Unlike plants, mushrooms do not contain chlorophyll and are incapable of performing photosynthesis to generate their food out of energy from the sun.

Fungi, which produce mushrooms, feed on other organisms — usually plants, but sometimes other fungi or animals.

They often feed on organic matter that is already dead and decaying, which helps to enrich the surrounding soil by turning decomposing organic matter into fertilizer.

Mushrooms are the fruiting bodies of a fungal organism that lives underground.

In general, the fungus sends out numerous tendrils, called hyphae, into the soil where it lives, in order to maximize the amount of surface area that interfaces with its environment.

All of the surrounding soil and its contents is potential food for the fungus.

The fungus uses its hyphae to secrete enzymes — specialized proteins that act as biological catalysts and facilitate chemical reactions — into the environment where the fungus has taken up residence.

The fungus may live in a patch of soil large or small, or it may be intertwined with tree roots underground, or it may even be growing on another living organism as a parasite.

When the hyphae release its enzymes, they begin to break down the substrate (potential food) into a more digestible, soupy substance, which then allows the fungus to absorb this substance through its outer walls.

This is analogous to how humans digest food — we also break down our food into smaller components with digestive enzymes, but we ingest the food first and break the food down within our digestive system.

By the way, this whole process tends to help surrounding plants and insects thrive.

The process of mushrooms breaking down matter that can be absorbed as food creates rich soil — also called humus. Plants can’t grow and thrive without humus.

Fungi help to create rich soil by means of their unabsorbed nutrient-dense substrate, as well as their waste products (similar to worms in compost piles).

In this way, fungi and the mushrooms they produce are a vital part of the circle of life. 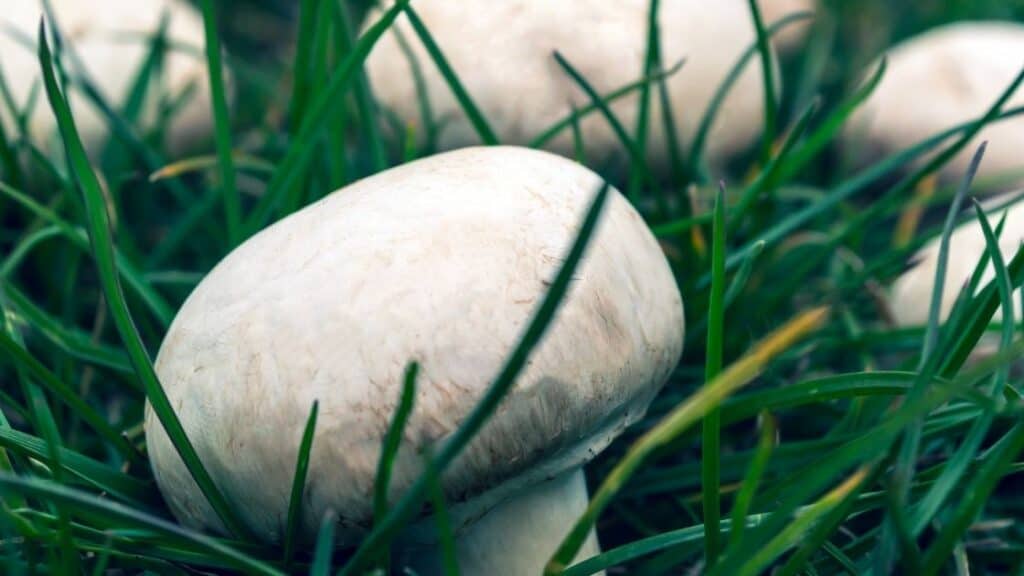 Fungi (which produce mushrooms) do eat grass, but they typically eat grass clippings left over after you mow it.

If you see mushrooms springing up in your yard, you don’t need to worry that the fungus will kill your grass.

On the contrary, having mushrooms growing in your yard is probably a sign of good soil health.

Many types of fungi love to feed on decomposing plant matter, like the grass clippings and fallen, rotting leaves that characterize your lawn.

They may also feed on the bodies of dead insects as well.

You may not appreciate the aesthetics of your lawn when it is teeming with mushrooms, but you should know that it likely means that the soil under your grass is healthy and nutrient-rich. 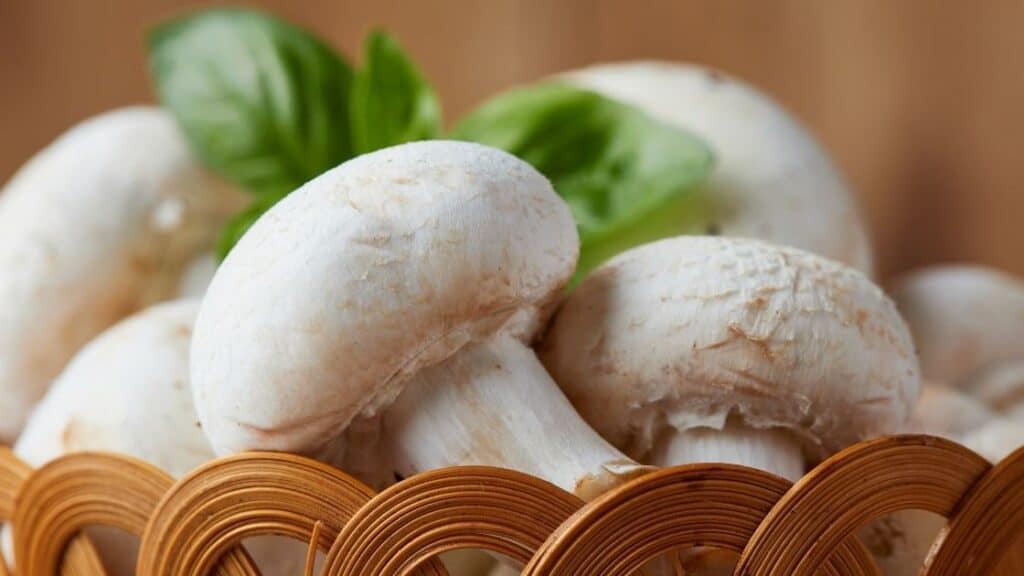 Many fungi (which produce mushrooms) feed on plants that are already dead and decaying.

However, there are some types of fungi that obtain nutrients from still-living plants — sometimes as part of a symbiotic, mutually beneficial relationship, but sometimes as a parasite, in which the host plant is harmed.

Among the fungi that produce mushrooms, there are a few different major varieties that obtain their food in distinct ways.

First, there are saprophytic fungi.

These are the types of fungi that get their nutrition from already dead and decaying matter — whether that be dead leaves, rotting wood, dead animal corpses, or something else.

Most cultivated mushrooms that are bred for human consumption fall into this category (i.e., portobello, shiitake, button).

Next, there are mycorrhizal fungi.

These may also consume dead and decaying matter, but they also are known to enter into symbiotic relationships with living plants in which both the fungus and the plant benefit from the exchange. According to brittanica.com,

“Mycorrhiza is a non-disease-producing association in which the fungus invades the root to absorb nutrients.

Mycorrhizal fungi establish a mild form of parasitism that is mutualistic, meaning both the plant and the fungus benefit from the association.

About 90 percent of land plants rely on mycorhizal fungi, especially for mineral nutrients (i.e., phosphorus), and in return the fungus receives nutrients formed by the plant.”

Next, there are parasitic fungi.

These fungi attack a living host and feed on its cytoplasm.

This obviously robs the host of its resources and neutralizes its natural defenses, causing harm to it.

With a parasitic relationship, the aim of the parasite is not to kill its host, but to weaken it so that it can continue to take advantage of it.

“In contrast with the saprotrophic fungi, parasitic fungi attack living organisms, penetrate their outer defenses, invade them, and obtain nourishment from living cytoplasm, thereby causing disease and sometimes death of the host.”

Finally, some fungi can be classified as carnivorous. We will discuss this variety next. 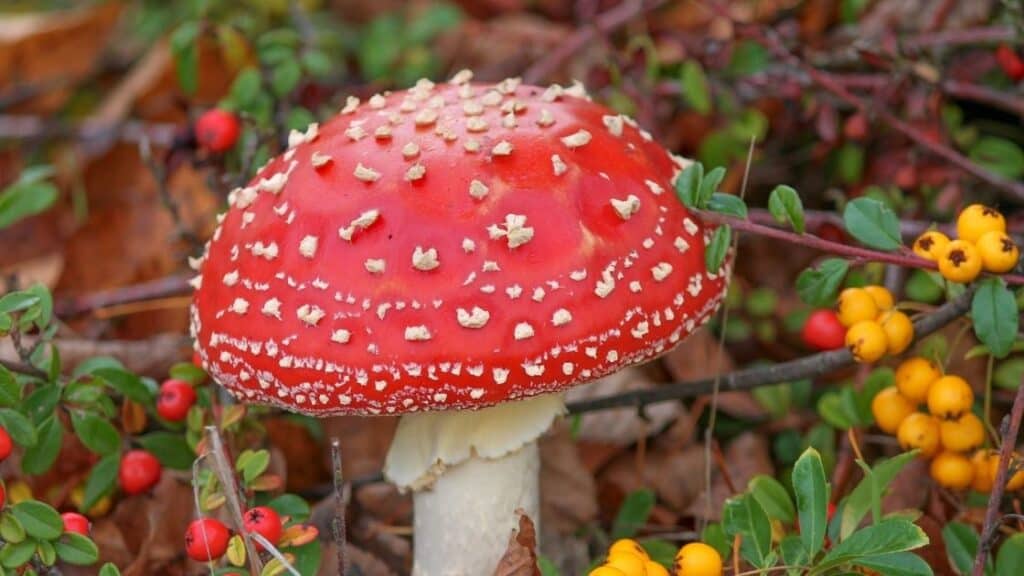 Carnivorous mushrooms consume living animals — usually insects, such as nematodes or amoebas. Oyster mushrooms are an example of a type of fungus that can be carnivorous.

A “carnivore” is defined as an animal that feeds on another animal’s flesh.

Carnivorous organisms are different — they prey upon the other animal for the purpose of killing them and eating their flesh. Nature is brutal!

This fascinating article details how one variety of fungi — the type that produces oyster mushrooms — was discovered to prey upon nematodes.

Nematodes (also called roundworms) are “little animals complete with guts, nerves, muscles and their own primitive form of hopes and dreams.” Oyster mushrooms make contact with nematodes, inject them with a poison that paralyzes them, then secrete enzymes that turn their bodies into an easily-digested slurry.

Oyster mushrooms are not the only carnivorous fungus.

There are many more that prey upon small, primitive insects like nematodes and amoebas.

Furthermore, many types of fungi will obtain their food through a combination of methods.

For example, oyster mushrooms feed on nematodes but are also saprophytic (they feed upon the dead and decaying organic matter).