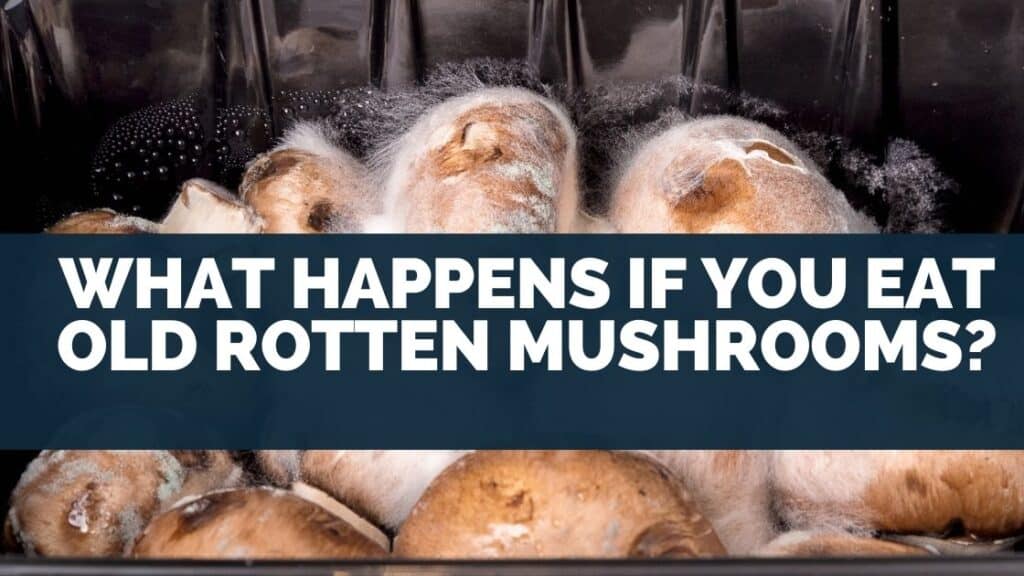 If you eat old, rotten mushrooms you may experience gastrointestinal issues such as stomach pain, cramping, and vomiting.

You should avoid eating mushrooms that are slimy, discolored, or shrivelled up.

You might experience side effects such as vomiting, nausea, stomach pain, and cramping.

When mushrooms get old, microbes colonize and take over the mushroom.

There are a few ways to work out whether a mushroom has gone off, firstly you want to check the whole mushroom and check if the surface has begun wrinkling or shriveling up.

When a mushroom shrivels up, this is one of the first signs that it’s going off or already has.

You should try and eat mushrooms before they reach this stage.

If there are any dark brown or black spots on the mushroom, this is a sign it has gone off.

If a mushroom has any signs of discoloring, you should discard as soon as possible.

Slimy or mushy mushrooms should definitely not be eaten, mushrooms that are firm can be eaten, when they lose this firmness, discard the mushrooms.

If the mushrooms smell sour or strange, you should definitely toss them.

Good mushrooms tend to have a fresh or earthly smell, when they don’t smell quite right, this is a sign that the mushroom has gone off.

Whole, fresh mushrooms can be kept in the fridge for around 7-10 days.

Once cut, they can be kept in the fridge for 5-7 days.

If you buy mushrooms that have been stored for around a week, when you bring them home, they may spoil much quicker than this. 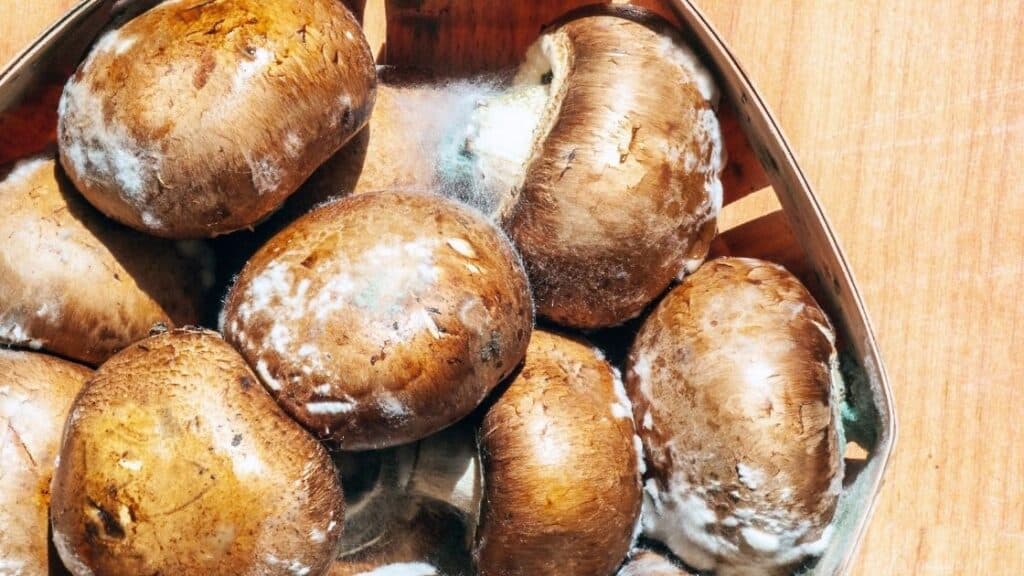 Table Of Contents show
1 Can moldy mushrooms make you sick?
2 Is it OK to eat mushrooms that have turned brown?
3 Why do mushrooms turn brown?

Can moldy mushrooms make you sick?

Moldy mushrooms can cause digestive distress and gastrointestinal illness, you may experience symptoms such nausea, diarrhea, or vomiting.

Avoid eating mushrooms that show signs of being old such as being slimy, discolored, mushy or an off smell.

Moldy mushrooms can make you sick, you might experience digestive distress and have symptoms such as vomiting, diarrhea or nausea.

You might experience symptoms that feel like you’ve been poisoned but this is not the case, as long as you haven’t consumed poisonous mushrooms, you’re safe from being poisoned.

Mushrooms that have gone off and grown mold can make you ill when you consume them.

This is why it’s best to avoid them and only eat mushrooms that haven’t gone off.

You can usually tell if a mushroom has gone off if it’s slimy, mushy, shrivelled or has an off smell.

Mushrooms can generally be stored in the fridge for around 7-10 days, when cut they can be stored for around 5-7 days.

If the mushrooms have been in the fridge for longer than these periods, you should inspect them carefully before consuming them.

Remember, mushrooms can exhibit these signs much earlier than this.

Especially if they have been in the store for around a week before you purchased them.

When buying mushrooms, try and pick the freshest ones as this means you can keep them for longer.

Mushrooms shouldn’t be stored at room temperature, as the warmth causes them to deteriorate even faster.

Even if you freeze mushrooms, you should still keep a close eye on them when you go to use them in your cooking, as mold may have been able to grow in this time.

Only store mushrooms when they’re completely dry, and wash them right before using them.

Playing wet mushrooms in the fridge can cause them to go off quicker.

Is it OK to eat mushrooms that have turned brown? 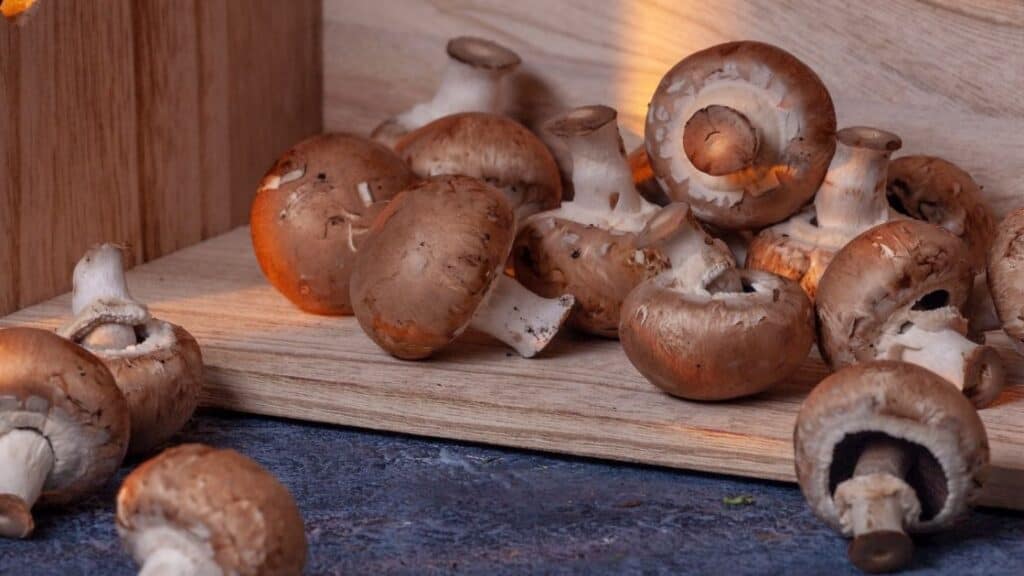 No, you should avoid eating mushrooms that have turned brown as this is a sign that they have gone off.

You may experience illness and have symptoms such as nausea, diarrhea, and stomach pain.

Other signs of a mushroom being off and not safe to eat are when the mushroom is slimy, mushy, shriveled, or has a bad smell.

When mushrooms have turned brown, this is a sign that they have gone off.

Discoloration or dark brown or black spots on mushrooms is one of the tell-tale signs that it’s no longer safe for consumption.

If you have mushrooms that have turned brown, you should discard them.

Even when a mushroom is naturally darker in color, it’s quite obvious to see when it has gone off.

If the mushroom has darker spots or areas, it most likely means it has gone off.

You might experience symptoms such as nausea, diarrhea, and stomach pain.

Store mushrooms well to retain their freshness and prevent them from becoming rotten.

Avoid storing them at room temperature, as the mushrooms can deteriorate much quicker.

Prior to eating, inspect them to ensure there are no signs of the mushrooms being rotten.

Other signs include being slimy, mushy, shriveling up, and having a bad smell.

Why do mushrooms turn brown? 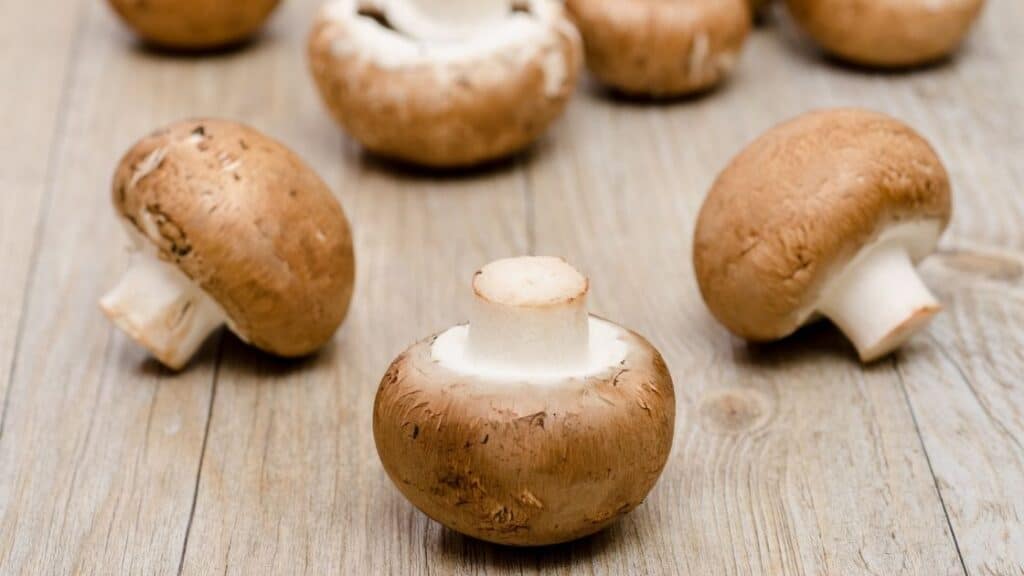 Mushrooms turn brown because of a chemical reaction, they can turn brown if they sustain physical damage and bruise.

They can also turn brown as they age or if the mushroom has begun to rot.

Mushrooms turn brown due to enzymatic oxidation of phenolic substrates, causing browning to form on the mushroom.

This oxidation can occur when the mushroom is physically damaged causing it to bruise, it can also brown as it matures.

If the mushroom experiences a microbial attack, it will also brown.

A discolored mushroom or one with dark brown or black spots is often considered to be a sign that a mushroom has gone off, you should ensure that you inspect a mushroom carefully to see if there are other signs it has gone off.

If you know that you’ve dropped the mushrooms, then turning brown is not a reason to discard them.

If you’ve had them for a while, the mushrooms may have turned due to aging but you should check carefully to figure out if it’s safe or not to eat as mushrooms cannot be stored for too long before they begin rotting.

Mushrooms are fairly vulnerable to turning brown compared to some other vegetables, this is because they don’t have a waxy layer that protects other vegetables from sustaining physical damage or a microbial attack.

To prevent mushrooms from turning brown, store them well.

Store them in the fridge and keep them dry, moisture will cause the mushrooms to deteriorate much quicker.

You should also ensure you handle them carefully to prevent unnecessary physical damage.

Keeping mushrooms whole will also prevent them from turning brown too quickly.