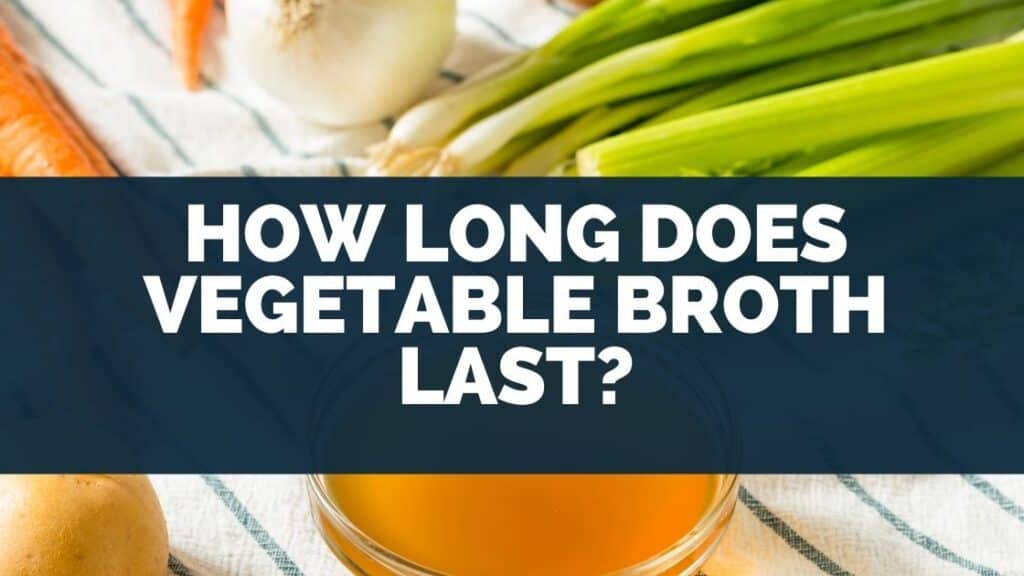 Vegetable broth is a staple ingredient in many traditional cuisines around the world and has numerous health benefits.

Vegetable broth is made from simmering whole vegetables or vegetable scraps in water.

Store-bought broth can be stored for several months if unopened, or if stored frozen.

What are the health benefits of vegetable broth? 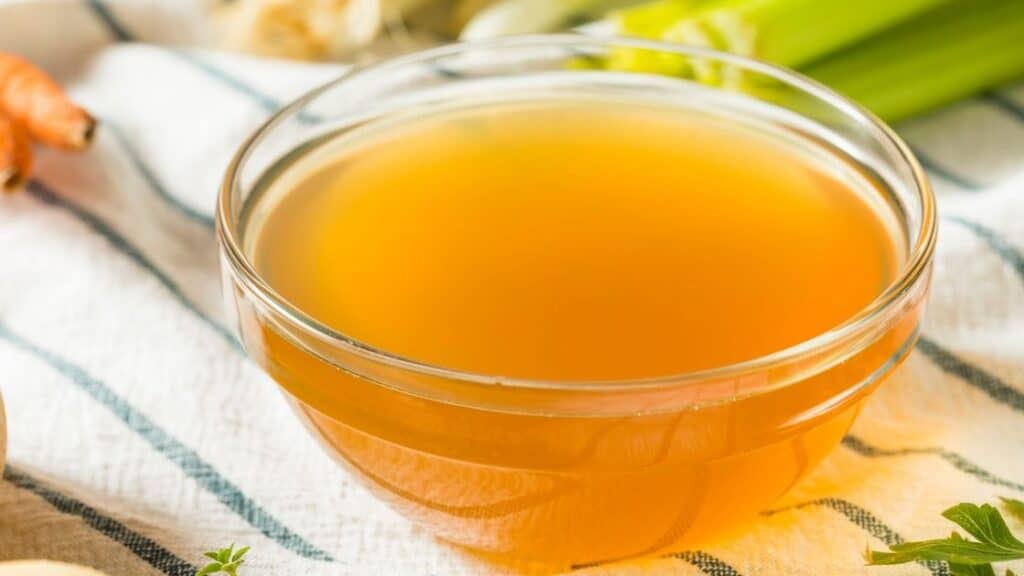 Simmering vegetables, or even just vegetable scraps, results in a significant percentage of the vitamin and mineral content of the vegetables being leached into the cooking liquid.

Even if the vegetable scraps used to make the soup aren’t directly eaten, the liquid will be rich in nutrients, particularly minerals, after a long period of boiling.

Vegetable broth is made by simmering vegetables and herbs in water.

This cooking method results in a large portion of the micronutrient content of the vegetables being leached into the cooking liquid.

This is especially true of the mineral content of the vegetables — sodium, potassium, phosphorus, magnesium, zinc, etc.

Vegetable broth is therefore rich in nutrients, especially minerals, even when the vegetables used in the cooking process are discarded.

Speaking of discarded vegetables, using vegetable scraps is a great way to reduce wastefulness when cooking your own broth.

Over time, collect the tough ends of vegetables you use in your cooking — carrot tops, ends and skins of onions, ends of celery stalks, or fresh herbs that have started to wither — and dump all of those into your broth when you make it.

This video gives you a great primer on making easy, low-waste vegetable broth from scraps.

What are the best vegetables to use to make broth? 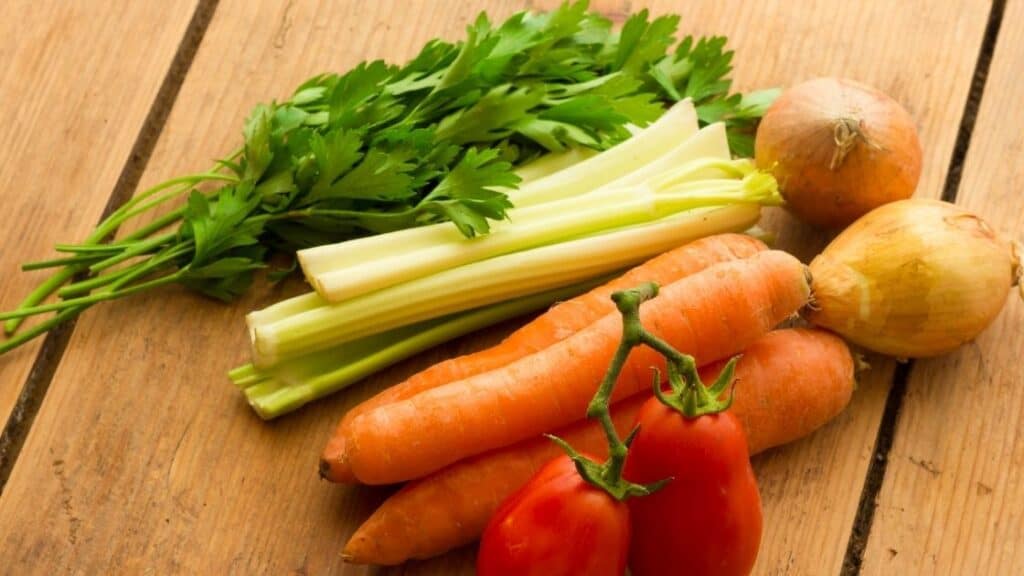 Vegetable broths are usually made from primarily carrots, onions, and celery, but you can use virtually any type of vegetable or herb that doesn’t have an overpowering flavor.

Carrots, onions, and celery make a great base for any vegetable broth.

With herbs, you will likely want to use less so that your broth doesn’t end up with an overpoweringly strong taste.

Experiment with different combinations and see what you come up with!

Think outside the box when it comes to additives to your broth.

Parsley and thyme are what we usually think of when adding herbs, but you can add medicinal herbs — think ginseng, astragalus, and ginger — as well for a nutritional and flavorful bonus.

One type of vegetable that is often overlooked by Western cultures is sea vegetables!

Adding sea vegetables like kelp, wakame, and kombu not only deepens the flavor of your soup but adds a variety of minerals that are not present in high amounts in other types of vegetables.

For example, kelp is extremely rich in iodine, which is difficult to get in your diet unless you consume a large amount of iodized salt.

Cruciferous veggies, like broccoli and cauliflower, may not work so well in your broth, especially if you plan to simmer the veggies for a long period of time.

Zucchini and green beans also tend to become overly bitter after being cooked for a long time, so you may want to avoid these as well.

Using starchy vegetables like potatoes and sweet potatoes may result in a cloudy broth.

Finally, vegetables like beets, which have a strong color and flavor, will definitely overpower your broth.

How can you improve the nutrient quality of vegetable broth? 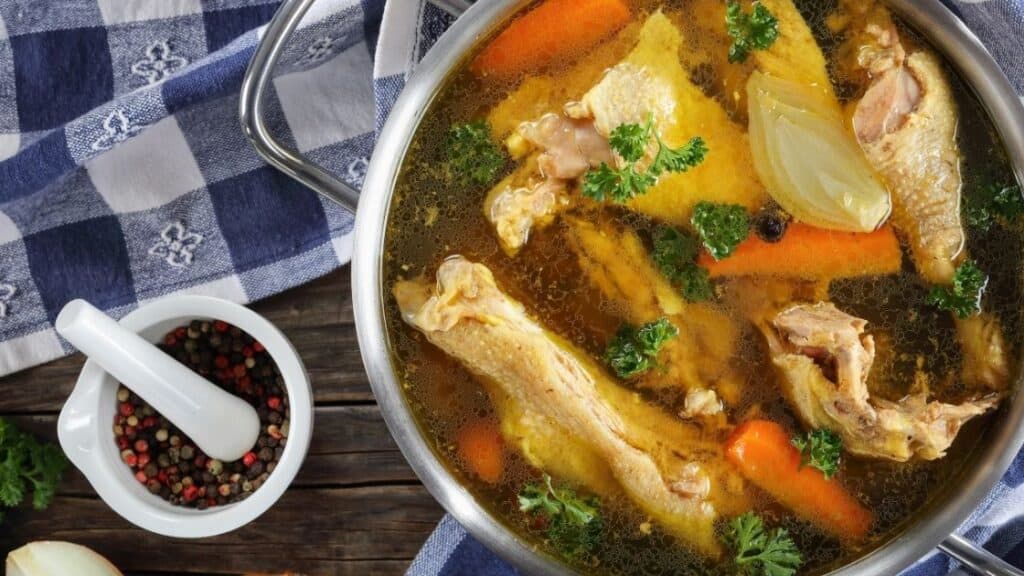 Adding bones, animal feet, heads, or necks, or tougher cuts of meat that are rich in connective tissue to your vegetable broth will boost the nutrient content even more.

This effectively turns your vegetable broth into bone broth, which will add significant amounts of collagen, glycine, glycosaminoglycans, proline, and glutamine.

You certainly don’t need to add anything other than vegetables (or veggie scraps) and water to your broth, but adding some strategic parts of an animal (chicken, pork, beef, or fish) will add a significant nutritional boost to your broth.

Adding bones, necks, feet, or tough cuts rich in connective tissue will add compounds such as collagen and gelatin, which are great for your own body’s connective tissue, skin, hair, and nails.

Collagen is rich in amino acids such as glycine, glutamine, and proline, which have several key roles in the body but are not as rich in the cuts of muscle meat that are usually eaten.

Finally, adding bones or animal parts to your soup adds glycosaminoglycans, which are also crucial in maintaining connective tissue health.

Finally, adding gelatin-rich animal parts to your broth will give your broth a thicker texture and a richer, deeper taste.

Using only vegetables in your broth will also be tasty, but the texture will be much thinner.

How long does vegetable broth last? 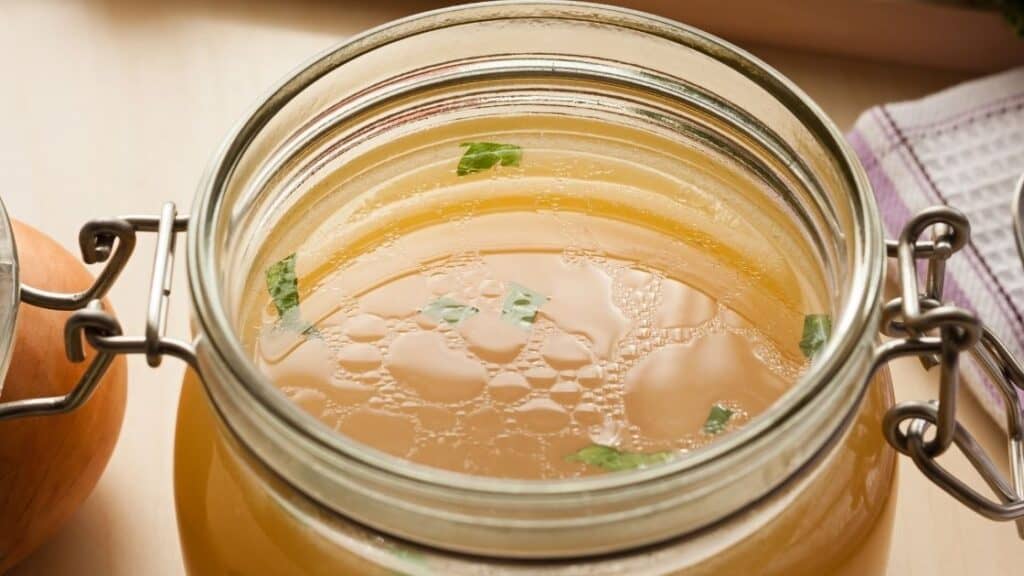 In the case of store-bought vegetable broth, it lasts for several months as long as it’s unopened.

Once it’s opened, you can safely consume the broth for about 3-4 days before it spoils, as long as you’re storing it in the refrigerator.

In the case of homemade vegetable broth, you have about 3-4 days to use it before it goes bad.

The 3-4 day rule is a helpful rule of thumb, but you don’t need to be dogmatic about it.

If your broth smells and tastes fine on day 4 or 5 after opening it, you can likely eat it without fear of it making you sick.

Can you freeze vegetable broth? 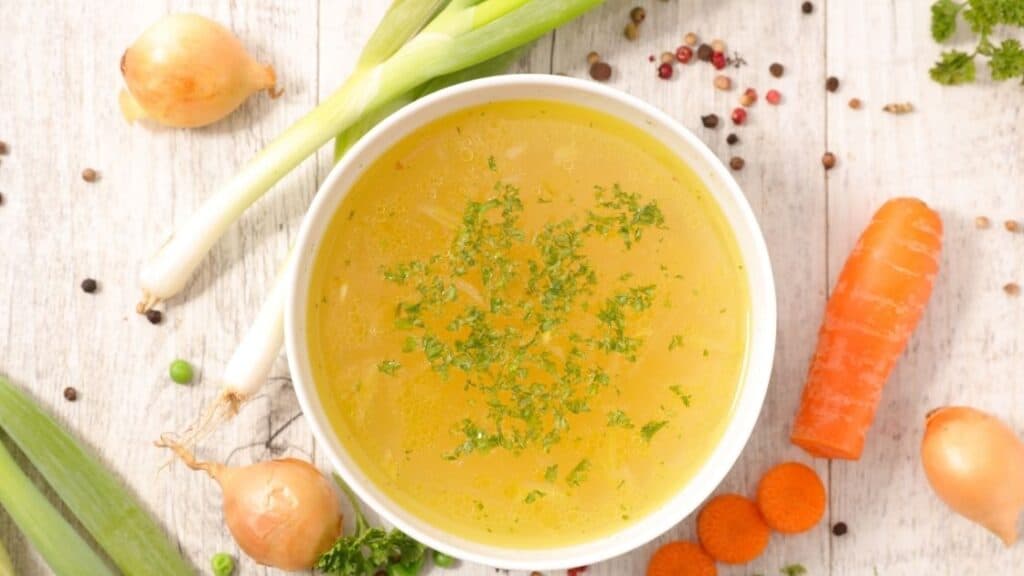 Yes, you can freeze vegetable broth to extend its shelf life.

Before freezing, you can divide the broth into measured portions that you would be likely to use in a recipe (i.e., 1 cup), or even freeze the broth in ice cube trays.

Broth lasts for several months in the freezer.

Once you thaw the frozen broth, you have about 3-4 days to eat it before it goes bad.

When using broth, you can always use the amount that you need for a particular recipe and then freeze the rest.

Even if you don’t remember to freeze the rest right away, as long as your broth is still good in the refrigerator you can pull it out and freeze it at any time (generally within the 3-4 day window discussed above).

When freezing broth, feel free to use ziplock bags or ice cube trays, or you can even use larger containers.

When using larger containers, make sure you leave a little room at the top of the container to allow the liquid to expand once it freezes. 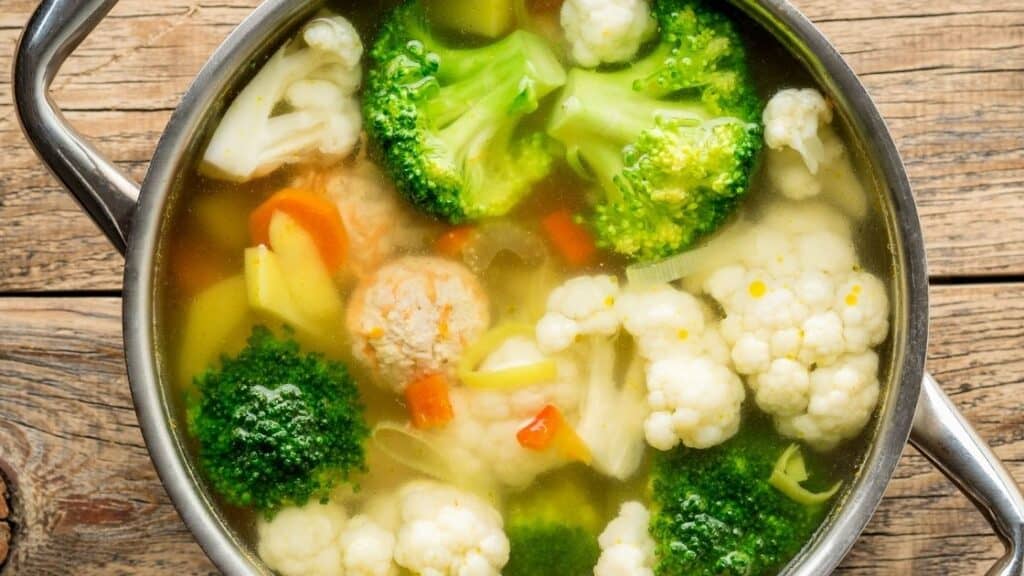 Yes, vegetable broth will go bad if you do not consume it within a few days, or if you leave it out at room temperature.

The reason why vegetable broth goes bad after a few days is due to bacterial or fungal overgrowth — this is also why refrigeration or freezing extends the shelf life of the broth, as the lower temperature prevents harmful bacteria or mold from proliferating.

Food spoilage and deterioration is a natural process.

We can delay it with multiple techniques, but we can’t fully prevent it.

Food rots due to the action of microorganisms like bacteria, yeast, and mold, which grow well at room temperatures but more slowly at lower temperatures (like the refrigerator or freezer).

Food also decays due to the action of enzymes in the food itself.

Over time, for example, green, hard bananas turn yellow and soft — this is due to enzymatic processes.

Finally, the interaction of air with compounds in the food can cause oxidation as well, which contributes to the food going bad over time.

In the case of vegetable broth, there may be oil droplets suspended in the liquid that go rancid over time once oxidized.

How to tell if vegetable broth is bad? 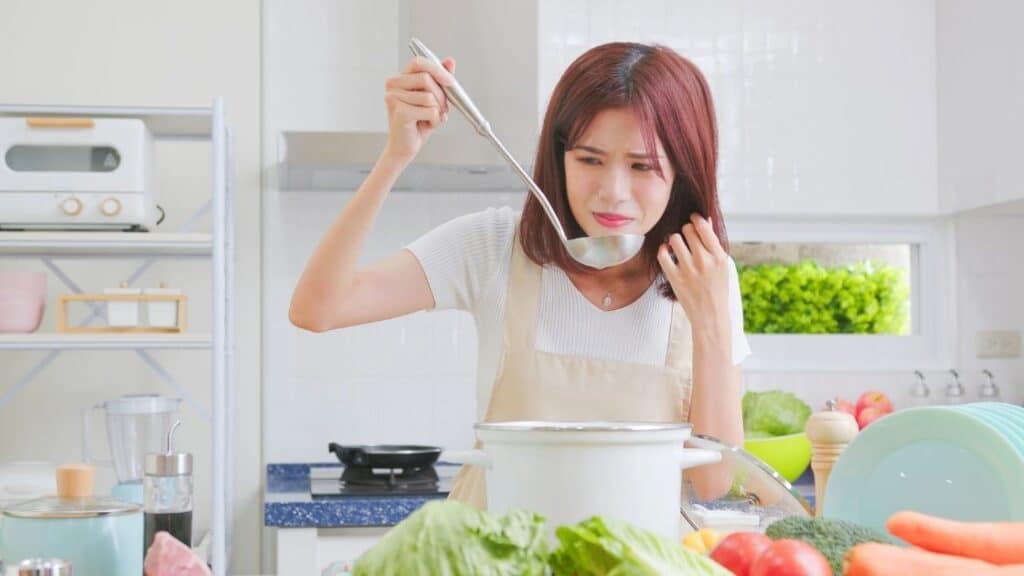 If vegetable broth is bad, you will be able to detect it through your sense of smell or taste.

If it smells “off” or sour, or if you notice foam growing on the surface of the broth, it is likely spoiled.

If you can’t detect a sour smell, taste a spoonful or two and see if the taste is “off.” If it is, discard it.

In general, you can trust your senses when it comes to detecting rotten food.

Before the invention of modern food preservation methods like refrigeration, people had to rely on their senses to discern if they were about to eat something that would make them sick.

If something looks, smells, or tastes spoiled, it likely is. 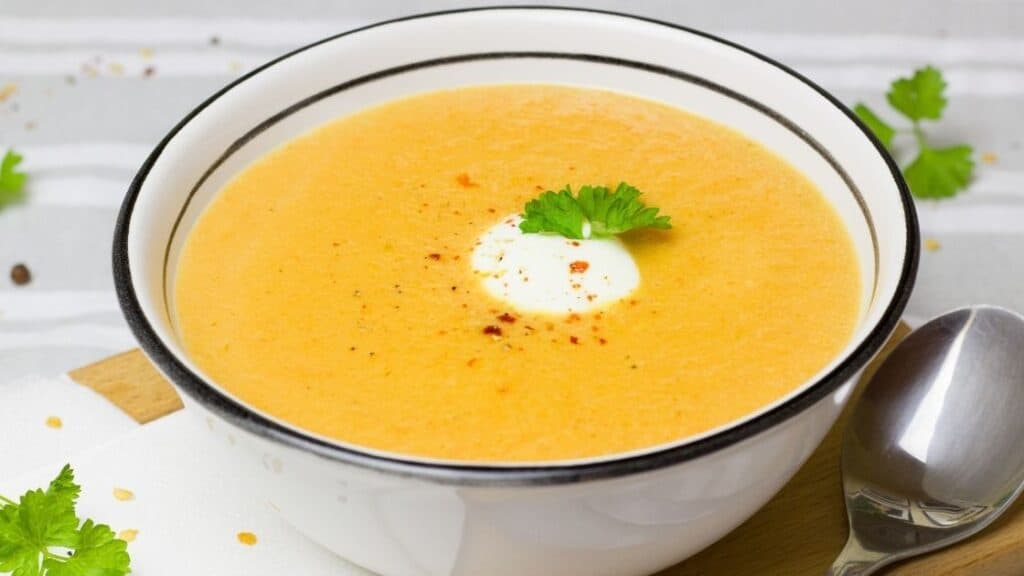 Most people have an unmistakable visceral reaction when eating or drinking something that is truly spoiled.

Be mindful when eating or drinking and you will usually be able to tell when you’re consuming something that may make you sick.