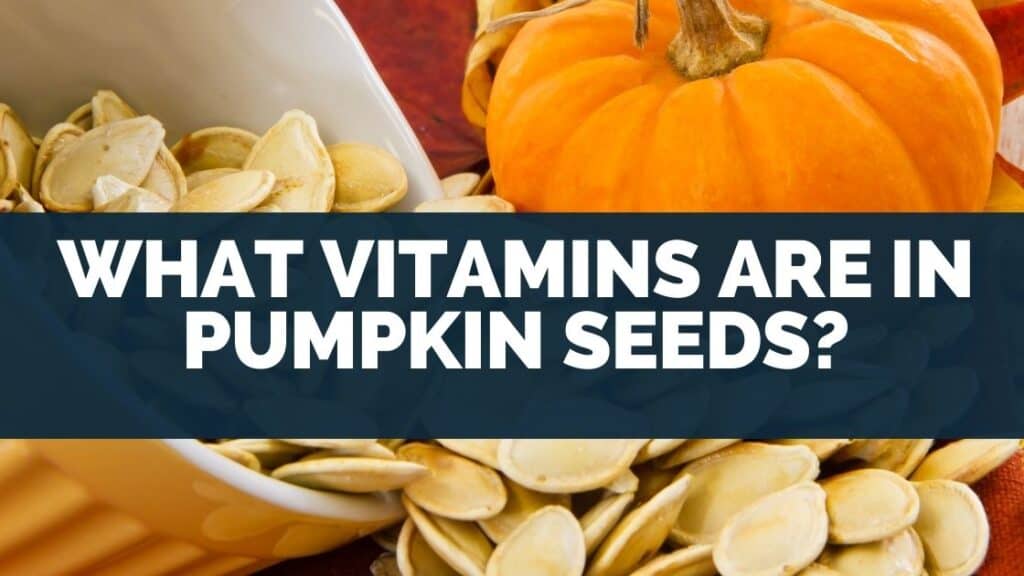 I enjoy eating pumpkin seeds and have learned they’re high in various nutrients.

Here’s what vitamins are in pumpkin seeds:

All other vitamins are not found in pumpkin seeds.

As well as, whether you can eat them raw.

Are the Pumpkin Seeds Good for You? 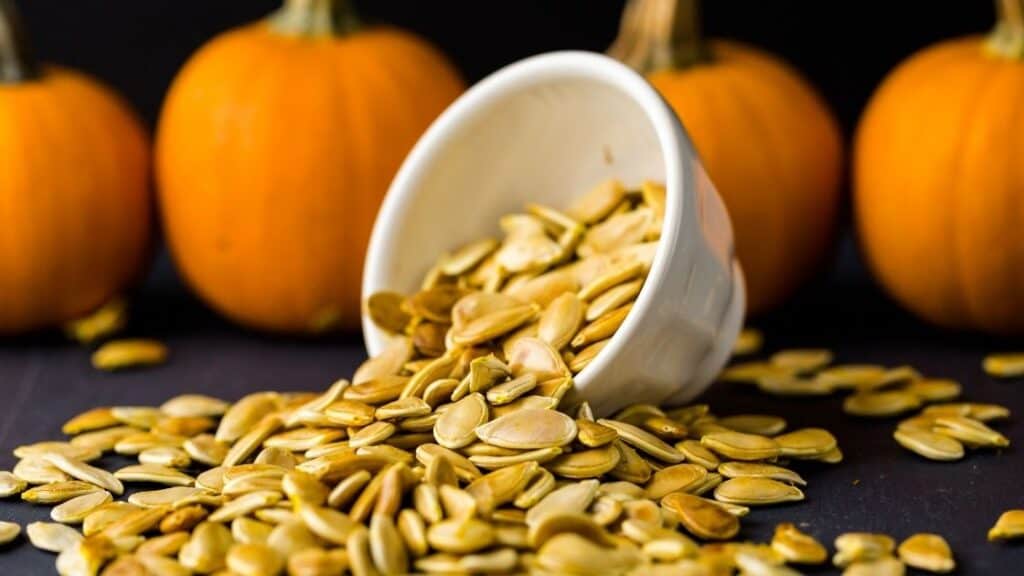 I generally snack on pumpkin seeds either on my own or with some dried fruits and other nuts.

But, are pumpkin seeds good for you?

Pumpkin seeds are good for you.

But, they contain higher than normal amounts of magnesium and phosphorus.

Excess magnesium is OK, but high levels of phosphorus can cause health issues according to the National Kidney Foundation.

Half a cup of pumpkin seeds – which is a somewhat large serving – contains 167% of your recommended daily intake of phosphorus.

So, it’s best to not consume more than about a quarter of a cup of pumpkin seeds per day on average.

Any more than that and you’ll be consuming too much phosphorus in your diet.

Also, when you take into account that other foods you’ll normally consume also contain phosphorus.

But, other than that pumpkin seeds have a range of health benefits according to medical professionals. They are:

Give you a better nights sleep

Copper, selenium, and zinc have been linked to giving you a more restful night’s sleep according to medical professionals.

The high magnesium content in pumpkin seeds is also linked to reducing stress levels which can make you more relaxed and give you longer and more restful sleep.

They also contain a compound called tryptophan which is known to help induce sleep.

Therefore, they can be good as the last snack you eat before getting ready for bed.

Inflammation is linked to many health conditions such as heart disease and arthritis.

Pumpkin seeds contain antioxidants that remove toxins from the body and reduce inflammation, as well as alleviate inflammation when it occurs.

Carcinogens are known to cause cancer.

The antioxidants in pumpkin seeds also help to remove carcinogens present in the body that have been linked to developed various forms of cancer.

Diabetes is caused by too much sugar in your diet, which causes the insulin receptors to become tolerant and absorb less insulin.

The high levels of magnesium found in pumpkin seeds are understood to regulate your blood sugar levels. Which reduces the risk of developing diabetes.

Does Pumpkin Seeds Have Iron? 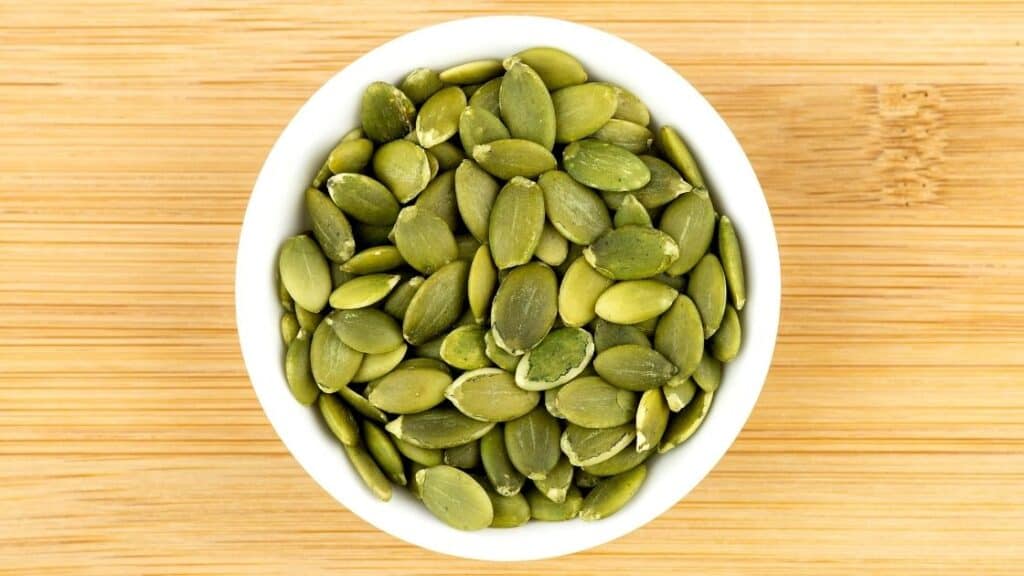 A good amount of iron in your diet is needed to stave off various health issues, and I’m interested in whether pumpkin seeds are a good source of iron.

Pumpkin seeds have 0.09% of your recommended daily intake of iron per half cup (100g) according to data provided by the USFDA.

This is a very low number and therefore pumpkin seeds are not a good source of iron.

They are, however, abundant in various other nutrients that are good for your health including magnesium and copper.

Does Pumpkin Seeds Have Protein?

I’ve experimented with different diets such as a vegetarian, and vegan diet.

But, a drawback of these diets is that you need to ensure you’re getting enough protein.

So, I wanted to know whether pumpkin seeds are a good source of protein.

Pumpkin seeds are particularly high in protein and contain 20g of protein per 100g.

Which is about 60% of your recommended daily intake of protein.

But, pumpkin seeds are high in phosphorus which is toxic in high amounts.

So you should consume a maximum of 50g (⅓ of a cup) of pumpkin seeds a day.

Therefore, pumpkin seeds can contribute to your daily protein needs, and can be helpful for people trying to put on muscle.

To get a good idea of what nutrients are present in pumpkin seeds, here’s a table that shows all of the nutrients that are present in them, as well as, what percent of the recommended daily intake of each nutrient they contain per half a cup (100g).

As can be seen in the table, the nutrients they contain are quite random.

They contain high amounts of some vitamins, whereas, they contain none of any of the others.

Pumpkin seeds broadly are high in minerals, while being quite low in vitamins.

Legumes are another type of seed that is eaten regularly and for the most part, are high in protein.

As you may know, they include seeds such as kidney beans and black beans.

I did some research into the nutritional benefits of legumes and summarized what I found in this article about whether legumes are healthy.

Most legumes need to be soaked for 5 hours to remove toxins, and you also need to cook them at a high temperature so that they aren’t toxic.

It’s often recommended to soak pumpkin seeds prior to roasting them.

But, this is an optional step and isn’t required.

Can You Eat Pumpkin Seeds Raw? 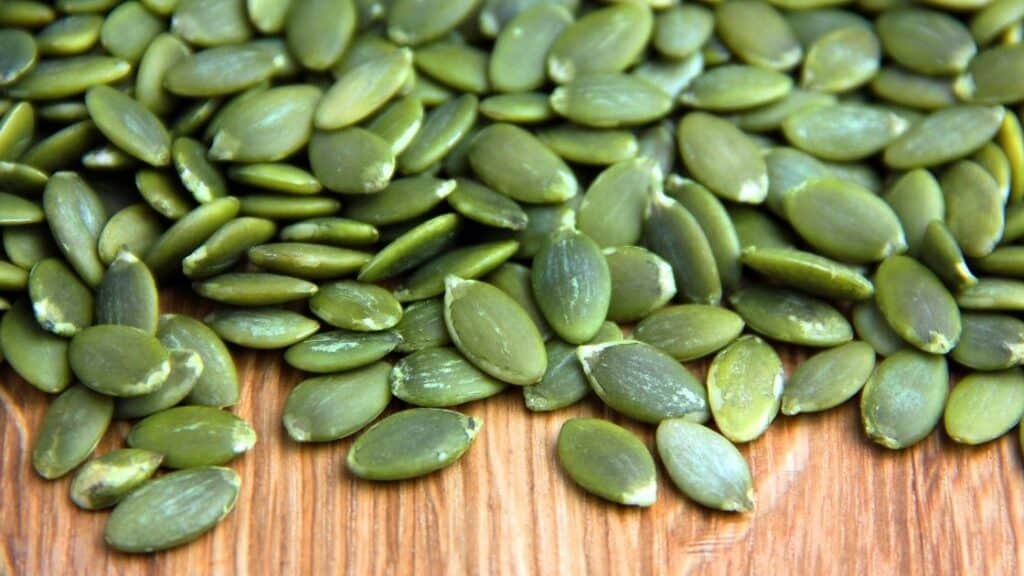 I scoop out pumpkins seeds when I’m preparing to roast them to cook, and generally discard them.

But, is it possible to eat them straight from a pumpkin without cooking?

It’s also fine to eat the shells and the seeds raw.

The taste of pumpkin seeds is improved by roasting them.

Both raw and roasted pumpkin seeds are available in stores.

People have reported that they last up to about 3 days before they go soggy, and have a yuck texture.

Roasted pumpkin seeds by comparison tend to stay fresh if kept sealed and can last a week or so before they start to go soft. 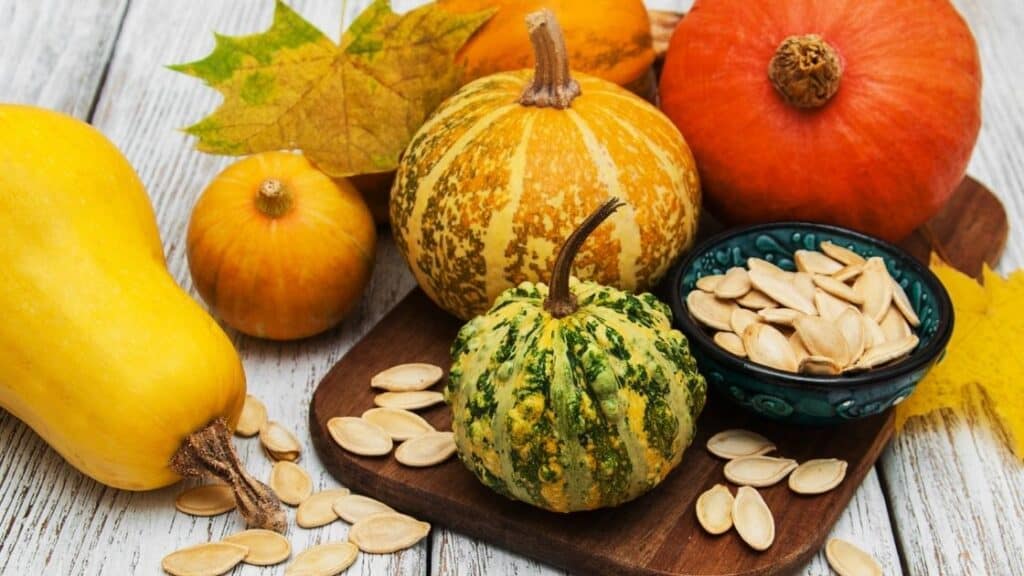 I’ve recently learned that it’s possible to have intestinal parasites without being aware of them.

And have been learning about different remedies to get rid of them.

So, are pumpkin seeds good for removing parasites?

The shells are particularly sharp and fibrous which can damage and weaken parasites.

They also contain a compound called cucurbitacin which weakens and kills parasites in the digestive system.

They are also recommended for pet dogs, however, you may need to sneak them into their food depending on how fussy your dog is.

A study also found that cucurbitacins that help to remove parasites from the digestive system also are effective at alleviating atherosclerosis, cancer, inflammation, and diabetes.

Do You Eat the Whole Pumpkin Seed Shells? 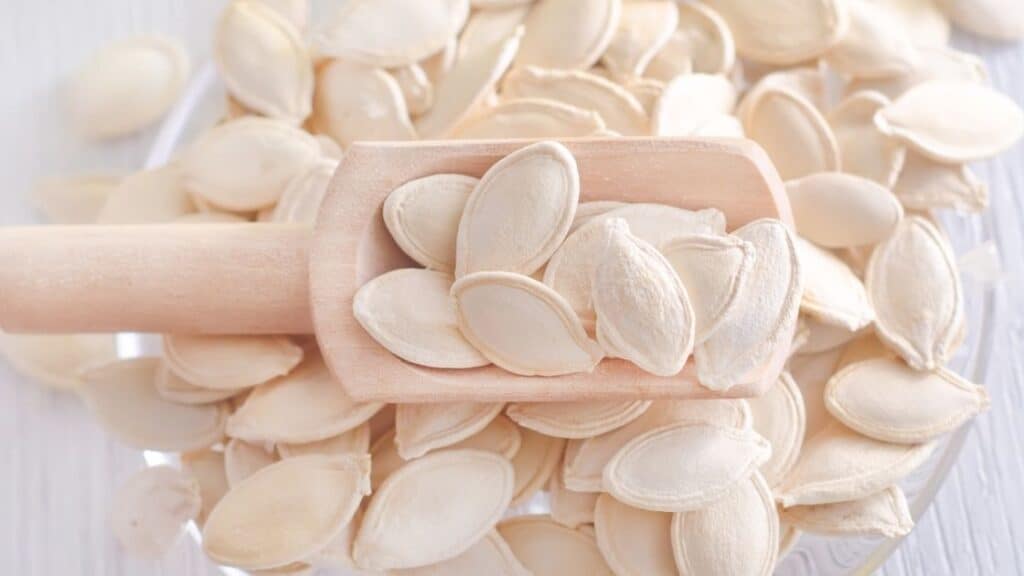 When I first ate pumpkin seeds with a friend they cracked them open with their teeth and only ate the seed so I did the same.

But, later on I bought some pumpkin seeds and ate the whole thing including the shell.

So, I wanted to know whether you’re supposed to eat the whole pumpkin seed or just the seed itself.

Overall, it’s fine to eat both the shell and the seed of pumpkin seeds.

The shell of pumpkin seeds contains the same beneficial nutrients as the seed itself.

The shells of roasted pumpkin seeds are tough and require a lot of chewing to break them down.

(in this article I answer a common question o get asked;  can we eat chia seeds in fast)

Once chewed they still have a tough, sharp texture which feels a bit funny to swallow.

Many pumpkin seeds are seasoned with salt, as well as chili and other spices.

When chewing them the added flavors are swallowed and the seeds that are left in the mouth have a bland flavor.