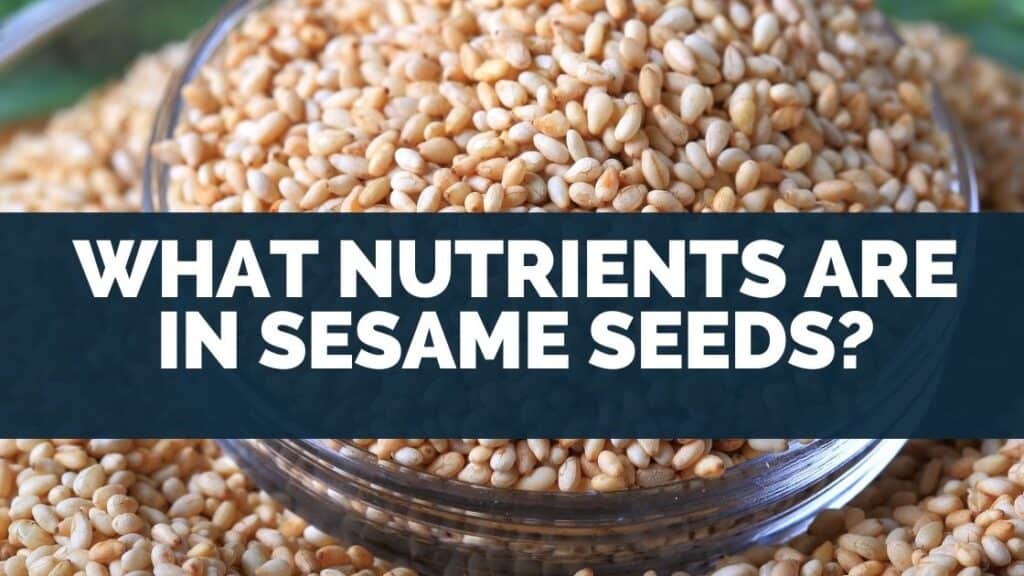 I like to eat sesame oil, and sprinkle sesame seeds on a range of different dishes.

And I was curious what nutrients are in sesame seeds.

I looked at the lab tests that calculated the nutrients found in sesame seeds and here’s what nutrients they have:

Sesame seeds are high in minerals such as:

They are also quite high in fiber and protein.

But they are low in vitamins such as vitamin C, and vitamin B-12.

In this article, I will explain how healthy sesame seeds are, whether sesame seeds contain gluten and whether they are good if you’re on a ketogenic diet.

How Healthy Are Sesame Seeds? 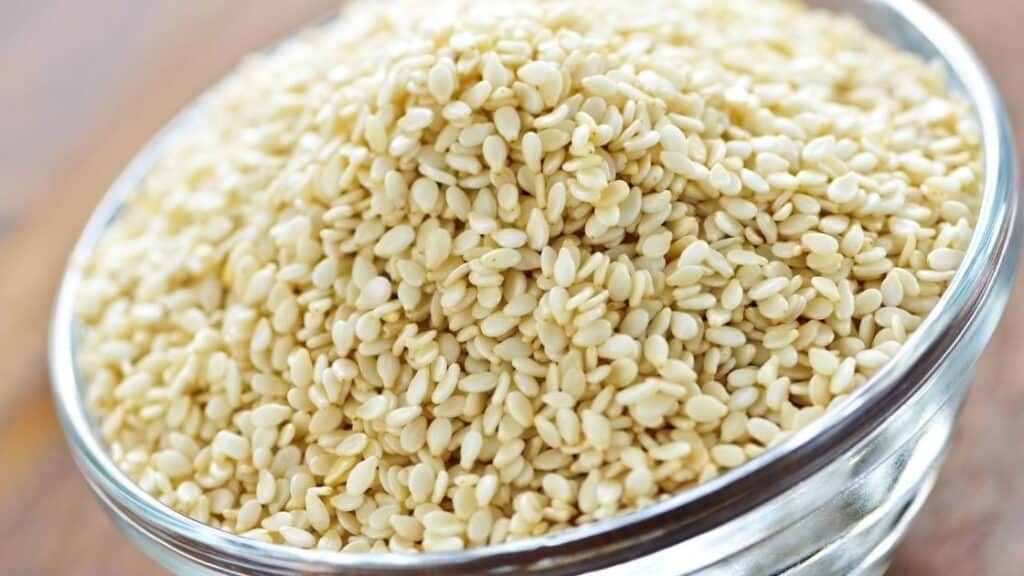 But, how healthy are they in general, and can you eat too many sesame seeds?

However, you should aim to consume only normal amounts of sesame seeds, such as sprinkling them on certain foods.

Sesame seeds contain high amounts of copper, and excess copper consumption is linked to various health issues and should be avoided.

A good rule of thumb is to consume less than 30g or about a tablespoon per day consistently.

If you consume more than that you will be consuming excessive amounts of copper.

Sesame seeds are quite high in magnesium, however, magnesium is generally OK to eat in large amounts as it doesn’t cause any negative effects on the body.

If you do consume too much magnesium your body will attempt to expel it by causing diarrhea and vomiting.

They also contain high amounts of phosphorus, which the National Kidney Foundation has stated pulls calcium from the bones and causes other health issues.

Here’s a table that shows the nutrients found in half a cup of sesame seeds.

It shows how much of your recommended daily intake of each nutrient they contain:

At a quick glance, you can see that they are relatively low in vitamins such as vitamin E, and vitamin C.

Sesame seeds are generally used as a garnish. And a topping on baked goods like burger buns.

So, most foods won’t contain large amounts of sesame seeds.

I have come across sesame seeds bars though and have eaten them from time to time in the past.

They are usually quite small and are about 100g in weight.

It can be OK to consume them very rarely.

But, in my opinion, these should largely be avoided due to the high levels of minerals in sesame seeds.

When you consume a sesame seed bar it can give you toxic levels of copper, and phosphorus.

Interestingly, I found when I ate sesame seed bars they were quite hard to eat.

Perhaps my body was trying to tell me something.

However, in small amounts, they are good for you to eat, and will contribute towards the number of beneficial nutrients you eat during the day.

One of my favorites is when sesame seeds are used on sushi.

Is Sesame Oil Good For You

I assumed that sesame oil has the same nutrients found in sesame seeds, and therefore, you should also not consume too much of it.

Therefore, based on the nutrients in sesame oil, it’s perfectly fine in normal quantities, as a salad dressing, or cooking oil.

But, like all foods, it’s best to consume a varied diet to get a wide range of nutrients.

There are also some other specific health benefits to sesame seeds due to the nutrients that they contain.

And they help to lower cholesterol and keep your blood pressure at healthy levels.

A healthy level of cholesterol lowers the risk of heart diseases.

It gets a bit in the weeds to discuss the difference between good and bad cholesterol.

And what the healthy levels are, but Harvard Medical School has stated that they contain compounds called lignans and phytosterols which are good at helping to lower bad cholesterol.

Good source of minerals that are good for regulating blood pressure

Calcium and magnesium are found in high amounts in sesame seeds.

They contain 39% and 89% of your recommended daily intake of calcium and magnesium per day.

However, that is for a large number of sesame seeds (100g or half a cup).

Both of these are known to be good for regulating blood pressure.

High blood pressure puts additional strain on your arteries which makes it difficult for blood to circulate around your body which can lead to a range of health issues.

As you may have seen or experienced yourself, blood pressure is measured using an armband that is inflated using a hand pump to measure your blood pressure.

Does Sesame Seeds Have Gluten? 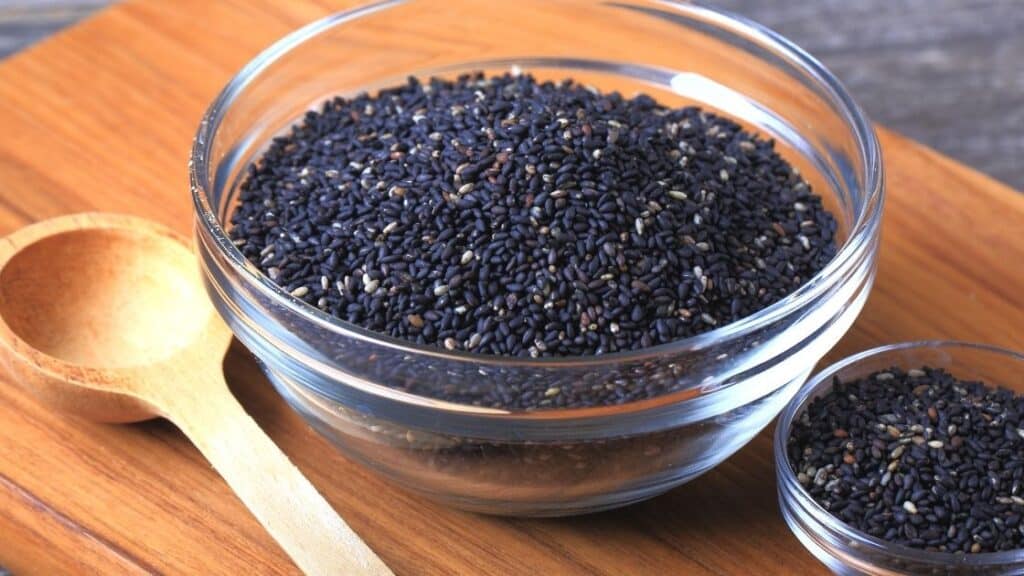 Certain folks are gluten tolerant, and I have experimented with a gluten-free diet.

So, I thought I’d cover whether sesame seeds contain gluten.

Sesame seeds are naturally gluten free according to medical professionals.

However, it’s best to check the label of sesame seeds, as they can be produced in facilities that also process gluten.

As a result, cross-contamination can occur.

It will typically say on the label something to the effect of ‘produced in a facility where gluten and soy are also processed.’

Any cross-contamination can be quite small, and it will be some dust or the like that gets onto the sesame seeds.

However, it is best to err on the side of caution, particularly if you have celiac disease or gluten intolerance. 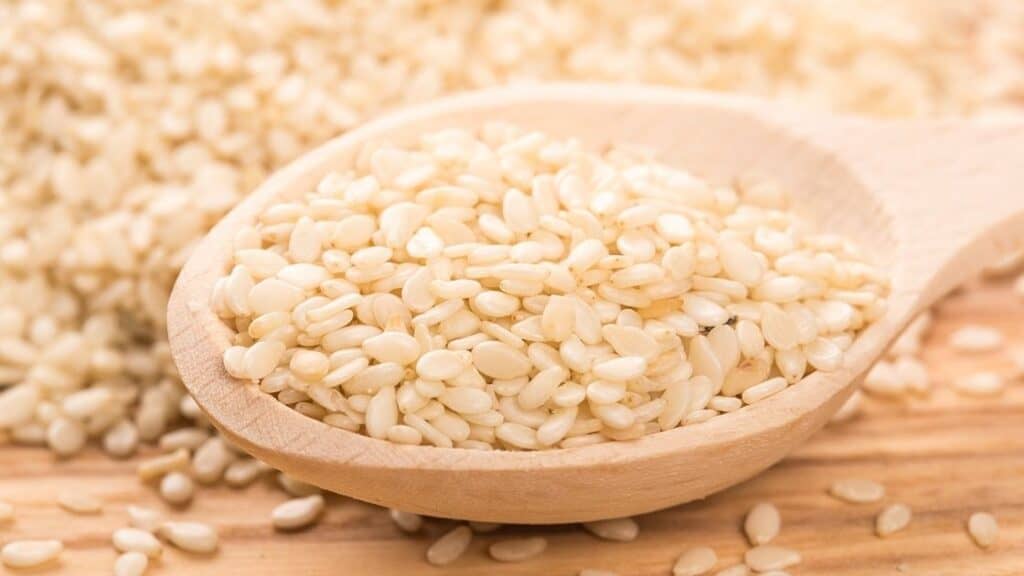 I’ve learned that zinc is good for your metabolism and your immune system.

It’s also recommended that you should consume a diet that contains zinc.

So, do sesame seeds contain zinc, and if so how much?

They contain 70% of your recommended daily intake of zinc per 100g (half a cup).

But, it’s not recommended to consume more than about a tablespoon of sesame seeds a day due to their high amounts of various minerals such as copper.

Sesame seeds should be used sparingly, similar to a spice or garnish.

I like to sprinkle them over stir fry, a vegetable salad, and sometimes even a fruit salad.

But, sunflower seeds are generally tastier for that.

I looked at the nutrients found in sunflower seeds, how to prepare them, as well as, whether you can eat them raw in this article about the health benefits of sesame seeds.

Are Sesame Seeds Good for Keto? 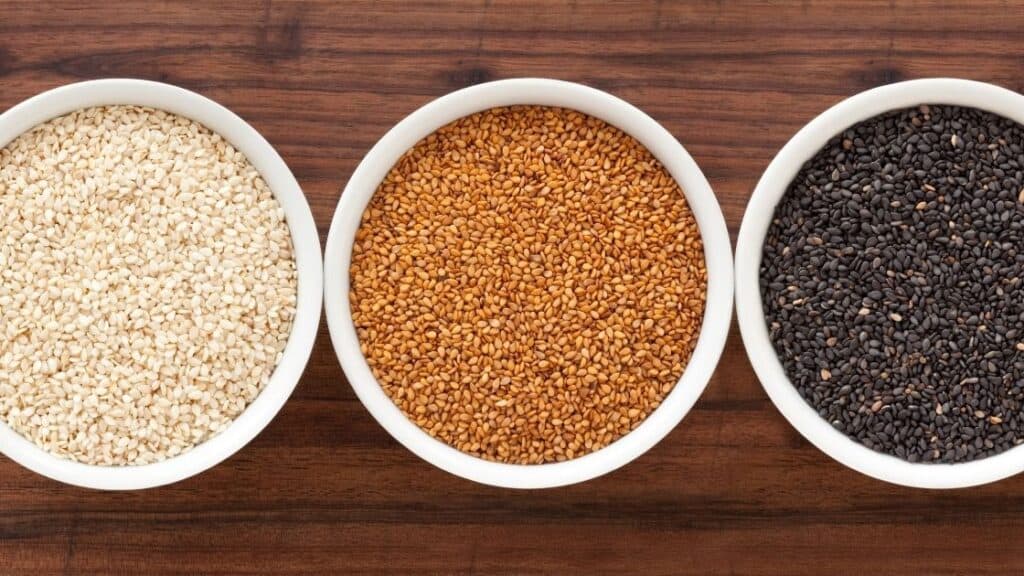 I’ve dabbled in different diets such as the ketogenic diet to see if I notice any improvements and find it to be quite beneficial.

Sesame seeds are good for the ketogenic diet.

The ketogenic diet recommends foods that have an 8:1 fat to carbs ratio.

But, because they are consumed in small amounts, they’re still considered good on a ketogenic diet.

Ideally, you would consume a different kind of seed or nut that has the highest fat to carbs ratio.

Examples of seeds and nuts that are better for the ketogenic diet are:

Other nuts and seeds that are also considered good on the ketogenic diet are: