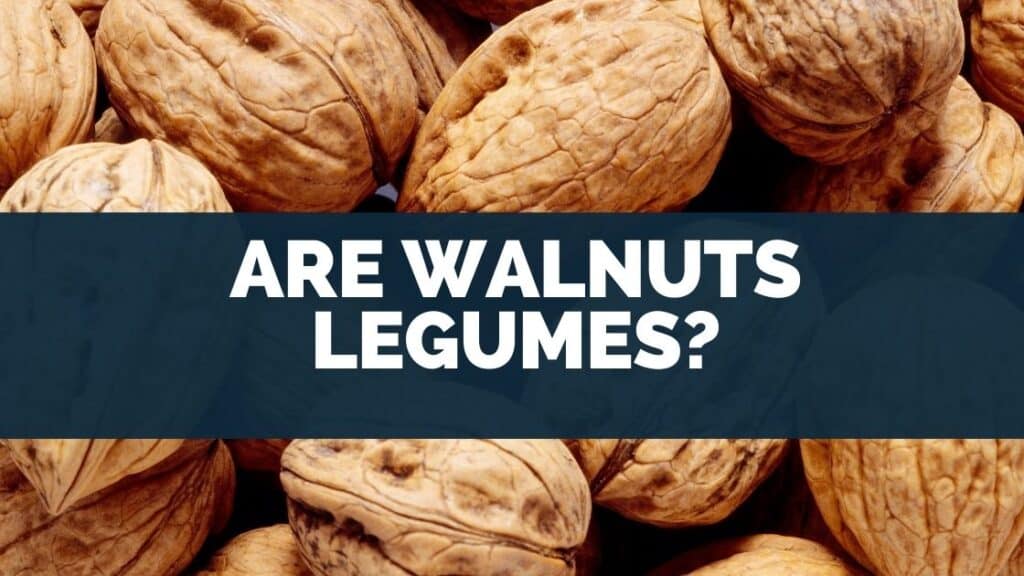 No, walnuts are not legumes.  Legumes are actually dehiscent fruits, releasing their seeds naturally by splitting open once matured.

The legume is the dry seed of the plant.  Legumes include lentils, soybeans, peas, chickpeas, peanuts, and beans. Walnuts are the edible seed of the walnut tree. It has a hard exterior and the walnut itself looks similar to a small brain.

Walnuts can be consumed whole or chopped but must be shelled first. This is one of the reasons they cannot be classified as a legume, as they need external pressure in order to split open. Legumes split open once they reach maturity in order to release the seed inside.

Walnuts do not do this and so cannot be considered a legume.

Typically, inside a legume plant, there are multiple seeds.

However, with walnuts, there is a single seed encased in each fruit, which means it is not a legume.

Go to top
Table Of Contents show
1 Is walnut a nut or drupe?
2 What kind of fruit is walnut?
3 What are some examples of drupes?
4 What nuts are drupes?

Is walnut a nut or drupe? 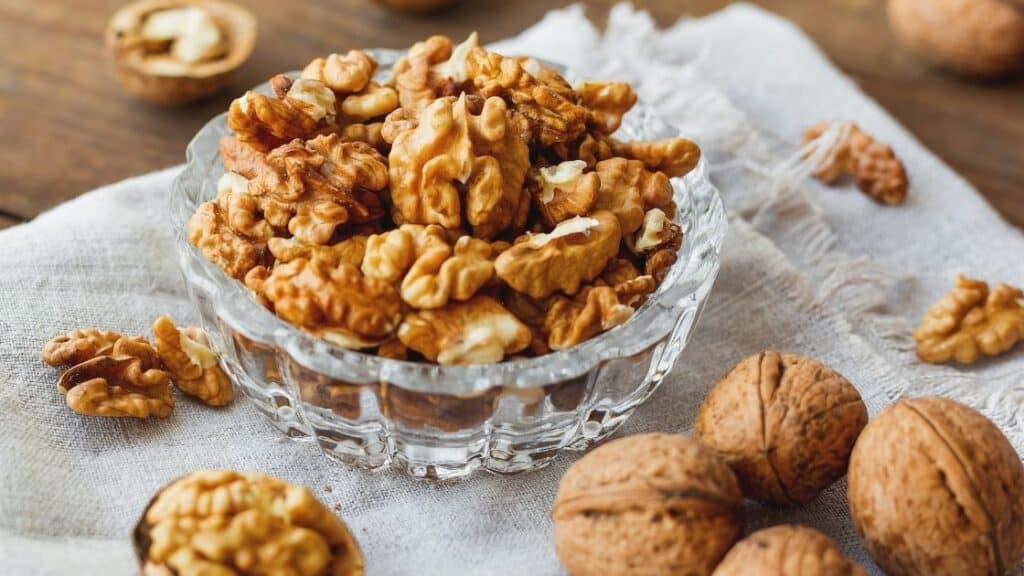 Neither, walnuts are considered to be drupaceous nuts.

This may seem confusing, as generally walnuts are seen as nuts, to classify them otherwise seems odd.

Botanically, however, they are not seen as a true nut. What makes a true nut you may ask?

A nut is a dry, hard, indehiscent fruit. Indehiscent means at maturity, this fruit does not open by itself.

This means that anything that falls out of this scope, is not a nut. A nut is not a nut when it is a legume or a drupe. In the case of peanuts, which are legumes, walnuts are more of a drupe than a nut.

So, we cannot unequivocally say that a walnut is either a nut or a drupe because whilst they have characteristics of both, they do not fulfill the criteria of either.

Walnuts have similar characteristics to drupes. Once fully ripened, the green husk is removed from around the walnut shell.

As it rises, this husk begins to get brittle and the shell inside hardens. Inside the shell is the “meat” which is the walnut itself.

Drupes are made up of three layers, and are fleshy fruits surrounding a hard seed, in this case the walnut.

The nutritional profile of walnuts makes it very similar to true and culinary nuts.  Nuts have been said to be helpful for boosting heart health, brain function, supporting weight loss, and managing blood sugar.

What kind of fruit is walnut? 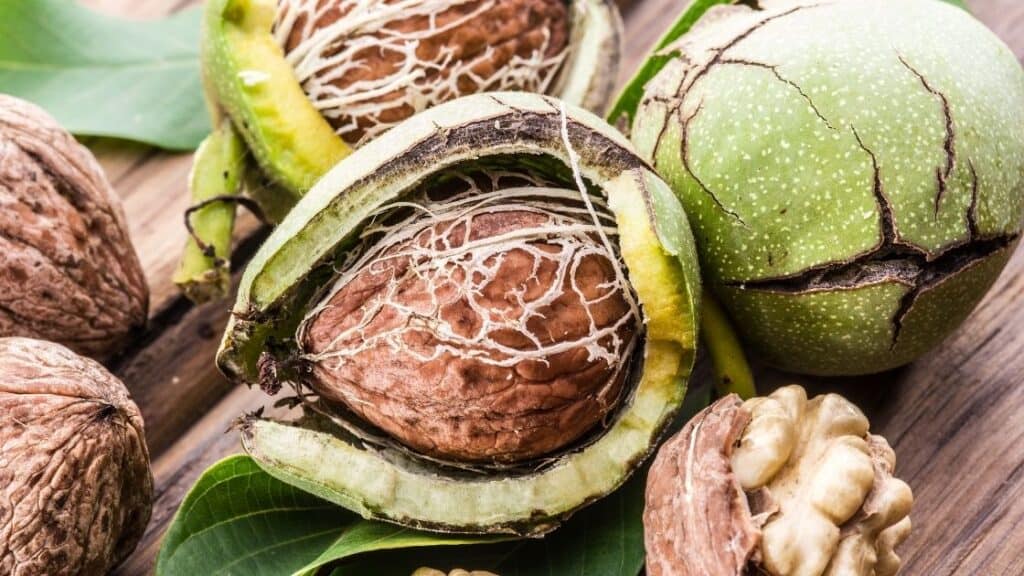 Walnuts can be classified as a stone fruit.

It may be a little confusing but both nuts and drupes are considered to be fruits.  So what exactly is a fruit? Botanically, a fruit is a seed-bearing system in flowering plants, which is formed from the ovary.

Fruits are essentially what has developed from a mature ovary.  Although walnuts are not exclusively a drupe, under fruit classification, they would fall under the category of stone fruit. Stone fruits are also known as drupes.

They get their name from the fact that at the center of the fruit there is a hard stone. Usually, the skins of stone fruits are smooth or fuzzy, think mangoes and peaches.

There are various fruits that are classified into their own categories. This depends on whether they are fleshy or dry.

Drupes would come under the fleshy category and drupe fruits would be classified as such. Berries are another category, these fruits have several seeds and a fleshy outer layer.

Pomes, which include apples and pears, have a lot of seeds with sweet fleshy tissue around the outer layer.

Last but not least, there is Hesperidia and Pepos, both of these are fleshy fruit with a leather rind.

This includes lemons for the hesperidium category and cucumbers and squash for the pepo category.

For the dry fruits, they can be classified as follicles, legumes, capsules, nuts, achenes, samaras, cargo-sea, and schizocarps.

What are some examples of drupes?

Coconuts, mangoes, peaches, almonds, and olives are examples of drupes.

Drupes are fruits that have three layers. The exterior layer, the fleshy layer, and the hard internal layer which contains the seed.

The word drupe stems from the Latin word, “drupa”, meaning wrinkled olive. The first layer of the drupe is the exocarp and is the skin of the fruit.

The fleshy part of the drupe is called the mesocarp, and the seed part is called endocarp. The endocarp contains just a single seed of the drupe.

Mangoes have been named the most commonly eaten fruit around the world. Unlike walnuts or almonds, in this instance, it is the fleshy layer that is consumed.

Coconuts are what is known as a dry drupe.  This is because the second layer, generally fleshy, is in fact fibrous.

Coconuts in fact have the three layers that are required to be classed as a drupe, however typically when you purchase a coconut, you are only receiving the inner layer, this layer surrounds the inner seed.

Despite being savoury, olives are considered to be drupes as they have a pit inside.

Although in the culinary world, olives are seen as vegetables.

What nuts are drupes? 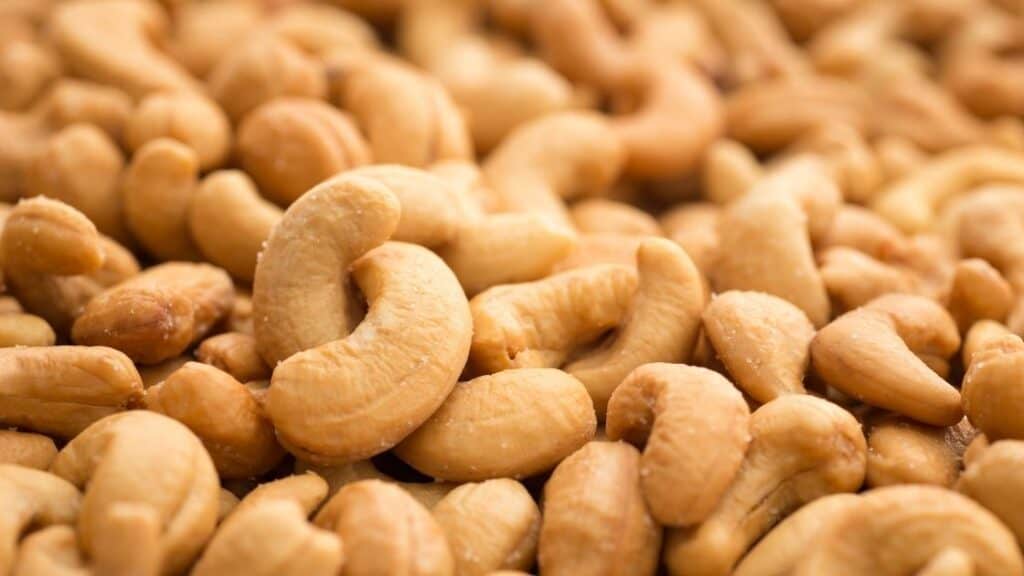 Almonds, cashews, pistachios, and pecans are all drupes.

Unlike coconuts, peaches, and mangoes which are also drupes, with almonds, for example, we value the hard seed as opposed to the fleshy layer of the drupe.

Whilst it may seem that mango and an almond are worlds apart, we are in fact, appreciating and consuming different parts of the fruit which is why they seem so different.

Botanically speaking, they are both classified as drupes. The almonds we consume and commonly viewed as a nut, are the seeds of the almond fruit.

Almond fruit grows on a tree, once ripe, the flesh and shell are removed, and we are left with an almond.

The fleshy outer layer of this plant means that it cannot be classified as a true nut.

This does not mean that you no longer need to refer to almonds or walnuts as nuts, because the culinary use of the word nut is a lot broader and encompasses these fruits.

What about cashews? Cashews grow attached to a pseudofruit.  By definition, fruits have seeds inside, however as the cashew seed is growing outside the fruit, this makes it a false fruit.

The cashew apples which grow attached to the cashew nut, are edible but highly perishable. A small, kidney-shaped, fruit, the cashew apple is a kind of thick stalk that the nut hangs from.

The cashew apple is a lot bigger than the nut but is a kind of accessory as it is the cashew nut itself that is used for reproduction. These cashew apples typically grow in tropical climates, in Europe they are almost unheard of.

This is because they are extremely sensitive to touch and can perish easily. They are very rarely transported far away from their native countries.

Pistachios are another seed of a drupe. Pistachio trees grow grape-like groups of green fruits, which harden and turn red.

Inside the fruit is the pistachio seed, which is the edible part of this fruit. As the fruit begins to mature, the shell hardens and opens, exposing the seed inside.

One of the features of a true nut is that it does not open by itself once matured.

This means that due to the composition, growth, and properties of pistachios, they cannot be classed as a true nut.

Although, in the culinary world and colloquially they will certainly be referred to as a nut.

Yes, even the pecan is not a true nut and in fact a drupe. The pecan tree is cultivated for its seed, the pecan.

The exterior of the pecan is a green husk that begins to turn brown.

Once brown, this drops off and leaves a thinly shelled nut which is to be harvested.

Native to North America, they are much loved for their rich flavor and are used heavily in desserts and main dishes.

Many of these ‘nuts’ that are not technically nuts are labeled as tree nuts.

Tree nuts can be defined as the seeds of particular fruit-bearing trees.

They include the commonly known “nuts” that in fact grow on trees.

Oftentimes, when someone has a nut allergy, they specifically have a tree nut allergy as other ‘nuts’ are quite different to these and would not cause an allergic reaction.

Botanists and biologists define and classify based on a number of factors that we don’t tend to take into account.

This is why much of their classifications seem at odds with what we know.

The culinary or colloquial terms we use don’t look at origins and instead, we have grouped together groups of foods and fruits that technically don’t actually belong in the same category.

Walnuts are classified as a drupaceous nut, they are not a legume, drupe or not.

Instead, they fall somewhere in between a drupe and a nut.

Other “nuts” such as almonds, cashews, and pecans are in fact drupes and not true nuts at all.

Included in this category of drupes are mangoes, coconuts, and peaches.