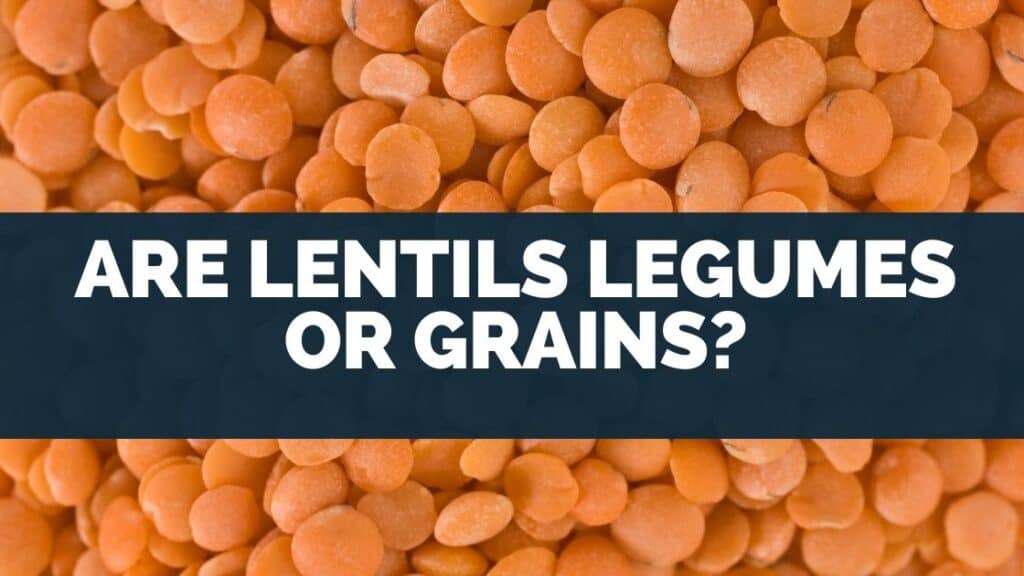 Lentils, or lens culinaris, get their name from their curved lens shape. One of the earliest cultivated crops, its use dates back to the Bronze Age and can be traced back to ancient Rome and Egypt.

Lentils are a legume. Legumes are the edible parts of a plant from the Fabaceae family, also known as the Leguminosae family.

In addition to that, lentils are also pulses.  Pulses are a type of dry legume that comes from the seed of Fabaceae plants.

Confusing huh. Legumes, pulses, beans, and peas are often confused with each other.

We’re happy to help clear it up to so let me explain.

Think of legumes as the entire food group. They can be any part of a Fabaceae plant, including stems, stalks, leaves, pods, and vines.

Common legumes include all beans, peas, and perhaps most surprising, peanuts!  These imposter nuts grow underground and are technically legumes.

Pulses are the dry seeds that come from Fabaceae plants. All pulses are legumes, and common ones include beans, peas, and lentils.

Beans and peas are different types of pulses, which makes them all legumes.

Better?  Lentils too, are a type of pulse, which makes them also a legume.

Their use has been recorded as far back as 8,000 BC in what is now northern Syria.

Back then, lentils were regarded in Greece as poor man’s food.  However, in Egypt, it was quite the opposite.

Lentils have been found in remains of royal tombs, indicating usage by the ruling class.

Today, lentils have risen to superfood status and are used widely around the world. There are various types of lentils, including:

Brown – The most common variety, brown lentils have an earthy flavor and are used for soups and stews.

They can also be used to make the patty of a veggie burger.  Green – Similar to brown lentils, green lentils have a slightly more robust flavor and vary in color from pale to mottled green.

They are frequently used in side dishes and salads. Red / Yellow – These are split lentils with colors that can be yellow, orange, or red.

They are commonly found in Indian and Middle Eastern cuisine.

Because they are “split”, they cook quicker and are often used as a puree to thicken soups and stews. Black Beluga – These lentils are shiny and smaller than the browns and greens.

They have a rich flavor and are usually added to salads.  Puy – Blueish-green and rich in flavor, these specialty lentils grow in a specific region in central France called Le Puy. Surprise!

Go to top
Table Of Contents show
1 Are Lentils Considered A Grain Or Protein?
2 Why Lentils Are Bad For You?
3 Is It OK To Eat Lentils Every Day?
4 How Many Times A Week Should You Eat Lentils?
5 Conclusion

Are Lentils Considered A Grain Or Protein? 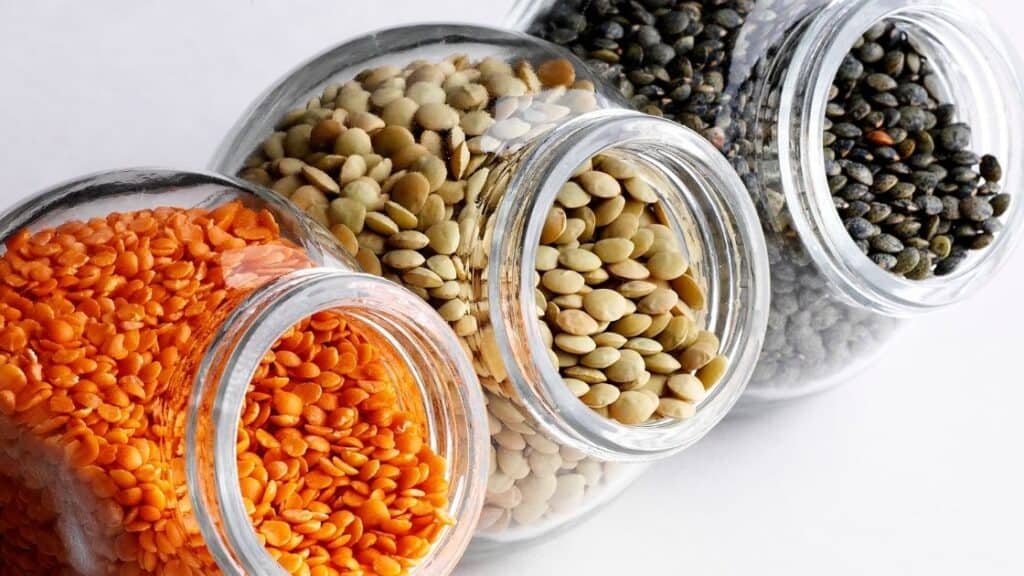 Neither. Lentils are a type of legume, or a pulse, which is a specific type of dried legume.

Each lentil seed contains about 28% of protein.

Their high protein content makes them a favorite with vegans, vegetarians, and anyone embracing a plant-based diet.

Some that use legumes as a primary protein source will place them in the “protein food group”.

In addition, they are high in dietary fiber, which supports the growth and maintenance of healthy gut bacteria called probiotics.

These little superfoods come jam-packed with fiber, protein, carbohydrates, and all kinds of beneficial nutrients.

Here is the nutritional content of 100g (roughly ½ cup) of lentils:

Lentils are high in polyphenols, a category of potent phytochemicals.

Polyphenols have been credited with antioxidant and anti-inflammatory properties, even stopping the growth of cancer cells. (Source)

In addition to all the good stuff:

No wonder they are touted as a superfood!

Lentils can be cooked in a variety of ways, including:

Why Lentils Are Bad For You? 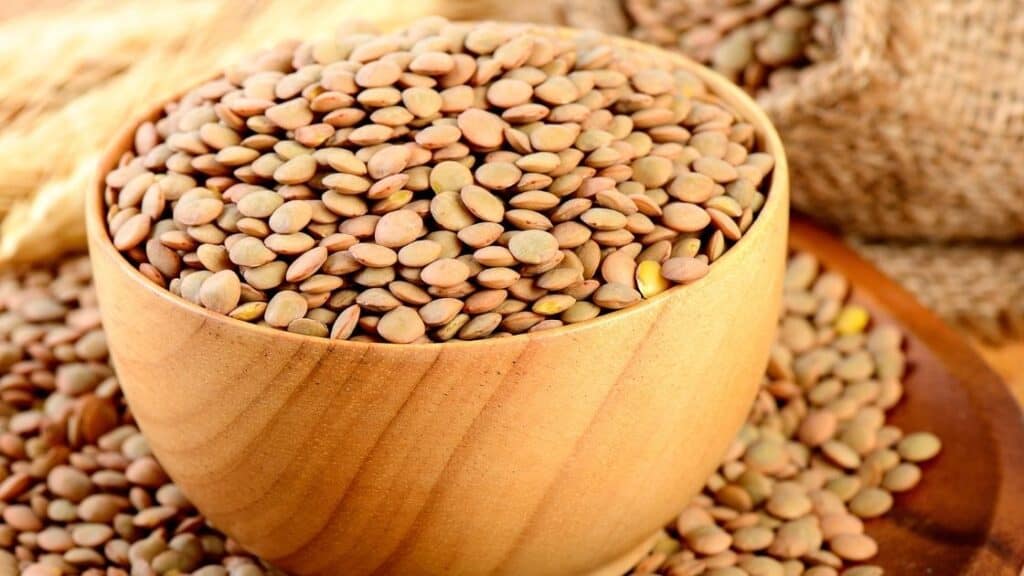 Nothing is perfect, and lentils are no different. Although the good far outweighs the bad, there are a few potential side effects of regular lentil-eating.

Lentils, just like other legumes, contain a protein called lectins.

Active lectins have been known to cause gastrointestinal difficulties and prevent the absorption of nutrients.

Milder side effects include bloat and gas.

Lectins are also thought to interfere with the absorption of nutrients like zinc, iron, calcium, and phosphorus.

They can bind themselves to the digestive tract and cause complications, especially in those with pre-existing gastrointestinal conditions such as IBS (Irritable Bowel Syndrome).

However, lectins are sensitive to heat and will deactivate when exposed to high heat or cooked in a pressure cooker.

Lectins are also water-soluble. Soaking lentils in water before cooking will effectively remove lectins. It is important to note that lectins are only present in raw legumes.

Undercooking or eating raw legumes is likely to cause a bad reaction to lectins.

Some symptoms include nausea, vomiting, diarrhea, or an upset stomach. At the very least, you’ll probably experience bloat and gas. It is rare to eat foods with high levels of lectins.

Most foods containing lectins like beans and lentils are only eaten cooked.

Is It OK To Eat Lentils Every Day? 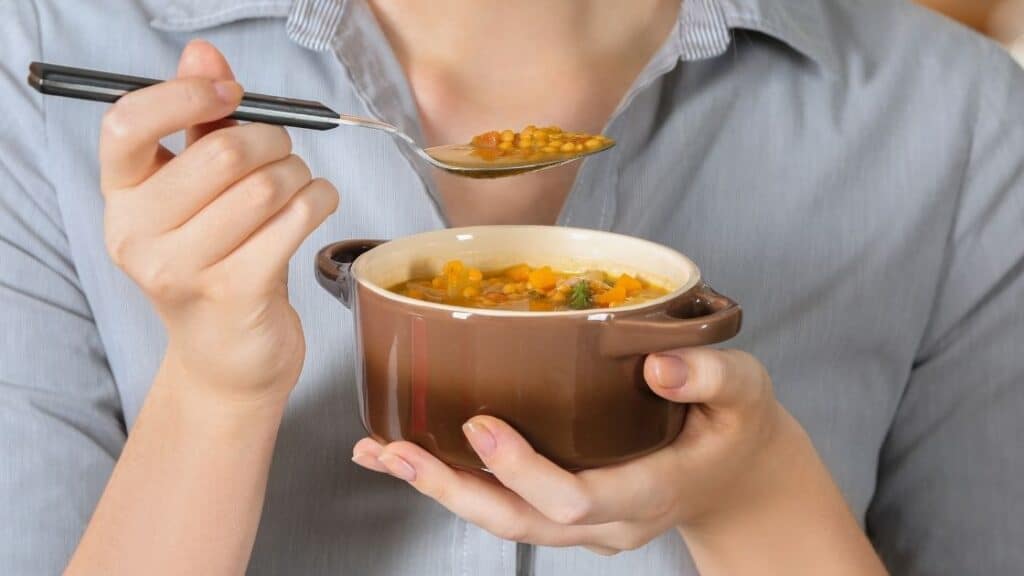 As long as they are well-cooked or pre-soaked, a daily dose of lentils is not just okay; it is recommended.

Numerous organizations such as the American Heart Association and the American Diabetes Association have stated that lentils, like all legumes, are a superfood that has countless health benefits.

St Michael’s Hospital in Toronto, Canada, released a study in 2014 showing that a daily serving of beans, peas, chickpeas, or lentils can significantly reduce the risk of heart disease.

Heart disease is the leading cause of death in the United States, responsible for about 647,000 deaths each year.

That’s one in every four deaths. Yikes.  India is responsible for about half of the world’s consumption of lentils.

They have been cultivating and consuming lentils daily since 2,500 BC. You would be hard-pressed to find an Indian meal without at least one lentil dish.

After Canada, India is also the biggest producer of lentils. The famous Indian soup, dal (or daal), combines different spices with lentils.

At times, other legumes like chickpeas are used. The word “dal” has its origins in the Sanskrit word that literally means “to split”.

Dal is a term that refers to all split pulses and is also the name of the famous soup dish made of these pulses.

A Harvard study tracked over 90,000 women for eight years and found that those who ate beans or lentils at least twice a week had a 34% less risk of developing breast cancer.

Even ½ a cup of beans a day has been known to lower the risk of heart disease by 16%.

How Many Times A Week Should You Eat Lentils?

Both the USDA (US Department of Agriculture) and the Australian Dietary Guidelines recommend eating ½ a cup of lentils, or any legume, between two to three times a week for a balanced diet.

Legumes are unique and are considered part of both the vegetable and the protein group.

They are one of the five vegetable groups based on their nutrient content.

The USDA recommends two to three cups of vegetables a day for women and three to four cups a day for men.

Some proponents of a vegan or vegetarian diet have included legumes as a primary protein source and eat them daily to meet the recommended daily intake.

Most professionals recommend between 0.8g and 1g of protein per kilogram of bodyweight based on age, lifestyle, and muscle mass.

That roughly equates to between 40g and 60g a day for the average person living a sedentary lifestyle.

Therefore, athletes and bodybuilders have a much higher protein intake.

Whether you are seeking a plant-based diet or you are a meat-eater looking at supplementing your diet with extra fiber and protein, lentils come packed with nutrients and are undeniably healthy.

They have been nourishing us for tens of thousands of years and will continue to be an essential part of our diet.

Toss them in salads and stews and enjoy the numerous health benefits of these little nutritional powerhouses!