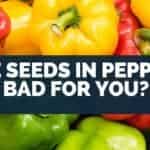 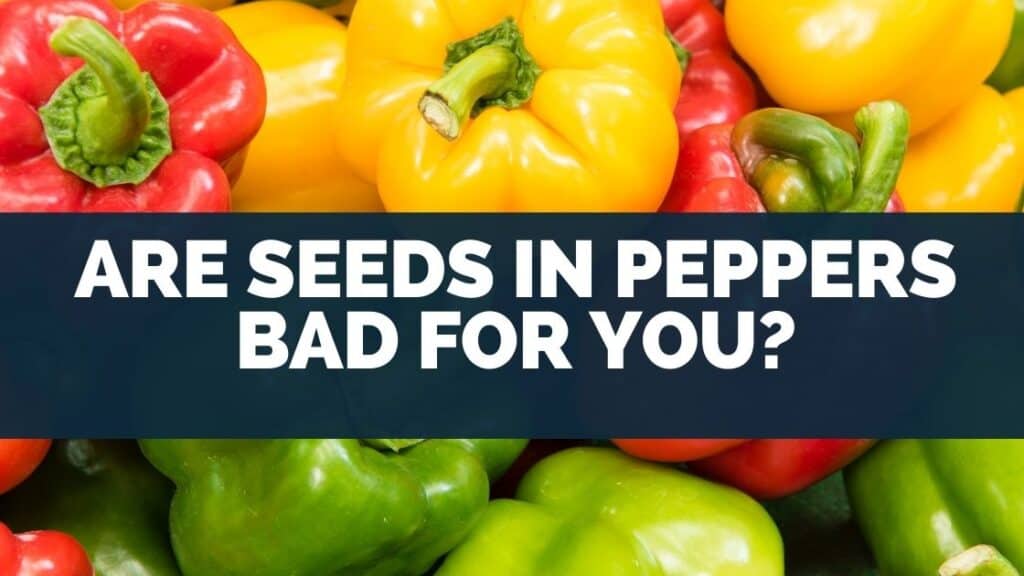 From the fiery tiny red chilies to the quintessential bell peppers, also known as capsicums, peppers have made their way into mainstream cuisine.

No longer just used for Asian or Latin American dishes, peppers are a common addition to salads, stir-fries, and sandwiches or simply as a healthier snack to dunk into a tub of hummus.

Pepper seeds can be eaten and are not toxic.

However, they have a slightly bitter taste and may hinder the texture of your dish.

They are tiny, round seeds that will not be digested by your body and pass harmlessly out.

Seeds are often thought to be the source of the pepper’s spiciness.

Capsaicin is the primary chemical in peppers that give them their infamous spice.

Capsaicin comes from the lighter-colored pith of the pepper.

The pith, also known as the ribs or veins, is the fleshy part of the fruit to which the seeds are attached.

Capsaicin has been linked to numerous health benefits such as:

Pain Management – Capsaicin is used as the main ingredient in topical ointments, patches, and gels that can help reduce pain caused by muscle aches, arthritis, and chronic injuries.

Different types of peppers have vastly different levels of capsaicin.

Bell peppers have very low levels, if at all, while a single red chili will have you sweating.

Plants developed capsaicin as an effective defense mechanism to protect themselves from predators yet spread their seeds. Most animal species are affected by spice.

Birds will happily munch on peppers, and as the tiny seeds travel through their bodies undigested, they get spread across long distances, and the plants get to proliferate generously.

These feathered carriers also swallow the peppers whole, keeping the seeds intact and allowing for germination.

Mammals and other animals that chew on seeds eliminate the possibility of germination.

In addition, capsaicin is known to be a natural insect repellent and can even repel fungi, ensuring a healthy plant.

The amount of capsaicin found in peppers dictates the degree of spice.

It is measured on a scale called SHU, or Scoville Heat Units. Wilbur Scoville developed the Scoville Scale from the United States in 1912.

The ingestion of too much capsaicin can have adverse effects such as:

Fun Fact! According to the Guinness Book of Records, the Carolina Reaper is officially the spiciest pepper in the world.

It has an astonishing 2.2 million SHU in comparison to Tobasco, which has 80,000. 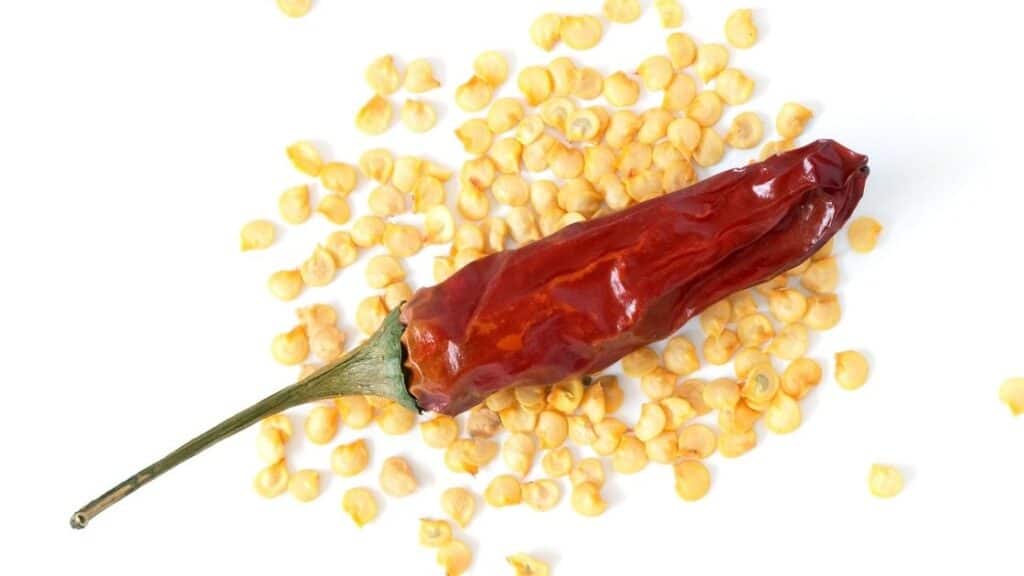 No, pepper seeds are not dangerous to ingest.

Most people eat peppers and their seeds daily with no issues.

They may taste unpleasantly bitter and be a pain to crunch into, but they pass harmlessly through our bodies.

Whether you want to spend the time to get them out before cooking is entirely a personal preference.

Bell pepper seeds are hard and can be unpleasant to bite into, especially if you use a generous amount of peppers.

In addition, they have a slightly bitter taste.

However, bell peppers are members of the nightshade family.

Nightshades are a group of fruits and vegetables that include potatoes, tomatoes, and eggplant.

Some people believe nightshade can trigger inflammatory conditions such as arthritis.

Some believe that the glycoalkaloid compound, solanine, that is present in nightshades can worsen inflammation.

While some people have reported worsening arthritis when eating nightshades, there is no scientific research to support that solanine directly affects inflammation.

In vast amounts, solanine can be poisonous, but fruits and vegetables have very little of this alkaloid in them.

Solanine poisoning can happen when you eat between two to five milligrams per kilogram of body weight.

That roughly computes to about 130 milligrams of solanine for an average 150 lb / 68 kg person.

In comparison, an eggplant has about 11 milligrams of solanine, while a potato has 25 to 275 micrograms.

Since 1 milligram is 1,000 micrograms, a potato has a maximum of 0.275 mg depending on the variety and environment. 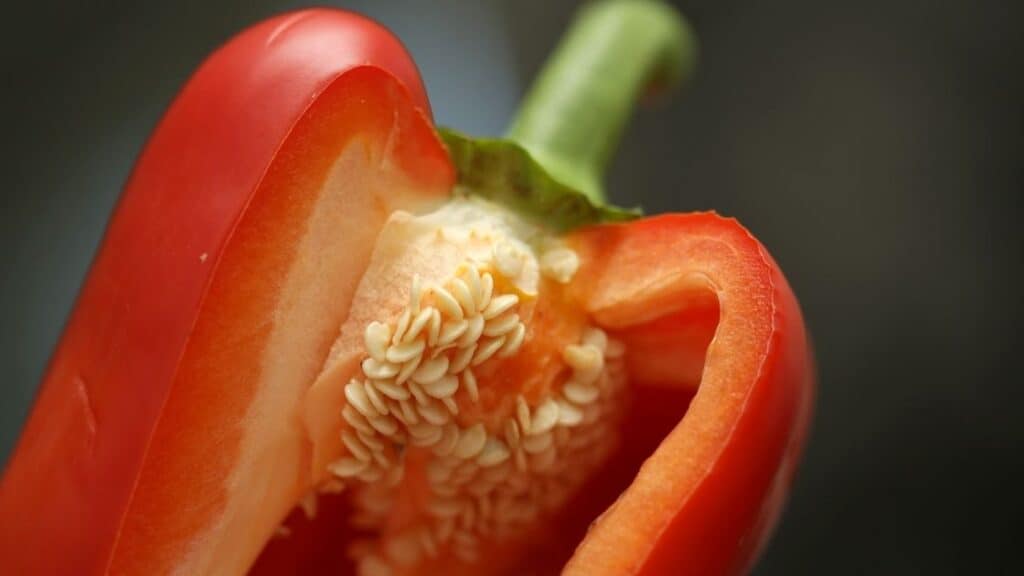 Seeds contain similar benefits to the fruit from which they come.

Bell pepper seeds are as healthy as the fruit.

However, there is no scientific evidence that bell pepper seeds add significant nutritional value to your dish.

In comparison, the flesh of bell pepper itself is packed with nutrients.

They are rich sources of fiber, vitamin A and C, folic acid, and potassium.

Red peppers are the ripest and most nutritious.

On the opposite end of the scale are green peppers that are harvested the earliest.

Unharvested green peppers first turn yellow, orange, then red, but they can also stop changing color at any time on the spectrum.

That explains the various colors available in your grocery store!

They are not a variety of bell peppers on their own.

Red peppers have more than ten times beta-carotene than the greens and 50% more vitamin C.

Beta-carotene is a red to the orange pigment found in some fruits and vegetables that our bodies convert to vitamin A.

Beta-carotene has been known to:

Fruits and vegetables rich in beta-carotene include:

What Are The Health Benefits Of Bell Pepper Seeds? 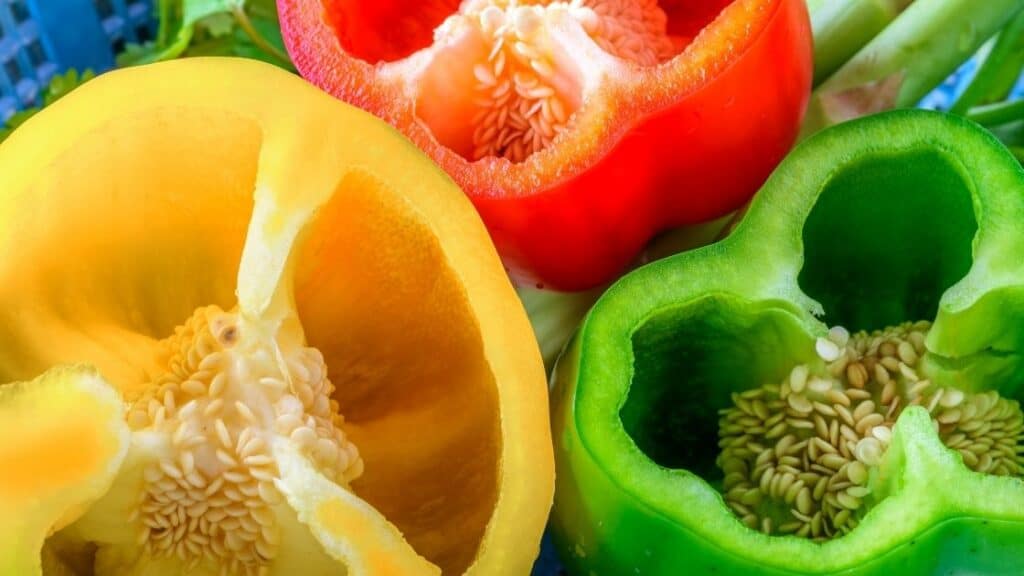 Bell pepper seeds only contain trace amounts of the nutrients already found in the bell pepper fruits themselves.

There is no scientific research proving the seeds add significantly more nutritional value as seeds often contain the benefits as the fruit itself.

Bell peppers are nutrient powerhouses that pack a punch.

They have been linked to:

Improve eye health
They contain over 30 different types of carotenoids, such as beta-carotene, lycopene, and zeaxanthin.

Carotenoids are phytonutrients that come from the bright orange and yellow pigments found in many fruits and vegetables.

Because of their ability to limit blue light from entering the eye, they have been said to help stave off eye diseases and help eyes heal.

B6 also supports melatonin production and might act as a sleep aid.

Pain relief
Capsaicin, the primary chemical found in peppers that give them their spice, has been linked to offering pain relief.

It is commonly found in topical analgesic gels for the treatment of muscle pain and arthritis.

Weight management
Capsaicin has also been linked to increased metabolic rates and is used for fat-reducing scrubs and creams.

What Is The Nutritional Value Of Bell Pepper Seeds? 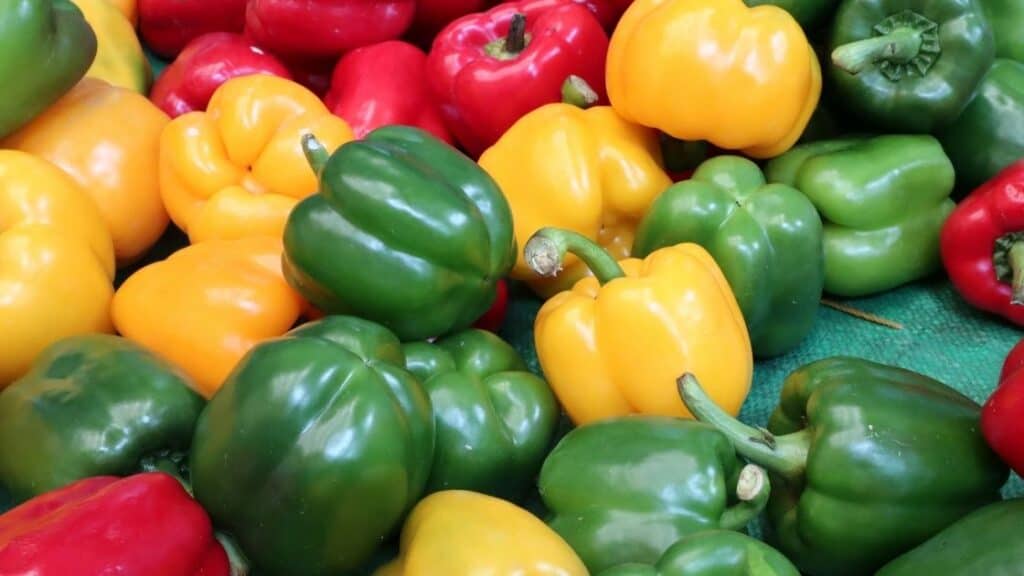 Seeds from a fruit usually have similar properties to the fruit from which they came, so to understand their value, we’ll need to look at the nutritional value of the bell pepper fruit itself.

Yes, bell peppers are surprisingly a fruit, not a vegetable!

They consist of 92% water and have small amounts of fiber, sugar, and carbohydrates.

Red peppers are the ripest and the most healthful, while green peppers are harvested the earliest and have the least nutrients.

As they ripen, they turn yellow, orange, then red.

The nutrients that bell peppers contain are: