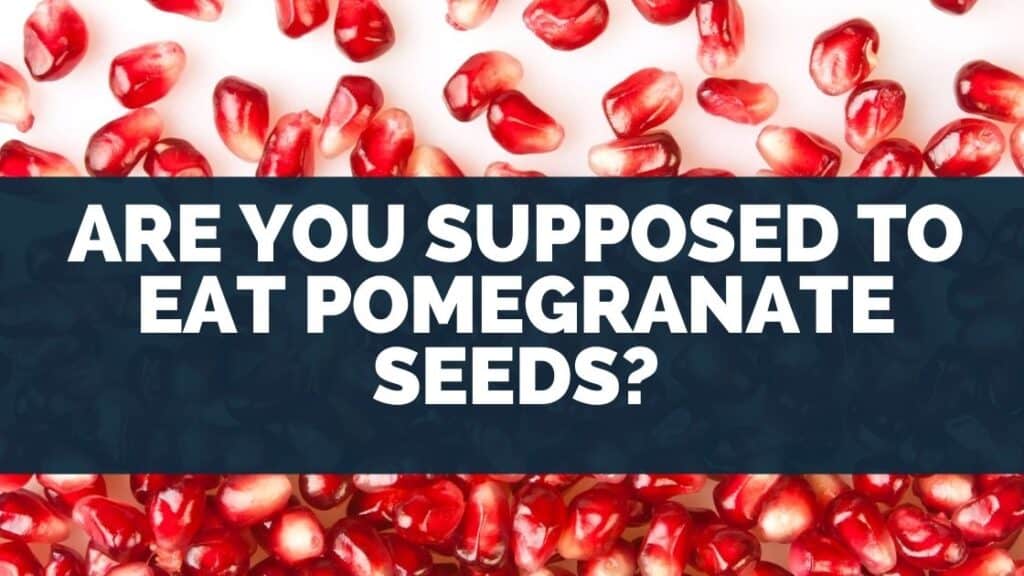 Pomegranates (Punica granatum) are delicious, nutritious fruit from a shrub from the Lythraceae family of about 620 species of herbs, trees, and shrubs.

Classified as a berry, pomegranates are red and round nutrient powerhouses.

Cut thick and inedible rind open, and you’ll find hundreds of edible seeds inside, each surrounded by a red, juicy covering known as an aril.

You are supposed to eat the seeds and arils of a pomegranate, where the nutrients are contained.

The pomegranate is one of the oldest fruits in the world, thought to be originated from Persia.

Cultivation soon spread around the Mediterranean and into China, where it was called the “Chinese apple”.

The use of pomegranates for medical purposes dates back to more than 3,000 years.

All the parts of the pomegranate plant, or punica granatum, contain unique alkaloids known as “pelletierines”.

These compounds paralyze tapeworms so they can be expelled from bodies.

In addition, the plant is rich in tannin, a group of polyphenolic molecules.

It was used for mouth sores and throat and vaginal infections.

In addition, it was thought that the plant has an active ingredient for treating aging skin.

Natural red dyes and inks can be obtained from the flowers and rind, while black ink was made from the bark. (Source)

Fast forward a few thousand years to a few hundred years ago when pomegranate was brought to the US.

Now widely cultivated in Arizona and California, pomegranates have earned their reputation as a superfood.

Promising research on the potential health benefits has led to a plethora of pomegranate supplements, juices, powders, extracts, and of course, nothing beats the fruit itself.

Nowadays, conventional grocery stores all over the nation carry an extensive range of pomegranate products.

What Are The Benefits Of Eating Pomegranate Seeds? 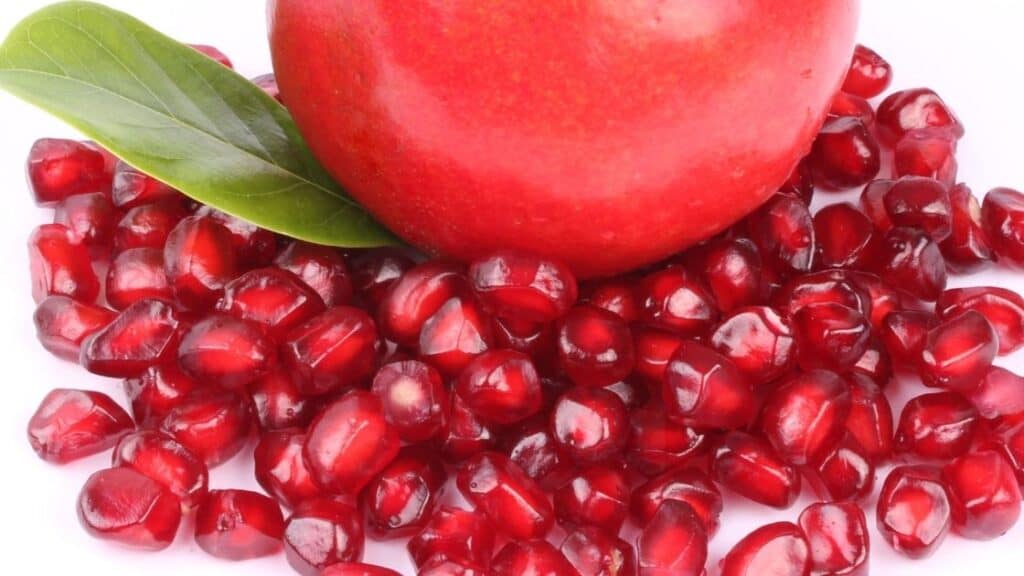 The enviable status of pomegranates as a superfood comes from the powerful antioxidants present in the fruit called polyphenols.

Two of the polyphenols, punicalagin and punicic acid, are plant-based compounds with potent medicinal benefits.

There are more than 8,000 types of polyphenols.

Punicalagins are the largest polyphenol by molecular weight and the most common polyphenol.

Together, they give pomegranates the reputation of having a host of impressive benefits.

Chronic inflammation is the primary cause of severe diseases such as type-2 diabetes, cancer, heart disease, and Alzheimer’s.

The punicic acid in pomegranates is said to reduce inflammation activity in the digestive tract and reduce breast and colon cancer cells.

Pomegranates have been known to lower systolic blood pressure, according to this review on controlled trials.

High blood pressure is one of the leading causes of heart attacks and strokes.

Traditionally used as a remedy for diabetes in India and the Middle East, the effects of pomegranates on diabetes are still relatively unknown.

However, studies have shown it may help lower blood sugar and decrease insulin resistance.

The juice is known to speed recovery and enhance athletic performance.

A common problem, particularly among seniors, arthritis is mainly the often painful inflammation of the joints.

Because of the anti-inflammatory properties of the polyphenols, pomegranates can help manage pain.

In addition, some studies suggest that the extract can block enzymes that damage joints in people with osteoarthritis.

Most of this research has been done on mice, and evidence from human tests is still limited.

Sexual Health
Oxidative stress can hinder blood flow throughout the body and has been known to cause erectile and sperm dysfunction in men.

The concentration of antioxidants in pomegranate juice has been shown to help with these conditions.

In addition, drinking pomegranate juice has also been linked to high testosterone levels in both men and women, the primary hormone behind sex drives. 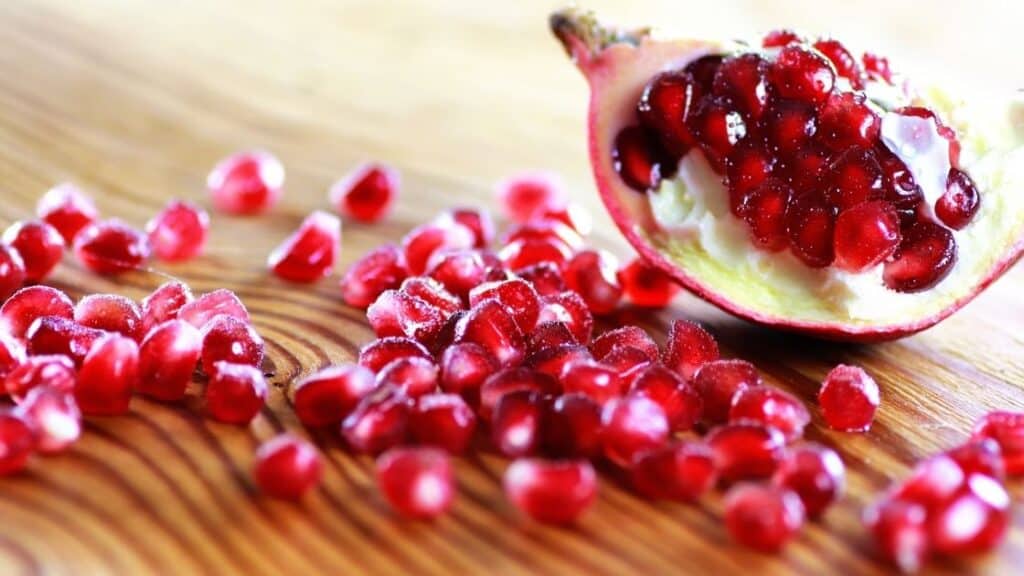 Pomegranates are a moderate caloric fruit containing 145 calories in one cup of arils and seeds.

For comparison, they sit somewhat in the middle of the spectrum, with avocados on one end at 240 calories and apples at 32 calories per apple.

A cup of arils contains 24g of sugar compared to raspberries with 5g or avocados with 1g.

According to the USDA food database, the nutritional content of a cup of pomegranates include:

Pomegranates have been known to be an excellent weight-loss aid.

Can I Freeze Pomegranate Seeds? 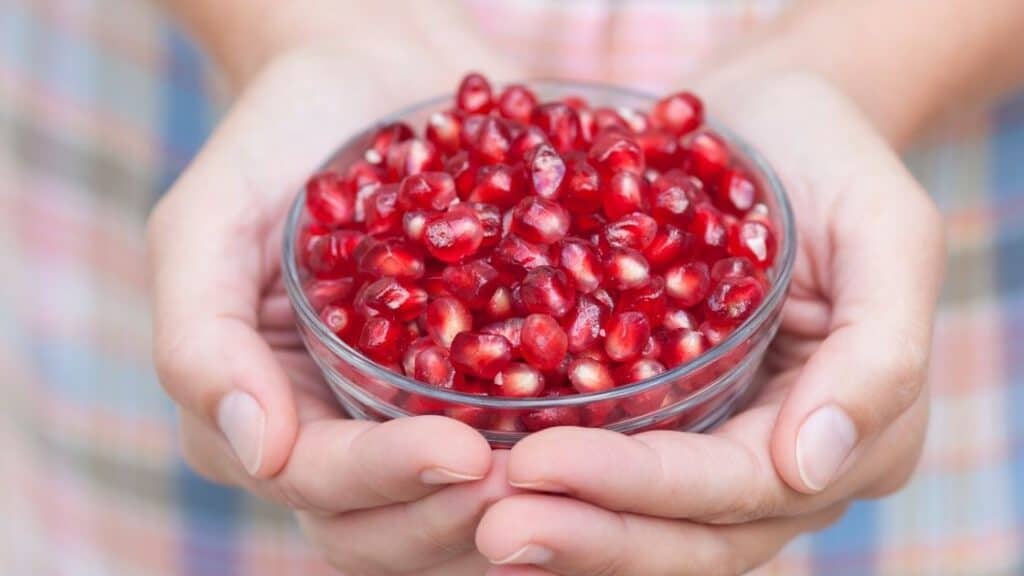 Yes, you can! Pomegranate seeds freeze well, and if frozen, well last in the freezer for up to 6 months.

In comparison, fresh or thawed seeds will last about three days in the fridge.

Frozen seeds aren’t as juicy or crunchy as fresh seeds.

It starts in September and typically ends by the new year.

To enjoy pomegranates for a longer duration, freeze the seeds and portion them for use later in salads, smoothies or to eat raw.

Pomegranates will last one or even two months if stored whole.

However, seeds will last about three days in a freezer.

An excellent way of prolonging their lifespan would be to freeze them.

The last six months without losing any nutritional value.

Here’s how to freeze pomegranate seeds.

Bonus Tip: By freezing them on the baking sheet first, you’ll be storing them individually.

When it comes time to use them, just scoop out what you need without thawing the entire bag out.

To thaw frozen pomegranate seeds out: 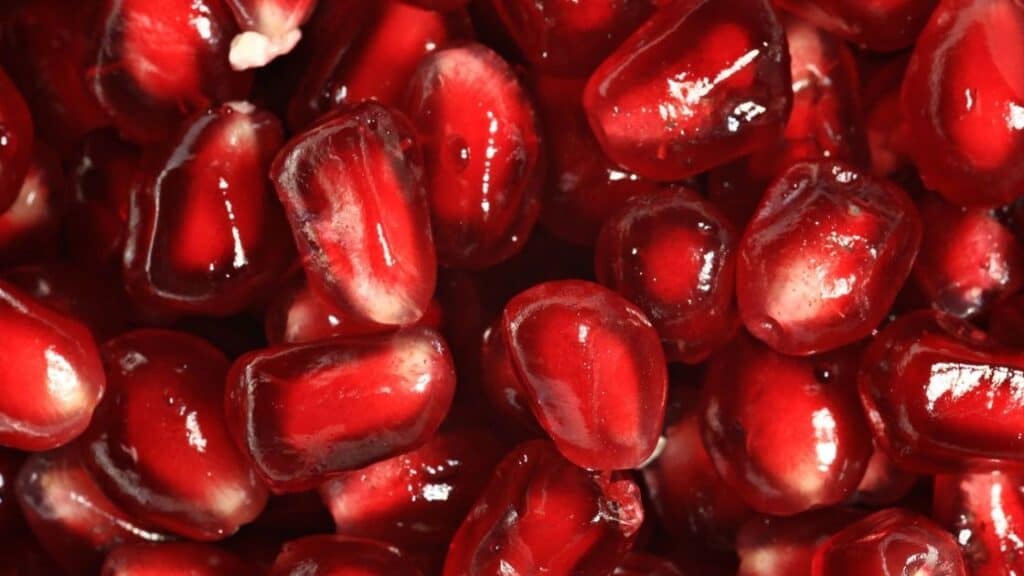 Yes, they are! They can be stored for up to 6 months without losing any nutritional value.

That way, you’ll get to enjoy pomegranate seeds throughout the year, not just the September to December season.

Frozen pomegranate seeds have many uses.

They are tiny seeds and will thaw in about 20 to 30 minutes when kept at room temperature.

Some common uses of frozen pomegranate include adding it to:

Bonus Tip: Frozen seeds aren’t as juicy or crunchy as fresh seeds and tend to be a little mushier.

Pomegranates have rightfully earned their place and label as a superfood.

We hope you get to enjoy these power-packed fruits for a long time to come and wish you the best of health!