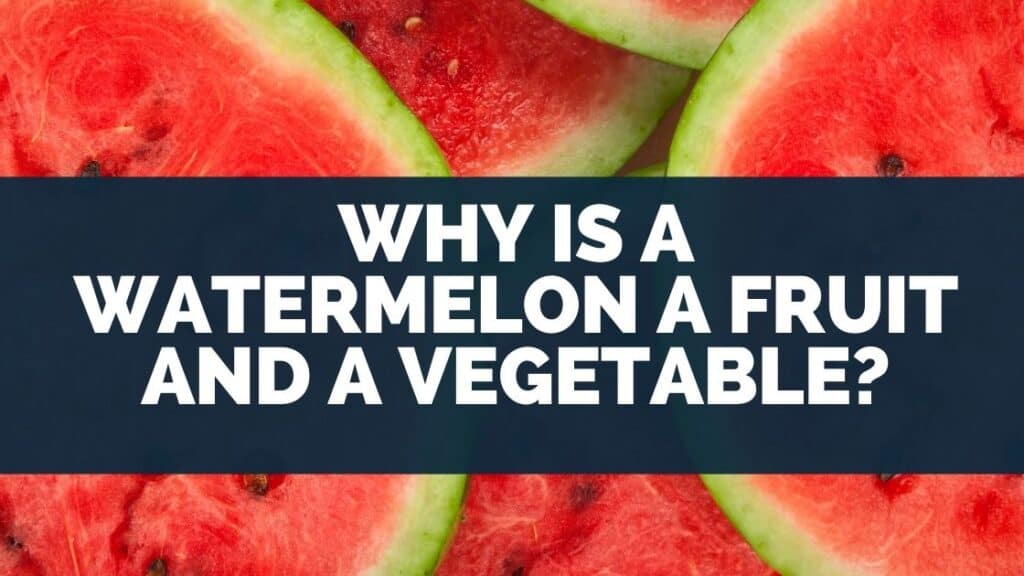 Watermelon is one of the largest fruits, and in my opinion, is one of the most delicious fruits especially when cooled in a refrigerator as a treat on a hot day.

But, what certain people believe to be vegetables are in fact fruits too so I was curious as to the distinction for watermelons

I looked into the scientific classification of watermelon and here’s what I found.

Watermelon is a fruit and is not a vegetable.

The botanical classification of fruits are the part of a plant that houses the seeds, and can be surrounded by edible and delicious flesh.

However, a vegetable is the leaves, roots, and/or stems of a plant.

For example, spinach are the leaves of the spinach plant.

And carrots are the roots of the carrot plant. Legumes such as beans or lentils are another broad category of plants and are classified as vegetables.

Legumes are the seeds of a plant.

Go to top
Table Of Contents hide
1 Watermelon Facts
2 What Are the Benefits of Eating Watermelon?
3 Side Effects of Watermelon
3.1 How much watermelon can you eat a day?
4 Is Watermelon OK To Eat Late at Night?
5 Are melons a vegetable?
6 Is watermelon a vegetable or a berry? 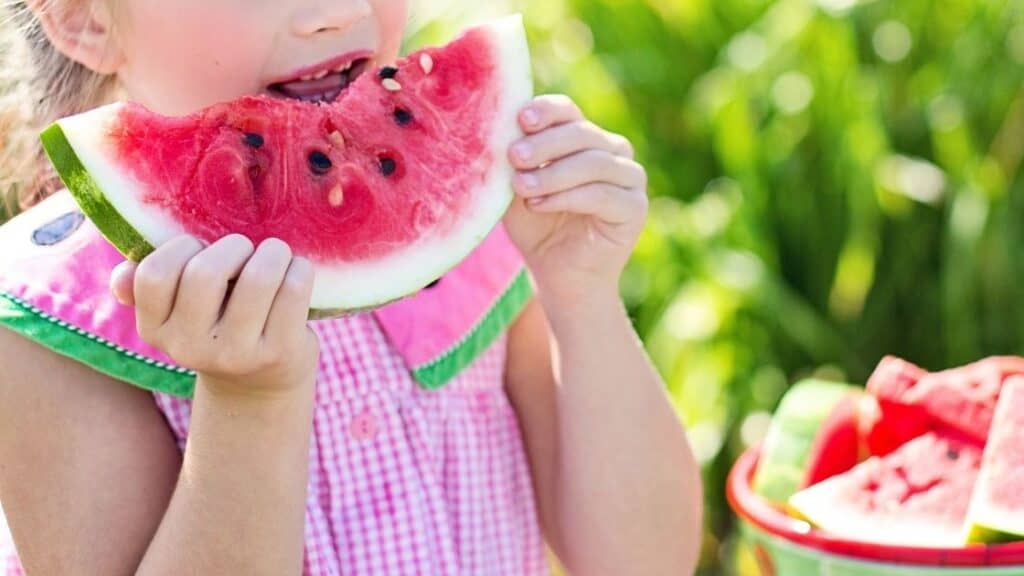 Melons and specifically watermelons are quite unique in the fruit world.

So, I looked into the facts about watermelon, where it originated and how it grows.

It is native to the African continent and grows in a vine-like fashion.

Watermelon is seen in depictions in sculptures and artwork dating back some 4,000 years.

In humid tropical climates, they can be grown year-round.

But, watermelons can also grow well in more mild climates, if grown in a greenhouse.

Generally, it’s best to grow watermelon in summertime if you live in a seasonal climate – one that has all 4 seasons.

What Are the Benefits of Eating Watermelon? 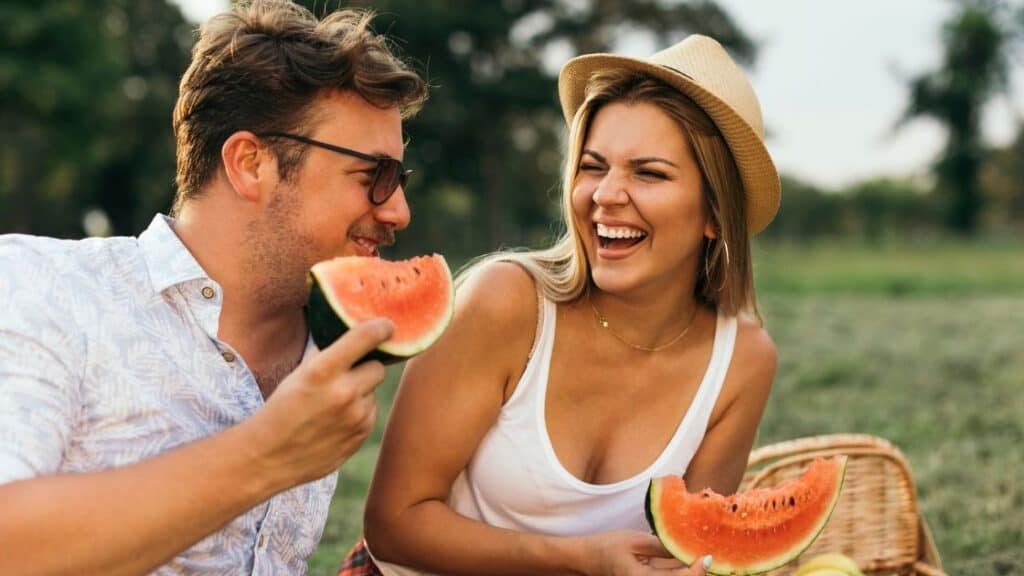 So, what are the specific benefits of eating watermelon?

Watermelon is quite high in vitamin C, vitamin A and contains around 10% of the recommended daily vitamin C and vitamin A intake per 3.4 oz (100 g or half a cup).

Other than that, watermelons are not very high in other nutrients.

Watermelons also have an anomalously low amount of fiber compared to other fruits.

Fruit juice contains around 5% of the fiber found in the actual fruit itself.

So, in my opinion, watermelon is low in fiber because it’s so juicy and watery.

And the flesh is very soft and thin.

This is easy to see when you compare the flesh of watermelon with say an orange or banana.

Though, some apples can be so juicy that they can come close to the texture of a watermelon.

But, watermelon is characteristically soft, and almost melts in your mouth.

Whereas, other common fruits like apples, oranges, and bananas require a lot of chewing before you can swallow them.

Many people wonder what fruits are the healthiest, but since there are so many it becomes difficult to compare them all.

I analyzed the nutrient contents of all the fruit and vegetables and created a list of the healthiest ones.

And summarized what I found in an article that also covers how many fruits and vegetables there are.

Read it here; how many fruits and vegetables are there?

Side Effects of Watermelon 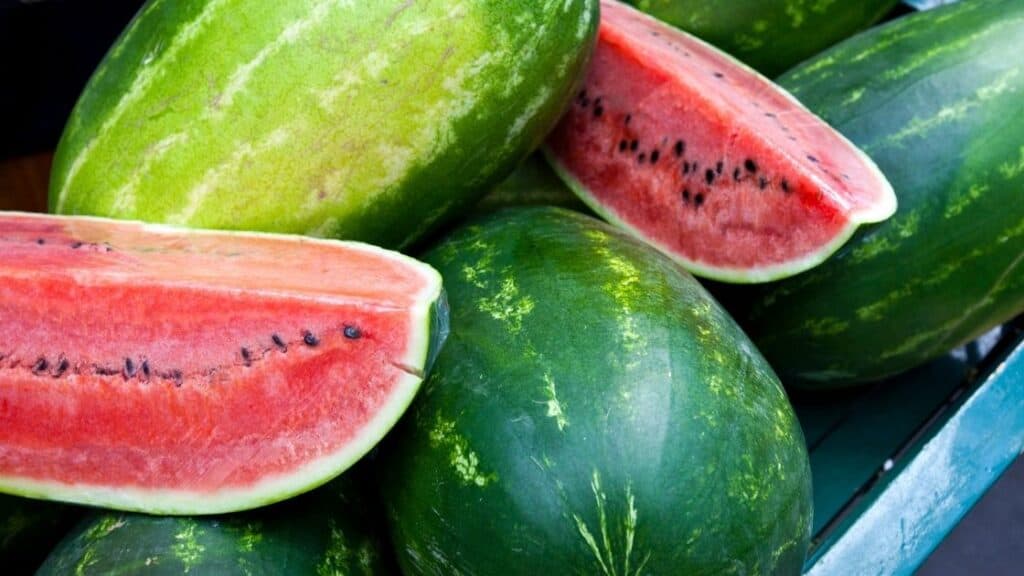 There are no known side effects to eating watermelon in moderate amounts.

But, if you consume more than around 4 cups of watermelon it can give you an upset stomach or cause diarrhea.

However, this is true of almost all fruit and is not limited to watermelon.

There is a lot you can tell about your body by the consistency of your stool – a fun topic I know!

But, if you don’t consume enough fiber and liquids your stool will become hard and can cause constipation.

But, on the flip side, if you eat too much fiber and consume too much water your stool can become soft, and watery. When you get the right amount of fiber and nutrients your stool should slide out easily, and be quite firm.

Beetroot is a known example that will change the color of your urine, but with watermelon, there aren’t any known quirks or side effects that are specific to watermelon. And is caused by not eating a wide range of foods.

How much watermelon can you eat a day?

It’s generally recommended that you eat a wide variety of foods. And for that reason around 1 cup (8 oz or 250g) per day, every day is fine.

On rare occasions, if you consume more watermelon it’s fine.

Watermelon contains about 100 calories per cup.  Therefore, if you eat more than that it will mean you’ll eat less of other foods.

And as a result, your diet won’t be as varied and it’s possible you won’t get the nutrients you need.

Is Watermelon OK To Eat Late at Night? 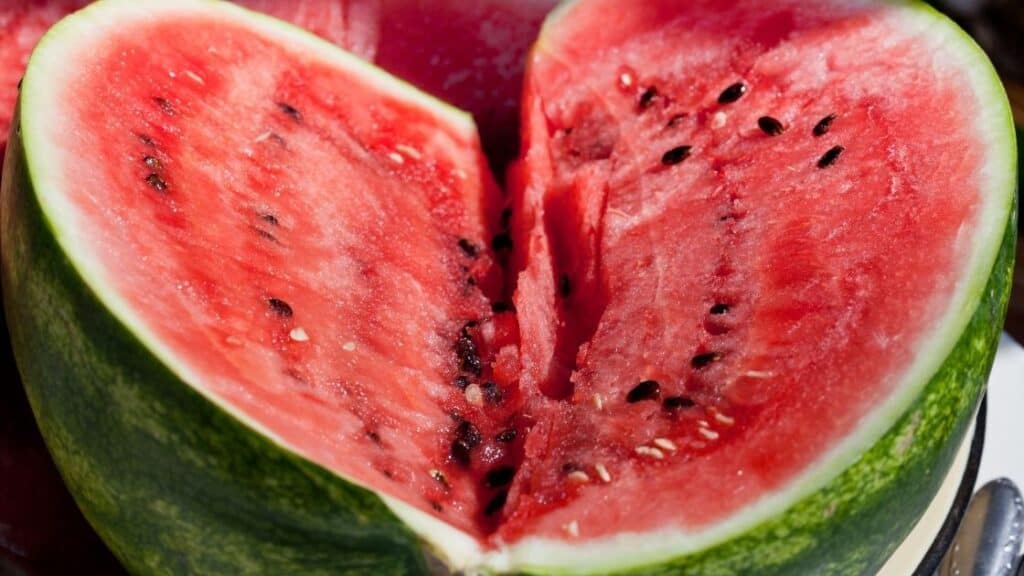 Fruits can spike blood sugar and may make it difficult to sleep.

So, I was curious whether it’s ok to eat watermelon at night. Here’s what I found.

Watermelon is ok to eat late at night. It has a high glycemic index which can spike blood sugar.

But, it has a low glycemic load, which means the sugar isn’t readily absorbed into the bloodstream.

However, each person’s body is different, so it can affect each individual differently.

Eating food right before bed isn’t recommended, and it’s generally believed that your body will continue to digest food as you sleep, which can tire out your body.

But, eating watermelon or other fruits at night isn’t nearly as bad as eating a very sugary dessert or snack, or a heavy meal right before bed.

As fruit is quite easy for the body to digest.

This is easy to see when you attempt to dissolve meat or fruit in weak acid.

The fruit will break down much faster than the meat which is very tough and difficult to break down.

Sugary snacks will generally really spike your blood sugar which can make it hard to sleep.

However, YOUR body might react badly if you eat watermelon late at night, so it’s best to try it to see how you feel.

But overall, it’s generally advised not to eat anything 1 to 2 hours before you plan to go to sleep, to give your body time to digest any food you eat.

Are melons a vegetable? 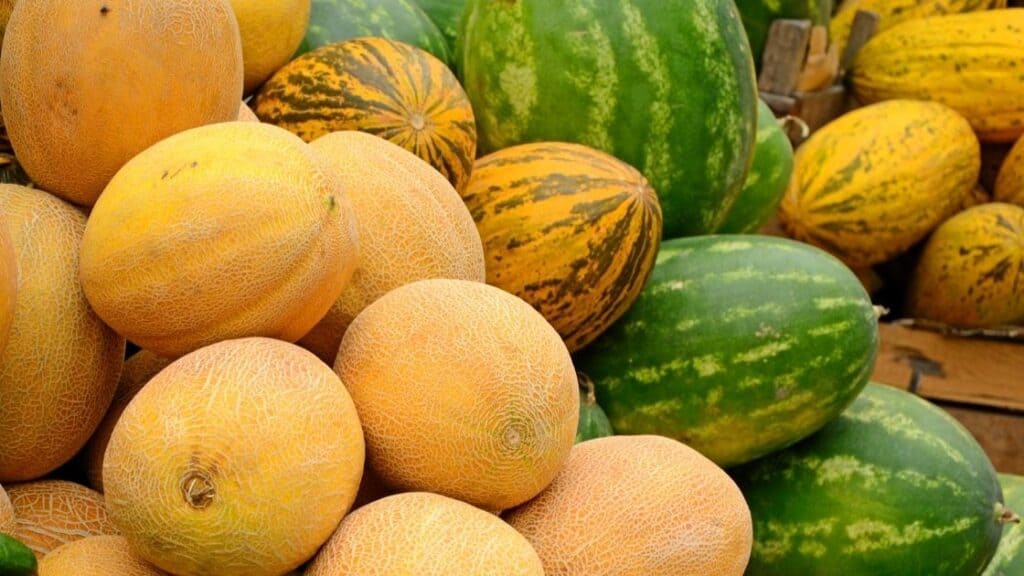 But, are all melons vegetables, or fruits.

All melons by scientific classification are fruits.

A fruit contains the seeds of the plant, and also incentivizes animals and bugs to eat it, and disperses the seeds.

Vegetables by comparison generally flower and then produce seeds without any fruit.

There are vegetables that will produce berries when they go to seed, but the berries can be bad tasting, or otherwise poisonous.

For example, asparagus – which is a vegetable – produces small toxic berries when it goes to seed.

The major difference between fruits and vegetables though is the part of the plant that you eat.

With vegetables, you don’t generally eat the fruit or seeds and instead eat the leaves, stems, and roots.

The one exception are legumes.

Which are classified as a vegetable, A legume like a kidney bean is the seed of the plant.

Rather than the flesh, stems, leaves, or roots.

Is watermelon a vegetable or a berry? 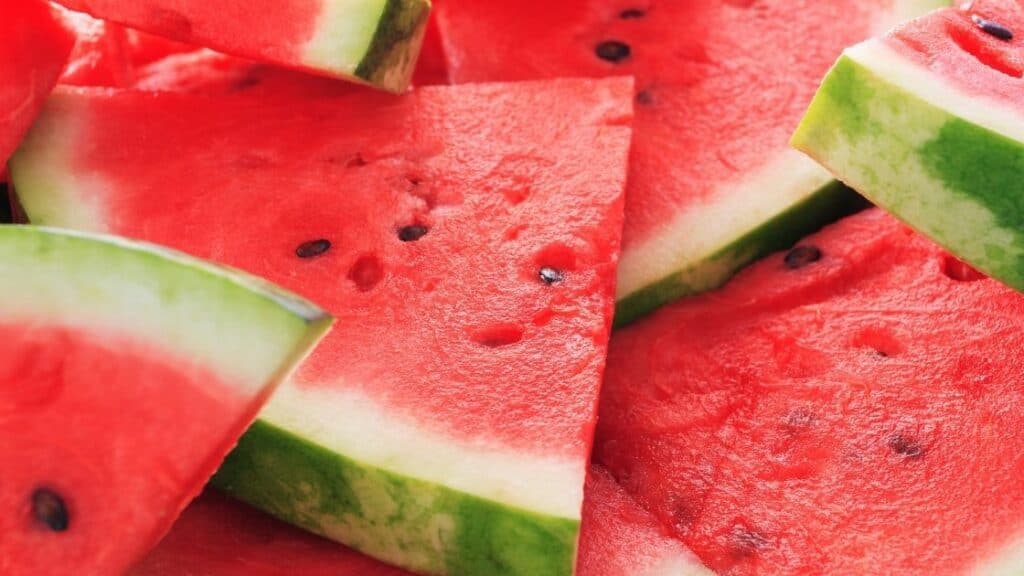 What most people call fruits, vegetables, and berries is often different to their scientific classification.

And so from a botanical perspective is watermelon a vegetable or a berry.

Watermelon botanically is a berry. However, most people do not call it a berry, instead call it a fruit.

Watermelon is not a vegetable and is indeed a fruit.

Watermelons and pumpkins are some of the largest fruits.

And you may have seen pumpkin and watermelon growing competitions where they can grow to incredible sizes.

But, it’s generally impractical to grow watermelons that large as even a normal-sized watermelon is a bit of a chore to lug around.

Berries by their botanical definition grow in many different ways.

For example, bananas grow on a tree-like plant, whereas watermelons grow outwards and creep like a vine along the ground.

Other common berries like blackberries grow as a thick bush but will also grow along a trellis where it can be easier to harvest.