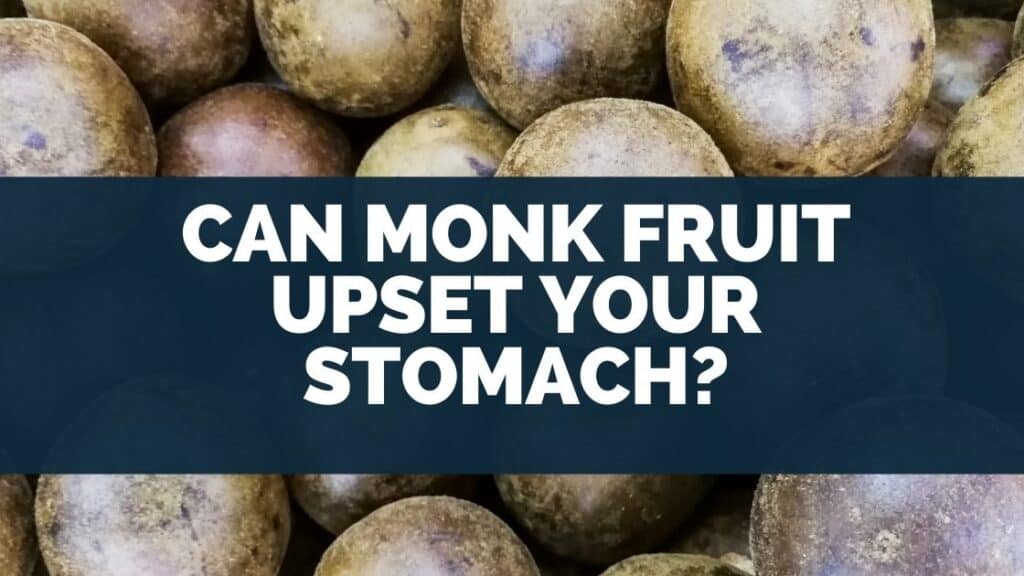 Monk fruit is a popular sweetener native to southeast Asia; it’s up to 200 times sweeter than regular table sugar but doesn’t contain any calories or carbohydrates.

However, some people report digestive issues, such as diarrhea and bloating after consuming it.

Can monk fruit upset your stomach?

However, given its extreme sweetness, manufacturers dilute it with artificial sweeteners, such as xylitol or organic sugar alcohols like maltitol to reduce its intensity.

These additives are less digestive-friendly and can cause stomach discomfort.

In this article, you’ll learn more about monk fruit and whether it causes stomach issues.

We’ll also talk about its health benefits and how it differs from other sweeteners.

What Is Monk Fruit? 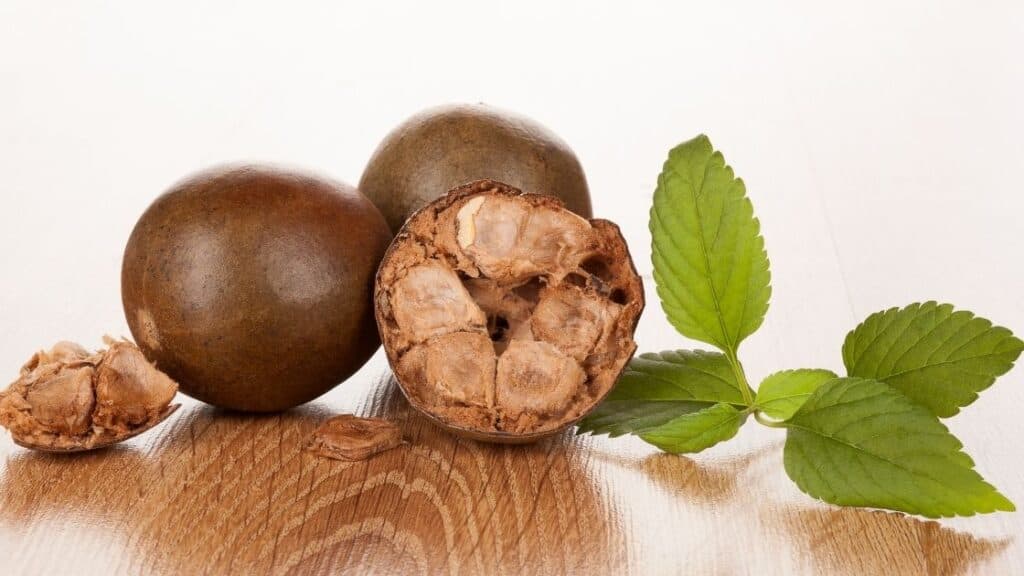 Monk fruit, also known as Luo Han Guo, is a small, round melon native to Southern China and northern Thailand that’s roughly the size of a walnut.

Asians collect the sweetener by peeling its skin and removing the seeds, then crush the fruit and turn it into a concentrated powder.

After the fruit ripens, it ferments and rots quickly.

It’s also expensive to import since it’s hard to grow, harvest, and dry, which is why it’s almost impossible to find fresh monk fruit unless you visit a region where it’s cultivated.

Natives often dry the fruit and use the powder in foods or tea as a sweetener or traditional Chinese medicine.

The extract has no calories, carbohydrates, and fat, although it’s extremely sweet—around 200 times sweeter than standard table sugar, so it’s an ideal sugar alternative for people watching their weight.

It’s also heat-stable, so you can use it in baking, cooking, coffee, sauces, frosting, and more.

Allergic reactions to monk fruit are rare but still can happen.

The fruit belongs to the gourd family, which includes cucumber, pumpkin, and melons.

The risk of monk fruit allergy is higher if you show an allergic reaction to other gourd family members, which include rapid or weak pulse, dizziness, stomach pain, and vomiting.

How Monk Fruit Can Upset Your Stomach?

Some people seem to think that monk fruit upsets their stomachs and causes diarrhea or bloating, but the real cause isn’t monk fruit.

Since monk fruit is intensely sweeter than sugar, manufacturers dilute it with less sweet ingredients, such as maltodextrin and erythritol, which don’t absorb water in the small intestines and could cause diarrhea.

Gut bacteria cannot ferment these artificial substances, so it’s better only to consume pure monk fruit as a sweetener to avoid upsetting your stomach.

How Safe Is Monk Fruit? 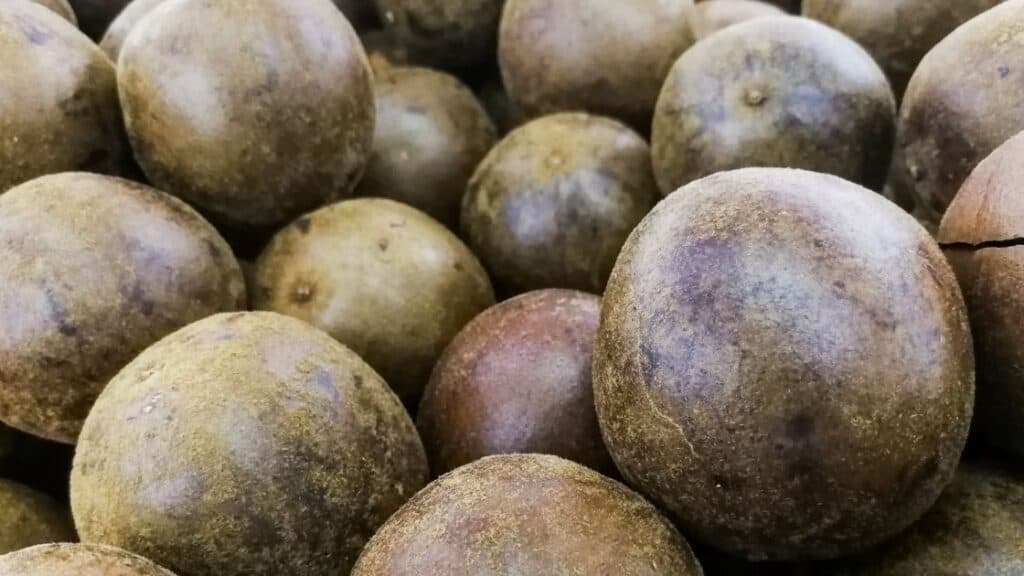 Monk fruit is generally safe and healthy for everyone, including pregnant and breastfeeding women and children, according to the Food and Drug Administration (FDA).

It has no known side effects and is categorized as a non-nutritive sweetener, meaning that it has no significant nutritional effect.

Unlike sugar, it won’t boost your energy levels or give you a sense of high once you consume it.

A panel of experts conducted a 90-day study to see how monk fruit affected rats’ reproduction and development.

According to the results, monk fruit wasn’t toxic to the rats.

However, there weren’t any scientific studies that examined the long-term effects of the fruit on the human body. 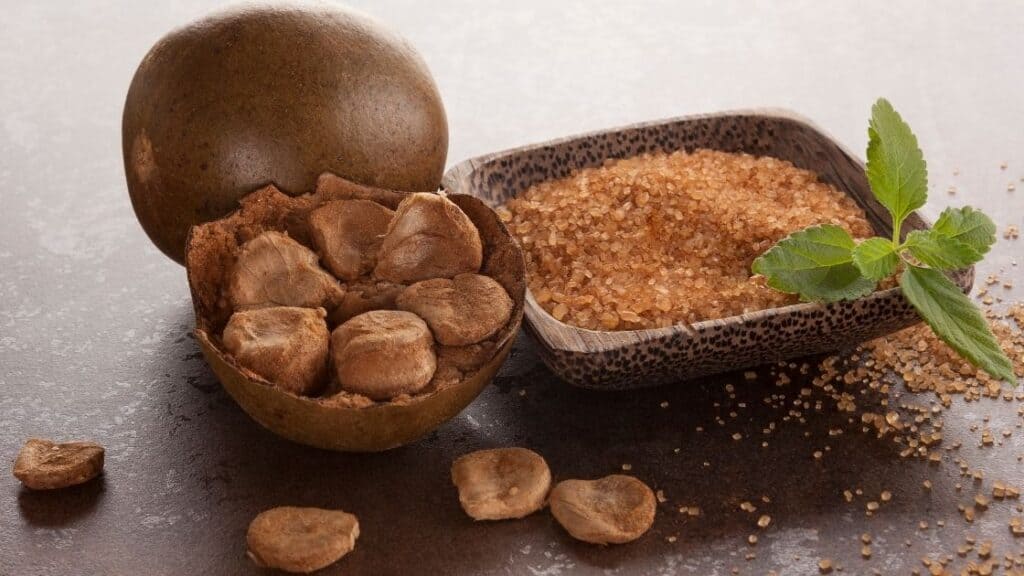 Monk fruit is recognized as generally safe, but does it have any health benefits? Let’s take a closer look at some of the benefits you’ll experience  when consuming monk fruit extract:

What Is the Difference Between Monk Fruit and Xylitol? 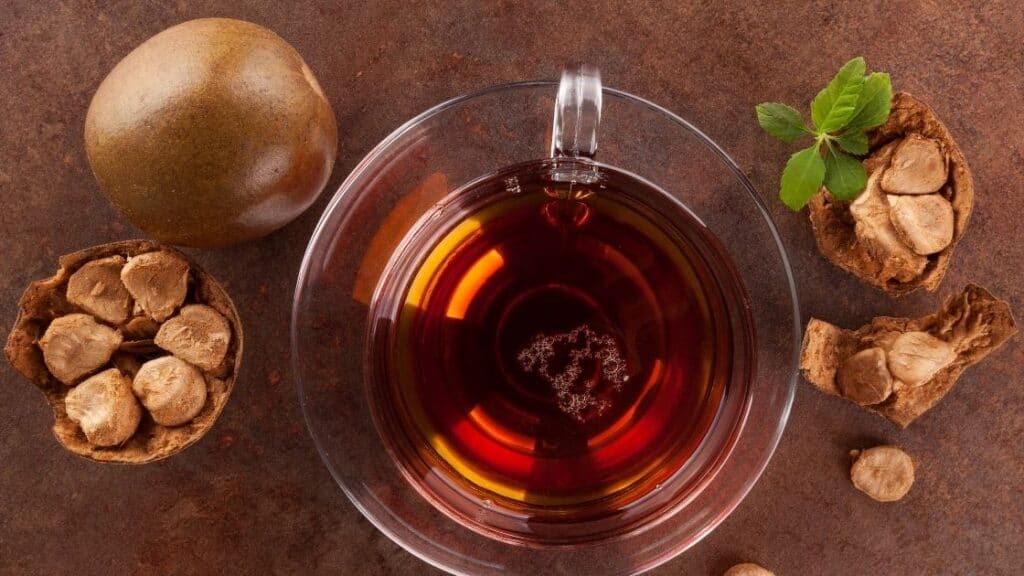 Monk fruit and xylitol are two popular sweeteners, but they belong to two different categories of sweeteners, with very different properties.

You can easily find xylitol products in your local supermarkets.

Unfortunately, that’s not the case for monk fruit.

Since xylitol is a sugar alcohol, people might find its taste more natural than monk fruit, as sugar alcohols are derived from sugar.

They don’t contain alcohol, making them suitable for alcohol-averse consumers.

Compared to sugar, they have about half the calories (about 2.6 calories per gram), but sugar alcohols, including xylitol, are more likely to cause digestive issues.

Artificial sweeteners, on the other hand, are created through chemical processes, and are sweeter than sugar but contain almost zero calories.

Saccharin and aspartame, as well as other artificial sweeteners, belong to this group and are not fit for human consumption.

However, plant extracts are all-natural and do not belong to either group.

Stevia and Monk Fruit are all-natural plant extracts that have zero calories but are safer to use than artificial sweeteners.

FDA approves both sweeteners, meaning they’re safe for all people.

Whether you choose monk fruit or xylitol is a matter of personal preference based on taste, availability, and cost.

Keep reading if you’re interested in learning more about Xylitol and how it affects the body. 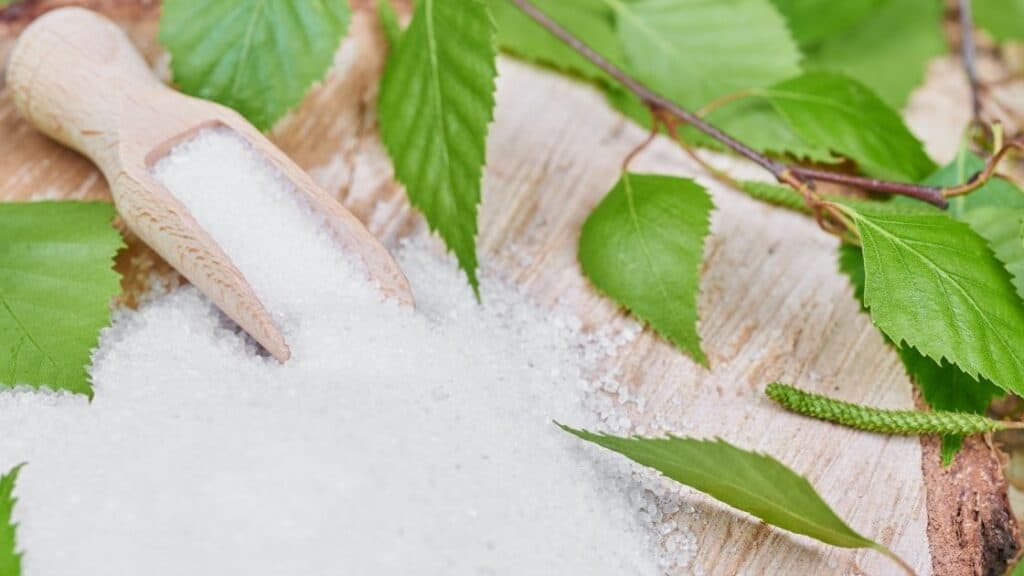 Xylitol is not dangerous to humans and is a common sugar alcohol found in most plants, including many fruits, vegetables, and even the human body.

It’s used in many items, such as sugar-free chewing gum, dental care products, mints, and candies.

Keep in mind that xylitol is very toxic to dogs and can cause liver failure or even death, so be careful with this if you have pups at home.

Here’s a quick overview of the positive and negative effects of xylitol:

Can Unripe Fruit Upset Your Stomach? 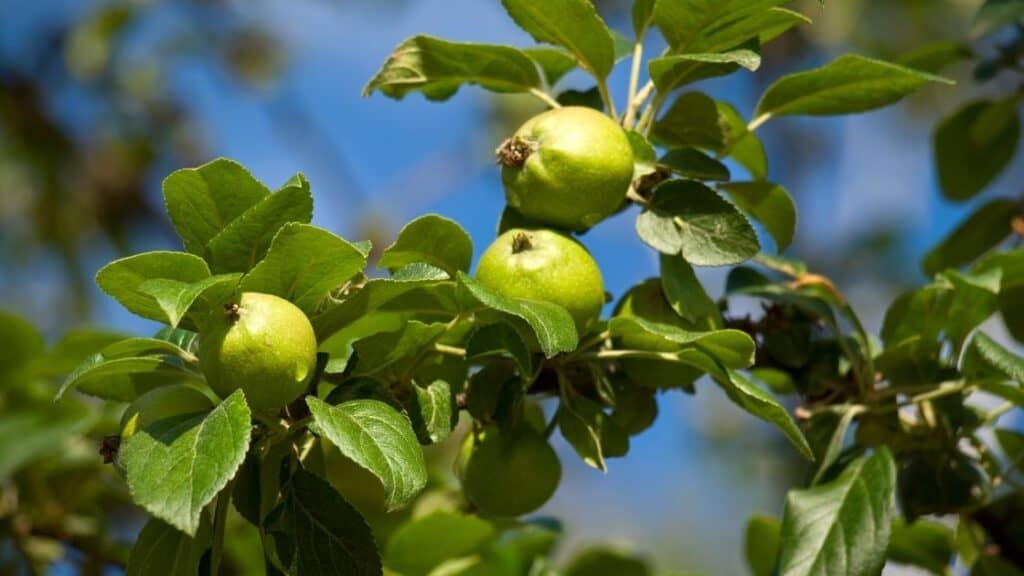 We all hear that fruits and vegetables are healthy to eat, but that’s only half of the truth because you can’t eat all fruits the same way.

Unripe fruit can upset your stomach if you eat them too soon because they are hard to digest.

This is due to the complex forms of carbs, sugar, and starch.

Unripe fruits have different effects on the body.

For example, an unripe peach or berry is hard to chew and digest, while unripe pineapple may cause throat irritation and have a strong laxative effect; it can also be toxic.

Some fruits, such as unripe tomatoes, are mildly toxic and you might get headaches or a stomachache.

Monk fruit is a subtropical fruit mainly grown in Southeast Asia, which is usually used in dried form.

It is also a popular sugar substitute because it has zero calories and carbohydrates, which is why it’s ideal for people with diabetes or obesity.

Sugar alcohol is another sweetener type, and it’s less sweet than sugar that exists in many plants.

Xylitol is the most common sugar alcohol that’s used in many items such as oral care products, chewing gums, and candies.

Unlike monk fruits, sugar alcohol may cause stomach upset and bloating in some people.