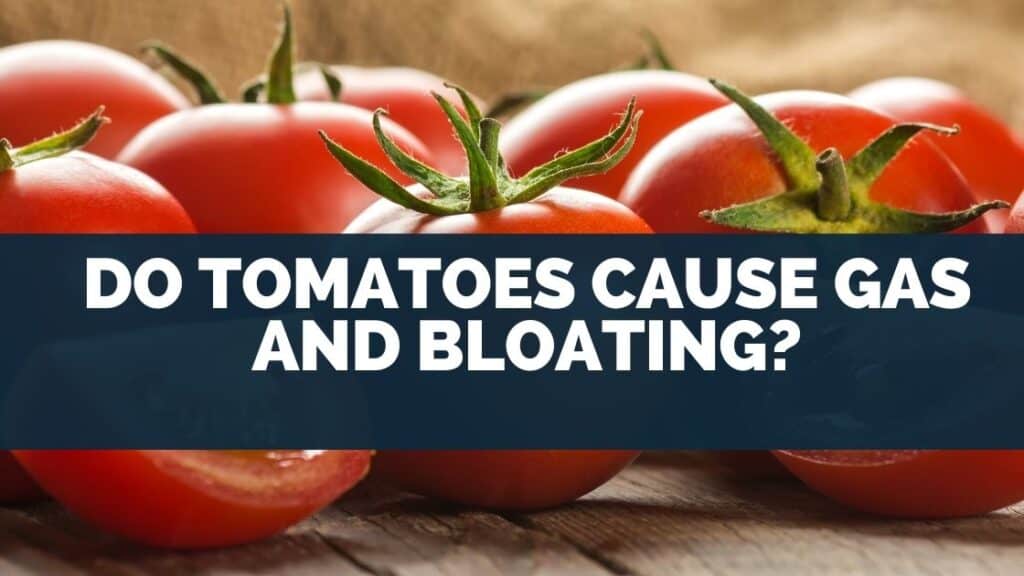 Some foods can cause bloating and gas more than others for most people.

However, if you’re experiencing gas and bloating from tomatoes you may be curious whether it’s possible that they can cause it.

In this article, I will explain whether they do or not.

There is a subset of people that do get gas and bloating from eating tomatoes.

Whereas, the vast majority of people do not.

There are other causes of gas and bloating such as consuming food too quickly which causes you to swallow a lot of air, or when tomatoes are combined with other foods.

Therefore, it requires a bit of experimentation with your diet to find out if it is indeed the tomatoes that are causing the issue.

However, it’s clear that some people do get gas and bloating directly from eating tomatoes and sometimes other fruits and vegetables in the nightshade family such as eggplants, and peppers.

Below, I will explain whether tomatoes cause diarrhea if it’s bad to eat a large number of tomatoes.

Go to top
Table Of Contents show
1 What Happens if You Eat a Lot of Tomatoes?
1.1 Why tomatoes can cause gas and bloating?
2 Why Does Tomatoes Give Me Diarrhea?
3 Do Tomatoes Make You Poop?

What Happens if You Eat a Lot of Tomatoes?

Any food in excess generally isn’t very appetizing after a typical-sized serving.

However, tomatoes are quite versatile and can be used in a range of dishes.

So, you may eat them more than once a day, or be interested in whether there are any effects from eating a lot of tomatoes.

If you consume more than the recommended daily intake of vitamin C it has a laxative effect.

In simple terms, you will need to rush to the bathroom.

And instead of a normal stool, it will be very runny. You will also need to go to the bathroom multiple times within a few hours.

When you get the sensation of needing to go to the bathroom, you generally have a very short window before you won’t be able to hold it in.

Another way this can happen is if you drink a lot of tomato juice in a day.

The amount of tomato juice that would cause you to go over the recommended daily intake of vitamin C is  ¼ gallon (1 liter).

However, some people get diarrhea from a smaller amount of vitamin C.

I, for example, tend to get diarrhea if I consume more than ⅛ gallon (500 mL) of tomato juice, or other freshly squeezed juices or smoothies very quickly.

Such as, if I’m really thirsty and fresh raw juice, or a smoothie instead of water.

This causes me to consume it very quickly which brings on diarrhea.

However, everyone reacts differently and it also depends on the other foods you consume.

Why tomatoes can cause gas and bloating?

Some people have reactions to certain foods, that are a result of their genetics.

Whereas, some foods such as beans, and prunes give almost everyone a lot of gas.

Tomatoes are less likely to cause gas and bloating for most people.

However, it is definitely a known phenomenon, and people do definitely experience an upset stomach, acid reflux, gas, and/or bloating from tomatoes.

Similar to how some people are gluten intolerant or are allergic to peanuts, or soy.

So, it is definitely something to try.

It’s also a very good idea to try combining tomatoes with other foods and keeping what is called a food diary.

Where for a week to a month you record what you eat, and describe how you feel after each meal.

Often, in day-to-day life it’s difficult to know exactly what is causing gas or bloating without recording everything you consume for a considerable length of time.

Once you have this data you can make adjustments to your diet.

For example, you can eat tomatoes with different kinds of foods to see if it’s the combination of certain foods that causes the issue.

Or, whether it’s the tomatoes that are consistently causing you to get gas and bloating.

Another thing you could try is green tomatoes.

Here’s a interesting video from a doctor about what causes bloating:

Why Does Tomatoes Give Me Diarrhea? 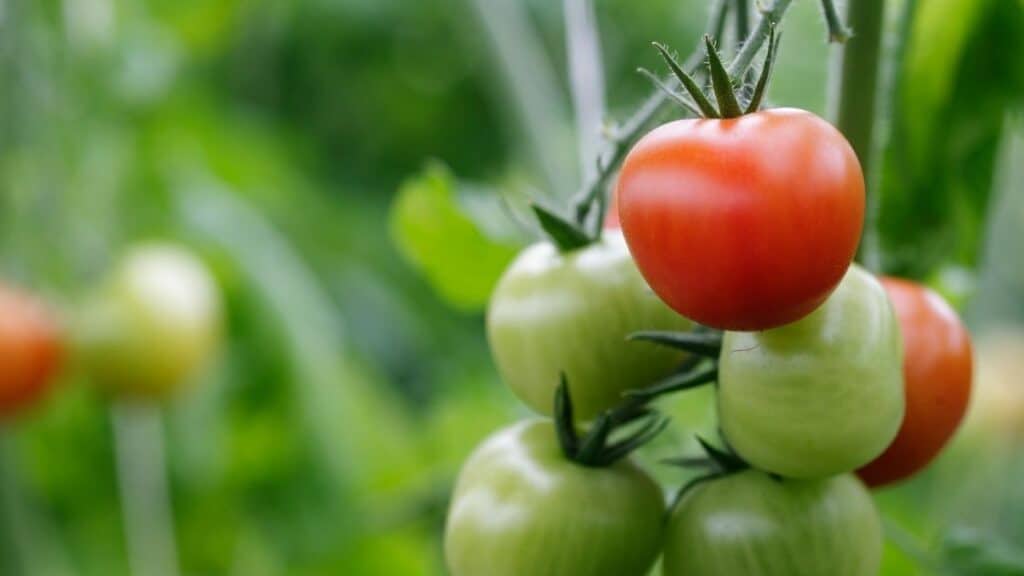 Most people can consume tomatoes without any issues.

If you have a bad reaction to tomatoes such as bloating, gas, or diarrhea it’s typically caused for the following reasons.

Some people have food intolerances, and if tomatoes give you diarrhea you may be allergic to them.

Tomatoes are also quite high in vitamin C.

If you consume a diet that is high in vitamin C, the additional vitamin C in tomatoes can give you diarrhea.

Foods that are high in vitamin C are citrus fruits such as oranges, kiwifruits, bell peppers, and guavas.

Here’s a list provided by MyFoodData of the 10 foods with the most vitamin C.

If you get diarrhea a lot you should look at the vitamin C content of the other foods you usually consume.

As it’s likely you’re going over the recommended daily intake of vitamin C.

Because this is the main nutrient that tomatoes are high in.

All the other nutrients are in fairly low amounts that it’s virtually impossible for diarrhea you get from eating tomatoes to be caused by that.

The other reason is if you have an intolerance to tomatoes which is genetic.

Most people don’t have this but people definitely do have it.

This can be proven by the fact that tomatoes are one of the most consumed vegetables in the USA, according to data compiled by the USDA.

If it’s not excess vitamin C, then it’s likely you’re allergic or have an intolerance and you should avoid eating them.

But, you can also experiment with different varieties of tomatoes such as heirloom tomatoes, grape tomatoes, or cherry tomatoes to see if one or some of these are more agreeable to your digestion.

Another issue you may notice is if you have undigested tomato in the – ahem – toilet bowl after you go to the bathroom.

I explained what causes this and if it’s an issue in this article about undigested tomatoes in stool .

Do Tomatoes Make You Poop? 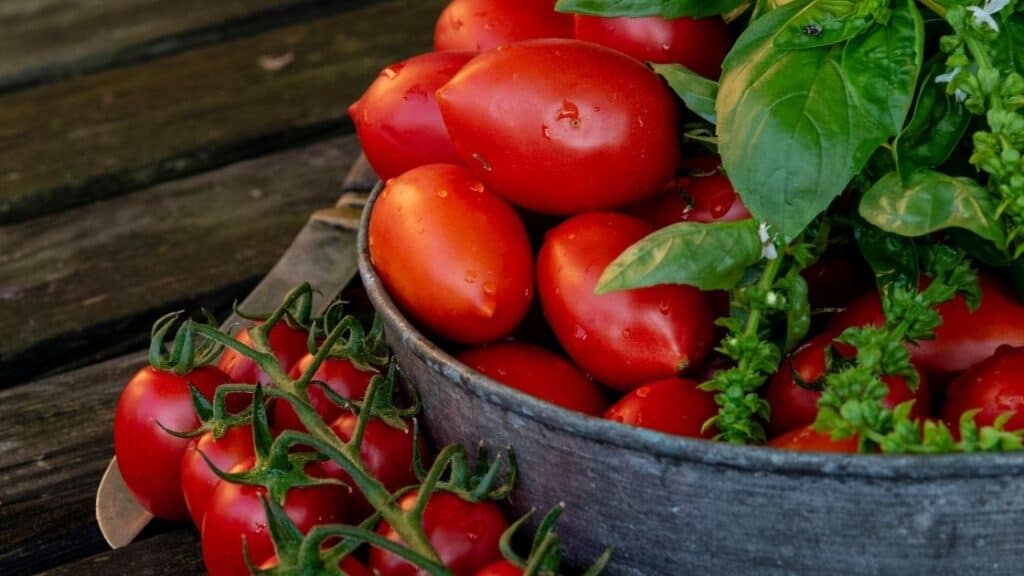 Certain foods are good for your digestive system and can be good for maintaining healthy bowel movements.

Often cited examples are foods that are high in fiber.

But, do tomatoes make you poop?

Tomatoes don’t make you poop more than other fruits and vegetables provided you aren’t allergic to tomatoes.

A small percentage of people have an intolerance to tomatoes, which causes bloating, gas, stomach discomfort, or diarrhea.

Tomatoes are also particularly high in vitamin C, which when consumed in large amounts (over 5 cups per day) has a laxative effect.

Fruits and vegetables are for the most part high in fiber, which makes them very good at maintaining healthy bowel function.

This makes them good for passing hard and stuck poop when you have constipation, and returning your stool to normal if you accidentally didn’t consume enough water, or didn’t eat enough fiber for a day or two.