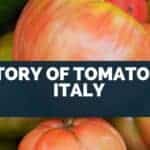 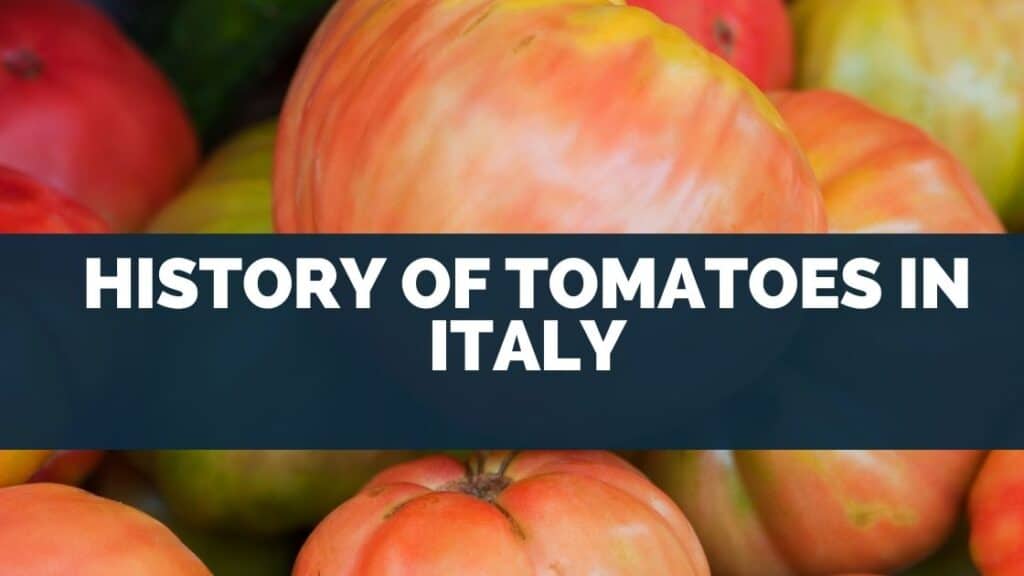 Tomatoes are a big part of Italian cuisine, it’s a well-known tradition in Italy to turn plum tomatoes into strained tomatoes in bulk, and then add it to recipes.

Tomatoes are also one of the most consumed fruits (often called a vegetable) in the USA and are very popular worldwide so today I will explain the history of tomatoes in Italy.

Tomatoes are reported by historians to have arrived in Italy from the Americas.

When tomatoes first arrived in Europe and Italy vegetables were considered bad for your health.

There is quite a good written record of how tomatoes arrived in Italy and Europe.

So below, I will explain when tomatoes first arrived in Italy, what people in the Italian region ate before tomatoes arrived, and when pasta was first invented or came to Italy.

Go to top
Table Of Contents show
1 When Did Tomatoes First Come To Italy?
1.1 Spanish explorers/conquerors introduced to tomatoes in the Americas
1.2 Old Italian naming of tomato dishes shows Spanish influence
2 What Did Italy Eat before Tomatoes?
3 When Did Pasta Come To Italy?

When Did Tomatoes First Come To Italy? 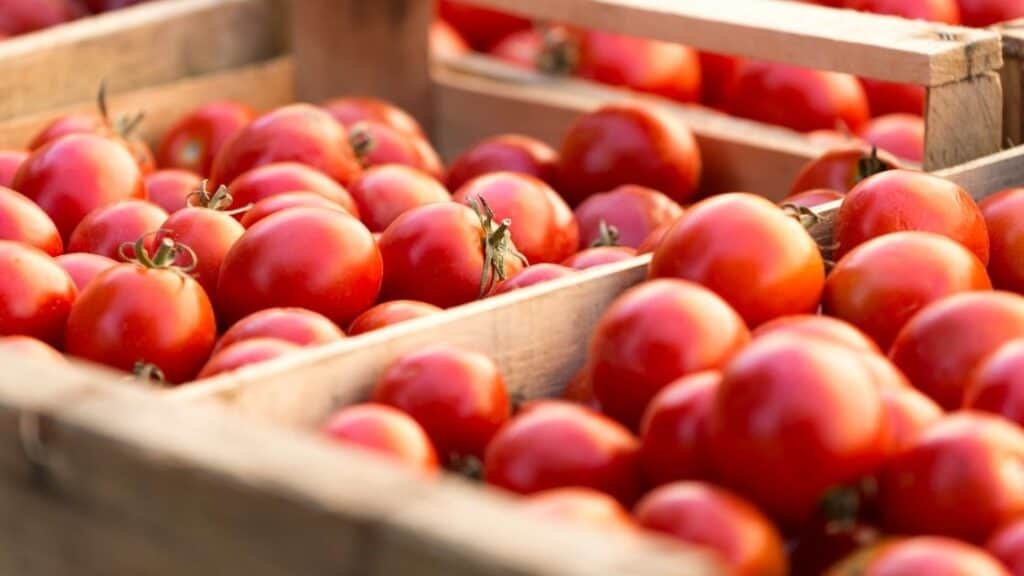 The history of events was written in books, and books by their nature will degrade and become unreadable over time.

Therefore, it’s impossible to say for 100% certainty what occurred in the past.

But, luckily many very old books were preserved and so here’s a brief explanation of when tomatoes first came to Italy.

The first recorded history of tomatoes in Italy is in 1548.

But, it’s likely they were in Italy before then as tomatoes are recorded to have arrived in Europe from the Americas (North, South, and Central) in 1521.

Tomatoes are thought to be native to South America.

The reason that tomatoes are thought to have originated in South America is that native wild varieties are still found today in very remote areas of certain countries such as Peru.

Whereas, there is recorded history to show that before 1548 tomatoes weren’t common in Italian culture.

And there are many anecdotal stories of how the culture and diet was prior to when tomatoes arrived in Europe.

Which was that vegetables were bad for your health (source: The History of the Arrival of the Tomato in Europe).

Garlic, and onions in old Italian culture (pre-1500), were seen as being food for low class people.

And foods such as eggplant (aubergine), potatoes, and peppers were believed to be harmful to the body.

Spanish explorers/conquerors introduced to tomatoes in the Americas

There is now what are called the West Indies, a group of tropical islands in the Caribbean ocean to the southeast of the USA. Parts of North America, and Central America were known as the Indies, and were under the rule of the Spanish empire in the 1500’s.

In these regions, tomatoes were discovered by the Spanish when they took control of it.

At that time tomatoes were a key part of the diets of the inhabitants of these regions.

It’s believed seeds were taken back to Spain, and Europe, where they were first introduced around about the 1550’s, where they eventually made their way to Italy.

In some cities around the world, regular tomatoes are very common.

If you’ve never come across them, plum tomatoes are more oval in shape and tend to be a bit smaller than regular tomatoes.

Plum tomatoes are more favored in Italian cooking because they contain more flesh than regular tomatoes.

This means when they’re used to make strained tomatoes you get much more sauce.

Because the seeds are and goo surrounding the seeds generally doesn’t add much to the volume of the sauce.

Here’s a video showing how tomatoes are made into sauce to be used in pasta, pizza, and other Italian recipes the way it’s made in Italy:

There are a few different varieties of plum tomatoes, Roma and San Marzano are some of the more popular and common ones.

I recently looked at which is better, Roma or San Marzano plum tomatoes, and explained what I found in this article about plum tomatoes and Roma tomatoes.

The research of historian Rudolf Grewe states that the first known written record of Italian dishes made with tomatoes was called ‘alla spagnuola’, meaning of the Spanish style, or like the Spanish.

Showing that these dishes came from Spanish influence. Or, were at least inspired by Spanish food and culture.

He also states that many very early French recipes from around the same time were also called dishes containing tomato as being of Spanish origin. Such as, ‘sauce espagnole’, or Spanish sauce.

As well as, ‘andalouse’ named after the Andalusian region in Spain.

This gives further evidence that tomatoes and tomato dishes originally came from Spain.

And were adapted into Italian cuisine from Spanish influences.

Apart from adding a lot of flavors, and making dry dishes very moist and pleasant to consume, it’s also considered to be high in beneficial nutrients.

Many people also use vegetable cooking oil as salad dressing, and to stop food from sticking to the bottom of a pan.

So, I took an in-depth look into the differences between olive oil and vegetable oil.

I summarized it in this article about olive oil vs vegetable oil.

What Did Italy Eat before Tomatoes? 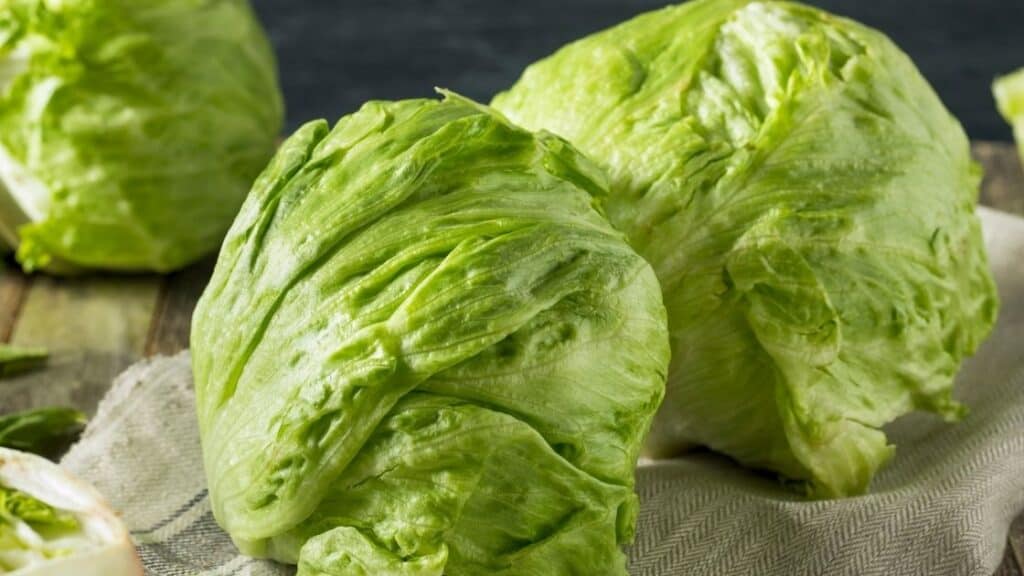 Since tomatoes only arrived in Europe in the 1500’s, and were first recorded being in Italy in the year 1548, I was curious what kinds of dishes were common in Italy before tomatoes arrived.

Generally, meat and selected vegetables such as lettuce were consumed prior to tomatoes arriving in Italy.

According to historians vegetables were considered bad for one’s health at the time when tomatoes arrived in Italy.

Some vegetables such as garlic and onions were seen as being low class foods to eat.

Special mention is also made of eggplant and lentils which were said to be avoided.

This makes sense since lentils are toxic when consumed raw.

So, it remains a mystery why these foods were recommended to be avoided in Italian food culture prior to the 1500’s.

When Did Pasta Come To Italy? 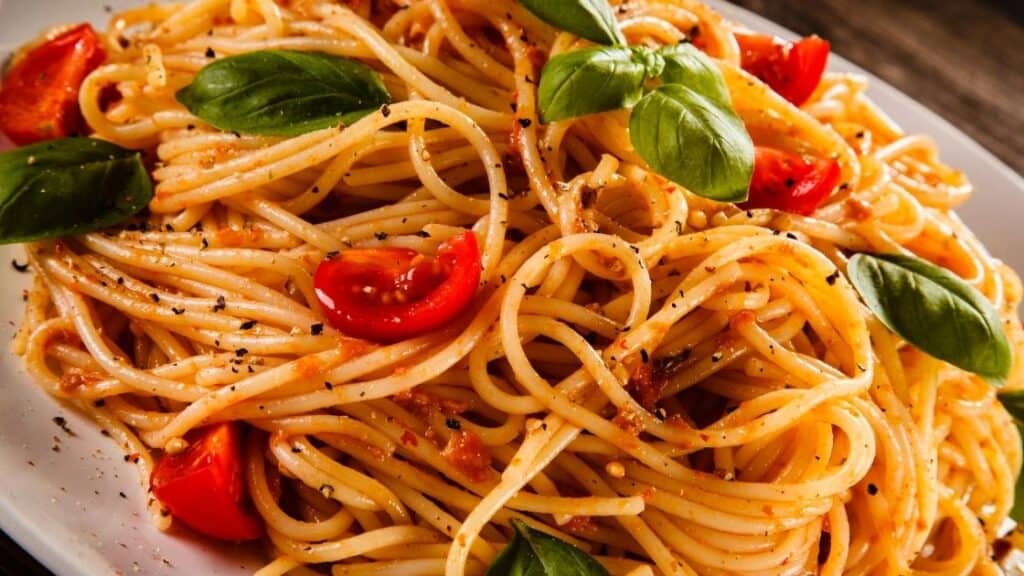 Pasta is generally considered to be synonymous with Italian.

But, if you think about noodles that are common in Asia are also a type of pasta, and it’s clear from history that what is called pasta was common in many cultures.

But, when did pasta first begin being used in Italy and Italian cooking?

Pasta was first recorded as being consumed in Italy in the 1550’s about the time that tomatoes first came to Europe and Italy.

At this time common pastas were vermicelli, maccheroni, and lasagne.

But, at that time they were cooked for half an hour to 2 hours to make them very soft.

Nowadays most people cook pasta until it is ‘al dente’ or just cooked.

This typically takes about 10 to 15 minutes.

The old way of cooking pasta that historians have found was common in the 1550’s was to cook it until it was ‘fon dente’ or melting.

By about the 1760’s it was recorded that there were over 30 different shapes of pasta made in Italy.

It was also common that pasta was not served as a dish on it’s own as it is today.

Instead it was served as a side dish or as a desert.