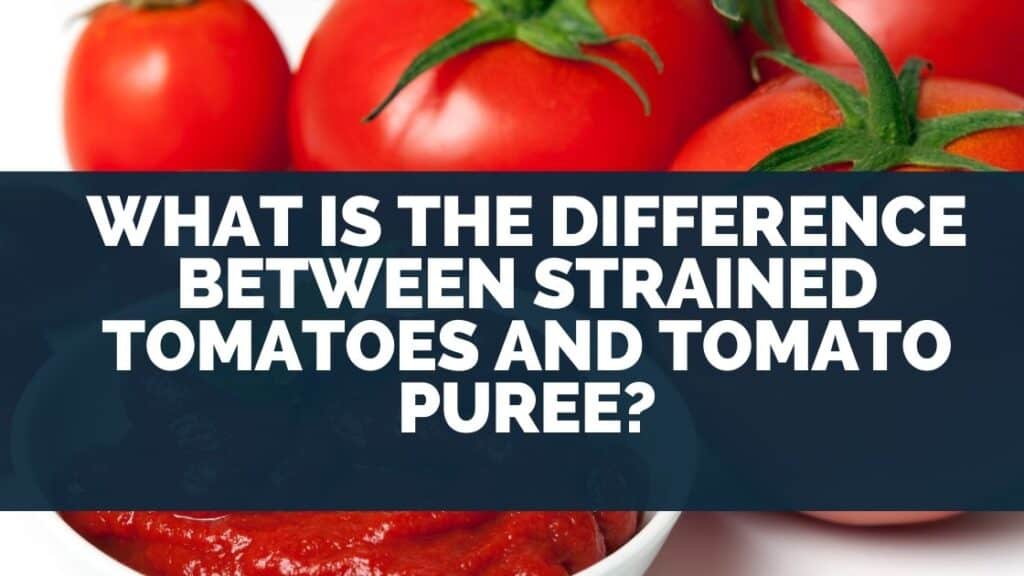 Tomatoes are versatile and they are often prepared in a variety of ways to preserve them and make them more convenient to cook with.

Two such methods are tomato puree and strained tomatoes, but you may be wondering if one can be substituted for the other.

Today, I will explain if there are any differences between strained tomatoes and tomato puree.

Strained tomatoes and tomato puree are the same thing.

They are made in exactly the same way.

They are boiled, and then the skins are removed.

They are then blended briefly and then strained through a sieve.

The resulting mixture is then boiled down to make it thicker and stronger-tasting.

Can I Use Tomato Puree Instead of Strained Tomatoes? 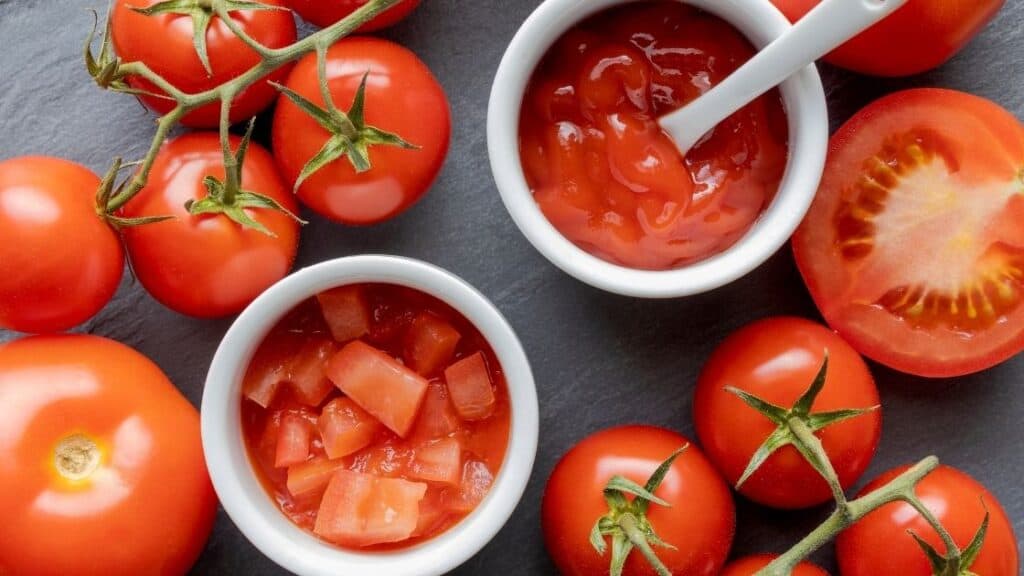 Tomato puree is a concentrate made from cooked tomatoes.

The same is also true of strained tomatoes.

But, in a recipe can you use one or the other, or are they different?

It’s perfectly fine to use tomato puree instead of strained tomatoes.

The reason is both are made in exactly the same way.

Therefore, they have the same properties and flavor.

It’s common for people to call two things that are the same two different words.

In this case, tomato puree and strained tomatoes refer to the same tomato product.

The process of making tomato puree/strained tomatoes is to cook the tomatoes and reduce them down to a thicker liquid.

For the remainder of this article, I will refer to tomato puree and strained tomatoes simply as tomato puree.

This saves space when storing them, and also kills any bacteria or microorganisms that are in the tomatoes. This has the effect of making tomato puree/strained tomatoes keep for longer.

It also allows it to be used easily on popular recipes such as pasta sauce, and on a pizza.

The name strained tomatoes implies that they are tomatoes that have been strained to remove the seeds and skin.

This is true, however, when it’s made it’s concentrated by boiling it to make some of the water evaporate off.

For example, this brand of strained tomatoes called Pomi made in the USA, says on their website that they make it in the following way:

“Tomatoes are washed and crushed. They go through a refinement process that includes sieves to eliminate seeds and peels. The product is then mixed with tomato juice and lightly concentrated”

Regular tomatoes need to be blended or mushed to make them spreadable and even consistency.

There is a bit of work upfront to make tomato puree, therefore, it’s best to make it in a large batch and store it in jars.

Or, buy it from your grocery store.

Here’s a quick overview of how tomato puree – also called strained tomatoes are made:

Here’s a video that shows how tomato puree is made:

If you’ve ever used either strained tomatoes or tomato puree before you may have noticed that it is a similar thickness and consistency as tomato sauce.

Here’s the difference between tomato puree and tomato sauce.

Tomato sauce is made by cooking together with other ingredients as well as tomatoes.

The simplest is to use onions and garlic.

However, other vegetables such as celery and carrot are used to give it a very delicious flavor.

The end consistency of both is virtually identical.

To make tomato sauce generally, the onions, carrots, and celery are fried in olive oil.

Then tomato puree or whole tomatoes are added.

After that, the sauce is either served as it or is blended to make it much smoother.

Often the sugar is also added but some people prefer not to add sugar.

So overall, the main difference is that tomato puree is only tomatoes, and sometimes salt, and sugar.

Whereas, tomato sauce is made with the fried onion at least.

But, it also commonly contains other vegetables such as carrots and celery.

Tomato paste is a much more concentrated form of tomato puree.

It’s boiled for longer to remove more of the water.

It has a much thicker consistency.

Tomato paste is typically added into a dish that has some liquids to rehydrate it and spread the tomato flavor throughout the dish.

It has the consistency of mashed potato.

Interestingly, when tomatoes are boiled eventually the water will separate from the tomatoes.

Then when it’s poured gently through a very fine sieve the water will come out the bottom and the tomato solids will remain in the sieve.

Here’s a very good video that shows this process to make tomato paste:

You’ve probably heard of a raw food diet and the claim that raw foods are healthier than cooked foods.

In all my research I have found that this is true for some foods, but not true for others.

For example, seeds and nuts that are lightly toasted change the chemical composition, and they sometimes can have more nutrients.

I looked into whether cooked tomatoes are healthier than raw tomatoes.

And provided a detailed analysis of the difference in nutrients in this article about how many raw tomatoes you can eat in a day. 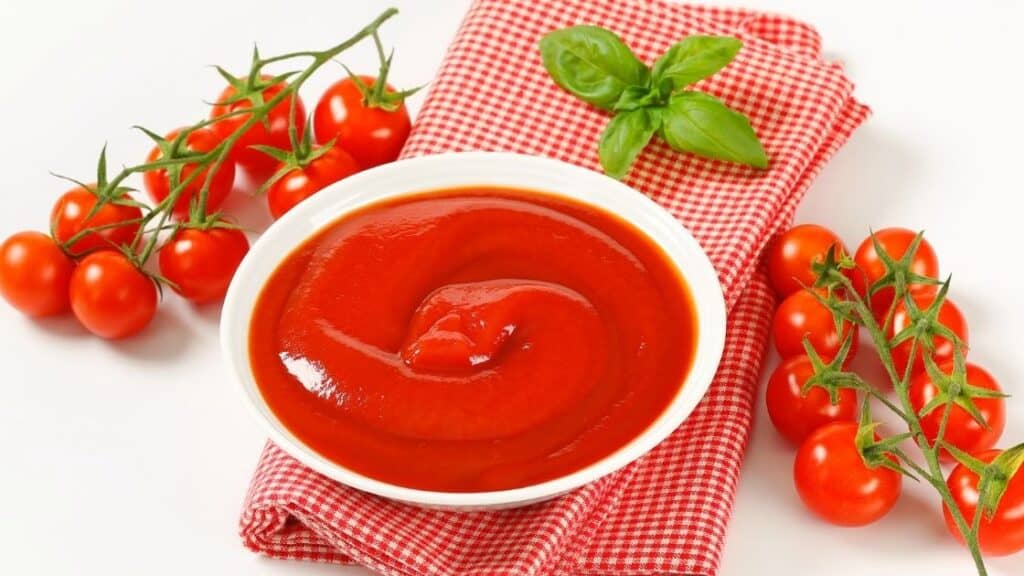 A recipe can often call for tomato sauce, but you may only have some tomato puree.

Or, you might only have tomato sauce but need some tomato puree for a recipe.

So, here’s how much tomato puree equals tomato sauce.

But, tomato sauce has at least onions and sometimes carrots, celery, and sugar as additional ingredients. Whereas, tomato puree is only tomatoes, and typically salt, and sugar are added.

Tomato puree can be made from canned tomatoes.

And canned tomatoes last much longer than fresh tomatoes which makes them more convenient.

Canned foods tend to last almost forever, and you may be wondering how long canned tomatoes will last before they expire and how to tell if canned tomatoes have gone bad.

I explained the answers to these questions in this article about how long canned tomatoes last. 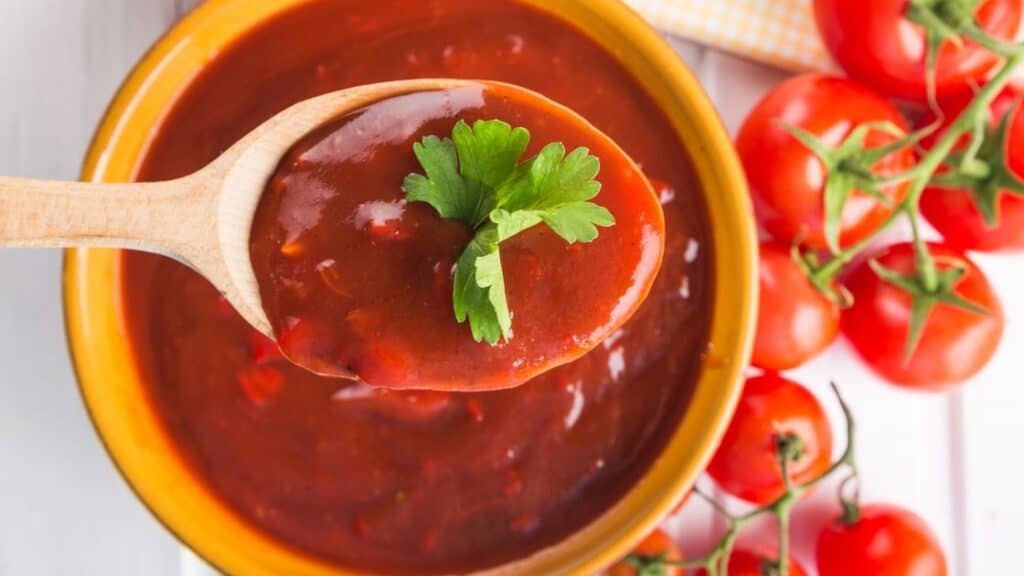 Tomato sauce is an ingredient in many recipes.

But, you might not always have any on hand.

Here are some good substitutes for tomato sauce.

Canned tomatoes put in the blender are also very similar provided you add salt and sugar to taste.

The main difference is that Tomato sauce is typically made with fried onions, celery, and carrots.

Before it is put in a blender and strained.

Therefore, the other substitutes won’t have the depth of flavor that tomato sauce has.