I’ve been learning a lot about tropical fruits of late and really started to wonder about the difference between jackfruit and durian.

So, what’s the difference between jackfruit and durian?

Jackfruit is a lot sweeter than durian.

Durian has bigger spikes on it’s skin compared to the spikes found on the skin of a jackfruit. Jackfruit typically grows to be much larger in size than durian.

Both durian and jackfruit have a strong unpleasant smell, and durian is known as the stinkiest fruit in the world.

Because of that durians are banned in some public places in Asian countries.

On top of that, they also have some other differences, so read on discover more about the differences between jackfruit and durian.

Go to top
Table Of Contents show
1 Are jackfruit and durian the same fruit?
1.1 1. The difference in taste between durian and jackfruit
1.2 2. They have different skin
1.3 3. They are a different size
1.4 4. Their pulp looks very different
2 Do durian and jackfruit smell the same?
3 Where is durian fruit banned?
4 Is it bad to eat too much jackfruit?
4.1 Is it bad to eat too much durian?
5 What are the similarities between jackfruit and durian?
5.1 1. They have similar skin
5.2 2. They originated in similar parts of the world
5.3 3. They grow in similar climates
5.4 4. Their inside is quite similar
6 Conclusion

Are jackfruit and durian the same fruit?

Jackfruit and durian are different fruit, the differ because they:

1. The difference in taste between durian and jackfruit

Durian isn’t as sweet as jackfruit. Durian has a slight onion taste to it.

Jackfruit on the other hand is creamier and has a more fruity taste.

Most people prefer jackfruit over durian because it is sweeter, although both are nice to eat.

Here’s an interesting video of a person trying jackfruit and durian for the first time:

2. They have different skin

Both durian and jackfruit have spiky skin, that gives your hands a massage as you hold it.

But, the spikes on jackfruit aren’t as sharp, are smaller, and there are much more of them.

The skin of durian by comparison has large spikes that are sharp and there aren’t as many of them.

3. They are a different size

Jackfruit are usually harvested when they are about the size of two soccer balls.

Imagine you are holding to soccer balls next to each other.

That’s about the size a jackfruit will grow to.

However, they’re completely oval. Durian on the other hand grow to about the size of the ball in American football, and are also completely oval or circular in shape.

The fruit inside the hard exterior of durian is white in color, and has a texture similar to mashed potato. Jackfruit on the other hand is a deep yellow.

Almost a really light orange, and is a lot slimier, and softer.

The jackfruit stem goes inside but doesn’t reach all the way to the bottom of the jackfruit. 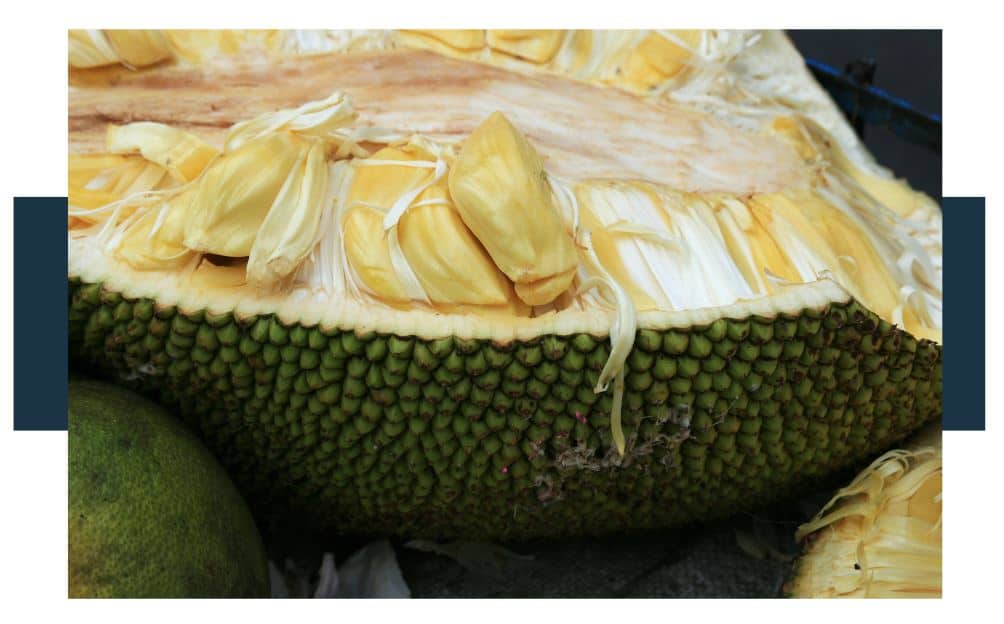 So, more of its inside is taken up with fruit. Durian on the other hand is segmented into different compartments, and each piece of fruit you take out is housed in it’s own special compartment.

The skin of a durian is also a lot thicker so there’s less fruit inside. 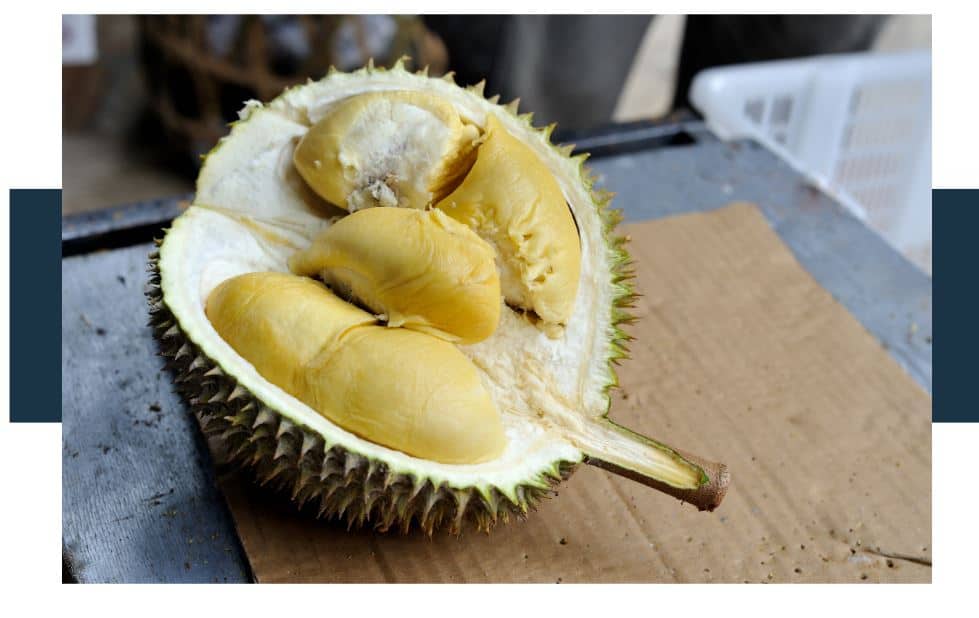 Do durian and jackfruit smell the same?

Although, both durian and jackfruit have a strong smell. But, jackfruit on the other hand doesn’t smell terrible like durian does.

Durian though, has an unpleasant odor that smells like a rotten egg mixed with garbage, and onion.

Here’s a funny video of people smelling durian for the first time:

Where is durian fruit banned?

Durian fruit is banned in many public places in Asian countries.

It is banned on a lot of public transport in Hong Kong, Japan, and Thailand. In Singapore some taxis also have signs that let people know they won’t give you a ride if you’re transporting some durian.

Is it bad to eat too much jackfruit?

It isn’t bad to eat a lot of jackfruit.

Too much jackfruit though can be bad for your health.

For example, if all you eat is jackfruit for many weeks, you’ll be deficient in other nutrients.

As part of a healthy diet, you should eat a combination of foods, and not eat one type of food for a long time.

Some people go on a fast where they will eat one type of fruit for example bananas for a long time.

I recently wrote an article about whether you can live on just bananas and in my research I found that nutritionists recommend to not stay on a fast like this for more than a few weeks.

Which means you should NOT eat jackfruit at every meal all day every day.

But, as long as you’re eating other fruit as part of your diet, and other fruits and vegetables throughout the day you can eat as much jackfruit as you want.

Is it bad to eat too much durian?

The same is true for eating durian.

As long as it isn’t the only thing you eat, and you include it as part of a balanced diet, you’ll be perfectly healthy eating as much durian as you like.

What are the similarities between jackfruit and durian? 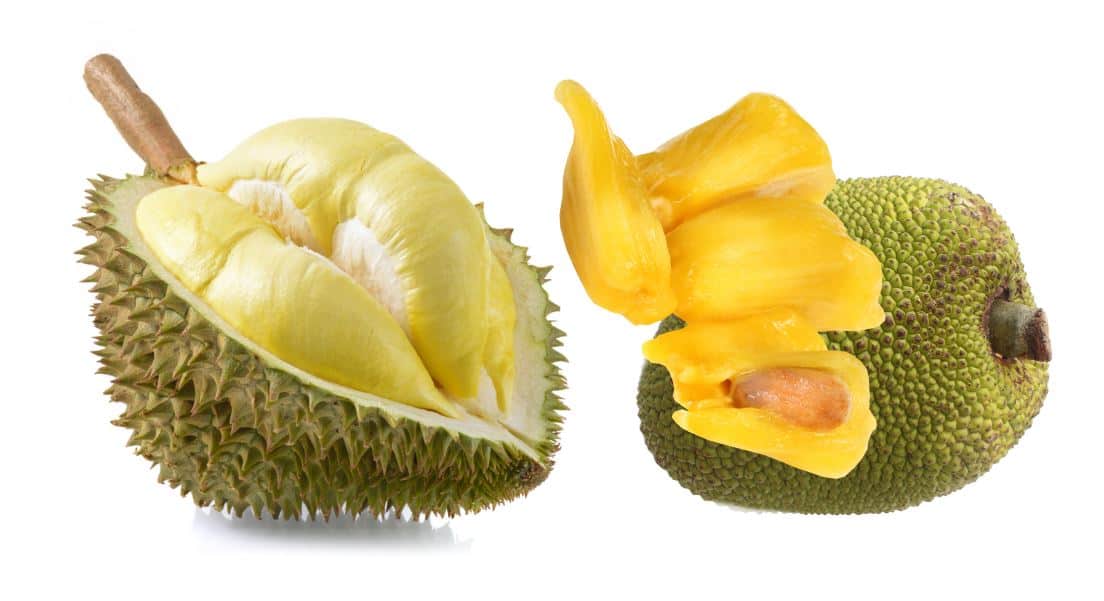 Although jackfruit and durian taste different, they have a few similarities.

1. They have similar skin

Both durian and jackfruit have green skin that is spiky to the touch. And both of their skins form a protective outer layer around the fruit that is very hard.

2.  They originated in similar parts of the world

Durian originated in the South West of the region directly below China, in the countries of Sumartra and Borneo, according to Wikipedia.

3. They grow in similar climates

Although durian and jackfruit originate in slightly different regions, they grow in similar climates and are found throughout South East Asia.

In countries such as Thailand, Vietnam, and Malaysia.

And they both grow best in tropical weather.

Although durian and jackfruit will grow well in other tropical countries such as those found in South America.

They have fruits that are nearly identical, so it wouldn’t make much sense to import the Asian varieties.

4. Their inside is quite similar

The flesh of jackfruit and durian are both soft, fibrous, moist, and housed in the protective skin.

However, one of the main ways you can tell them apart is how the inside looks.

Durian is made up of compartments surrounded by a hard shell, whereas jackfruit is made up of a continuous piece of fruit that has segments side by side kind of like an orange.

The main differences between jackfruit and durian are how they taste, how the skin looks, and what the inside looks like.

Jackfruit is much sweeter, and most people prefer it’s taste.

Whereas durian tastes a bit oniony in flavor.

The skin on a durian has bigger spikes compared to those found on a jackfruit.

Jackfruit also grows to be much larger than durian.