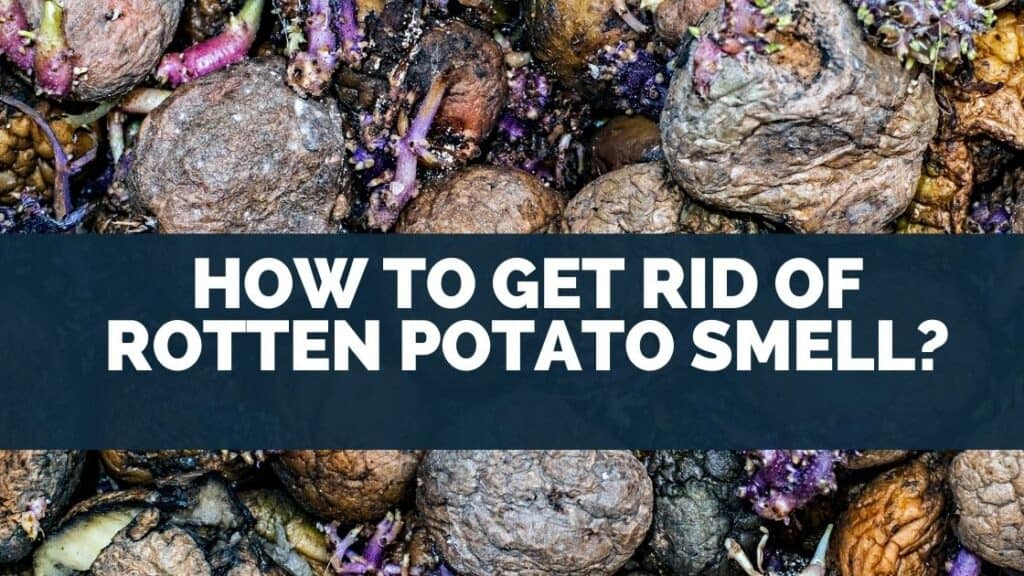 The smell of rotten potatoes is particularly revolting.

And when you’ve had some rotten potatoes in your pantry, car, or a separate container you may be wondering how to get rid of it.

In this article, I’ll explain how to get rid of the rotten potato smell.

Wipe the area with a cloth soaked in water a few times to remove as much of the particles as possible.

Then there are a few options, one can use white vinegar, baking soda powder, mild bleach, and water solution, ozium, or pet odor remover on the affected area.

Let the cleaner you decide to use sit on it for a few days to break it down then thoroughly clean it off.

And repeat as many times as necessary to get rid of the smell. 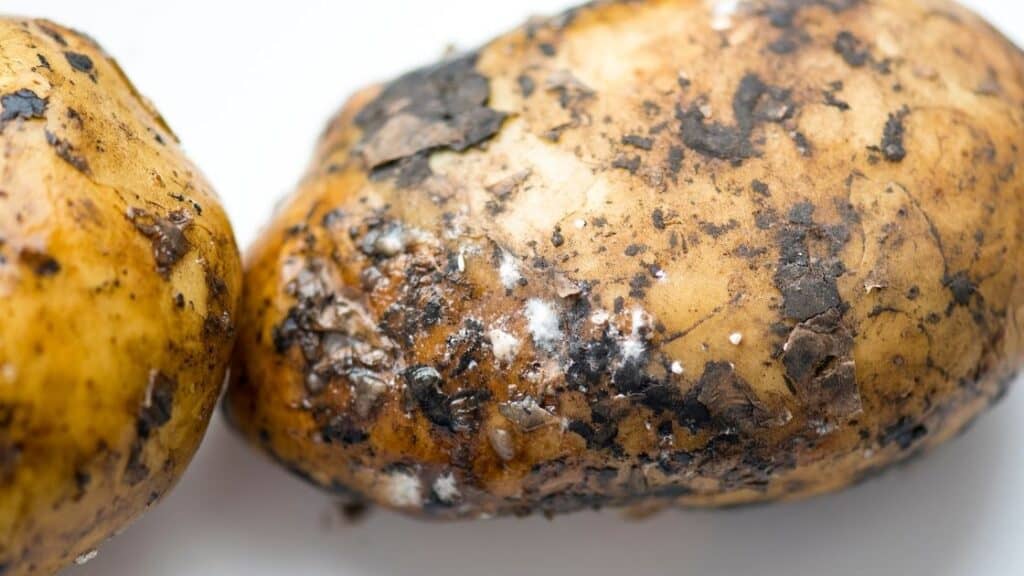 It’s important to identify rotten potatoes, and there is a range of issues that can occur with potatoes that make them inedible.

So, here’s how to know if you have rotten potatoes.

Rotten potatoes exhibit small (1 to 3 mm) black spots on the surface that turn white and green after about 2 weeks.

The area grows to about ½ an inch (1.25 cm), turns brown and small particles (1 to 3 mm) begin to fall off and collect around the potato.

This whole process takes around 2 months, and then the potatoes start to shrink, and skin starts to shrivel.

Here’s a video that shows a timelapse of the whole process occurring:

Potatoes generally don’t begin to rot, unless they have been infected by bacteria and are kept in humid conditions.

The bacterias that cause them to rot are known as Dickeya and Pectobacterium, according to Michigan State University.

If the bacteria is not present potatoes will begin to develop eyes, which are small shoots that eventually turn into roots when the potatoes are planted.

Their skin will also begin to turn green.

Many people wonder whether it’s safe to eat potatoes when the skin starts to turn green, and it’s commonly believed that it’s not safe to eat green potatoes and you should throw them out.

I looked into this further and the scientific reasons behind whether you should or shouldn’t eat green potatoes and potatoes that are soft.

I summarized it in this article about if it’s ok to eat soft potatoes.

Blackheart is a disease that isn’t visible on the skin

Potatoes can also develop a disease that isn’t visible on the surface of the skin.

When you cut into the potatoes they can be brown or black on the interior.

Potatoes will last for around 6 months and are kept in a cool, dry, dark place.

Or if they’re kept in a humid or wet environment they will begin to develop eyes, rot, turn soft, and can develop blackheart.

If bacteria are present they will also begin to rot.

What Happens if You Inhale Rotten Potatoes? 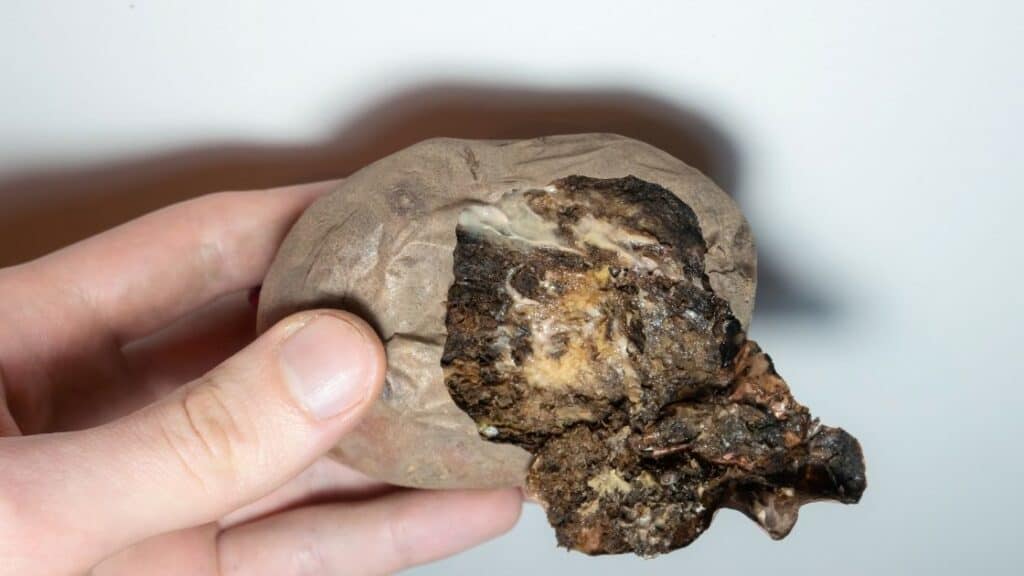 Rotten potatoes give off one of the worst odors, which is generally a sign that they should be avoided. You may have heard that inhaling rotten potatoes can be potentially dangerous, so I looked into the literature about what happens if you inhale rotten potatoes. Here’s what I found.

Inhaling rotten potatoes is very dangerous and can be deadly according to Michigan State University.

Rotten potatoes give off a gas called solanine that in large amounts can render a person unconscious.

If a person remains where the air is particularly concentrated in solanine gas they can die.

The more airflow there is in a room the more gas like that produced from rotten potatoes will dissipate.

Therefore, when rotten potatoes are kept in a cellar or room without any windows the gas can be much more concentrated which can make them much more dangerous.

Due to the ability of rotten potatoes to render a person unconscious, they are particularly dangerous because if a person is rendered unconscious they can hit their head on the floor which can cause death.

Therefore, it’s important to be particularly vigilant with potatoes, and inspect the surface for any signs of rotting, and to be aware of any bad smells coming from areas where you’re storing potatoes.

Can Rotten Potatoes Make You Sick? 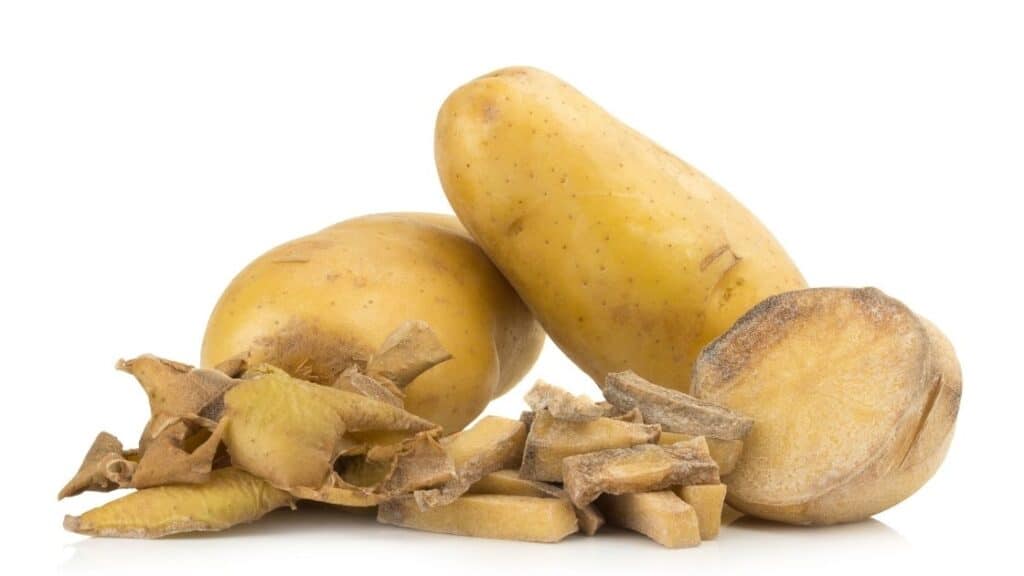 For certain fruits and vegetables, you can cut away the rotting parts and consume the fresh parts.

But, in general, will rotten potatoes make you sick?

Rotten potatoes will make you sick.

They can cause headaches, vomiting, diarrhea, nausea, and stomach pain.

The gas released from rotten potatoes is particularly dangerous and in concentrated amounts can render a person unconscious, and lead to death according to Michigan State University.

Therefore, when you notice that potatoes are rotten it’s best to discard them and ideally put them down a garbage disposal unit, or disperse them in the garden where the gas won’t be concentrated.

For example, you can bury them individually or in pairs.

Or, leave them under a tree or shrub where they won’t be disturbed until they completely decompose.

Avoid throwing them away in an airtight bag, as if the bag ruptures the gas can be released in a concentrated form and poses a risk to anyone who is nearby when it occurs. 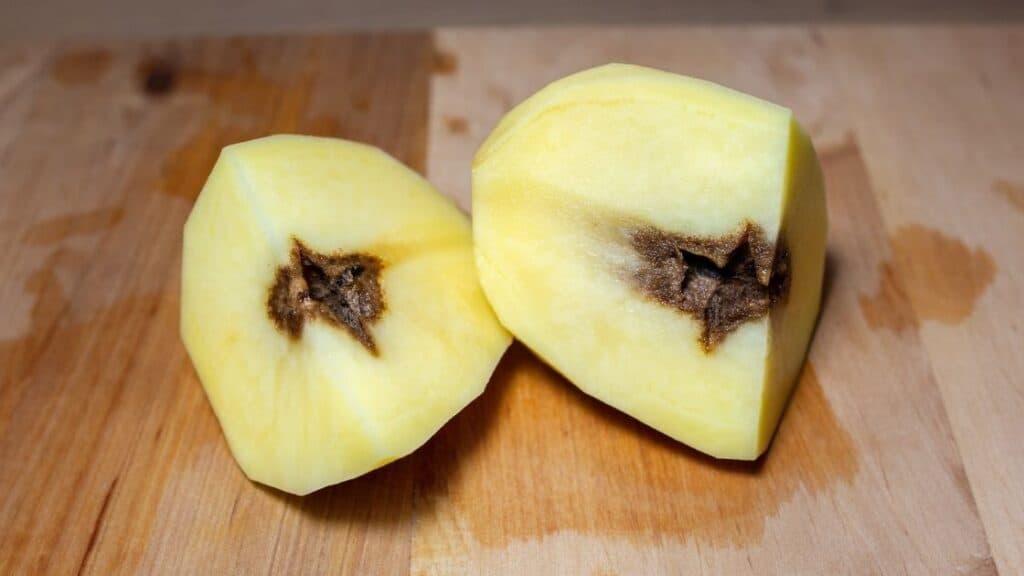 Eating rotten potatoes is not a good idea because they can make you sick.

But, you may be curious what they taste like.

Generally, rotten potatoes have a taste that is very bad.

When tasted the body’s natural reaction is to spit them out because of the bad taste.

They should also be discarded as they produce a gas called solanine which can render a person unconscious and under long term exposure can lead to death.

It’s possible to cut away parts of the potato that are rotten and to consume the rest.

However, it’s best not to as there is a risk of the toxins leaching into the fresh-looking parts of the potatoes.

Potatoes are also generally some of the most inexpensive vegetables, so it’s not worth the risk.

When a potato develops eyes it is a bit different, and eyes can be removed by cutting them away.

Sometimes eyes can go deep into the potato and when you cut the potato you can see a brown ring around where the eye has grown.

Which has a bitter taste when consumed.

Small eyes on the surface can generally be removed by cutting around them with a knife.

Certain peelers also have a part on the end of the peeler that is designed specifically for this purpose. 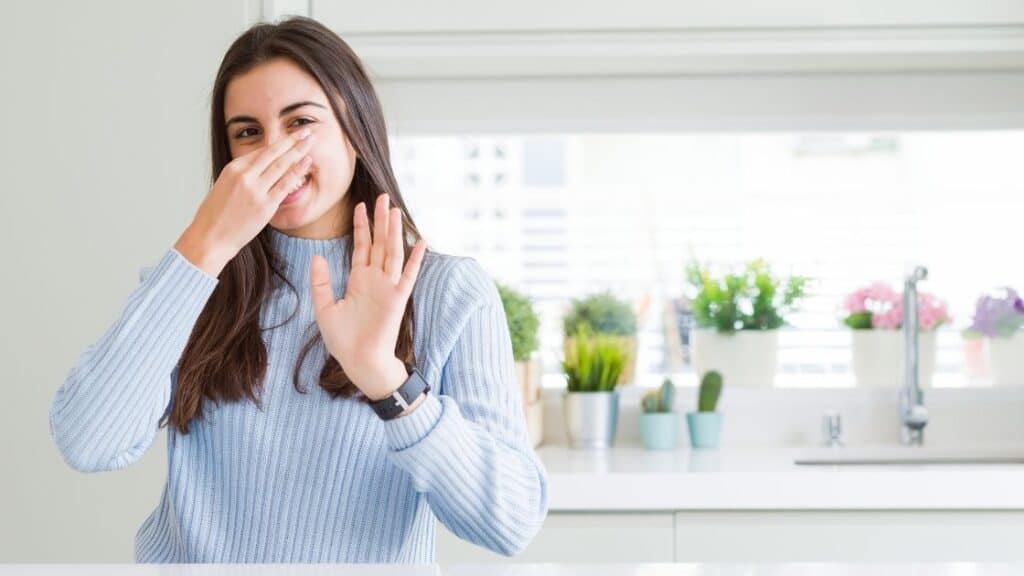 You may notice that the odor of rotten potatoes has started to come up in your home.

So, I thought I’d cover what causes it, and how to get rid of it.

Overall, it’s caused by a rotten potato being somewhere in your home you can’t see.

The smell of rotten potatoes can also linger for some time after the potatoes have been removed.

Take some time to check places where a potato can have fallen by accident.

And then thoroughly check the area to identify where the rotten potatoes are.

If you’ve recently had some rotten potatoes in your home and removed them, the smell can linger, and the area where they were needs to be cleared with a deodorizer.

The best way to deodorize an area where you’ve had rotten potatoes is to thoroughly wash the area with soapy water. Then there are a few products you can use to neutralize the smell.

Baking soda powder can be left in the area for a day or two.

It will remove the enzymes and bacteria that are causing the odors.

White vinegar is also recommended by many people for its odor neutralizing properties.

But, white vinegar has an odor of its own.

So, after using it, wipe it off thoroughly and over time it will break down naturally and the smell of it will go away.

Pet odor removers are generally specially formulated to break down enzymes and bacteria and are very effective at removing bad odors.

2 tablespoons of bleach per 1 quart (1 liter) of water are also good at neutralizing odors.

Pick whichever you have or hand, or are most comfortable using, and use it on the area where the rotten potatoes were sitting.

The smell will also go away on its own provided the rotten potatoes have been removed.

But, it can take some time, so it’s best to deodorize the area with one of the options above.