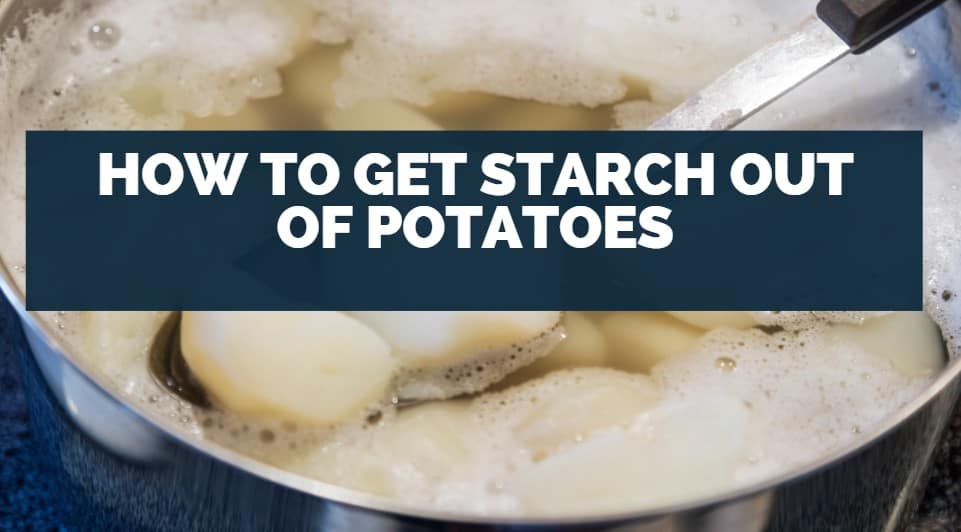 Potatoes are particularly high in starch, and make up a large part of people’s diet.

Starch can be removed from potatoes using a range of methods.

So, today I will discuss what they are.

Generally, peeling, cutting, and then soaking or washing potatoes removes the starch.

To extract potato starch, potatoes are chopped or grated as finely as possible to increase the surface area.

Starch is not water-soluble but a significant amount gets removed using water.

Many people wonder whether it’s a good idea to remove the starch from potatoes, how healthy it is, and exactly how to do it.

So, in this article, I will explain the answers to all of the questions and more.

Should I Wash the Starch Out of Potatoes? 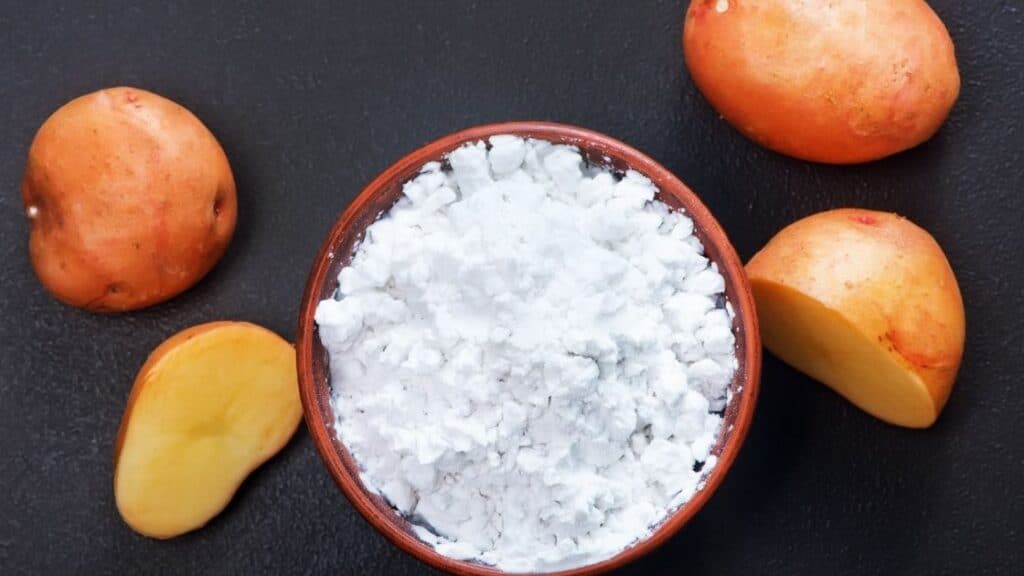 These foods make up a large part of many people’s diets. But, is it good to remove the starch from potatoes?

Overall, it makes potatoes keep their shape better when cooked, makes them lighter on the digestive system, and changes the flavor slightly.

Starch is a type of carbohydrate therefore removing the starch can also be good for people on a low carb diet, or low glycemic index diet.

At the end of the day, it’s a matter of personal preference.

The reason is the shape of chips is very important.

Removing the starch also makes the outside more crispy when cooked, according to renowned chef Martha Stewart.

Starch is also removed from potatoes to make what is called potato starch which is a fine powder that has the texture and consistency of white flour.

It’s then used as an ingredient in baking.

But, it’s also done for peeled and cut potatoes used for a number of recipes to change the flavor and texture of potatoes.

How to get starch out of potatoes by washing them?

Starch can be removed from potatoes by washing them with water.

It works regardless of how finely you chop the potatoes.

Starch is removed by washing it off using water.

So, the more finely the potatoes are chopped the more starch is removed.

However, each recipe requires potatoes to be chopped into different sizes.

For example, potato salad calls for cubed potatoes which have a larger surface area, than finely cut french fries.

Or, grated potato for hash browns and potato tots.

Starch has the effect of making the water cloudy.

Much like washing rice, which is commonly done to make it lighter and fluffier.

The general procedure is to wash them in a colander until the water runs clear.

Chop the potato to the required size, place it in a colander and then run it under water until the water that comes out of the bottom is clear and not cloudy at all.

Another option is to place the chopped potatoes in a bowl or pot and fill it with water.

Then move and mix the potatoes around gently with your hands.

Being careful not to break any of the potatoes, so that they keep their nice shape.

If you’re washing potatoes to be made into mashed potatoes, you don’t need to be as careful.

This tends to take some time but not a lot. It’s common for restaurants to soak potatoes to save time because they make such a large amount.

Here’s how to soak potatoes to remove the starch.

How to get starch out of potatoes by soaking them?

Then place them in a bowl or pot and pour water over them.

Leave it to sit for no longer than 3 days.

And then remove them from the water.

The exact time to soak them is up to you.

But, around 1 to 2 hours is generally long enough for the scratch to be loosened by the water and to settle to the bottom of the pot or bowl.

Then simply pour the potatoes through a colander.

Or, remove the potatoes from the water by hand into a colander to allow all of the water to drain off.

How to extract the starch to make potato starch flour?

The starch powder is made by peeling and chopping the potatoes into chunks.

And then blend it in a blender with added water.

After that squeeze the blended potato and water mixture through a cloth, and collect the cloudy water in a separate bowl or pot.

Allow the collected water to sit overnight so that the starch settles to the bottom.

It will form a solid layer at the bottom of the pot or bowl.

Pour off the water, and scrape it out with a spoon.

The potato powder then needs to be dried which can be done by placing it in a bowl and leaving it in the sun.

Or, it can be baked in the oven on low for about 30 minutes to an hour until it’s dry to the touch.

Then break it up and turn it into a fine powder by pushing it through a sieve with the backside of a spoon or your fingers.

How Long Do You Soak Potatoes to Get the Starch Out? 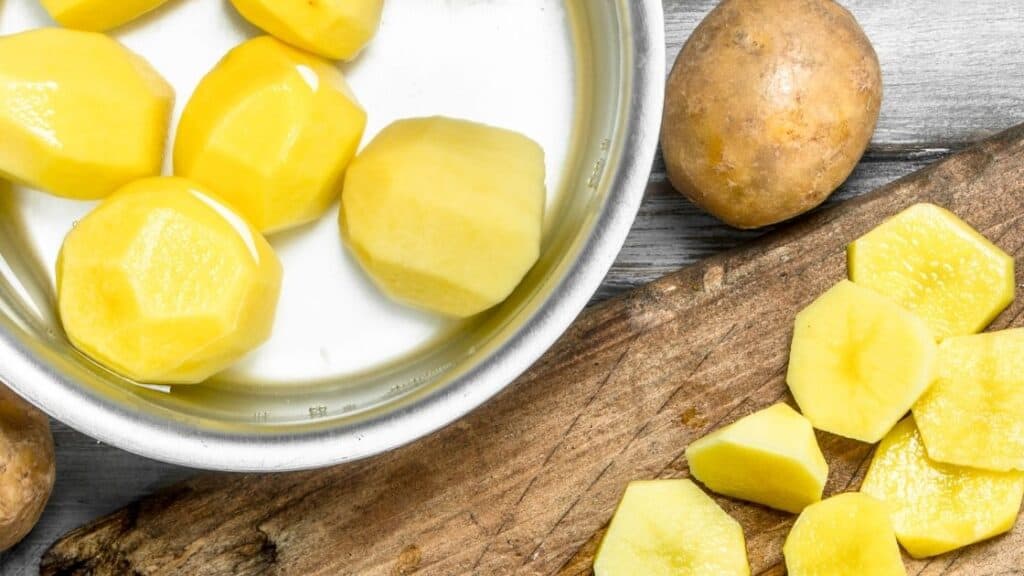 Soaking potatoes to remove the starch is a good way to do it.

But, how long can you leave them soaking in water, and how long should you soak potatoes to get the starch out?

Generally, 1 to 2 hours is the minimum.

But, soaking them overnight is also a common way to soak potatoes to get the starch out.

Washing peeled and cut potatoes also get the starch out, and is a better option if you want to do it instantly and not wait.

Soaking potatoes is done for cooking a large batch of potatoes, which saves time as they don’t need to be washed multiple times.

For example at restaurants, catering, or cooking for a large group of people.

It’s also very helpful if you want to peel and cut the potatoes ahead of time to work around a busy schedule.

Or, other tasks that are time-dependent.

Such as, if you need to pick up the kids from somewhere at a certain time, and won’t have time to wash the potatoes and cook them once you get home.

When potatoes are soaking they can sit for 1 to 2 days and don’t turn brown.

As you may know, potatoes will oxidize and turn brown after being peeled and cut.

But, when submerged in water they don’t turn brown.

Because the water makes it so they aren’t exposed to the air.

This gives you greater flexibility with when you can peel and cut potatoes, as well as, removing the starch.

It’s also important not to soak potatoes in water for too long.

I explained how long is too long in this article about how long potatoes can sit in water. 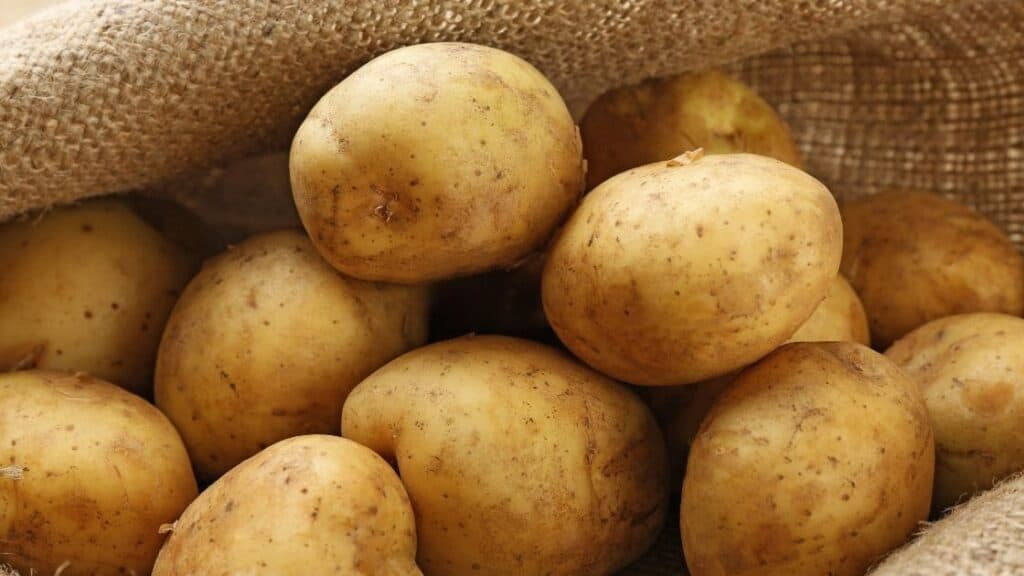 Reducing or increasing your calories affects your body weight.

So, you may be wondering whether removing starch from potatoes reduces the number of calories.

I looked into it, and here’s what I found.

As a whole, it does reduce the calories.

Starch is a type of carbohydrate and carbohydrates contain on average 4 calories per gram according to the National Health Service of the UK (NHS).

So, removing the starch also reduces the calories of potatoes.

An average potato contains 32 calories of starch that can be removed.

Making starch from 6 medium-sized potatoes yields about half a cup of pure starch.

However, this process involves squeezing the potatoes through a cloth to remove the starch.

So, soaking and washing potatoes to remove the starch would remove considerably less.

It’s unknown exactly how much is removed.

But, it is definitely less than 32 calories per medium-sized potato. In my opinion, it’s closer to 10 to 20 calories.

If you soak potatoes before consuming them, it removes in the range of 6% to 12% of the total calories in the potato.

Do Potatoes Lose Calories When Soaked? 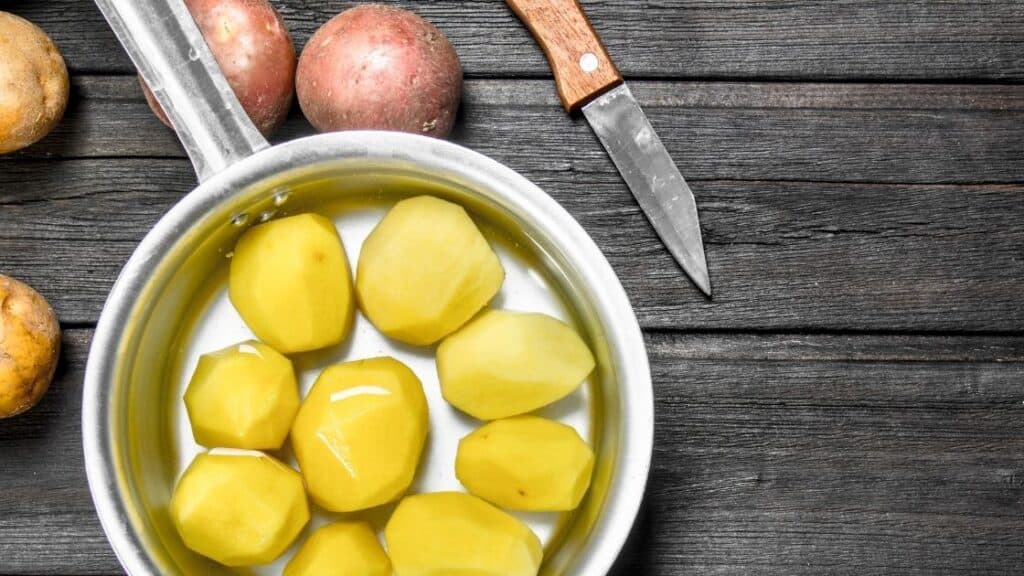 Potatoes and other root vegetables contain more calories than most other vegetables.

So, I was curious whether the amount of calories in potatoes goes down when you soak them.

I did some research to see whether it does, and here’s what I found.

Soaking potatoes removes some of the starch.

Starch is a carbohydrate that contains 4 calories per gram.

So, removing the starch reduces the total amount of calories.

Washing potatoes also has the same effect as soaking them.

And therefore washing potatoes also remove about 6% of the calories that potatoes contain.

Starch is only removed from the surfaces of the potato as it’s soaked or cooked.

And most of it remains in the flesh of the potato.

Potatoes that are grated, or chopped very finely and then washed or soaked will contain less starch and therefore fewer calories than potatoes that are cut into large pieces.

The reason is there is more surface area on more finely chopped potatoes.

This allows more of the flesh of the potato to be in contact with the water, so more of the starch will get washed off.