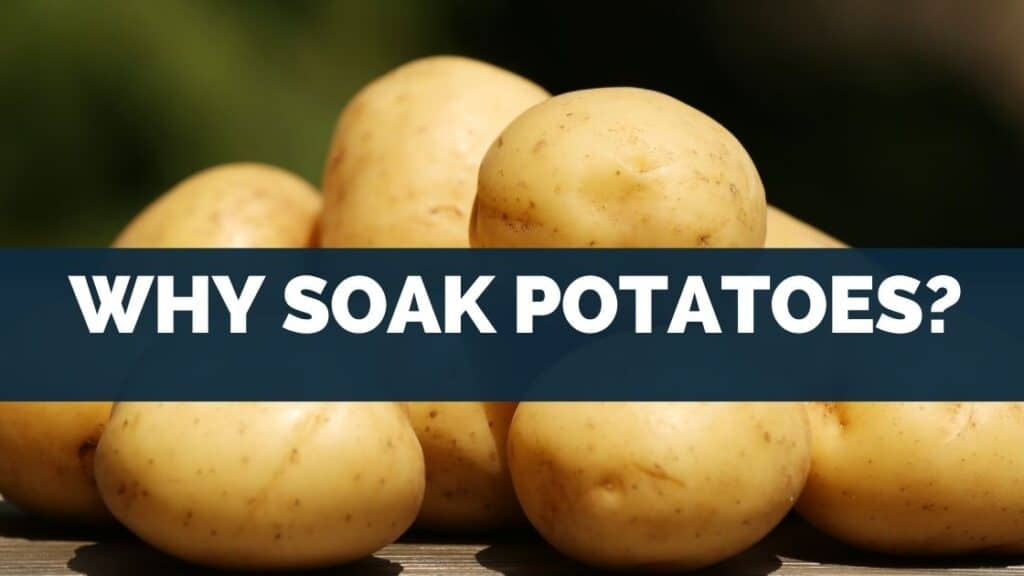 But, I was curious why people soak potatoes, and what it does for the cooking process.

I looked into what multiple chefs had to say and here’s what I found.

It also changes the flavor of potatoes.

Removing starch from potatoes makes them hold together better when cooked.

Which is especially helpful for certain recipes such as chips, and potato salad.

What Happens if You Don’t Soak Potatoes?

Soaking potatoes is generally recommended. But, I was curious what happens if you don’t soak potatoes.

As a general rule, potatoes that aren’t soaked fall apart more easily after being cooked.

Potatoes that are soaked hold together better once cooked.

This is especially helpful for fries.

It also changes the flavor which some people prefer.

As you may know, there are many different kinds of potatoes that have a different amount of starch.

They are generally categorized as waxy or starchy.

It’s common for all types of potatoes to be used in chips.

The way to get around the fact that starchy potatoes tend to go soft after being cooked is to soak them.

This makes the outside more firm, and keeps the fries together, while the inside is nice and fluffy.

Lately, I haven’t been eating potatoes, but when I did I would often simply buy the cheapest ones since I’m not that fussy.

But, I have gone through phases where I would cook particularly intricate dishes, and when I did I would try to choose the right potatoes for the job.

I particularly like potato salad. And for that, I would use waxy potatoes since they hold together the best.

Waxy potatoes don’t become as mushy around the edges as you mix in the mayonnaise and other ingredients.

Which makes the overall salad look a lot better.

Well-known chef Gordon Ramsey has said that starch in potatoes makes them mushier when cooked and they don’t hold their shape as well.

Here’s a video where he explains all about potatoes and interviews a very experienced potato and vegetable seller:

For reference, I put together a table that shows the common types of potato and whether their waxy or starchy:

Another chef has reported that adding lime/lemon juice to the water before soaking potatoes or a touch of vinegar.

A lot of people report that double frying potato chips give the best texture.

This involved cutting the potatoes into chips.

Then soak them for about 15 minutes to an hour. And then fry them lightly.

After that, you should allow them to drain in the rack or a special scoop that is a mini rack, and then place them onto a piece of paper towels or baking paper to dry out and cool down.

Once they’ve cooled, fry them again and cook them all the way through.

Many people report that the reason that fries you buy from a fish and chip shop or from fast food restaurants are mushy, and not crispy on the outside is because they don’t do this process.

Soaking potato chips for baking – only soak them for 5 mins

It’s known that soaking potato chips for baking should only be done for about 5 minutes.

Any longer than that and they tend to stick together.

This isn’t so bad, but somewhat defeats the purpose of chips where you can eat them individually and dip them in your favorite sauce. Whether you like aioli, tomato, sweet chili, or something else.

Cut potatoes that are left exposed to the air develop turn slightly brown due to their interaction with the air.

So, it’s important when you soak potatoes to make sure they’re fully submerged.

Soaking for them for mashed potatoes, hash browns, and boiled potatoes

Soaking isn’t necessary for mashed potatoes because you don’t need to preserve the shape of the potatoes.

But, with hashbrowns, it’s up to you.

Hash browns are made by grading raw potatoes.

Soaking them before shaping them into a hash brown will remove the starch.

And change the flavor.

Some people prefer a starchy, heavy flavor, whereas, a lighter flavor from soaking potatoes before cooking them can be easier on the stomach.

Boiled potatoes tend to hold their shape quite well.

But, it can improve the final shape of them if you soak them.

This is more of an issue with all purpose and starchy potatoes.

And not so much with waxy potatoes.

Should You Soak Your Potatoes in Salt Water before Frying?

I’ve also heard that soaking potatoes in salt water can be a good idea before frying them.

So, I looked into whether this is a good idea, and what it does.

It’s a good idea to soak potatoes in salt water before frying.

Adding salt to the water improves the taste and appearance.

But, it’s not the only thing you can add to the water.

Lemon or lime juice, as well as, a touch of vinegar in the water can also be used.

Salt can be added before and after potatoes before frying them.

Adding it to the water allows the salt to soak into the surface of the potato, whereas, adding it afterward means you need to shake the chips around to disperse the salt evenly.

The slightly acidic quality of salt improves the appearance of potatoes as well, which is also true of lime or lemon juice, and vinegar.

It’s purely optional but is a common practice when soaking potatoes. 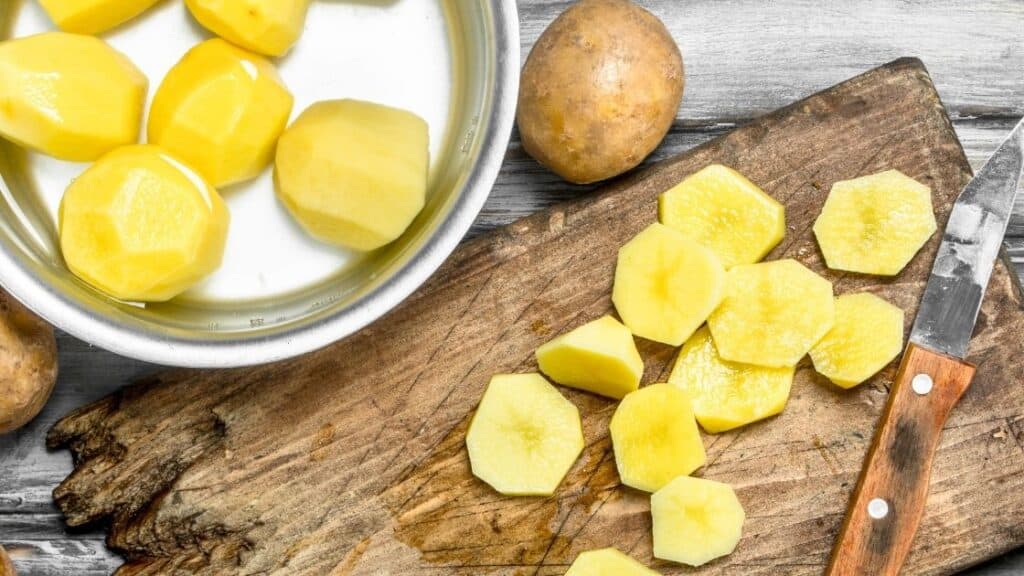 I looked into it and here’s whether it does or not.

But, it’s also true that soaking potatoes in water only will remove starch.

Adding salt to the water is used to improve the taste and appearance of potatoes.

As you may know, potato starch is used in cooking.

The water is then left overnight and the starch settles to the bottom.

After that, the water is poured out and the starch is left at the bottom.

The starch is then dried and turns into flour that is used in baking.

In this process, the potato is shredded or grated to create more surface area for the starch to come out.

But, soaking raw potato chips, peeled potatoes, and sliced potatoes will also remove some of the starch.

Therefore, soaking potatoes in water, with or without salt will remove the starch.