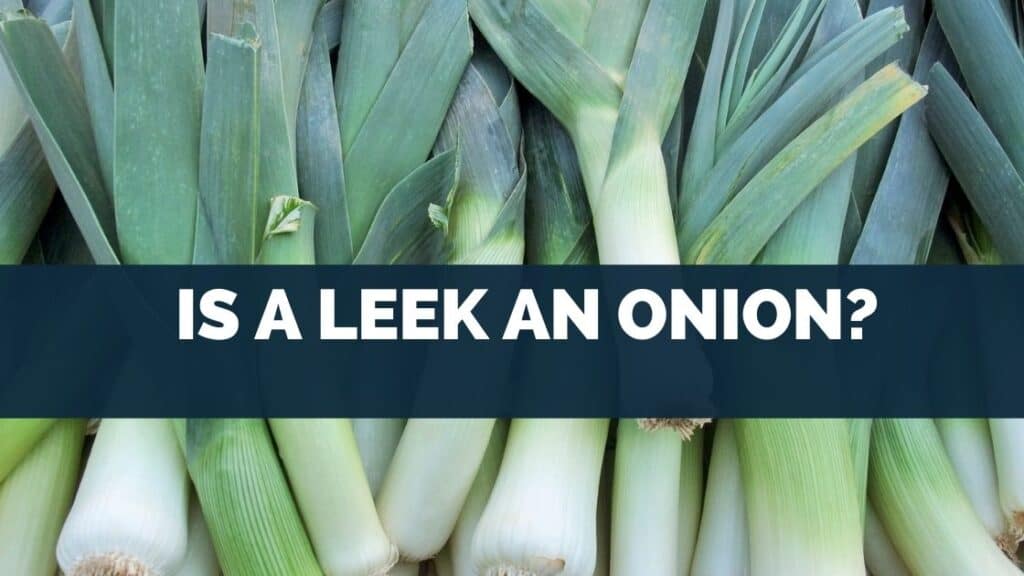 Leeks are very similar in size, shape and color to spring onions, which are also called green onions.

Because of this similarity many people wonder whether a leek is a type of onion.

Today, I will explain whether a leek is an onion.

Leeks are not an onion.

Leeks and onions are in the same botanical family but are different species.

Leeks grow differently and don’t form a large bulb like an onion.

However, both have very similar leaves which are long, thin and green and grow straight up.

In this article I will explain the difference in taste between a leek and an onion, how many leeks equal an onion, and whether leeks can be used instead of onions in recipes.

Go to top
Table Of Contents hide
1 Does a Leek Taste Like an Onion?
1.1 What do cooked leeks taste like
1.2 Closely related vegetables to leeks and onions
1.2.1 The main confusion about the different varieties of the onion family
2 Can I Use a Leek Instead of an Onion?
3 How Many Leeks Equal an Onion? 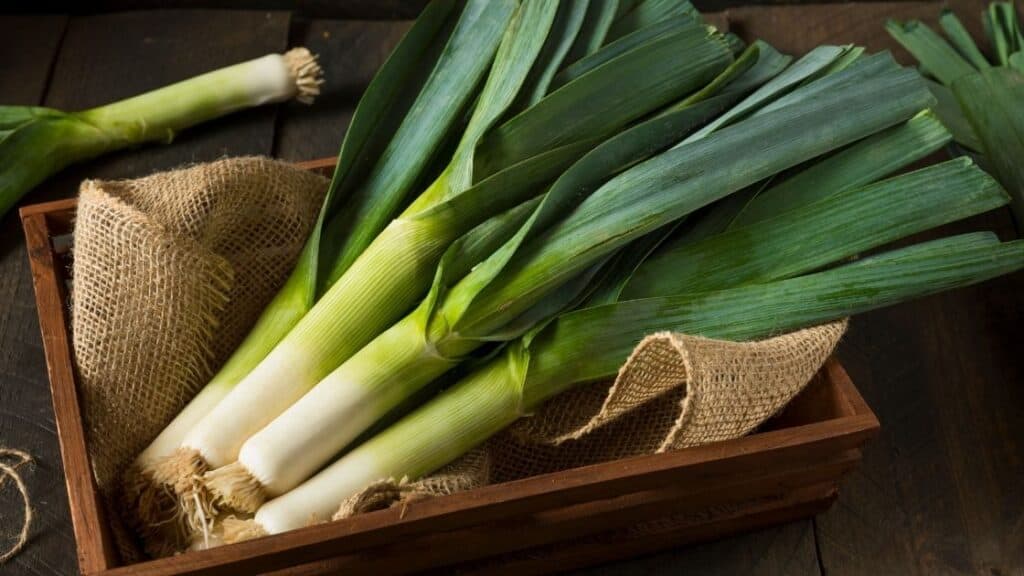 Leeks aren’t as common as onions, and therefore many people aren’t aware of how a leek tastes.

A leek has a very similar taste to an onion.

Leeks have a fresher sweeter taste compared to onions and they aren’t as strong in flavor as an onion.

However, they still have a spicy tangy taste.

It also has a bit of the flavor of leafy greens to it, which isn’t found in onions.

Leeks have a unique flavor to them and you can definitely tell them apart from onion if you were to do a side-by-side taste comparison.

However, they have a very similar flavor profile.

And add a savory, nutty flavor. Onions and leeks go particularly well with meat because they balance out the meaty taste.

Here’s a video that shows how to cut and prepare leeks:

Raw leaks have a much stronger flavor than cooked leeks.

However, brown onions generally have too strong a flavor for most people.

Although you can eat raw leeks they have a very strong flavor similar to a radish that can be too spicy, and irritate your nose.

Raw leeks also give a slight burning sensation in the mouth.

Similar to if you put too much wasabi on your sushi. But, not nearly as strong.

Once they’re cooked however they become leeks like onions, become soft, and sweet, and have a mild spiciness to them that adds a lot to a dish.

Leeks are in the same family as onions, shallots, garlic, scallion, and chives.

Garlic is the most strongly flavored of the onion family, followed by onions.

Here’s a helpful table that summarizes the distinguishing characteristics of each, I’ve also ordered them based on the strength of the flavor:

And here’s another table that shows whether the stems and leaves are used in cooking:

As you can see, leeks are the mildest flavored of the onion family.

However, this is not difficult to do because garlic and onions have such a potent flavor.

In texture, shallots are in between onions and garlic.

They have the appearance of onions.

But, they grow in bulbs with individual segments like garlic.

Chives are a bit different because they have very thin and narrow leaves compared to the other vegetables in the onion family.

They are very thin and have needle-like leaves.

They are primarily used as a garnish to top off a dish.

You also don’t want to cook chives, and they are best served raw.

The bulbs of chives are never sold because they are not very palatable.

Many people only use them for their leaves.

Spring onions are an onion that is harvested early before it has developed into a very large bulb.

They still have a good-sized bulb.

But, the flavor is much milder, and sweeter.

Scallions which are also commonly called green onions never develop a bulb, and instead are a round cylindrical shape with an ever so slight bulb at the base.

This is garlic that is pulled early.

Therefore, it isn’t as fully developed as mature garlic.

The main confusion about the different varieties of the onion family

Onions can sometimes be pulled early before they’ve developed a bulb.

They have the appearance of green onions, and spring onions.

Because of their similar appearance often the words for each are used interchangeably.

There are a few different colored onions.

I recently compared the nutrients in red and brown onions and looked at which contains more vitamins and minerals in this article about red onions vs white onions.

Can I Use a Leek Instead of an Onion? 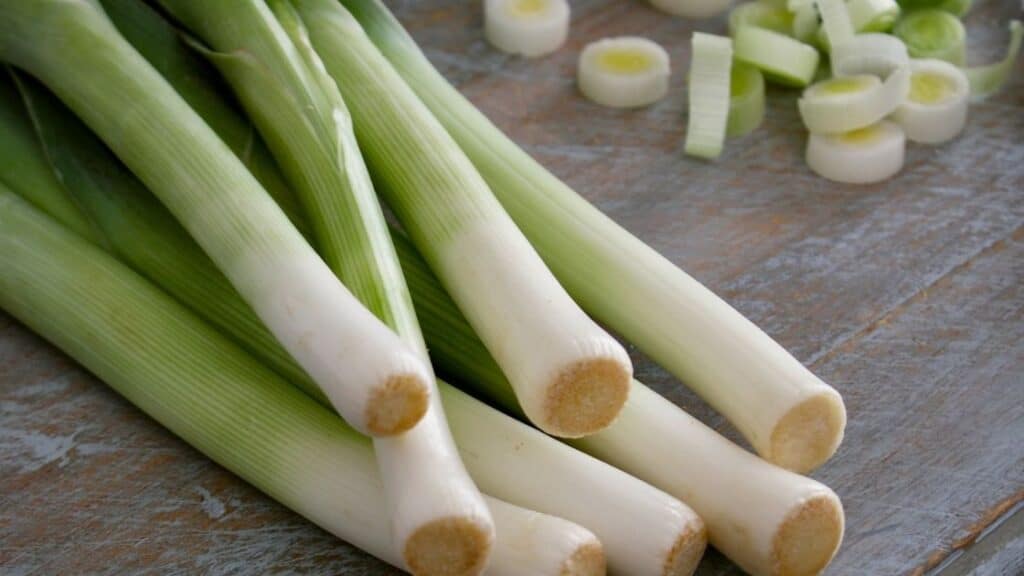 Leeks are in the same family as onions and have a similar flavor.

Onions are very versatile but you might not always have some on hand.

Or, might want to try using leeks when you’d normally use onions, so here’s whether you can or not.

It’s perfectly fine to use a leek instead of an onion.

However, they don’t have as strong a flavor as onions.

Therefore, the end dish won’t have as strong an oniony flavor.

Better substitutes for onions are shallots and spring onions.

Spring onions are an onion that is pulled early before it has grown to a full size.

Therefore, it has a very similar flavor to an onion, except that it doesn’t have as strong a flavor.

A shallot also has a milder flavor compared to an onion.

But, it has a stronger flavor than leeks.

Shallots have the same appearance as onions, except they are smaller when fully grown.

If you’ve never grown onions before you may be curious whether onions produce tubers that can be separated and grown, or whether they produce flowers that produce seeds.

I explained how they grow in this article about whether onions have seeds.

How Many Leeks Equal an Onion? 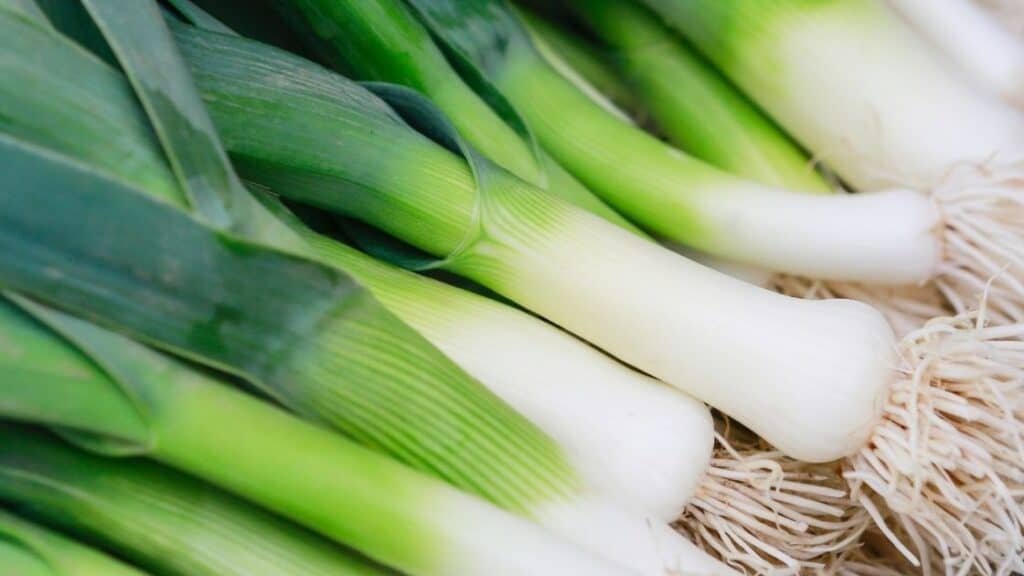 When preparing a recipe it often says to use a certain amount of onions.

Or, you might be used to using a certain number of onions for recipes you cook regularly.

But, if you’re substituting leeks for onions or are just curious how many to buy for a meal, here’s how many leeks equal an onion.

One medium sized onion is exactly equal to a leek that has been prepared by cutting off the root area and the tops of leaves.

When the leek is prepared the root area at the base is chopped off.

And the leafiest parts at the top are often removed.

In some cases, only the very light green to a white area along the main stem is used.

On average, once the excess parts have been removed one leek is exactly equal to one medium-sized onion.

Therefore, if you’re using leeks instead of onions use the same amount of leeks that you would onions.

Onions can come in a range of sizes from small to very large.

A medium-sized onion has the same width as the palm of your hand – for average-sized hands.