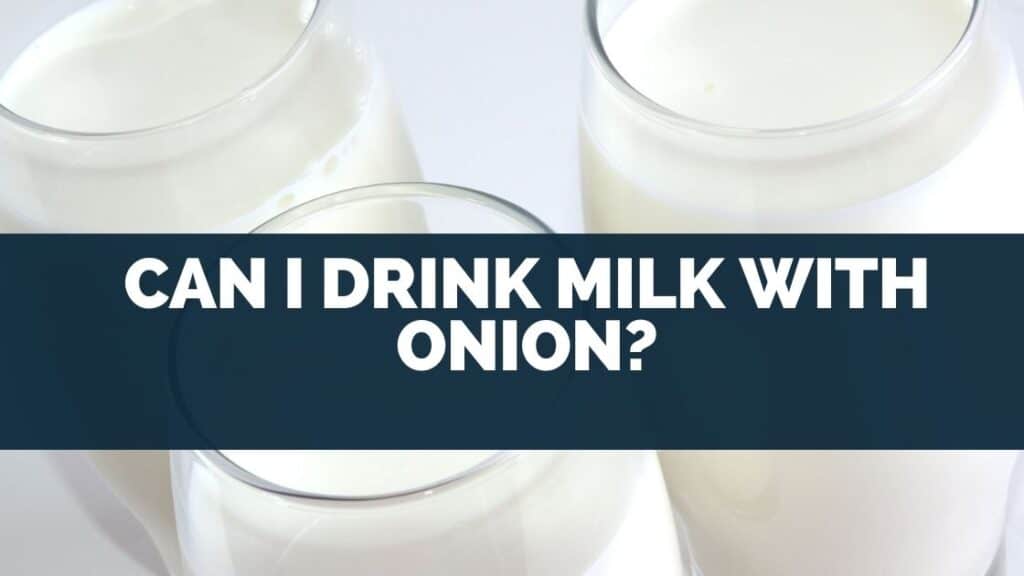 Certain food pairings are quite rare, and one you may not have come across is milk with onions.

Milk is typically susceptible to curdling when mixed with acidic foods such as onion.

So, is it OK to drink milk with onion?

Onion is not acidic enough to cause the milk to curdle which would otherwise cause an upset stomach.

Onion and milk are commonly used together in various cooked recipes, and drinking them together is also fine.

Milk is relatively high in calcium compared to other foods, and as you may have heard milk is good for your bones.

The creaminess of milk tends to go well in savory recipes, as well as, in sweet desserts.

Today, I will explain what effect milk has on onions and whether drinking onion and milk together is bad for you.

Go to top
Table Of Contents hide
1 What Does Milk Do to Onions?
1.1 Acidic foods with milk turns milk into cheese
1.2 Why milk is used in baking and other cooked dishes that include onions?
2 What Is the White Liquid That Comes Out of an Onion?
3 Is Onion Milk Bad?

What Does Milk Do to Onions? 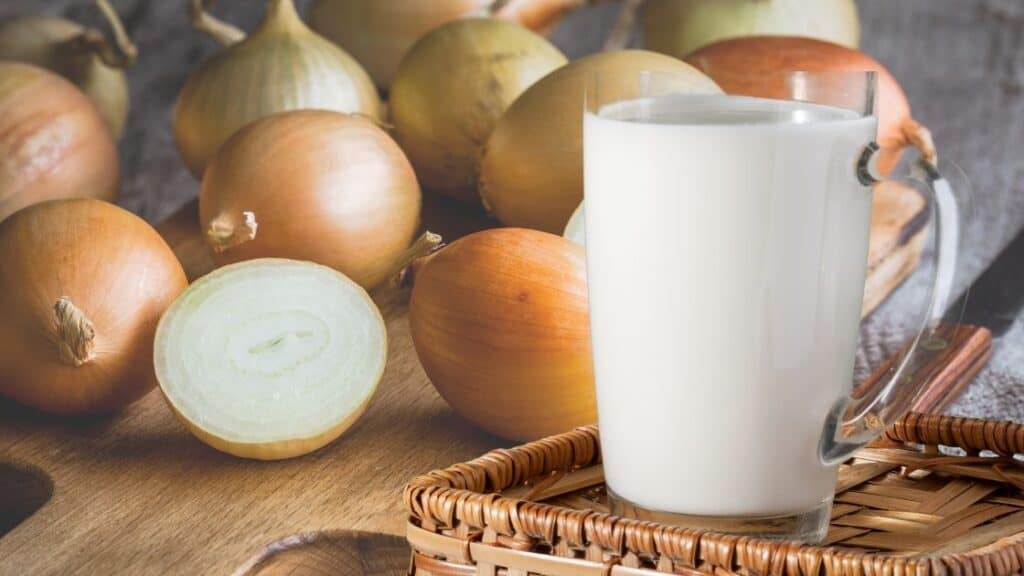 Milk contains a good amount of protein and calories, much more than onions have.

Here’s what happens when the two are mixed together and what milk does to onions.

Milk doesn’t do anything to onions.

Onions are slightly acidic but not enough to cause any chemical reaction with the milk.

Milk is commonly added to batter used in onion rings.

The milk in the batter helps bind the batter to the onion helping it to stay on, it also adds a creamy flavor.

Raw onions in particular have a very strong flavor to them, that can be very spicy and be difficult to eat.

This is more so the case for brown/yellow onions and white onions compared to red onions which are slightly sweeter.

The spicy, sour, strong flavor that onions have does give onions an acidic quality.

But, the acidity required to make milk curdle is much higher.

This needs to be the strength of limes or lemons or more.

Most lemons and limes are impossible to eat on their own because they are so acidic and sour.

When these acidic liquids are added to milk it separates the milk in curds and whey.

The curds are thick soft blogs of milk, and the whey is the mostly clear liquid.

The curds are then taken out of the liquid by pouring the liquid off, or scooping out the curds with a sieve-type utensil.

Here’s a good video that shows how cheese is made using lemon juice:

This is different to the way that butter is made, which is made by mixing whipped cream past the point where it turns into whipped cream.

Onions are not acidic enough to cause the same chemical reaction that occurs when lemon juice or other acidic liquids are added to milk.

Drinking milk with onions in it is quite an unusual combination.

Another similar combination is milk with tomatoes.

Tomatoes like onions have a sour taste which comes from the acid in tomatoes.

I explained how consuming milk with tomatoes affects your vitamin and mineral intake by looking at the nutrients in both in this article about milk and tomatoes.

Why milk is used in baking and other cooked dishes that include onions?

Milk is typically used in baked goods such as cakes, muffins, and bread.

The main reason that milk is used in baked goods is that it improves the texture, flavor, and appearance according to LiveStrong.com.

Using milk instead of water gives the crust a more golden color which looks better.

Most people really like drinking fresh milk on its own because of the taste.

The nice taste of milk also adds to the flavor of baked goods and other dishes made using milk such as puddings.

A common recipe with milk and onion is onion rings.

The batter used to make onion rings is also a similar recipe used to batter fish, and other fried foods.

When it’s used to make batter it adds flavor, and as it cooks it helps the batter stick to the food it’s coating.

What Is the White Liquid That Comes Out of an Onion?

If you’ve been using onions for some time you’ve likely never come across a white liquid that appears on the onion when you cut it.

You may be concerned that it is because the onion is bad. I looked into it and here’s what I found.

The white liquid that comes out of an onion is onion juice that occurs more in fresher onions, and some varieties of onions more than others.

Some onions produce barely any juice and only a small amount of clear juice when you cut them, but others produce a white liquid that looks similar to milk.

There is no cause for alarm if you see this white liquid come out of onions and it doesn’t indicate anything bad about the onion (source).

It’s a natural juice that is fine to consume. 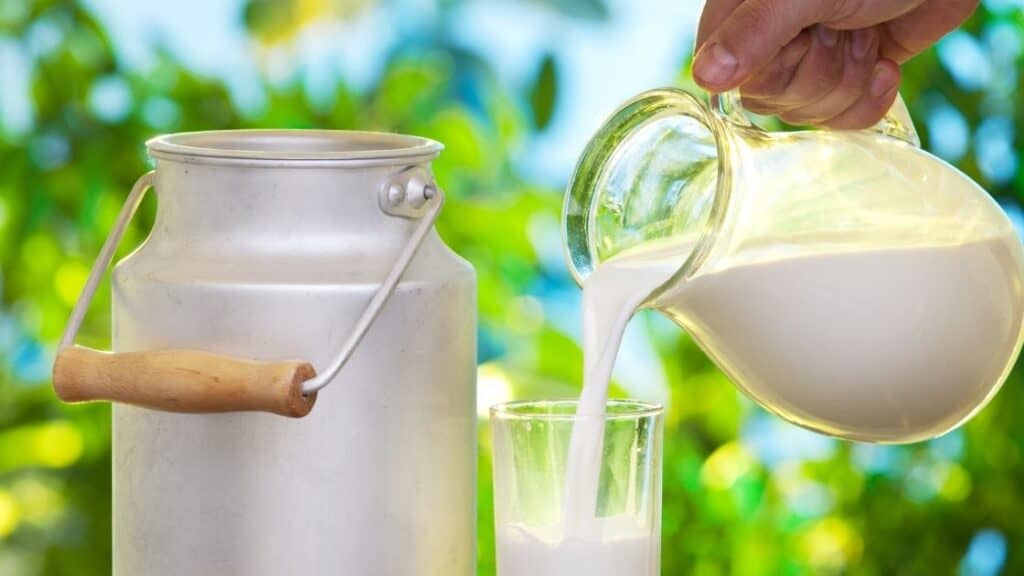 However, here’s whether it’s fine to consume it, or whether you should wash it off.

Onion milk is not bad.

It’s perfectly fine to leave it on the onion as you chop them, and you don’t need to wash it off prior to eating the onions.

It’s essentially just onion juice and there are no known negative effects caused by consuming it.

Some people claim that mixing onion, milk, and other additives like honey or garlic are a good health drink.

Apart from the fact that you can eat these foods separately in normal dishes that you would like to eat, are there any drawbacks to consuming onion milk, or onion and milk together?

Onion mixed with milk is not bad.

There are no known negative effects that occur from drinking milk and onions together.

But, most people are repulsed by the idea of drinking raw or cooked onions and milk as the two different textures feel funny in the mouth and don’t taste good.

There is another similar recipe called creamed onions which is made by cooking onions in butter.

In my opinion, the same results can be gained by cooking onions and then adding a small knob of butter to the plate.

Or put a small amount of butter on top of the onions and let them melt.

Onion powder is a way to preserve onions and some people prefer it because it’s more convenient than peeling and chopping onions.

It’s much easier to mix with liquids such as milk. Onion powder is a concentrated form of onions which I explained in this article about how much onion powder equals an onion.

However, it has an almost identical taste to cooked onions so won’t improve the taste of a drink that’s a mixture of milk and onion.

By onion milk, you might also mean the white liquid that comes out of onions.

Here’s what it is and whether it’s bad.