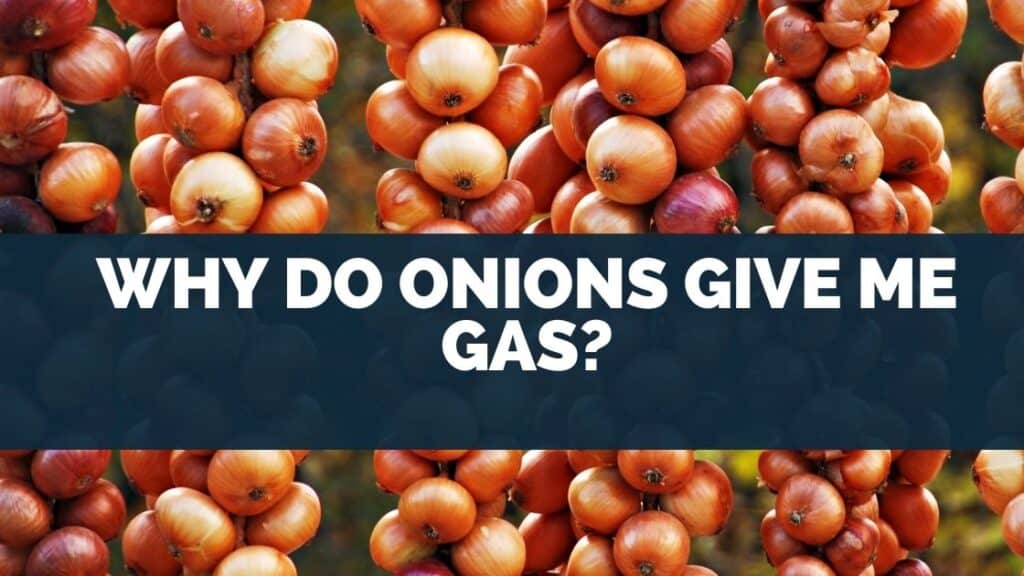 Most people can handle onions because it’s in almost everything.

If you get gas, diarrhoea, anxiety, and/or your stomach rumbles when you eat onions it’s likely you should avoid eating them altogether.

But, what exactly causes onions to give people gas?

Gas from onions is caused by an intolerance to onions.

Certain people are intolerant to onions which can give them a severe reaction or a very mild one.

A bit of gas from onions indicates you have a mild intolerance to onions, and likely other vegetables in the onion family such as leeks.

Once you get gas from onions, there are some ways to relieve it other than letting it run its course.

So, below I will explain how to avoid getting gas from onions, how to relieve gas once you get it, as well as, whether onions can cause acid reflux.

Go to top
Table Of Contents hide
1 How Do You Avoid Gas from Onions?
1.1 Using the process of elimination to narrow down the cause of gas
2 Can Onions Irritate Acid Reflux?
3 What Can I Eat to Relieve Gas?

How Do You Avoid Gas from Onions? 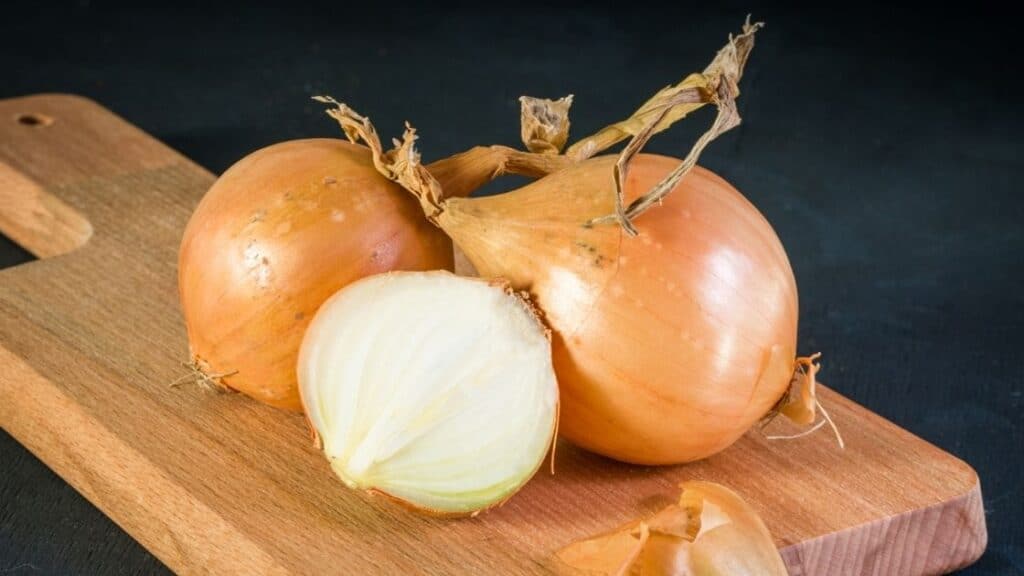 Having gas can be inconvenient to release, and to hold it in is quite painful.

So, it’s quite important to avoid gas where possible. Here’s how to avoid gas if you tend to get it from onions.

The best solution is to not eat onions.

Usually, if onions give you gas other vegetables in the onion family such as spring onions will also give you gas, so you should aim to avoid eating them as well.

In general, if you find you get gas from onions it typically means you have an intolerance.

This means regardless of other measures you take you will generally always get gas.

This is believed to be a genetic trait in some people, such as being intolerant to dairy, or allergic to peanuts.

While it isn’t very common, a small percentage of people do have it, and therefore need to avoid eating onions.

Or, only eat very small amounts.

However, it can also be the combination of onions with other foods.

A way to narrow down if this is the case is to use the process of elimination and a diary of what you ate and how you felt.

For example, when you notice you have gas write down what you ate.

Then next time try the same meal but remove one of the ingredients.

For example, if it’s a pizza with dough, tomato sauce, cheese, onions, and mushrooms.

Try eliminating the mushrooms and see if you get the same reaction.

Then continue with each ingredient until you can 100% say what the cause is.

Sometimes it can be necessary to substitute one ingredient for another because otherwise, the meat will not taste good.

Such as, if you don’t put tomato sauce on the base of the pizza it can not be nearly as appetizing.

In that case, you could use BBQ sauce on the base, or add a topping of mayonnaise or aioli depending on your flavor preferences.

Here’s a good video from nutritionist Kim D’Eon where she explains the main reasons people get excessive gas:

Dr. James Church (MD) from the Cleveland Clinic, states that everyone produces gas, and the volume of gas that the human body produces is influenced by 2 factors:

He states the amount of gas can vary a lot based on what you eat, and the kinds of bacteria are in your colon.

Unlike well-known culprits such as beans.

Therefore, if you do get gas from onions it’s definitely caused by the unique bacteria in your colon, which is genetic and not something you can control.

They have different percentages of nutrients, so you may find only one specific type of onion triggers it.

And eating the other types doesn’t give you gas at all.

For example, you may find eating brown onions gives you gas, but red onions don’t give you gas at all.

I also examined how many carbs are in the different types of onions, and vegetables in the onion family such as leeks and shallots.

You can read all about it in this article about white onions vs red onions. 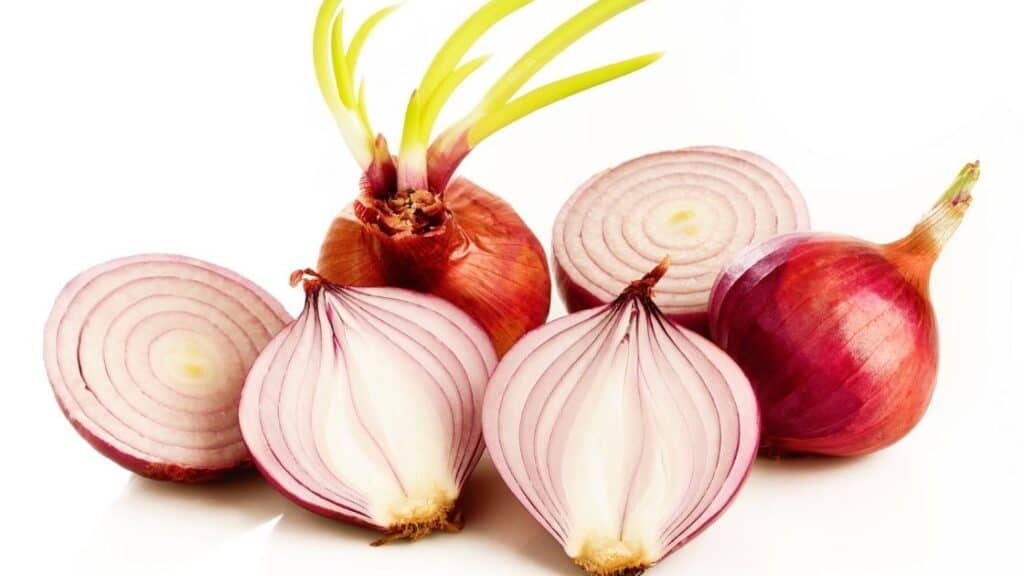 Another issue with certain foods is acid reflux.

Acid reflux can be alleviated once it occurs by drinking certain common formulas designed for it.

However, are onions known to make acid reflux worse?

Onions can irritate acid reflux, and many people find they are a trigger for acid reflux.

But, it doesn’t irritate or trigger acid reflux in all people.

Therefore, it may affect you differently.

Some people find that raw onions cause acid reflux but cooked onions don’t.

Others also find that other vegetables in the onion family don’t cause acid reflux and it’s only onions in particular.

So, you could flavor your dishes with other vegetables in the onion family that have a very similar taste such as garlic, or leeks.

There are some vegetables in the onion family that are quite common such as garlic which virtually everyone has heard of.

But, others are a bit more confusing such as scallions which are also called green onions, and spring onions.

Many people wonder what the difference is between them, and how the flavor differs from that of a normal onion.

I explained the flavor of each, and ranked them based on how strong of an onion flavor they have in this article about whether leeks are onions.

What Can I Eat to Relieve Gas? 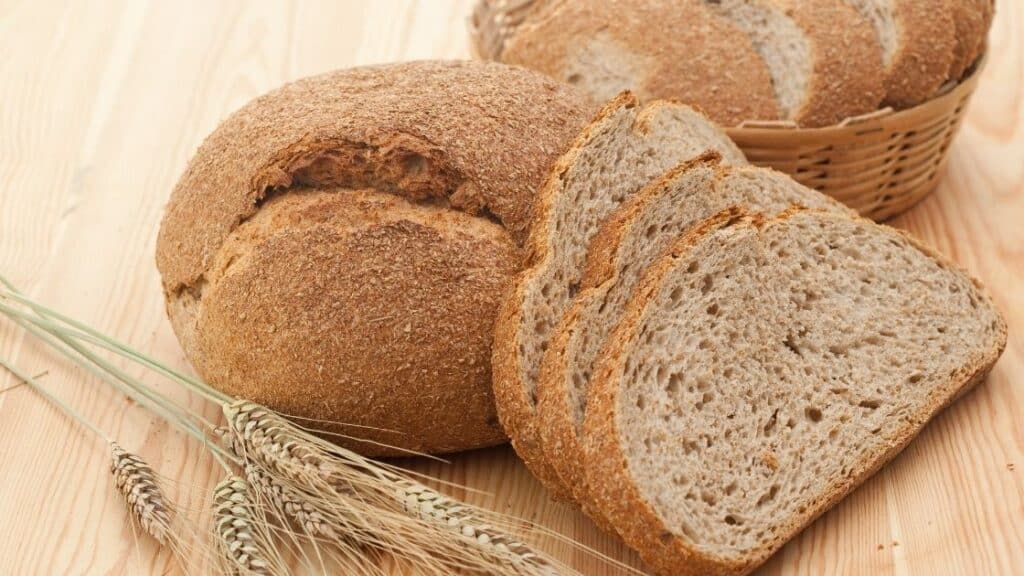 There are certain foods that greatly increase how much gas your body produces.

There are also some that produce much less gas when eaten so you can substitute these for foods you typically eat if you’re going to eat onions.

Here’s what they are:

Whole wheat bread, brown rice, water, and steamed foods are the best to reduce the amount of gas you produce according to Gastroenterology Healthcare Associates.

Eating these when you have gas will also reduce the production of more gas.

But, there is no way to relieve gas other than passing wind.

Peppermint and chamomile tea are also good remedies for gas.

If it’s a consistent issue then you may want to consider getting a digestive enzyme.

These are available over the counter, and if these don’t solve the issue, then you should consult with a gastroenterologist to identify the cause of the issue.