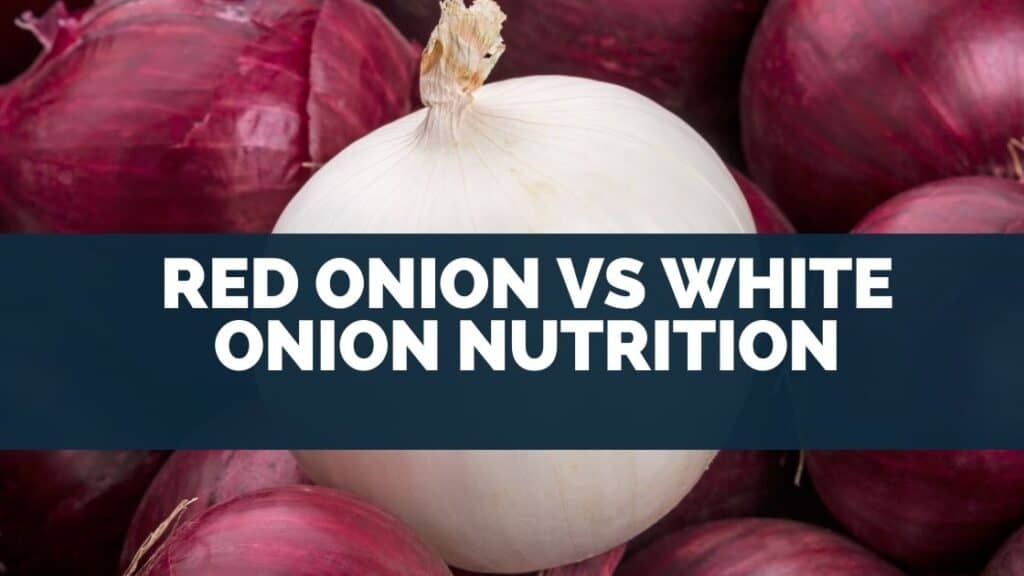 There are three types of onions commonly found in stores and they each have a slightly unique flavor profile.

Some types of onions are more common in certain towns and cities, whereas others generally aren’t sold as much.

In this article, I will explain the difference in nutrients between red and white onions.

On average, white onions have 70% of the nutrients that red onions have.

But, white onions have the same amount of iron and twice the calcium of red onions.

All of the other nutrients found in white onions are significantly lower than in red onions.

Below I will cover how many carbs are in red onions, and compare them to white onions.

As well as, show a table that does a side-by-side comparison between the nutrients found in red and white onions.

After that, I will cover whether these red and white onions are good for the keto diet.

Go to top
Table Of Contents show
1 How Many Carbs Are in a Raw Red Onion?
2 Red Onion Carbs Keto
3 Keto Onion Substitute

How Many Carbs Are in a Raw Red Onion? 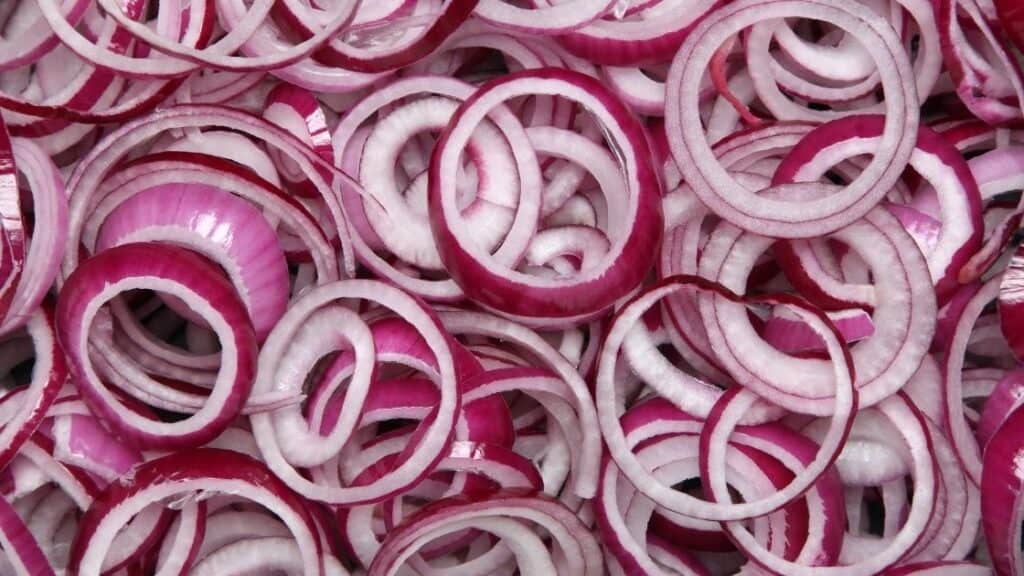 A low-carb diet is generally considered good for weight loss. Most vegetables are low in carbs.

But, are red onions low in carbs?

One medium sized raw red onion contains 20g of carbs, or 7% of the recommended daily intake of carbs. A low carb diet is one where 100g to 150g of carbs are consumed in a day.

Therefore, one raw red onion contains 20% to 30% of the recommended daily intake of carbs per day on a low-carb diet.

Therefore, white onions are a better substitute for red onions if you’re needing to keep your carbs down.

The nutrients found in white and red onions are quite a bit different though.

Therefore, based on the overall nutrients red onions are a better option.

Here’s a table that shows a side by side comparison between white onions and red onions:

The percentages are the percent of the recommended daily intake of each nutrient.

As can be seen in the table red onions generally have 1% to 2% more of the recommended daily intake of each nutrient.

The exceptions are iron and calcium.

Therefore, you get more ‘bang for your buck’ if you eat red onions instead of red onions.

The onion family contains many different kinds of vegetables that can be quite similar to onions but some also don’t grow a bulb.

I provided a detailed list of the major difference between the different kinds of vegetables in the onion family:

In this article about whether leeks are onions.

Many of them are very similar in shape and size, whereas, others are quite different. 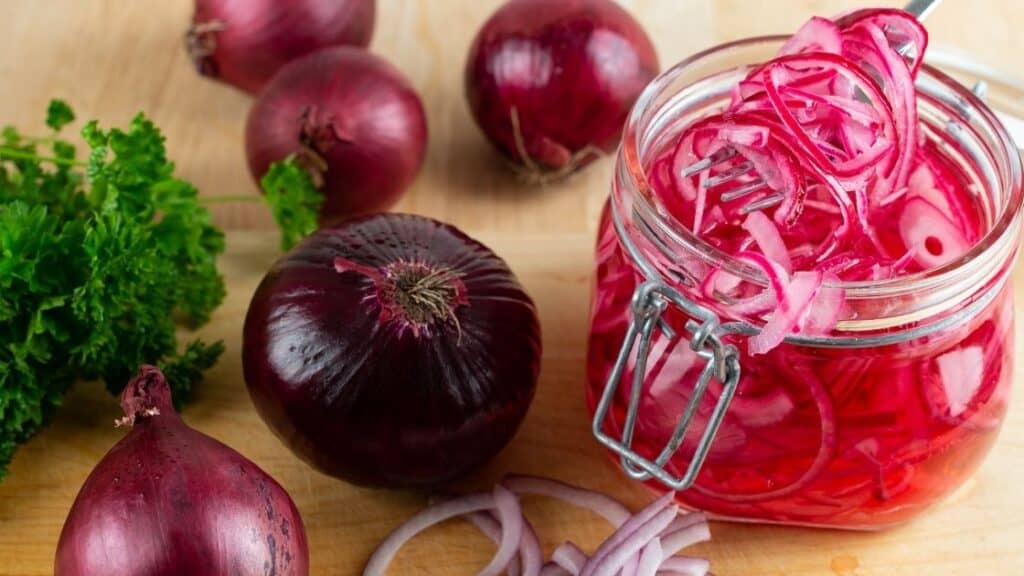 The ketogenic diet is good for people who have a low tolerance to gluten.

It also can be good for some people to help lose weight and can make people feel better overall.

Various foods can be keto or not depending on how many carbs they contain, so here’s how red onions fit into a keto diet.

Red onions are perfectly fine on a keto diet.

To maintain ketosis the number of carbs you consume in a day should generally be below 50g.

Therefore, you do need to be careful about how much red onion you eat on the keto diet.

In general red onions are used in salads, sandwiches, and fried.

These ways of using red onions generally use about half to a quarter of a medium-sized red onion.

Therefore, this would contribute 5g to 10g of carbs to your diet.

Which is 10% to 20% of the total carbs you should consume on a ketogenic diet.

Based on these numbers red onions fit in well on a ketogenic diet.

Therefore, white onions are a good way to fit in more carbs on the keto diet.

The one drawback is that white onions contain on average 30% more essential minerals than red onions.

Therefore, if you’re not finding it difficult to keep your carbs down, red onions are a better option.

As you may know plants with bulbs like onions can produce multiple bulbs that can be separated to produce new plants.

Which can then be propagated to produce more and more of them.

Many people wonder how onions are grown and whether they produce seeds.

I explained the answer to this question in this article about whether onions have seeds. 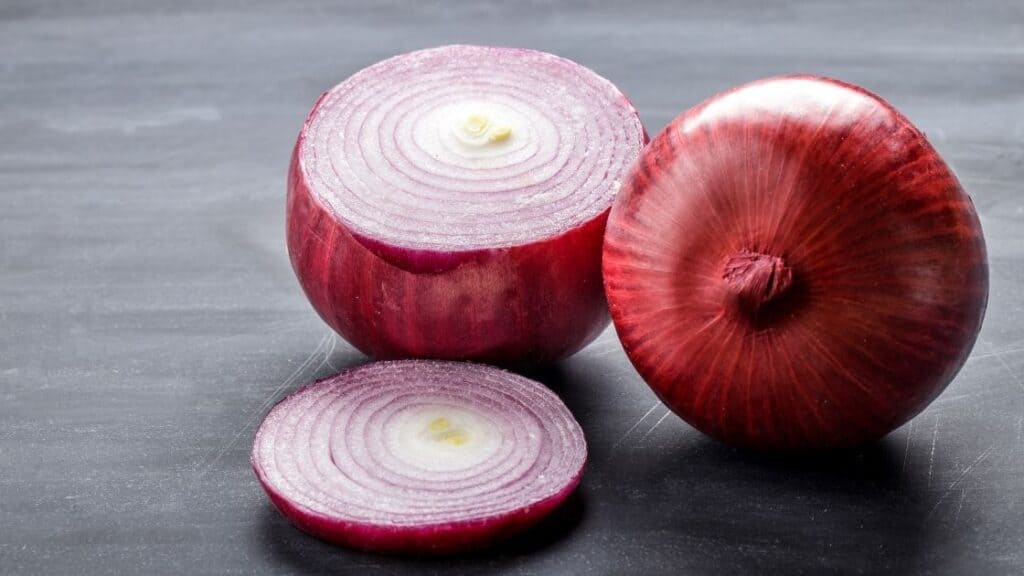 Each type of food has a different amount of carbs.

Onions contain a medium amount of carbs so I’ll explain if there is a better substitute for onions for the keto diet.

Scallions which are also called green onions contain the lowest amount of carbs in the onion family.

However, the difference in carbs between onions and scallions is only 5%, only a mere 0.4g per average serving size.

Therefore, onions are the best option in the onion family for low carbs.

The taste of onions is very unique.

Most of the vegetables in the onion family have this characteristic savory/spicy flavor.

Here’s a table that shows the number of carbs in each of the different onions in the onion family in order from the lowest to highest carbs:

There is a large difference between the carbs in onions, leeks, and shallots.

However, the difference between the vegetable in the onion family that has the lowest carbs – scallions and onions both red and white – is quite small.

Therefore, onions are about the best option to add that kind of flavor to a keto diet.

Because there is only a very small difference between onions and scallions.

There is also a very small difference in the carbs between white and red onions.

Red onions have more nutrients than white onions, therefore, they are a better option overall.

However, because of the large difference in carbs in leeks and shallots, they should be your last option when planning out the number of carbs you’re going to eat on the keto diet.

To get a very clear picture of exactly how many carbs you’ll consume, and whether you should consider cutting out leeks or shallots from your diet requires you to put together a spreadsheet of all the foods you eat, and the number of carbs in each.

When you’re getting close to the upper limit of carbs on a ketogenic diet, then it may be necessary to swap out leeks or shallots in a recipe that calls for them.

And use onions or scallions (green onions) instead.