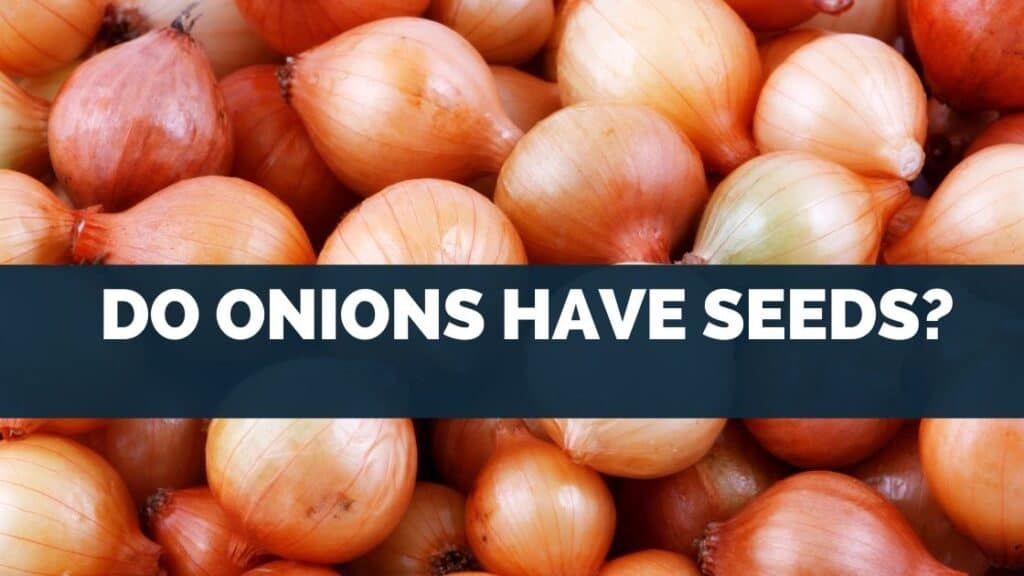 Onions are the bulb of the onion plant.

However, onions are very easy to find in stores year round.

Therefore, many people haven’t yet grown their own onions and are curious whether onions have seeds.

Onions do have seeds.

Under normal conditions onions will produce a flower that contains seeds after 2 years.

Once it first begins to bud and produce a flower it needs to be harvested immediately.

If it’s left to flower full the onion will shrink.

If you’ve never grown onions it’s surprising to know they produce a long stem about 2 to 3 feet (1 meter) high, that produces a flower about the size of your palm.

In this article I will explain more about where onion seeds come from, and whether onion seeds are edible.

Go to top
Table Of Contents show
1 Where Do Onion Seeds Come From?
1.1 Onion bulbs only come from seeds
1.2 Black onion seeds are not onion seeds
2 Can Onion Seeds Be Used in Cooking?
3 Are Onion Seeds Edible?

Where Do Onion Seeds Come From? 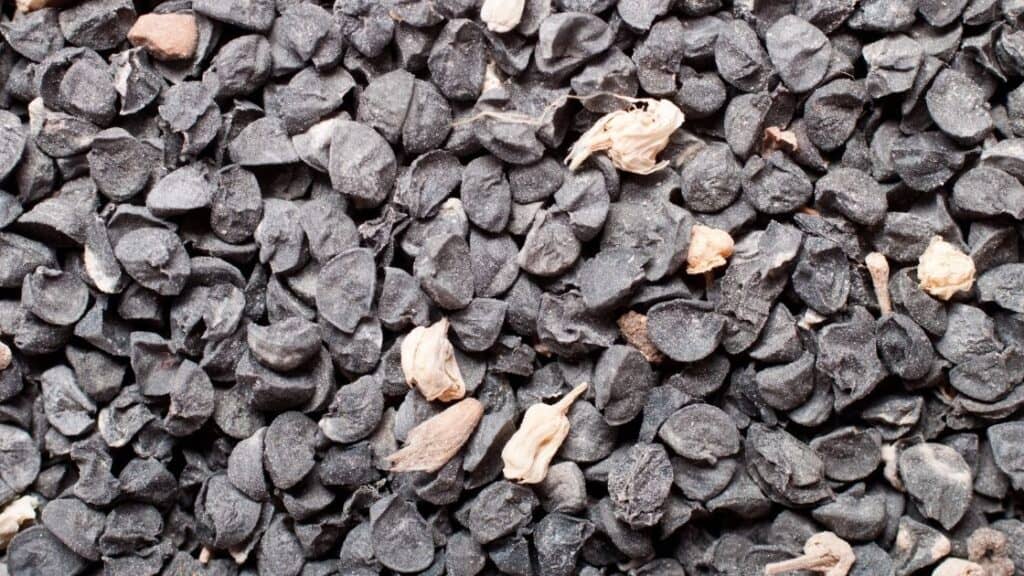 Onion seeds are small and black in color.

Because they can also be grown from bulbs you may be wondering where onion seeds come from, here’s what I found.

Onion seeds come from the flower of the onion plant.

Onions will typically flower after 2 years.

Onions will also begin to flower if the temperature fluctuates a lot.

But, this is not preferred because when an onion flower it needs to be harvested immediately.

Which results in a smaller onion.

Onion seeds are about the size of capsicum seeds or chili flakes. Ideally, onions will grow to a large size and won’t flower for 2 years.

Onions are known as biennial plants, which means when a seed is planted it won’t produce flowers that produce seeds for 2 years.

Here’s a video that shows what the flowers look like, and how to harvest the seeds:

Once the flower has fully grown, you can inspect it to see if the seeds have turned black by opening one of the tiny flowers that make up the much bigger flower.

If the seeds are black then it’s ready for the seeds to be harvested.

To harvest the seeds

Onions can be harvested earlier than when they produce a large bulb.

They can be harvested when they are the size of green onions/spring onions.

They can also be harvested when they are small.

Smaller bulbs can be harvested at some time in the first year and kept in a cool dry place.

These can then be planted in the following season and grown into a full-sized onion.

This is one of the easiest ways to grow onions.

Most people report that growing onions from seeds is generally the most difficult.

And it works best if you plant them in seed trays.

Once they have grown about the size of a finger, they should be planted into pots or the soil.

As the onion bulb grows the top ¼ sits above the soil, where it pushes aside the soil as it grows bigger.

Onion bulbs only come from seeds

Certain types of plants produce suckers or produce a few bulbs all clustered together that can be separated and planted to produce new plants.

However, this is not the case with onions.

The only way to get new onion plants is to plant new seeds.

If an onion hasn’t flowered yet the leaves can be cut off and can be used in cooking like green onions.

The shoots will regrow again and again.

Leeks, green onions/spring onions, shallots, and onions all have very similar-looking shoots and grow from a bulb.

So, you may be curious whether leeks are a type of onion or if they come from the onion plant.

I discussed this in detail by looking at the scientific classification of each plant in this article that explains if leeks are onions.

When onion seeds are mature and ready to be collected they turn black.

This is when the flower should be cut and dried to collect the onion seeds for storage and to be planted to produce new onion plants.

But, interestingly you can find black onion seeds for sale at grocery and vegetable stores.

Where they are packaged like spices such as cinnamon, paprika, and cumin seeds.

Black onion seeds that you buy from food shops are NOT in fact the seeds of the onion plant.

But, are instead collected from a plant known as Nigella Sativa, and are also often called Nigella.

They are almost identical in appearance to onion seeds which is likely why they are named as such.

Can Onion Seeds Be Used in Cooking? 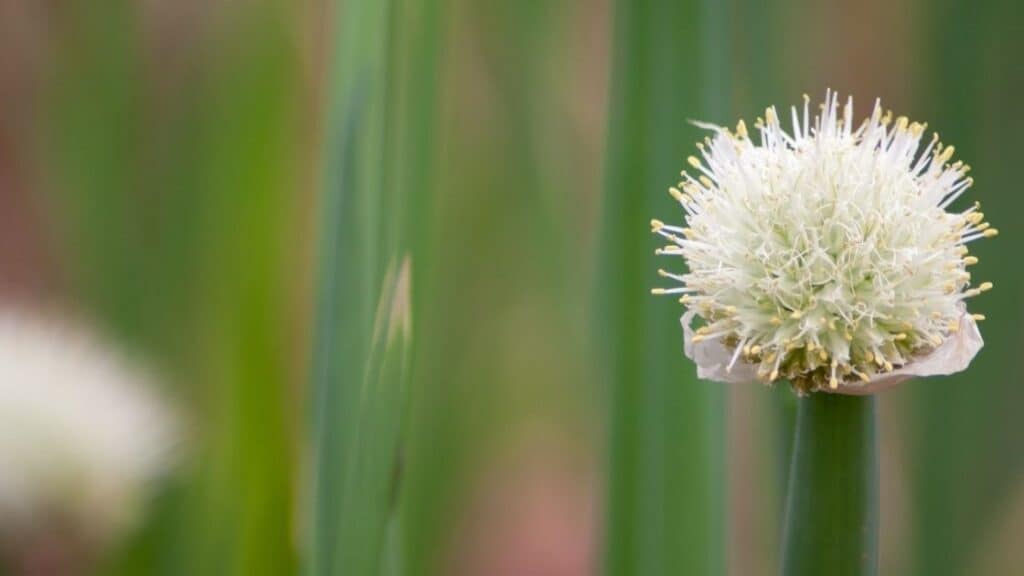 One onion flower produces around a hundred onion seeds.

Most parts of plants are edible, and many seeds are also used as a spice or are high in nutrients.

But, can onion seeds be used in cooking?

In grocery stores, black onion seeds are often sold and are used as a spice.

However, these are cumin seeds that have been renamed and are not the seeds of the onion plant.

They are also called nigella seeds and are frequently used in cooking.

Many people report that eating onion seeds is perfectly fine.

And people don’t get sick from eating them.

However, there are no scientific studies on the effects of eating onion seeds from the onion plant.

Therefore, it’s best to err on the side of caution and not consume them. 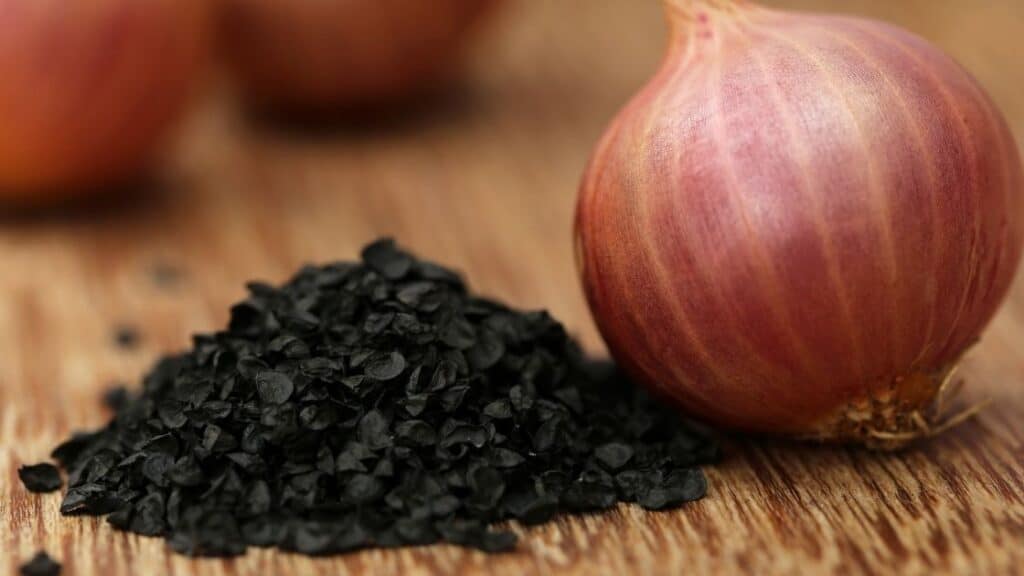 Many types of seeds are edible and add spice or a strong flavor to food.

Onion seeds are not edible.

There is a seed of a plant which is called black onion seeds that are used as a spice.

However, these are misnamed and don’t come from the onion plant.

These are in fact cumin seeds, which are also called nigella seeds.

They are the seeds of the Nigella sativa plant.

Interestingly, there is no information available about whether seeds of the onion plant are edible.

However, it’s widely known that onion flowers are edible.

However, most people find they aren’t that delicious.

In stores, you can find black onion seeds for sale but these are in fact cumin seeds.

Onion seeds come from the plant which has the botanical name Allium cepa.

As you may know, cumin seeds are regularly used in cooking.

Cumin seeds are generally lightly fried without oil in a pan or baked for a short amount of time in the oven to bring out the essential oils and give them a more delicious flavor.

You may be wondering whether it’s OK to eat cumin seeds raw.

I explained the answer to this question, as well as a breakdown of the nutrients found in cumin seeds and whether they’re good for you in this article about whether you can eat cumin seeds raw.