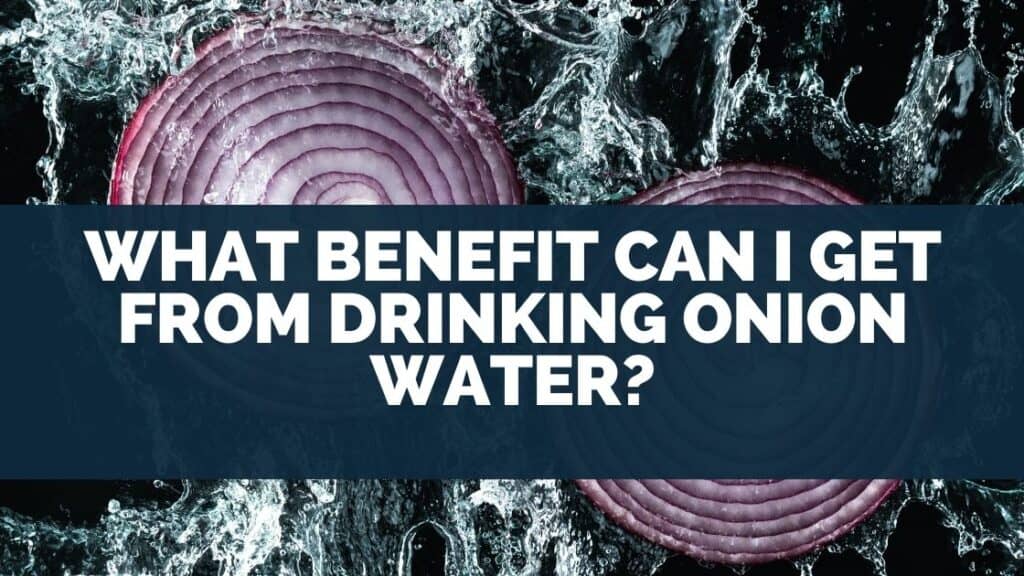 When you boil vegetables such as onion it’s commonly believed that some of the nutrients are removed and remain in the water that’s leftover after boiling them.

In this article, I will look specifically at the water left over after boiling onions or onions soaked in water.

Here are the benefits you can get from drinking onion water.

In total, this accounts for about 4% of the recommended daily intake of each of these nutrients which are: vitamin C, vitamin B6, vitamin B12, thiamine, riboflavin, niacin, pantothenic acid, biotin, folic acid.

This is not a very significant amount of nutrients and whether you drink onion water or not will only have a minor effect on your intake of beneficial nutrients.

Below, I will provide data showing how the nutrients differ between raw, and boiled onions.

As well as, discuss the healthiest way to cook onions.

Go to top
Table Of Contents hide
1 What Does Boiled Onion Water Do to the Body?
2 What Is the Healthiest Way to Cook Onions?
3 Can You Boil Onions?
3.1 How To Boil Onions
4 How Do You Make Onion Water?

What Does Boiled Onion Water Do to the Body? 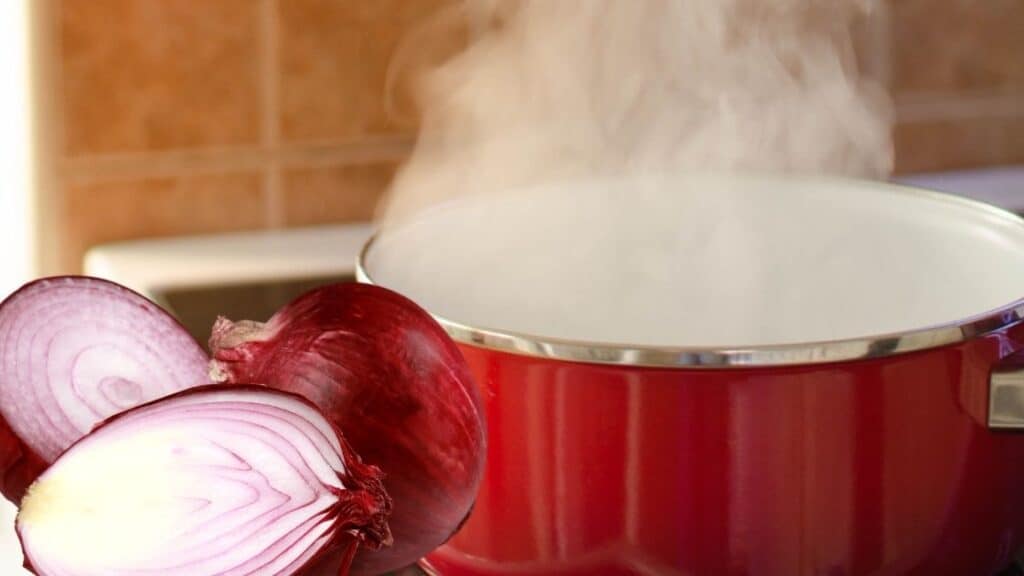 The leftover water after boiling onions is slightly discolored and contains some beneficial nutrients that were present in the onion.

Here’s the effects are of onion water on the body.

Boiled onion water provides 4% total of the recommended daily intake (RDI) of the beneficial water-soluble vitamins which play a key role in bodily processes such as your immune system, and cell repair and growth.

The very high water content also contributes to your RDI of water.

For example, if you drink 1 cup of boiled onion water it will contribute 1 cup to the recommended amount of water which for an average person is around 8 cups.

According to the University of Michigan, the water-soluble vitamins are:

Other scientists also state that about 50% to 60% of the water-soluble vitamins found in foods are lost to the water when they’re boiled.

Because this is an average I looked at how the vitamins and minerals change in onions specifically by comparing raw onions to boiled onions.

Here’s a table that shows the results for the water-soluble vitamins and minerals:

On that table, I also provided a calculation of the difference in these vitamins.

Boiled onions contain 84% of the water-soluble minerals that raw onions have.

This shows that 16% of the water-soluble minerals are lost.

This is not much for onions and shows that onions aren’t affected much by boiling.

The total vitamins lost by boiling only account for 4% total of all the water-soluble vitamins found in onions.

This is such a small number that it makes virtually no difference if you boil onions or eat them raw – quite a surprising finding.

Because this result seemed a bit at odds with what I thought would be the case, I took a look at all the nutrients found in onions and compared raw onions to boiled onions.

The results are shown in the table below:

Onions keep for a long time in the pantry but over time they can develop mold.

I researched whether you can eat an onion that has mold on it and summarized it in this article about whether mold on onions is dangerous.

What Is the Healthiest Way to Cook Onions? 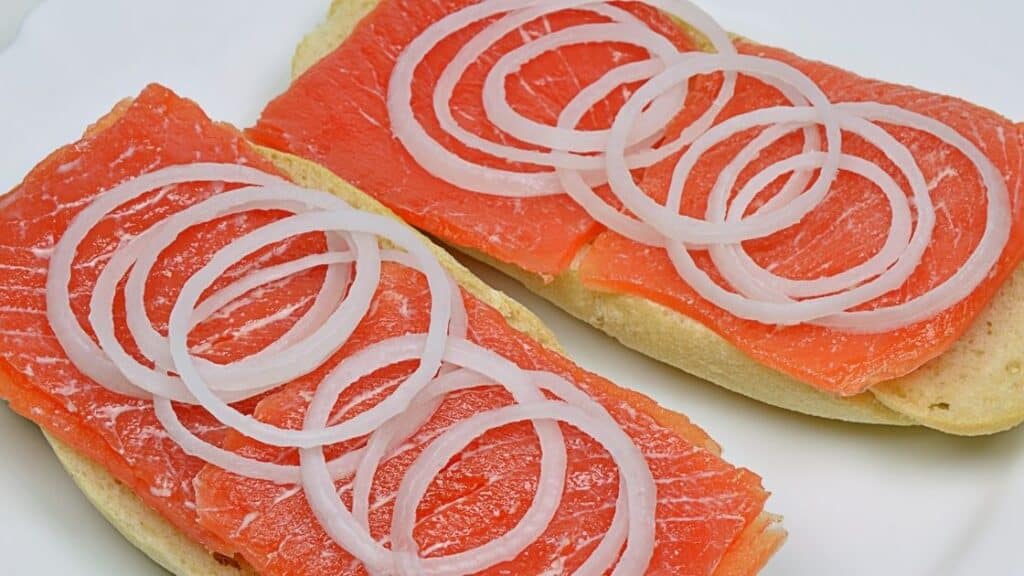 Onions can be consumed raw in sandwiches and salads in small amounts, but the most common way is to lightly fry them to turn them a golden color.

They can also be boiled or pickled.

I looked into the healthiest method to cook onions, and here’s what I found.

The healthiest way to cook onions is to saue (lightly fry) them.

This gives onions the most amount nutrients.

The next best way is to boil them, followed by eating them raw.

However, the difference between boiling them and eating them raw is only very slight.

I’ve made a table below that shows a side-by-side comparison of raw, boiled, and sauteed onions, the row to look at is the bottom row which shows the total of each type of cooking method.

There are three main types of onions, the most common in most regions are yellow/brown onions and red onions.

Yellow/brown onions are the type of onions that have light brown skin with yellow to white flesh.

Red onions are easy to identify by their purple flesh.

The least common in most regions are white onions that have a white peel.

Each type of onion has a slightly different amount of nutrients, for example, red onions are slightly sweet compared to brown onions, and this is because they have more sugar.

I did a comparison of the nutrients in red and white onions so you can see which ones are the healthiest in this article about red vs white onion nutrition.

Can You Boil Onions? 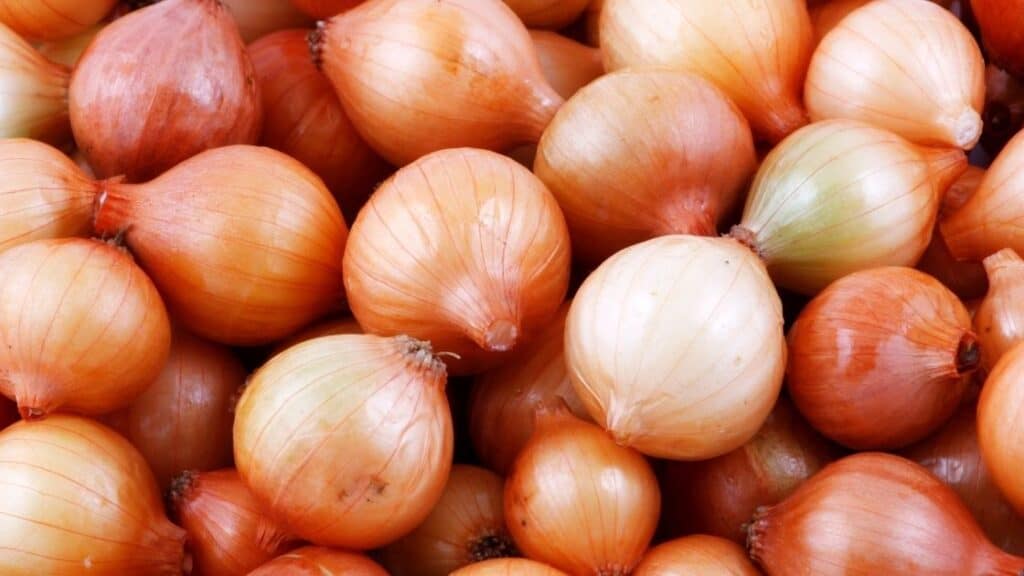 Boiling onions is not a common way to prepare them because they have a strong taste.

The strong taste means they are only really good in small amounts, and so they aren’t consumed in big portions like potatoes or sweet potatoes.

So, is it a good idea to boil onions?

Boiling onions is fine to do, but not very common.

The strong flavor of onions means only a small amount of onions tastes good with other foods.

So, after boiling them you will need to cut them.

But, boiling cut onions makes the layers of onion separate into individual pieces.

Although onions have a strong flavor most people really like the flavor of onions.

When you boil onions some of the flavors are lost.

If you don’t like the strong flavor of onions, boiling them is a really good option.

Also, if you boil them whole, generally only the outer layer will lose some of its flavors to the water.

Here’s a really good video that shows how to boil onions:

How To Boil Onions

How Do You Make Onion Water? 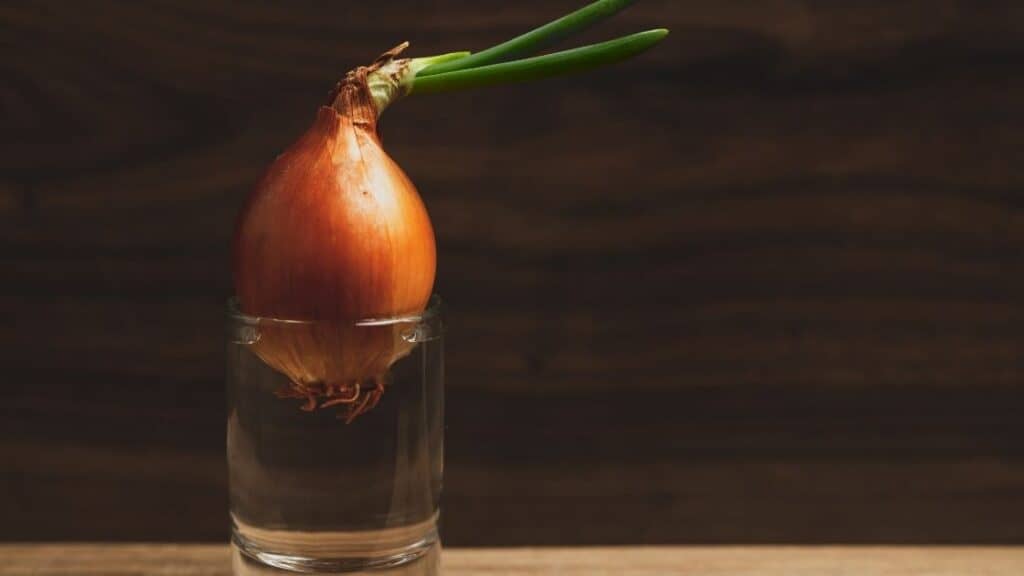 Onions are spicy tasting vegetables similar to garlic, and ginger.

Because of the extra spiciness, some people have claimed it has some health effects.

So if you’re interested in making onion water here’s how it’s done.

Onion water is made by soaking onions in water or by collecting the water from boiled onions.

The fastest method is to collect the water from boiled onions.

Soaking onions in water should be done for 12 hours or more.

The same effect of soaking onions or collecting the boiled water can be achieved by juicing onions and diluting it with water.

Onions can be diced finely and crushed in a pestle and mortar and then put through a sieve to extract the juice.

Onions can also be put into a blender and then squeezed in a cheesecloth or put into a sieve to extract the juice.