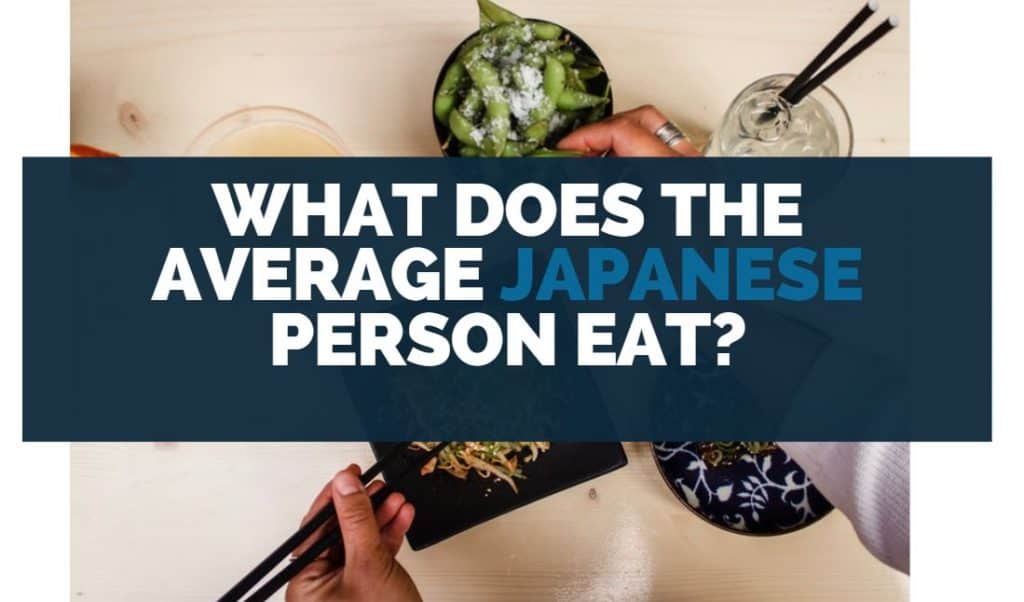 Japan is one of the healthiest nations in the world, with a high life expectancy, general good health, and low obesity rates. So what are they putting into their bodies that help them maintain such health?

What does the average Japanese Person Eat?

In short, the average Japanese person eats a diet high in antioxidants and omega 3s and mostly made of whole foods. It’s low in fat and sugars. Common foods in their diet would include rice, noodles, fish, and tofu.

It is not any type of magic tea or exercise routine that keeps this nation consistently healthy with long life expectancies. It is, however, primarily based in being balanced in the kitchen.

People who are at a medically healthy weight may seem like they just eat less than those who weigh more or are obese, but Japan and its citizens prove that wrong. Japanese citizens eat what they want, but in healthy ratios to each other.

They are mindful of food and what their bodies need.

For the Japanese, it is all about portion awareness and being in tune with what the body needs. And these ideals are supported by society and the government. Healthy, good food is easily obtained as well as education on what kinds of food are important.

What Are People In Japan So Healthy

Children grow up understanding how balanced meals work, and then carry that information with them into their adult lives, raising their own children with a healthy relationship to food.

Japanese cuisine is full of foods and dishes that incorporate fermented components, anti-oxidants, omega 3’s, and clean eating. All of these factors can lead to incredibly healthy bodies. Fermented foods are known to fight bacteria while omega 3s support brain function and growth.

While their diets are high in the qualities listed above, they are also low in sugar, saturated fats, preservatives, and processed ingredients, which help their bodies digest and absorb calories with peak efficiency.

How Many Meals do the Japanese Eat a Day?

The majority (95%) of Japanese people typically eat three meals a day, like most countries.

If a large meal is eaten during one mealtime, smaller or lighter meals throughout the rest of the day compensate for its heaviness.

The most popular breakfast in Japan is steamed white rice, sometimes prepared in a porridge-like way for children, although adults enjoy it too. It is often served with sides of pickled plums and vegetables or shiso leaves.

Protein is an important part of the Japanese diet, and fish is typically incorporated into breakfast.

Poultry used in a rolled omelet called a tamagoyaki is also a popular choice.

Both are high in bacteria-fighting ingredients that help keep the immune system flourishing.

Green tea is also a popular choice during any mealtime, or just during the day.

Green tea has been proven to increase metabolism and is healthier than coffee. Green tea is often drunk straight, with no creamer, dairy, or sugar put in so it does not have the same effect on the body as coffee.

Bento boxes are styles of lunch boxes with different sections of food. They usually have a protein, vegetables or fruits, rice or noodles and maybe soup. These are often served in schools or taken on trips.

Japanese schools that provide lunch ensure that the students are eating balanced and healthy meals, which help to educate children on healthy food habits that they can use later in life.

All students from various backgrounds or wealth levels have access to healthy and fresh food in school lunches, which is not the case in America.

The most important meal for Japanese folks is dinner, with 95% of a survey responding that they liked dinner the best.

80% of Japanese people eat at home, with their families. Dinner is considered a social time for families to reconnect after the day, share stories, and bond over a meal.

There is a large gender disparity in who cooks the meal, with 84% of women surveyed responding that they cook dinner, while only 14% of men said they prepared the meal. This type of gendered task can be seen around the world, where women take up the responsibility of meal planning and cooking.

Restaurants utilize the same fresh and beneficial ingredients as people who cook their own food do. Everything in the majority of Japanese restaurants is prepared to order, which ensures all the good-for-you ingredients are still fresh and ready to go.

Eating alone is not a popular way to spend a meal, so folks who have not started a family yet, live alone, or are traveling will gather with friends to eat dinner.

How Many Calories Does the Average Japanese Person Eat a Day? 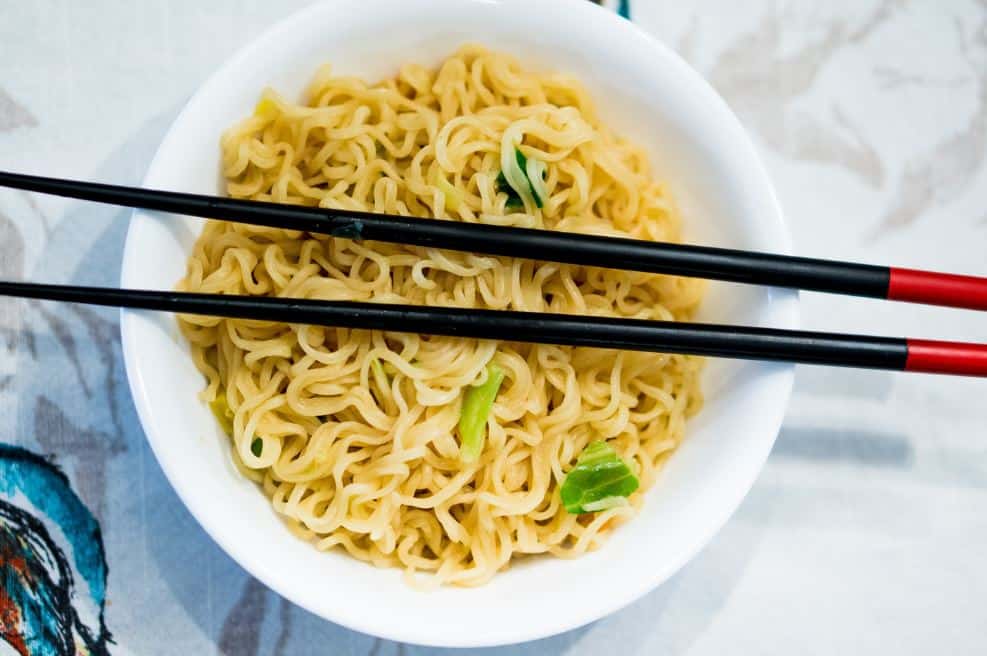 The average number of calories eaten a day by an average Japanese person (1-85 years old) evens out around 1,930.

For comparison, the same age group in the United States consumes about 2,168 calories per day.

A survey (2002) of United States citizens ages 20 and up reported 32% of participants with a BMI (Body mass index) over 30, which is clinically obese. The obesity rate of Japanese citizens aged 15 and up was 3.6%.

Although the calorie intake does not appear to be so different, the type of food consumed is. Americans typically do not eat in all four food groups and unhealthy food is often cheaper, and easier to access than healthy, fresh produce.

Japan has fresh produce available to a wider population, as well as healthier school lunches. Japanese people keep balanced diets that promote their bodies to burn calories in a more efficient manner, keeping a healthy weight.

In addition to healthier options when it comes to caloric intake, Japanese people will often walk or ride a bike instead of driving. Many Japanese live far more active lives than American citizens, which could also contribute to the lower levels of overweight and obese people in Japan.

How Much Rice Does the Average Japanese Person Eat a Day?

You may be surprised to hear that even though Japan is a nation that eats rice daily, it ranks 50th on the list of countries that consume the most rice per day.

But, rice is still a staple in Japanese cuisine. It is served as both a main dish and a side dish and is a very versatile grain. It is used in soups, desserts, and snacks and has been used for centuries by the Japanese.

What Portion Size do the Japanese Use? 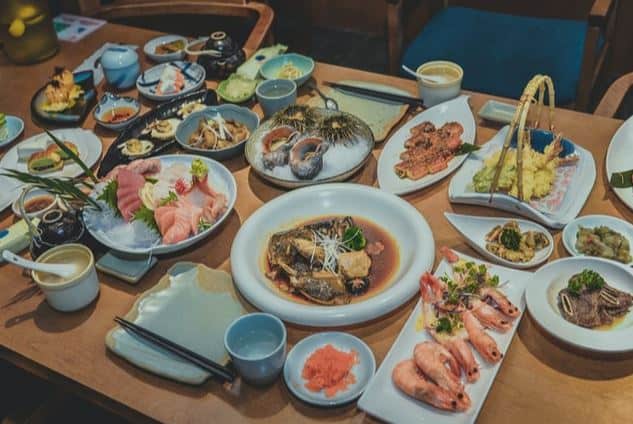 Japanese portion sizes vary according to the food being served. A typical serving of rice is approximately 140 grams and 240 calories while a bowl of ramen can be much larger and range from 400-1000 calories.

Rather than have only food portions, meal portions are used. If a large breakfast is eaten, then a lighter lunch and smaller dinner are usually the ratios.

By balancing the amount of food in a meal, Japanese people are able to control how much food is consumed in a day in a very rational way.

In Okinawa, home to the women with the longest life expectancy in the world, a mantra is spoken before meals to remind the body to eat until they feel 80% full, rather than 100%.

Eating to 80% helps the body digest faster which can promote a faster metabolism, which in turn, helps digest food more efficiently.

Portion size is also heavily based on self-awareness. Japanese people have a skill for being aware of how their body feels during meals, and unlike some other cultures, they can recognize that they are feeling satisfied and stop eating.

Health, longevity, and productivity are all aspects of Japanese culture that carry over into their diet and dining habits.

The majority of the country acknowledges meals and eating as a way to fuel their bodies and not something to do when they are bored, or because it tastes good.

Japan has consistently raised children who understand food and its importance to life and satisfaction, without encouraging the instant gratification of impulse eating or eating simply to taste it.

Japanese citizens are careful in their meal plans and take care of what they put into their bodies. The low obesity rates and low consumption of processed foods speak for themselves when faced with the question of the health of a population.

Japan has consistently proved itself to be a powerhouse in the health world, and it can be credited to its cuisine and the thought that goes into preparing food and meals.