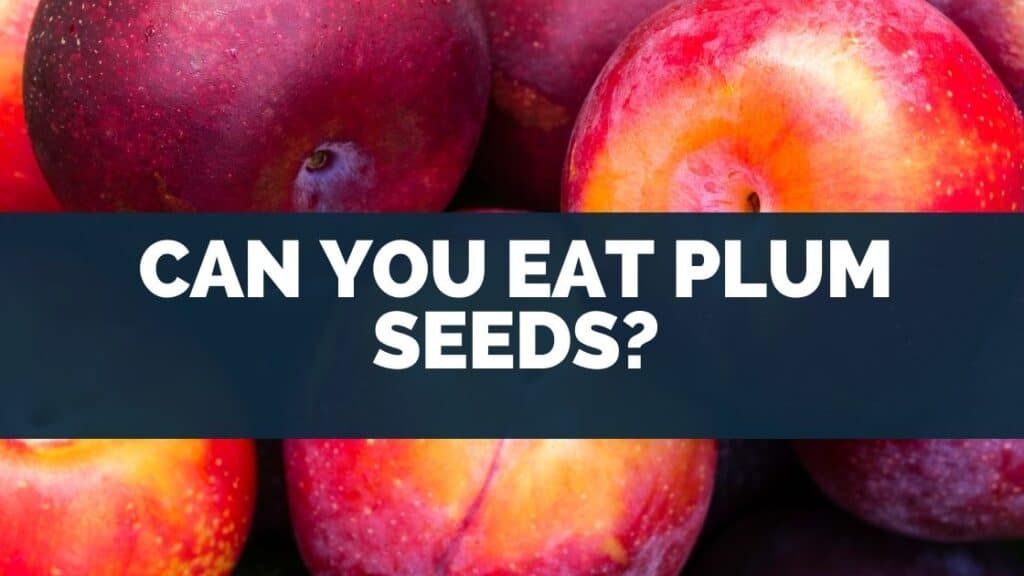 No, you should avoid consumption although eating a few unintentionally won’t cause any major harm.

Plum seeds contain amygdalin which turns into hydrogen cyanide in the body, this is poisonous and can cause severe side effects in large amounts.

You should certainly avoid chewing or crushing plum seeds or blending them.

This is because the seeds of stone fruits which include plums, peaches, and apricots contain amygdalin.

This compound turns into hydrogen cyanide when eaten.

Hydrogen cyanide is poisonous and can cause major harm.

You shouldn’t worry too much however as you will need to consume a lot of plum seeds for a toxic amount of cyanide to form in your body.

Allegedly, a 68kg human can safely eat 73 milligrams of cyanide every day before any negative effects begin.

Some believe that hydrogen cyanide is not heat-stable and will not survive being cooked, this is why some recipes call for the pits or seeds of stone fruits.

Cyanide is well-known for being deadly, and this is due to the way it affects the body.

It poisons the most basic units of life, the cells, depriving them of oxygen.

Without life-giving oxygen, the cells suffer.

The severity of the symptoms depends on how much exposure there has been, and the form of cyanide.

The greater the exposure, the more severe the symptoms.

The amygdalin that is found in plum seeds is a naturally occurring compound.

Because plum seeds are fairly bigger than apple seeds for example, which also contain amygdalin, they pose a slightly bigger risk.

Not a risk big enough to worry about as long as you do not spend your days consuming tons of plum seeds.

Is it OK to swallow plum seeds?

Yes, as long as you do not swallow too many.

Swallowing them whole will cause much less harm than chewing or crushing the seeds as this then releases the amygdalin, which turns into cyanide.

Swallowing a plum seed is relatively safer than crushing or chewing the seed and then eating it.

This is because the amygdalin is contained inside the seed.

Only when cracked open does the amygdalin threaten to cause any harm.

As mentioned above, however, you would need to eat a ton of these seeds to feel the ill effects.

The seeds of green plums contain the most amount of amygdalin.

The human body is able to handle a small amount of the compound due to the digestive enzymes in the body which help to safely dispel it.

If you consumed large amounts of amygdalin, however, you will likely find yourself suffering.

It is important to bear in mind that the size of an individual is a factor in how many amygdalin-containing seeds or pits they can consume.

Ensure that you keep this in mind, but to stay on the safe side, it is best to avoid consuming the seeds as much as possible.

An accidental swallow won’t cause major harm, so you don’t need to worry if this does happen.

Other stone fruits that contain amygdalin in the seeds include peaches, apricots, cherries, and nectarines.

Stone fruits have the characteristic of having a single seed in the middle of the fruit surrounded by the flesh.

A cling plum has flesh that sticks well to the pit and freestones are plums that have flesh that is easily removed from the stone.

Freestone plums tend to be used for jams, jellies, etc as it is easier to remove the seed.

They tend to be juicier and sweeter and are easy to chop up.

Clingstone fruits are usually larger, and the juiciness of it makes them better for use in sauces.

Some plums are a combination of both.

Plum seeds can also be toxic for dogs, especially for smaller dogs.

In the same way that the amygdalin turns into hydrogen cyanide in humans, it has the same effect in dogs.

Dogs may also be more likely to chew up the seeds, releasing the cyanide-causing compound.

Prevent your dogs from ingesting plum seeds although the flesh is fairly safe for them to eat.

There are some amounts of amygdalin in other parts of the plum, so if your dog consumes a lot of stone fruits, you might want to limit this.

The seed can also cause a blockage in a dog’s intestine especially if they are fairly small, and the seed is larger than their intestine.

If there is an intestinal blockage this could cause more severe issues and surgery may be required.

They could also damage or break their teeth from chewing the seed.

Plum seeds are not the smallest seeds around, so there is a risk factor of choking here.

It’s certainly not a good idea to always swallow the seed every time you eat a plum as it could go down the wrong way or get stuck.

Can you poop out a plum seed? 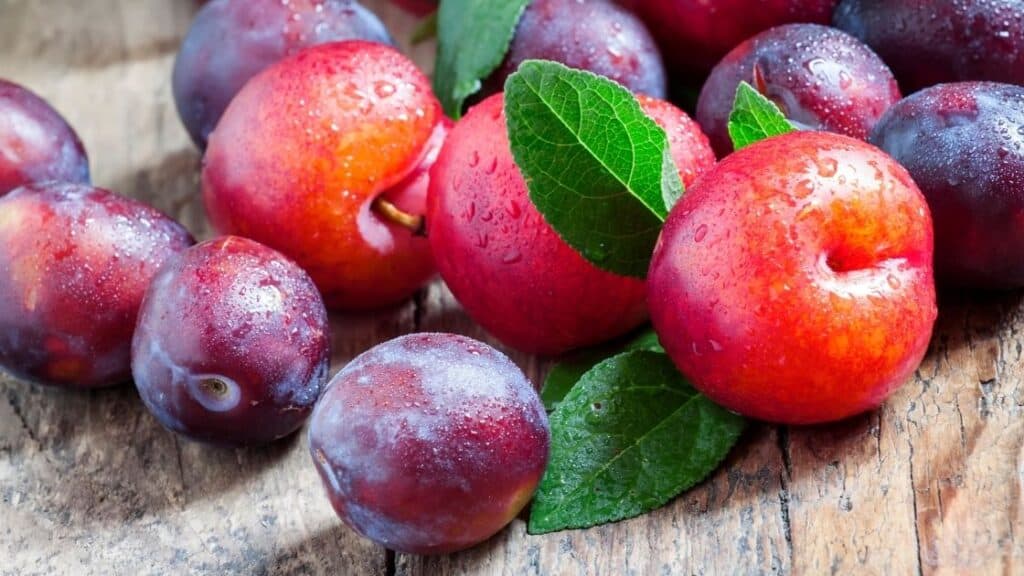 Yes, you can. It may take longer than usual especially is swallowed whole however plum seeds will usually digest as normal.

You might find that you excrete the plum seed whole or during the digestive process, it may have broken down.

Plum seeds are fairly small and should not cause any trouble if they are swallowed.

If you do accidentally swallow a plum seed, don’t fear too much, your body can handle it and will be able to poop it out.

Depending on your digestive and gut health, you might experience some abdominal discomfort.

If you do swallow a plum seed, and begin to experience severe discomfort or pain, you should seek medical attention.

It could be an indication of cyanide poisoning although fairly unlikely.

Plum seeds are fairly thick, and so unless you chew them whilst eating, it is unlikely that the amygdalin is released.

Sometimes, during the process of digestion, the seed may become partially broken down.

Although of course, any cyanide of this amount can easily be removed from your system without causing any harm.

Pooping helps to remove any small amounts of cyanide in the system.

How long does it take to poop out a plum seed? 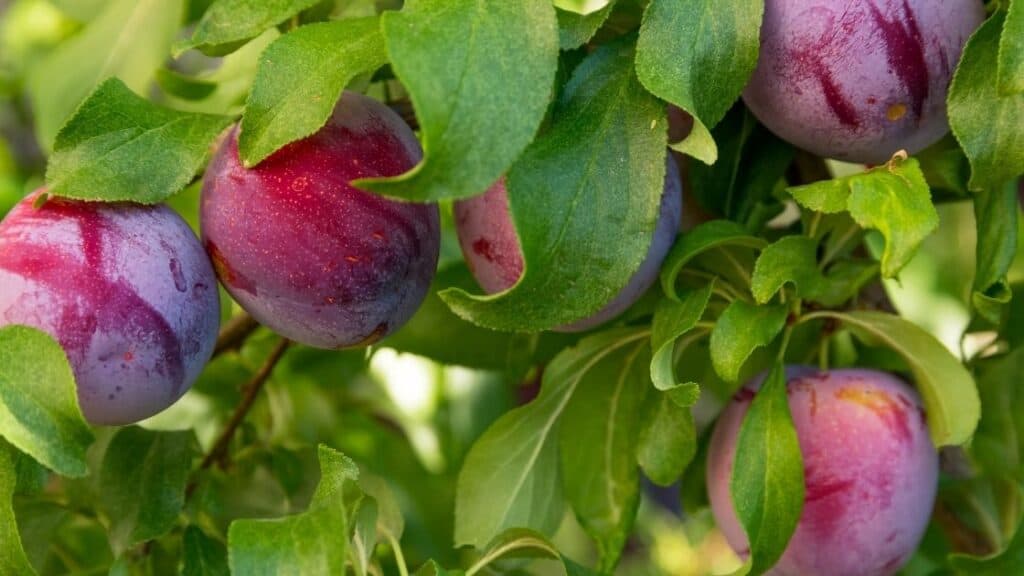 It could take anywhere from a few hours to a few days.

One plum seed won’t cause any major harm so there’s no need to worry.

For babies or dogs, there is a little more worry due to the size, however, it is unlikely to cause a major obstruction so it is best to wait for the digestive system to excrete it out.

If you have swallowed or eaten a plum seed and are worried, don’t fret too much as they will leave the body shortly.

There is a little more room for worry here as they are so small that the seed could get stuck.

However, as long as the seed has gone to the stomach, it will be pooped out shortly.

Babies and young children can easily choke on the plum seeds, which is why it is important to model to them that they should never be eaten.

However, once it has occurred keep an eye out for anything that indicates they are suffering from stomach pain or digestive distress.

In the case of this, seek medical attention.

Aside from the cyanide worries, an issue could be that the seed gets stuck in its small digestive system.

As for adults, there are fewer worries as one plum seed is unlikely to cause any major problems.

It should take anywhere from a few hours to a few days.

If your digestion is fairly healthy, the seed should be digested fairly quickly.

If you struggle with digestion issues, it may cause some issues for you in the stomach, and cause stomach pains.

For dogs it can take them anywhere from 10-24 hours to digest a rock, a plum seed is a similar makeup and may take around this time as well.

How many plum pits are toxic to humans? 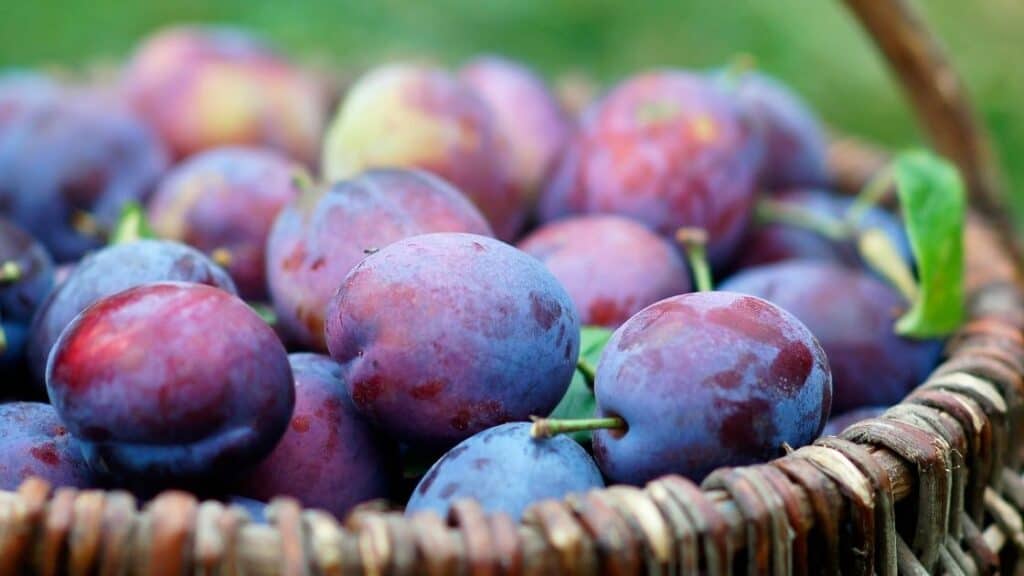 Hydrogen cyanide becomes toxic at around 1.52 milligrams per kilogram.

One plum pit contains 9 mg of cyanide, so it depends on each individual’s body weight.

This is why it is important to prevent babies and younger children from consuming plum seeds, aside from just the choking hazard.

Poisoning is of course highly unlikely, but it is still possible in large amounts.

It is important to be aware of this in case you or your child one day get a sudden craving for plums and eat a bunch in one sitting.

There are very minute amounts of amygdalin in the flesh of the fruit itself, but this is completely harmless.

Avoid intentionally consuming plum seeds to stay on the safe side.

It isn’t just a housewives tale, whilst consuming plum seeds may not grow a plum tree in your stomach, it could lead to ill effects due to the amygdalin contained in the seed.

This amygdalin is a compound that when ingested turns into hydrogen cyanide in the body.

Hydrogen cyanide can be lethal in high diseases and is toxic to the human body.

In small doses, however, it is relatively harmless as the body can easily excrete it out.

Eating a plum seed may mean some difficulty with digesting especially if you have digestive issues.