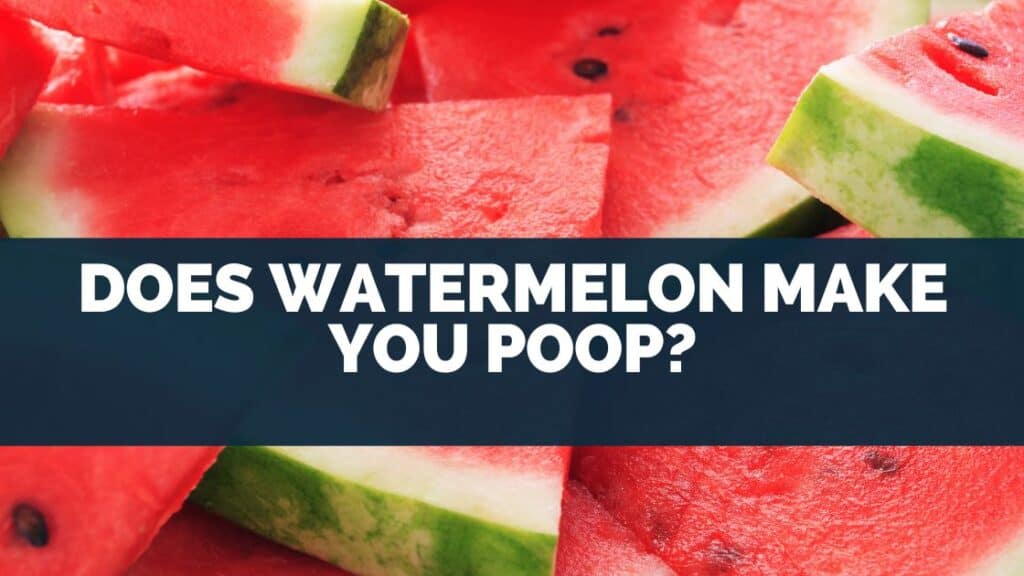 You probably enjoy eating watermelons because of how tasty they are.

Lots of people do, especially during the heat of summer!

Not only is watermelon tasty, but it also has very few calories and lots of nutrients.

One thing it doesn’t contain much of though is dietary fiber – the indigestible portion of plant foods that tends to make you poop.

But even though watermelon isn’t rich in fiber, it has other properties which encourage bowel movement, like containing loads of water.

Watermelon is 92% water, which makes it mostly water and only 8% of actual fruit.

This high water content is what makes it such a perfect fruit for summertime.

Eating watermelons provides a cooling effect to battle summertime heat and is also a great way to stay hydrated.

This happens because water helps keep things moving fluidly through your digestive system.

If your body doesn’t have enough water, it will attempt to reduce water loss by pulling water from the stool it is creating.

This can lead to issues such as constipation.

Eating watermelon prevents this from happening and instead, causes you to poop.

Another property of watermelon that causes you to poop is some of the nutrients that it contains.

While watermelon is mostly water, the small percentage that is actual fruit is packed full of nutrients, like a type of carbohydrate called sorbitol, a known laxative.

Sorbitol is a sugar alcohol with a sweet taste that is often used as a sugar substitute.

It is about 60% as sweet as sucrose and has a lower calorie content.

Sorbitol occurs naturally in some fruits like watermelons and berries and is also produced commercially from glucose.

Sorbitol has a laxative effect when consumed in large amounts, and so it is sometimes used as a treatment for constipation.

It can also be used as an artificial sweetener in diabetic foods, or as a Sugar Alcohol In Syrup (SAIS) to prevent dental cavities.

Sorbitol is safe for most people to consume, but those with fructose intolerance should avoid it as it can cause gastrointestinal distress.

Go to top
Table Of Contents hide
1 Why Do I Poop When I Eat Watermelon?
2 Does Watermelon Cause Diarrhea?
3 Can Eating Too Much Watermelon Make You Poop?

Why Do I Poop When I Eat Watermelon? 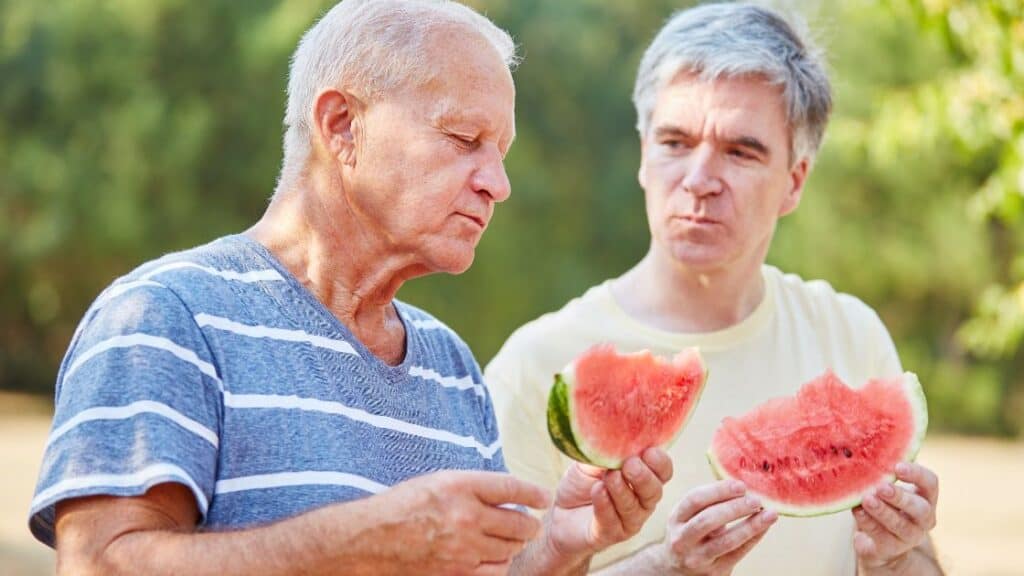 Watermelon is a fun fruit and tasty fruit to eat.

There’s nothing like a cold slice of watermelon on a sunny hot summer afternoon.

But if you plan to eat a lot of watermelons, you may want to make sure there is a toilet nearby because watermelons can make you poop.

The major reason why watermelon makes you poop is because of its high water content.

As the name so aptly implies, watermelon contains mainly water.

To be more specific, this fruit is about 92% water. Such a high water content is great for the summertime heat.

It is refreshing and hydrating, but it also encourages bowel movement.

What this means is that, because of the water in watermelon, the flow of stuff through your digestive system is smooth and easy.

If your body is dehydrated, one of the ways it tries to stay hydrated is by adding water to the digestive system.

Constipation is a common problem that can be caused by a number of factors, including dehydration.

When the body doesn’t have enough fluids, it starts to pull water from the intestine, resulting in hard, dry stools.

This can lead to pain and bloating, as well as the feeling that you need to strain during bowel movements.

Watermelon prevents this from happening because it contains a lot of water.

Instead, the reverse occurs. As you eat watermelon, your body is hydrated.

Because of this, your digestive tract doesn’t need to pull water from the stool.

Movement through the digestive tract is easy and unhindered.

And before you know it, you feel like pooping.

Another reason watermelon makes you poop is that it contains sugars named mannitol and sorbitol.

While these substances are beneficial to health, one of their side effects is that they can cause you to pass loose, watery stools, especially when consumed in large amounts.

Lycopene is another substance that is abundant in watermelon that can make you poop.

Lycopene is an antioxidant that gives watermelon its red color.

While lycopene is healthy, taking too much of this substance can cause you to poop.

Does Watermelon Cause Diarrhea? 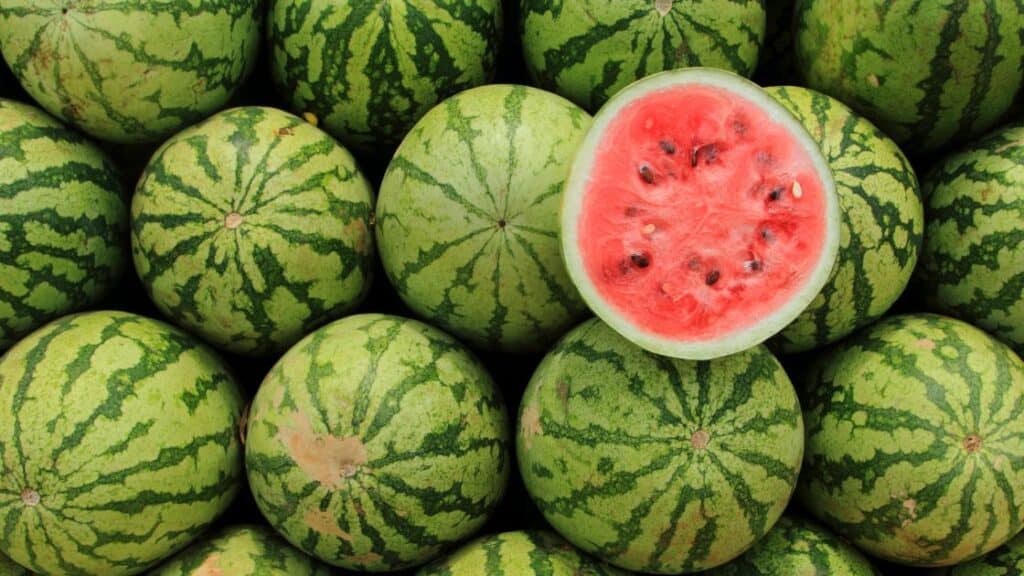 Watermelon is one fruit that is almost synonymous with summertime.

What’s a hot summer day out without a cold slice of watermelon?

However, like eating anything in excess, eating too much watermelon can cause diarrhea.

While an uncommon side effort of the fruit, it only occurs when you’ve eaten too much of it.

A recommended serving of watermelon is about 100 to 150 grams per day.

This comes to approximately one cup of fruit.

If you want to push it a bit further, 300 grams of watermelon is a good place to stop.

More than this and you’re likely to come down with side effects such as bloating, gas, and yes, diarrhea too.

It is easy to go overboard with eating watermelons.

They are fun to eat and taste great, perfect for staying hydrated and cooling down on a hot day.

What’s more, watermelon is a very healthy fruit. It is low in calories and fat and packed full of nutrients.

Not to mention, it is relatively affordable and readily available.

All these make it easy to eat slice after slice of watermelon without the accompanying guilt that often comes with binge-eating other foods.

Another thing that makes it easy to overeat watermelons is that it doesn’t have much fiber, carbs, or proteins.

It is mostly just water, so it isn’t particularly filling.

One way you can prevent getting diarrhea from watermelon is by pairing the fruit with something more filling, so you don’t end up eating so much of it.

One great option is plain yogurt, nuts, or some granola for added fiber and taste.

Can Eating Too Much Watermelon Make You Poop? 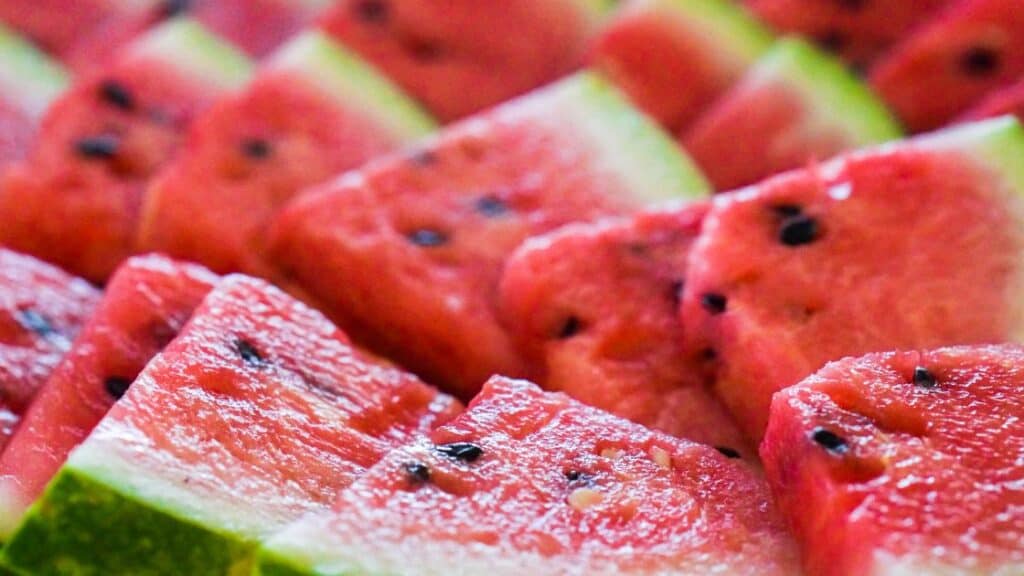 It’s remarkably easy to binge eat watermelons, especially during a hot summer day by the pool or on the beach.

However, eating too much watermelon can make you poop due to the high content of water in the fruit, as well as the presence of natural sugars like sorbitol.

Exactly how much watermelon exactly is too much? Well, health experts and nutritionists recommend that you don’t go above 300 grams of watermelon per day, which comes to about 2 cups of fruit.

Watermelon is an incredibly healthy fruit.

It is low in calories and has almost zero fat, with plenty of nutrients such as vitamins A, B, and C. Watermelons contain minerals like potassium which is good for your heart health and blood pressure control.

This fruit is also a great source of beneficial substances like citrulline which helps your body get rid of harmful substances such as ammonia.

Lycopene is another great substance found in watermelons, a powerful antioxidant with a myriad of health benefits such as protection from UV rays and protection from cancer.

Antioxidants are substances that can prevent or slow damage to cells caused by free radicals, unstable molecules that the body produces as a response to environmental and other pressures.

Free radicals can cause cell damage that may lead to cancer.

Antioxidants work by scavenging free radicals and preventing them from causing damage.

Some examples of antioxidants are vitamins C and E, beta-carotene, and lycopene.