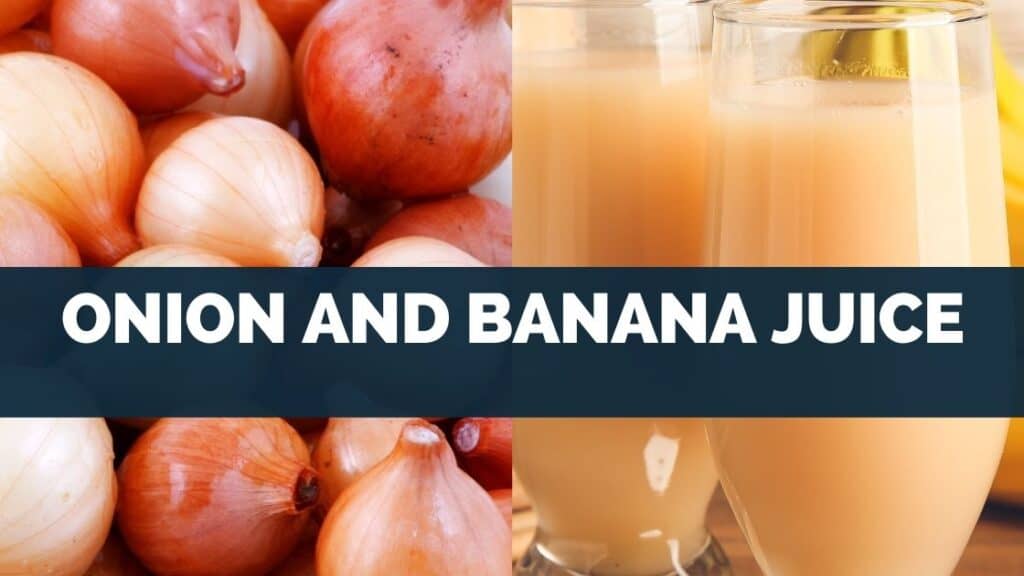 There are many unlikely food combinations, a common one is an onion and any kind of sweet food.

Juicing fruits is a refreshing and typically delicious way to consume fruits and vegetables.

Today I will take a look at onion and banana juice and whether it’s any good.

Onion and banana juice has a very bad flavor.

Raw onion has a very strong flavor that is only good in small amounts and mixed with other savory vegetables.

The initial taste you get from this drink is a pleasant banana flavor.

But, then the onion taste hits you which is very unpleasant.

The water content in bananas is tightly bound to the flesh so when you juice them all you get is banana mush.

Therefore, they typically aren’t juiced and instead are blended with other juices to form a thick smoothie.

Onions can easily be juiced but onions are quite acidic which can cause minor chemical reactions with other foods.

Can I Mix Banana and Onion Juice? 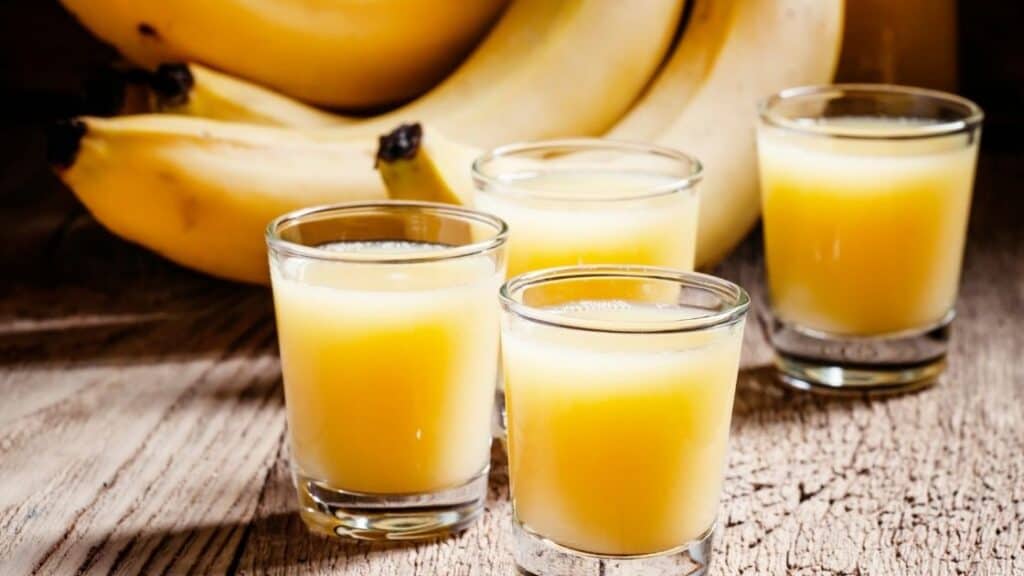 Bananas are almost always added to fruit smoothies as they add a really good taste.

Onion can be added to vegetable juices but generally only tastes good in small amounts.

Here’s whether you can add banana to onion juice.

It’s fine to mix banana and onion juice but it tastes very bad.

It can then be mixed with onion juice.

Bananas can also be liquified in a blender with onion juice.

There is a somewhat popular Anime series called Avatar: The Last Airbender.

In one of the episodes, the main character goes to see a monk and is given onion and banana juice to open up his chakras.

This has become somewhat of an iconic scene and some people have been tempted to try it to see what it does.

Here’s the scene from the anime series:

The consensus is that it tastes very bad.

But, the onion juice has the effect of clearing out your sinuses and stinging your throat.

Much like what happens if you put too much wasabi on your sushi.

Here are some quotes from people who tasted it:

“You know the feeling that you get in your eyes when you’re chopping onions, it feels like tiny spores are attacking you. It’s the same way when you drink it, but in your mouth.”

It’s fairly clear this is a comical scene from the anime and not something that is particularly good at opening your chakras.

The 2 different ways to make onion and banana juice

When you put bananas through a juicer you get banana mush rather than juice.

But, the juice of bananas can be extracted using amylase.

Here’s a video made by a chef that shows how it’s done:

You could juice the onions separated in a juicer, and use banana juice extracted using the method above.

Then mix them together in a blender, a drink shaker, or in a cup with a spoon.

The other option is to make some onion juice and then blend it together with some bananas.

Instead of onion juice, you can use onion powder which is very finely ground and dried onion similar to ground turmeric or cinnamon.

Using either will produce an onion and banana smoothie.

But, either way, you make it almost everyone says it tastes terrible.

If you don’t use onion powder much you may be interested in how much onion powder to use instead of onions in recipes.

I explained the answer to this question in this article about how much onion powder equals one onion.

This will also help you when trying to work out how much onion powder to use instead of onion juice.

It’s not so much the mixture of onions and bananas but the taste of onion juice on its own.

Raw onion can be added to salads, and sandwiches and is very delicious.

However, this is only when it’s combined with other savory vegetables such as tomatoes, lettuce, and cucumber.

When onions are combined with sweet foods the flavor just doesn’t work. 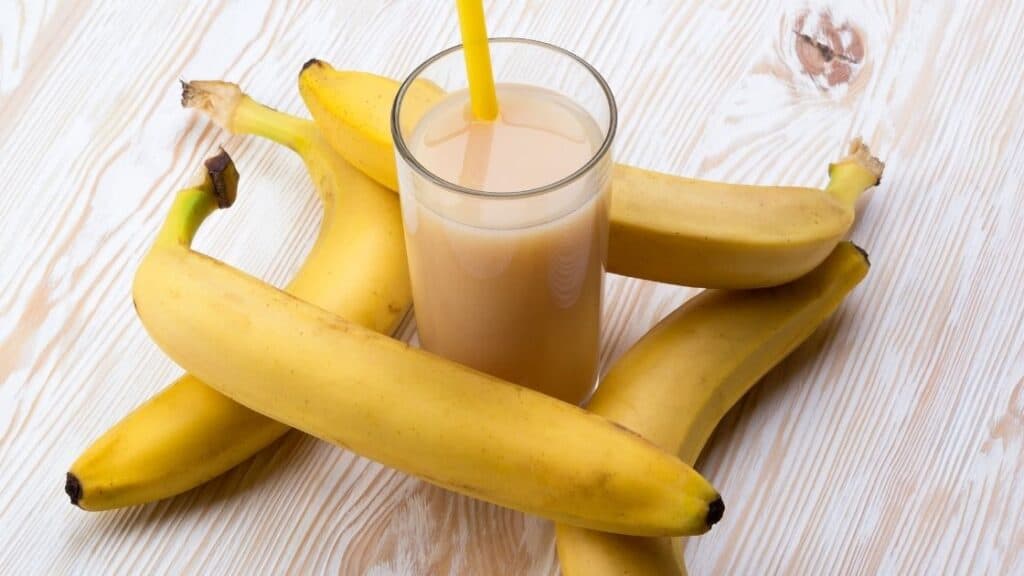 Fruits and vegetables are generally considered to be healthy, and it’s recommended to include 5 or more in your diet every day.

Each fruit and vegetable has a unique amount of each nutrient, so below I thought I’d summarize the benefits of consuming onion and banana juice

Onion and banana juice is high in vitamin C, vitamin B-6, magnesium, and manganese.

It also contains a fair amount of other beneficial vitamins and minerals.

However, you can get the same benefits from onion and banana juice by consuming onions and bananas separately.

Here’s a table that shows a side by side comparison of the nutrients in onions and bananas based on the recommended daily intake (RDI).

When you juice fruits and vegetables the juice contains almost exactly the same nutrients as the fruit or vegetable itself.

The only difference is the juice contains 10% of the fiber of the fruit or vegetable.

The nutrients that are high in onions are vitamin C, and vitamin B-6.

And the nutrients found in high amounts in bananas are potassium, manganese, and vitamin B-6.

Therefore, if you combine onions and bananas it’s a great way to get a high amount of vitamin B-6, which has a range of health benefits according to medical professionals.

But, because the taste of the combination of bananas and onions is very bad, it’s best to consume them normally.

The reason is there are no known benefits to consuming bananas and onions at the same time, either the whole fruit or vegetable or the juice.

Onions contain sulfur which contributes a lot to the very strong taste.

Most fruits and vegetables can contain some sulfur as it’s present in the soil which the plant uptakes.

But, some are higher in others. I covered how much is found in onions in this article about whether onions are high in sulfur.

It also shows how much sulfur is found in other fruits and vegetables, as well as common foods like meat and eggs.

Is Onion and Banana Juice a Real Thing? 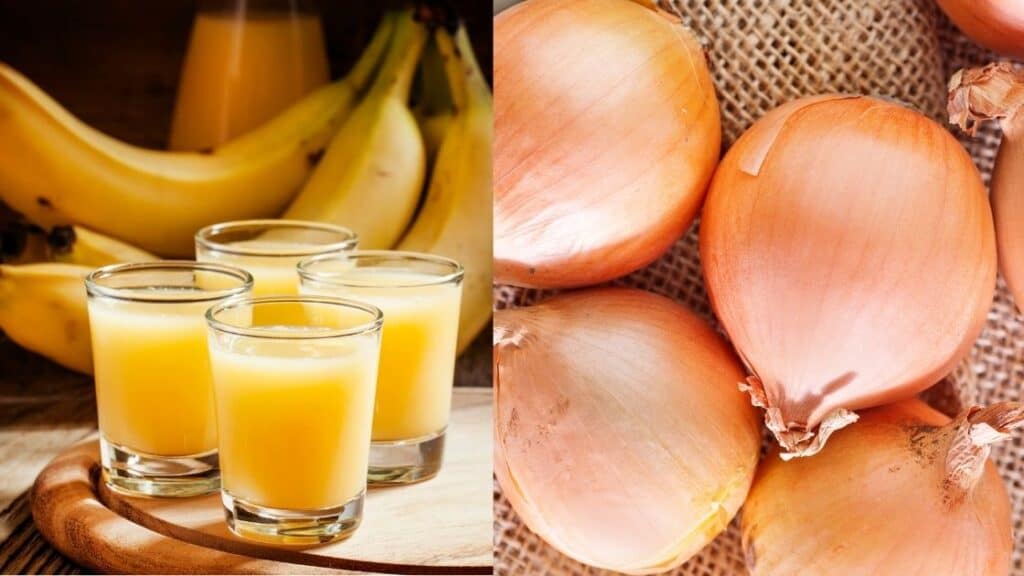 Some food combinations that you wouldn’t think wouldn’t taste good together are surprisingly good.

Onion and bananas are probably the last two foods you’d think about combining, especially as a juice.

However, is onion and banana juice commonly consumed, and is it actually a thing?

Onion and banana juice is not a real thing.

It’s rarely consumed by anyone, and not part of any unique diet, or cultural or spiritual practice.

It also has no unique benefits that you can’t get by consuming the juice of each on its own.

Apart from its feature in the popular anime Avatar: The Last Airbender there is no known occurrence of this particular mix of fruit and vegetable juice.

In my opinion, the main reason is it tastes very bad.

Onion juice only tastes good when added in small amounts to vegetable juice.