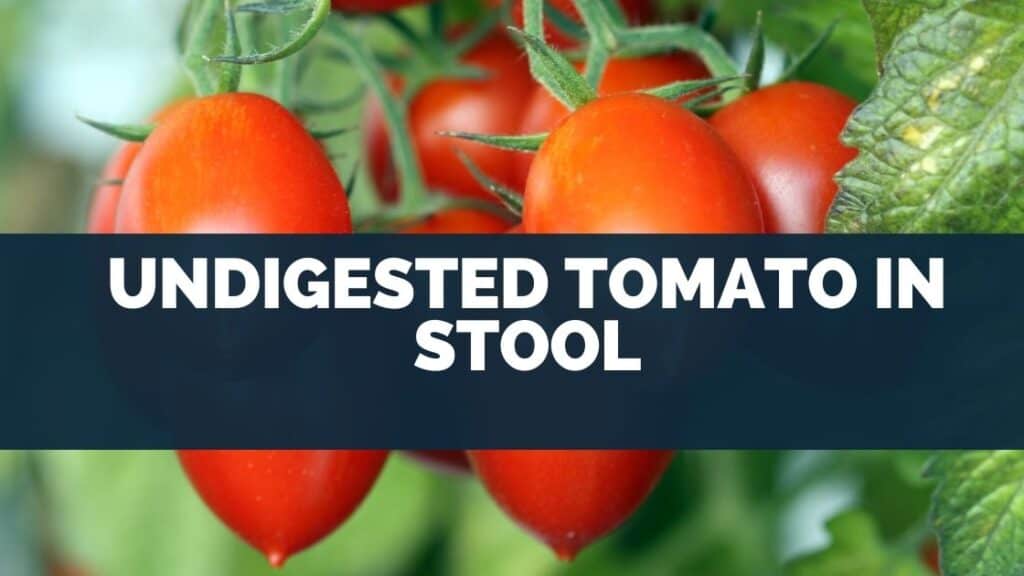 Often after you go to the bathroom you’ll automatically observe your stool when you go to flush.

A cursory glance can reveal pieces of tomato, and discoloration.

The appearance of your stool will reveal how good your diet is, but today I will explain what to make of undigested tomato in your stool.

Undigested tomato in your stool is perfectly normal, especially the skin.

The skin of tomatoes as well as other vegetables such as bell peppers (capsicum) doesn’t break down completely in the digestive acids in your stomach.

Therefore, it will generally come out of your body whole.

Tomato skin will generally come out the same as how it was when you swallowed it.

Such as if, if you diced the tomatoes into wedges, or chewed them thoroughly turning the skin into very small pieces.

Below, I will explain whether tomatoes are bad for your stomach, and digestive system, and whether it’s bad to eat a lot of tomatoes.

Are Tomatoes Bad for Your Gut? 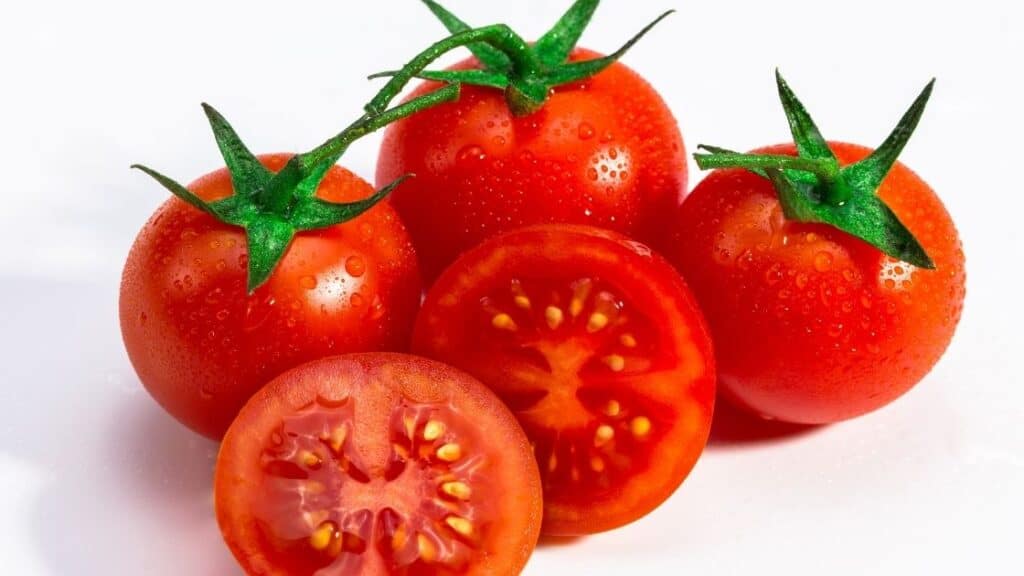 If you experience an upset stomach, bloating, or gas it’s often a bit tricky to figure exactly what caused the issue.

To cross tomatoes off the list of potential causes, here’s whether tomatoes are bad for your gut.

Tomatoes are not bad for your gut.

However, a small percentage of people experience gas and bloating from eating tomatoes.

This small percentage of people should avoid eating tomatoes or consume different varieties of tomatoes to identify if it’s only the type of tomatoes that is causing the issue.

For example, if you eat regular tomatoes and experience bloating or a lot of gas then try eating cherry tomatoes or plum tomatoes instead.

It might also be that the combination of tomatoes and other food produces an issue for you.

Experiencing Issues with your digestive system from eating tomatoes is limited to a small percentage of people.

And is largely genetic.

Similar to how some people are allergic to peanuts or gluten.

But, the vast majority have no issues at all with tomatoes.

This can be seen by looking at the data for the most popular fruits and vegetables.

Tomatoes are in the top 3 most consumed vegetables.

Although, technically they are fruit.

Therefore, if gas and bloating were a significant effect of eating tomatoes then it wouldn’t be as popular.

Tomatoes are particularly high in vitamin C which can cause diarrhea

A known effect of consuming more than the recommended daily intake of vitamin C is getting diarrhea.

Tomatoes are quite rare in the plant and vegetable world because they contain quite a high amount of vitamin C. Vitamin C is known to have a range of very good health benefits. 1 medium to large tomato contains about 20% of your recommended daily intake of vitamin C.

Therefore, if you eat 5 or more medium-sized tomatoes you can have an uncomfortable gut, as an effect of getting diarrhea from the high amounts of vitamin C.

Some people also eat green tomatoes, especially at the end of the tomato growing season when a tomato plant dies.

This is because the tomatoes can still be ripening on the plant when the plant dies, and therefore, you can have a bunch of green tomatoes.

Other times people will pick them green and use them in recipes.

But, you may be curious about whether you can eat green tomatoes raw.

I covered this in detail, as well as, some good ways to prepare them in this article eating green tomatoes raw.

Also, it takes 6 tomatoes to make about 1 cup of tomato juice.

So, if you drink two cups of tomato juice you’ll also be consuming around the recommended daily intake of vitamin C.

If you typically buy tomato juice, here’s a good video that shows how to make tomato juice at home:

When you combine that with other foods that can have vitamin C like oranges, and lemons you can get diarrhea.

So, a good rule of thumb is not to consume more than 1 cup of tomato juice per day.

And to consume less than 4 medium-sized tomatoes a day.

Also, be aware of other foods or supplements you could be taking that can have high amounts of vitamin C.

If you plan on drinking tomato juice or eating a fairly large amount of tomatoes.

It’s also important to note that everyone responds a bit differently to excess vitamin C.

It’s possible you might not respond negatively to more than the recommended daily intake of vitamin C.

As you may know, the slightly sour taste of tomatoes comes from the acids in them.

I did some research into studies that looked at how much of these acids are in tomatoes, and whether they contain amounts that can potentially be bad.

To see what I found check out this article about what acids are in tomatoes.

Are Tomatoes Bad for Your Stomach? 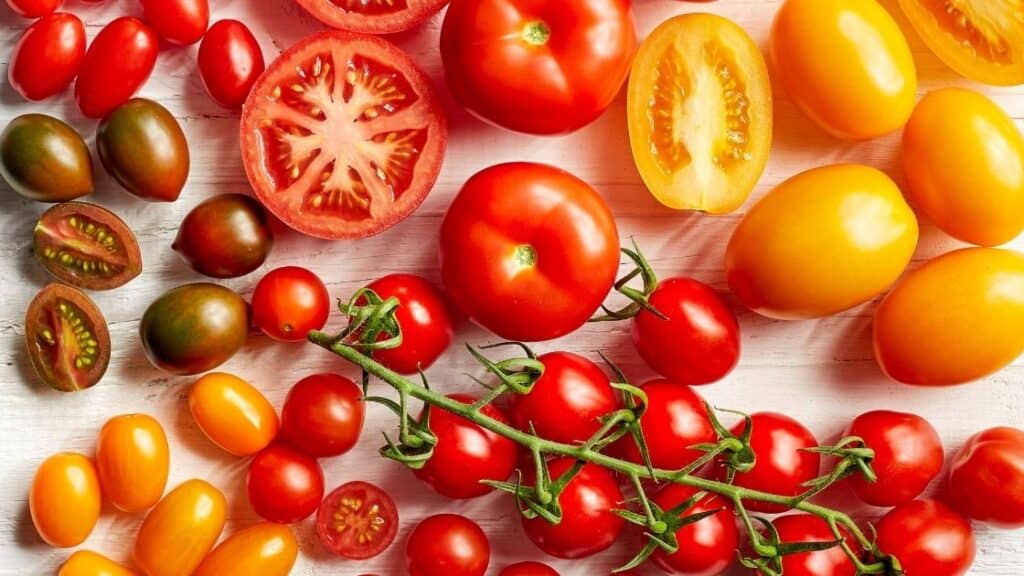 Certain foods should be consumed very rarely because they can cause stomach discomfort.

Tomatoes are not bad for your stomach.

But, a small percentage of people are allergic to tomatoes which give them gas and bloating when they eat tomatoes.

Tomatoes have a good amount of fiber – 8% of the RDI per medium-sized tomato, which is known to be good for digestive health.

Therefore, tomatoes are generally good for your stomach, and it will be very rare that tomatoes will give you an upset stomach.

All foods contain various chemicals, when you eat different foods together they can react and give you an uncomfortable stomach.

Therefore, it’s also possible that if you get an uncomfortable stomach from eating tomatoes it can be caused by combining them with another food.

So, it will take some trial and error to see what’s causing the issues.

Is It Bad to Eat Too Many Tomatoes? 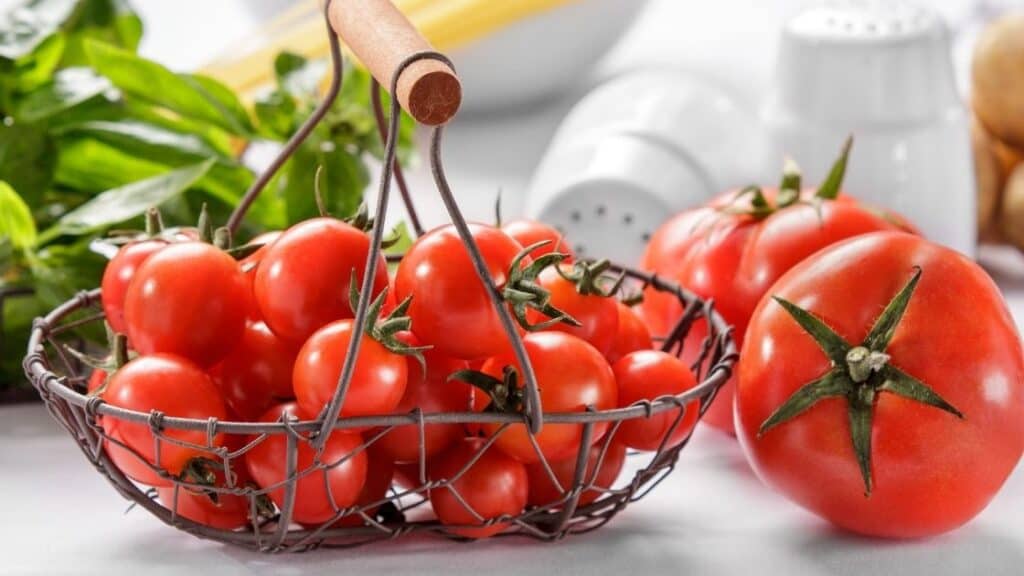 When you eat a lot of some foods you can get a negative reaction.

Whereas with others it’s fine to eat a lot of them, and you won’t experience any negative effects.

So, how about tomatoes, is it possible to eat too many tomatoes?

It’s not bad to eat too many tomatoes.

But, if you consume more than 5 medium-sized tomatoes you will generally get diarrhea.

It takes about 6 tomatoes to make one cup of tomato juice.

So, if you drink more than one cup of tomato juice you can also get diarrhea.

As a general rule, your body will tell you when you’ve eaten too many tomatoes by giving your diarrhea.

But, to be on the safe side as long as you eat a moderate amount of tomatoes – less than 5 a day, and don’t drink more than 1 cup of tomato juice, you won’t experience any ill effects from consuming tomatoes.

There are many nutrients in tomatoes that have many beneficial effects on your health.

Heirloom tomatoes tend to have natural folds in the skin, and as tomatoes ripen that can develop wrinkles.

Many people wonder if you should eat wrinkled tomatoes.

I explained the answer to that question in this article about whether you can eat wrinkled tomatoes.