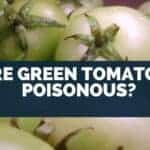 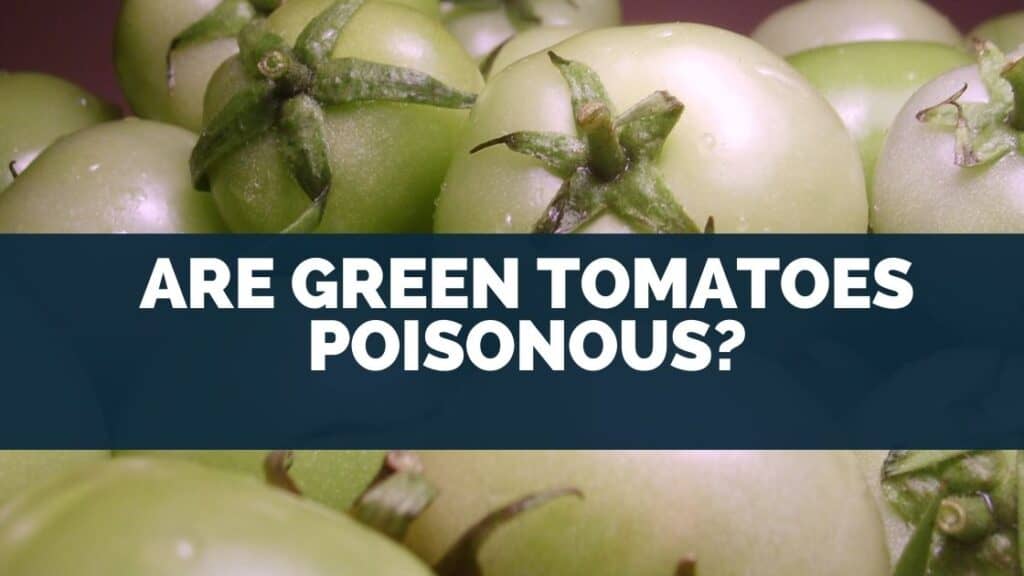 Tomato plants are annual and die during winter or the first frost.

They produce tomatoes right up until the plant dies, and because of that some of the tomatoes on the plant can still be green and they haven’t had time to ripen.

You also may be wanting to pick some tomatoes early to try out green tomatoes, so today I’ll explain whether green tomatoes are edible and whether they’re poisonous at all.

Green tomatoes are not poisonous.

They are commonly used as an ingredient in recipes, however, ripe tomatoes are more common.

They have a very similar flavor to ripe tomatoes except they aren’t as sweet, and have a firmer texture.

I typically don’t eat green tomatoes because they aren’t available in most stores, and I don’t grow my own tomatoes.

But, I was surprised to learn that many people eat them and really like them.

So, I did some thorough research into green tomatoes and below I will cover whether they are safe to eat, can they be cooked, as well as, whether it’s possible to get poisoning from green or ripe tomatoes.

Go to top
Table Of Contents hide
1 Are Raw Green Tomatoes Safe to Eat?
2 Do Green Tomatoes Have to Be Cooked?
2.1 Whether you can get sick from eating ripe or green tomatoes
3 Tomato Poisoning Symptoms 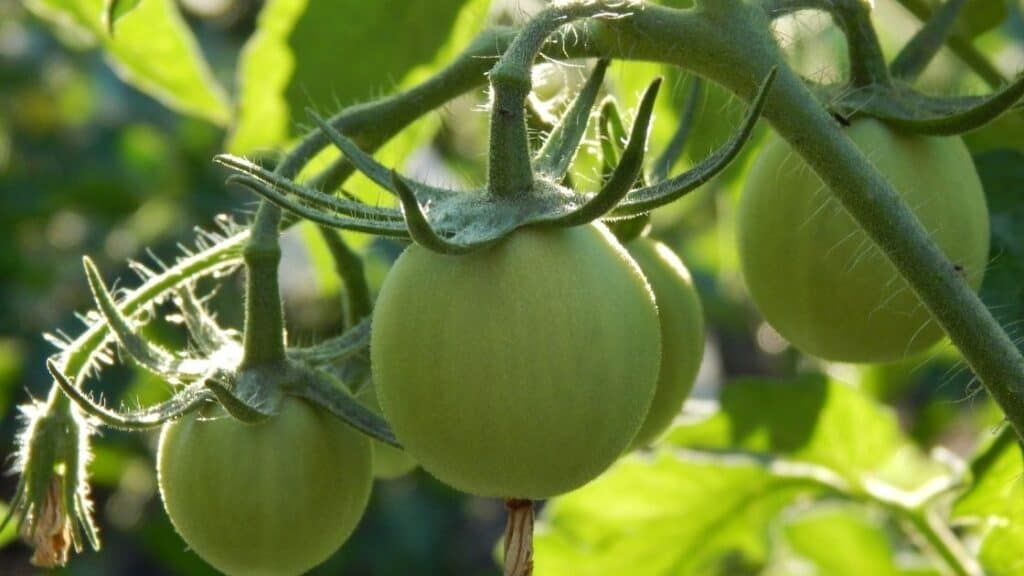 Raw ripe tomatoes are very commonly consumed on their own, in salads, and in sandwiches.

Raw green tomatoes are commonly used in salsas but can be used in any way you choose.

Raw they taste like tomatoes but are much more tart but in a good way.

There are no known negative health effects from eating raw green tomatoes.

They have a definite tartness to them and aren’t as pleasant and easy to eat as ripe tomatoes.

But, they still taste quite good and have a firmer texture.

They are particularly good when used to make:

If you keep them for long enough they will ripen and turn orange, yellow, or red depending on the variety.

When they have turned a paler shade of green they will ripen faster than if they are a deep dark green.

Their flavor will also be slightly different depending on how unripe they are.

The less ripe the more tart and firm they will be.

The most common way to prepare raw green tomatoes is to slice them, and add them to a salad, or to make them into a salsa which can be used with corn chips, or small pieces of different pieces of bread as finger food.

Another very common way to use green tomatoes is to cook them into a chutney.

Here’s a video that shows a great recipe for green tomato chutney which you can put on burgers, or on cooked meats such as steak, or chicken to add freshness, and help your body to digest the meat.

As well as, with cheese and bread, or cold meats:

Cooking green tomatoes removes a lot of the tartness, and makes them less sour.

However, at the end of the day, it’s up to you whether you decide to cook them, or prefer to use them raw.

Do Green Tomatoes Have to Be Cooked? 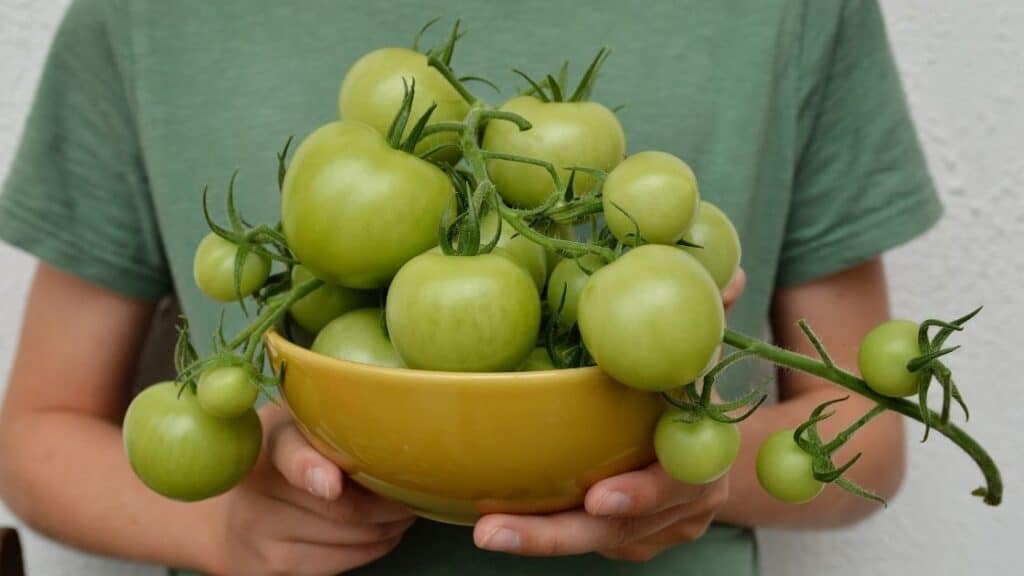 Certain foods are toxic if they aren’t cooked first.

Here’s whether green tomatoes can be eaten raw.

Green tomatoes do not need to be cooked.

Green tomatoes are perfectly safe to eat raw, and most people report they taste quite good.

They are sourer/tart-tasting than ripe tomatoes, so you may prefer to use less of them, or use them in different ways to ripe tomatoes.

Green tomatoes are definitely quite unique, they have the characteristic tomato flavor, have an almost crunchy texture, and have a bit of a tart kick to them but in a good way.

This makes them go very well in some dishes where you’d normally use tomatoes but not in others.

For example, green tomatoes can be cooked and used as the base for a pasta dish, like ripe tomatoes.

But, the entire dish has a much different flavor overall.

Like all vegetables, they are very versatile, and therefore, you can add them to a dish to provide depth to the flavor profile, or use them to replace other vegetables you would normally use such as cucumber or green peppers (capsicum), to keep your diet varied.

Fried green tomatoes are touted by many people as being one of the most delicious foods you can eat.

Although fried foods are generally not recommended by medical professionals because they have numerous adverse health effects, they are fine every now and then unless you have a pre-existing health condition such as diabetes.

Whether you can get sick from eating ripe or green tomatoes

You won’t ever get sick from eating tomatoes or get tomato poisoning provided you eat tomatoes in moderate amounts.

Tomatoes are particularly high in vitamin C, and if you consume more than the recommended daily intake of vitamin C it gives most people diarrhea.

The levels of vitamin C in tomatoes, mean that this only happens if you eat more than 2 cups of tomatoes in a day.

This generally isn’t possible if you eat tomatoes in your diet.

But, if you make or drink tomato juice it is definitely possible that you drink 2 cups which can give you diarrhea.

Some people have an intolerance towards tomatoes, but only affect a small percentage of people much like a peanut or soy allergy.

I explained this in more detail in this article about whether tomatoes cause gas and bloating.

You can get poisoning from tomatoes if the tomatoes have mold on them.

Some molds are toxic.

This isn’t something that’s unique to tomatoes but applies to all fruits and vegetables. 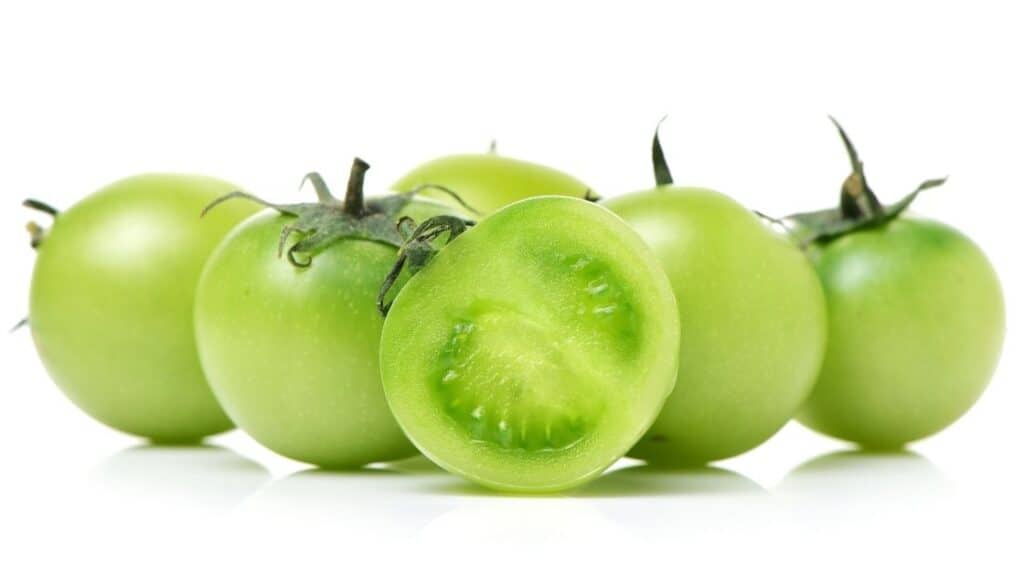 When this happens you will get the following symptoms:

Diarrhea, vomiting, headaches, nausea, and inability to focus are symptoms of tomato poisoning.

Tomatoes contain some lectin but not amounts that can cause symptoms unless all you eat is tomatoes for the whole day.

Certain moulds are toxic so it’s best to remove parts that are affected by mold.

The parts of tomatoes that contain the most lectin are the skin and seeds.

So, if for whatever reason – though generally not recommended – you want to go on a tomato fast you should remove the skin and seeds to reduce the risk of getting sick from the lectin found in tomatoes.

However, you’ll typically get diarrhea from the high levels of vitamin C, which will halt the progress of your tomato fast before you get sick from the lectin content in tomatoes.