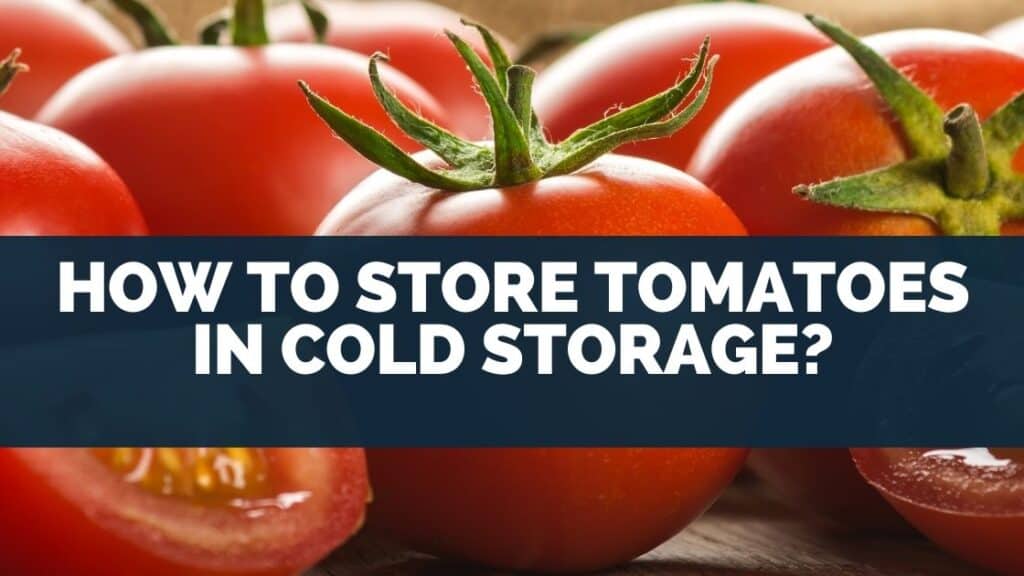 Tomatoes like most fruit will rot if left on the counter or pantry for a week or more.

This depends on how ripe they are when they were picked but there are some ways to store them for a long time, particularly in the freezer.

In this article, I will explain how to store tomatoes in cold storage.

When frozen tomatoes are defrosted they turn mushy so the texture isn’t very good raw.

Defrosted frozen tomatoes and are only suitable for sauces and soup-type recipes.

These are a range of different tips and tricks that have been found when putting tomatoes in the fridge, and in the freezer that makes them last longer and make them easier to use once you need to use them.

Generally, though a good rule of thumb is they will last the least amount of time on the counter, they’ll last longer in the fridge, and last the longest in the freezer.

Given these considerations below I will explain the best way to store tomatoes for each method.

Go to top
Table Of Contents show
1 What Is the Best Way to Store Tomatoes?
1.1 Tips for keeping them in the fridge so they taste the best
1.2 Drawbacks and benefits of freezing tomatoes
2 Is It Ok to Store Tomatoes in the Fridge?
3 How Do You Keep Tomatoes Fresh Longer?

What Is the Best Way to Store Tomatoes? 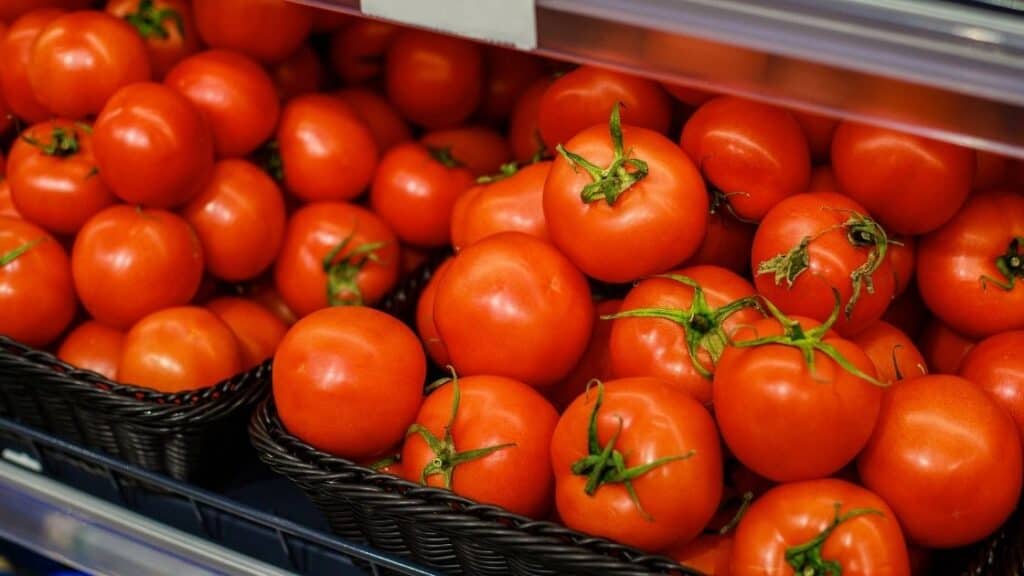 Tomatoes that are pale red will aren’t quite ripe and will last a lot longer than fully red tomatoes.

Green tomatoes will also ripen over a very long amount of time.

The best way to store tomatoes is to freeze because they can last around 3 to 6 months or more.

The next best way is to store them is in the fridge, this will slow down the ripening and rotting process.

The least best way is on the counter or pantry because they ripen the fastest.

The method you choose to use depends on:

If you plan on using them within 1 to 3 days keep them on the counter or in the pantry.

The reason is most people report they lose a bit of flavor when kept in the fridge.

The other issue can be if it’s summer time or if you live in a hot climate.

Warmer temperatures increase the rate at which tomatoes ripen.

Therefore, if it’s very hot in your kitchen you may want to pop them in the fridge even if you plan on using them in the next few days.

The cooler temperatures in the fridge slow down the ripening and eventual rotting of the tomatoes.

As you may remember from chemistry class, the colder the temperature the slower chemical reactions take place.

This has been explained by a physics term known as kinetic energy.

Essentially the atoms don’t vibrate as fast, which causes them to bump up against each other less, and so fewer chemical reactions occur.

Once tomatoes have been cut they are susceptible to bacteria and fungi which can cause food poisoning.

Cut tomatoes should be at a temperature of 5°C (41°F) according to the FDA.

Most household refrigerators are at this temperature.

All uncovered foods in the fridge give off odors.

These over time can flavor other foods in the fridge.

Therefore, you should keep tomatoes covered in zip lock bags or plastic containers.

The other main issue is they develop moisture as a small number of juices come out of the tomatoes.

This causes them to go a bit soggy so wrapping them in a paper towel will keep them fresher for longer.

Ideally, tomatoes should be kept at a temperature of 55° F (12° C),  according to Food Scientist Harold McGee.

This is quite a bit warmer than a normal fridge which is typically set to about 40° F (4° C).

It’s generally a bit impractical for a fridge to be much warmer than what it’s set to.

But, if it makes sense for you, raise the temperature of your fridge to the warmest cold setting it has.

Generally, it takes about 48 hours to completely equilibrate to the new temperature.

As long as it doesn’t negatively affect your other food, for example, your beers or wine are not cold enough, keep your fridge at a warmer temperature to keep tomatoes the freshest for the longest.

Drawbacks and benefits of freezing tomatoes

The most obvious benefit of freezing tomatoes is they last much longer, at a minimum about 12 times longer than keeping them in the fridge.

The main drawback is you can’t use them the same way you would raw tomatoes.

For example, using them in sandwiches, or salads.

Once defrosted they don’t hold their shape and turn to mush.

But, for making tomato sauce for pasta, pizza, or soups they work amazingly well.

Here’s a really good video that shows how to freeze them:

Canning is another good option but is a bit more of a lengthy process.

Some people wonder whether canned tomatoes are as healthy as raw or cooked tomatoes.

I did some research into this by doing a side by side comparison of the nutrients in both in this article about how long canned tomatoes last.

Is It Ok to Store Tomatoes in the Fridge? 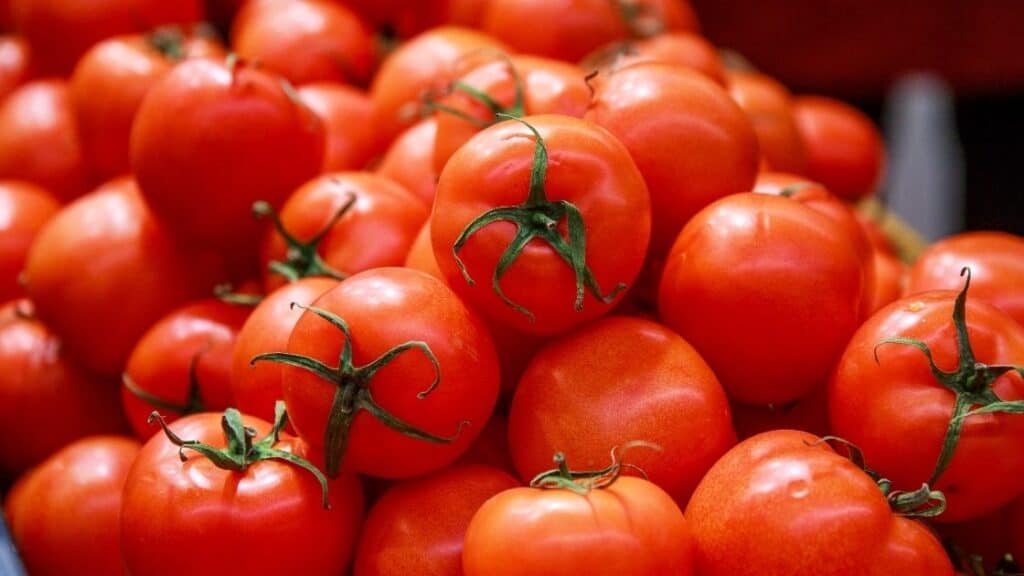 Popping some foods into the fridge is fine for most foods but for some foods, it isn’t always the best place to keep them.

Fresh fruits and vegetables tend to spoil pretty quickly, so is it ok to store tomatoes in the fridge?

It’s ok to store tomatoes in the fridge.

The cooler temperatures mean tomatoes last longer before they spoil in the fridge.

The best way to store them is on paper towels and covered.

This can be with plastic wrap, in a zip lock bag, or in a plastic container.

Depending on how ripe or unripe they are when you put them in the fridge they can last about 7 days.

If they’re pale red they will last quite a bit longer, but if they’re ripe they will start to go soft, and the skin will wrinkle after 7 days.

When the skin starts to wrinkle it’s typically a sign that they are starting to go bad or part of the tomato has gone bad.

How Do You Keep Tomatoes Fresh Longer? 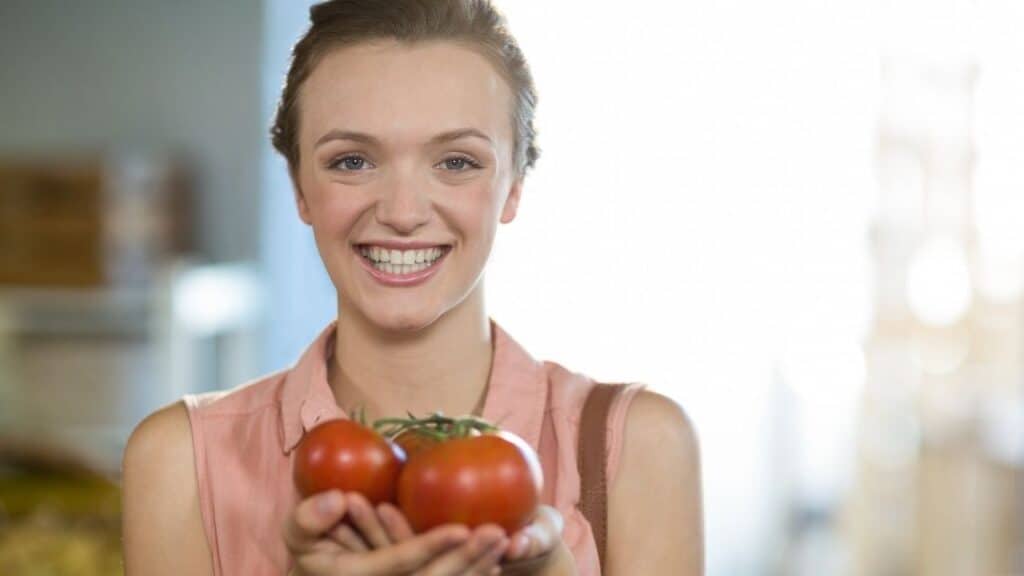 Ripe tomatoes go bad within 3 days or so even faster in warm weather.

Therefore many people have come up with ways to keep them fresher for longer.

Keeping them at a temperature of 55° F (12° C) is the ideal temperature to stop them from ripening and rotting.

But, also keep them away from other ripe fruits, and out of direct sunlight.

Tomatoes can be kept in the fridge which keeps them fresh longer.

They can also be frozen but they don’t defrost back to normal and turn into mush.

Otherwise, keep them at 55° F (12° C) where possible, and your next best option is to keep them in the fridge.